Accord was introduced in this country for 1976, and along with the Civic that had debuted three years earlier, helped establish Honda as a household name. And just five years after that, Accord made its mark as the first Japanese-branded car to be built entirely in the U.S.

As has been the case with many models, the Accord has gradually grown over the years. What started as a compact grew to a midsize over time, yet the 2018 model — due to go on sale later this month — actually shrinks just a bit, trimming a half-inch from overall length while gaining more than two inches in wheelbase, nearly all going to rear-seat legroom. At its current overall length of 192.1 inches, the 2018 Accord exactly matches the also-redesigned 2018 Toyota Camry, and both are just a hair longer than the Nissan Altima.

The 2018 Accord gets new C-shaped taillights along with rear quarter windows that aid the view when backing.

Although traditional Accord styling themes remain at the front, the rear adopts C-shaped taillights similar to those worn by the Accord’s smaller sibling, the compact Civic. The profile also changes, sporting a taller nose, longer hood, less front overhang, and a sloping rear roofline with a coupe-like pillar treatment. And speaking of coupes, the Accord no longer offers one; the only bodystyle is a 4-door sedan.

Also new are the two main engines offered – significant, not only because it’s rare that a new design and new engines debut in the same year, but also that neither is anything like those they replace. However, a Hybrid returns with a largely carryover powertrain. 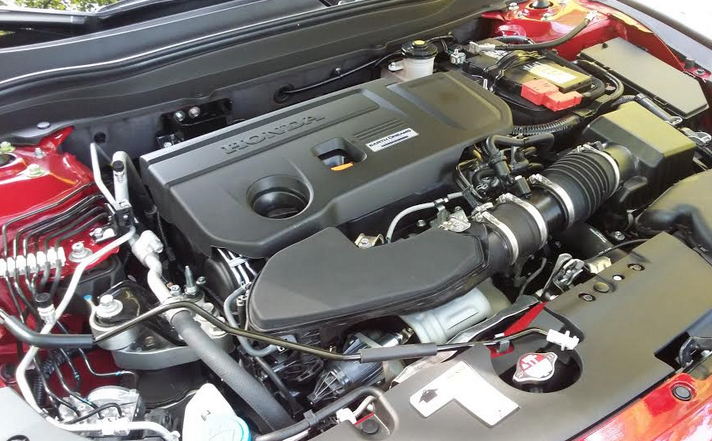 Both of the Accord’s new gas-engine powertrains use turbocharged 4-cylinder engines of either 1.5 or 2.0 liters, making 192 and 252 horsepower, respectively. Also available is a gas/electric hybrid powertrain.

Previously, Accord came standard with a 2.4-liter 4-cylinder engine rated at 185 horsepower (which the vast majority of buyers chose), with a 3.5-liter, 278-horsepower V6 optional. But for 2018, both of the gas engines offered are now turbocharged fours: a 1.5 liter producing 192 horsepower, and a 2.0 making 252. Meanwhile, the Hybrid returns with a non-turbo 2.0-liter four combined with two electric motors to produce a total of 212 horsepower. 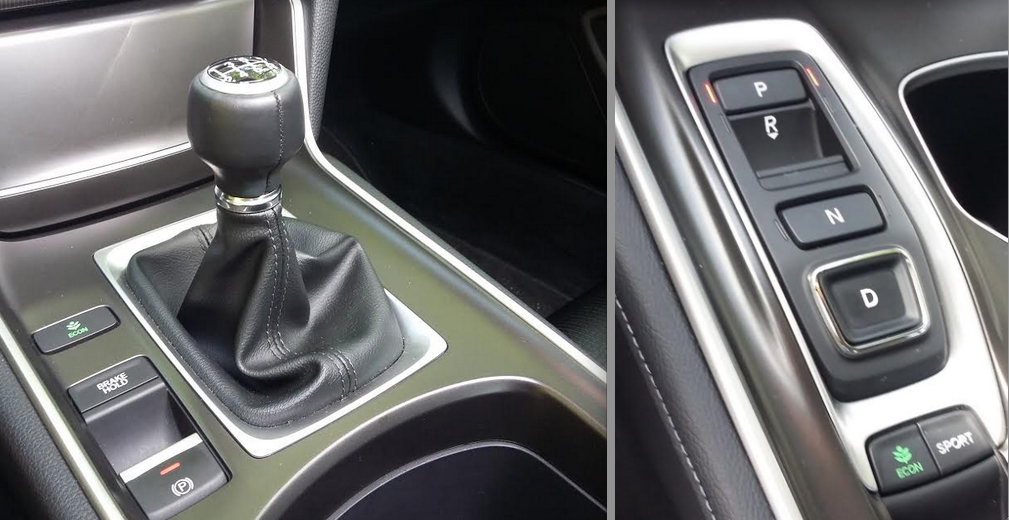 Both engines are available with a manual transmission (left), a rare offering in the midsize class. Those with the 2.0-liter four or the hybrid powertrain get a pushbutton console gear selector (right).

Bucking industry trends, both gas engines are available with a manual transmission – very rare in the midsize class. Of course, the vast majority of buyers will choose an automatic, which with the 1.5 liter is a CVT, while the 2.0 gets a new 10-speed automatic. All models are front-wheel drive. EPA fuel-economy figures for the 1.5-liter models are 26 city/35 highway/30 combined with manual transmission, 30/38/33 for the far-more-popular CVT automatic. Figures for the 2.0-liter models and Hybrids have not yet been released. 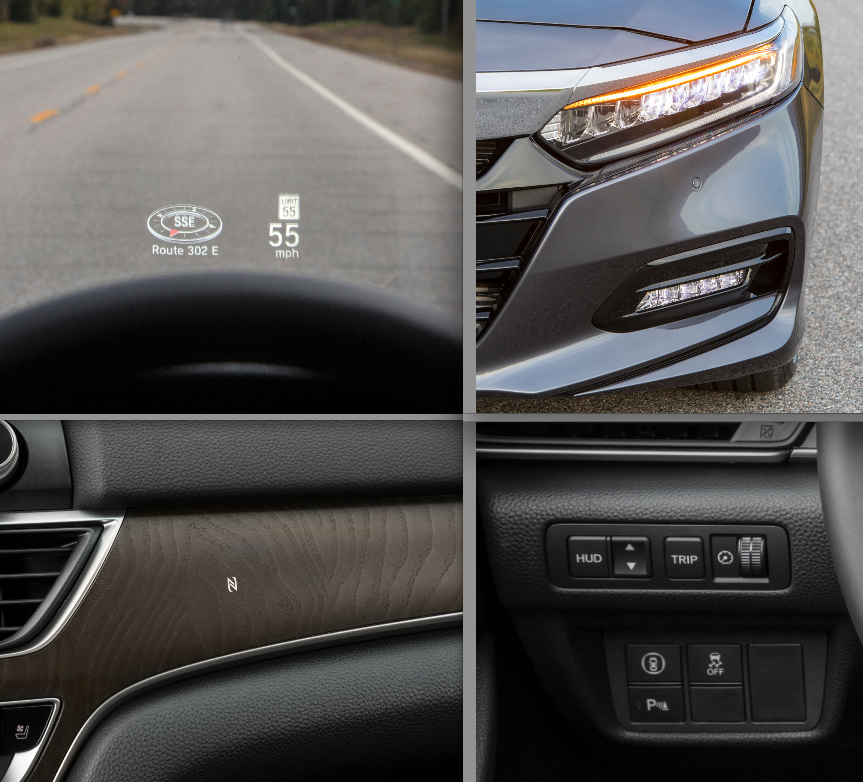 Some neat features of the 2018 Accord include (clockwise from top left), a head-up display, LED headlights, easy-to-use head-up-display adjustment/trip reset/instrument lighting adjustment, and Near Field Communication that allows you to pair some phones by simply tapping them against the little “N” on the dashboard.

As might be expected, the 2018 Accord boasts several newly available features. These include a 12-way power driver seat with lumbar adjustment, ventilated front seats (with carry-over heating), rear cross traffic alert, head-up display, 4G LTE Wi-Fi, wireless cell-phone charging, and phone pairing through Near Field Communication, which allows you to pair properly equipped mobile devices just by tapping them against a dashboard sensor. Also, the HondaLink telematics system now allows remote engine start. Dropped is LaneWatch, which automatically activated a right-side camera when the right turn signal was used.

But perhaps most notable is what’s standard. All Accords now come with the Honda Sensing suite of safety features, which last year was a $1000 option on lower-line models. And that suite is pretty sweet, as it includes forward collision warning and mitigation, lane-departure warning and mitigation, lane-keep assist, adaptive cruise control, and — new for 2018 — road-sign recognition. Also newly standard are an electronic parking brake with automatic brake hold (the latter useful when waiting in long lines) and variable-ratio steering. Furthermore, the base LX now comes standard with the CVT automatic transmission that was an $800 option last year, yet the price of entry has only gone up by $1115 to $24,445 (including the $875 destination charge), which makes it kind of a bargain. 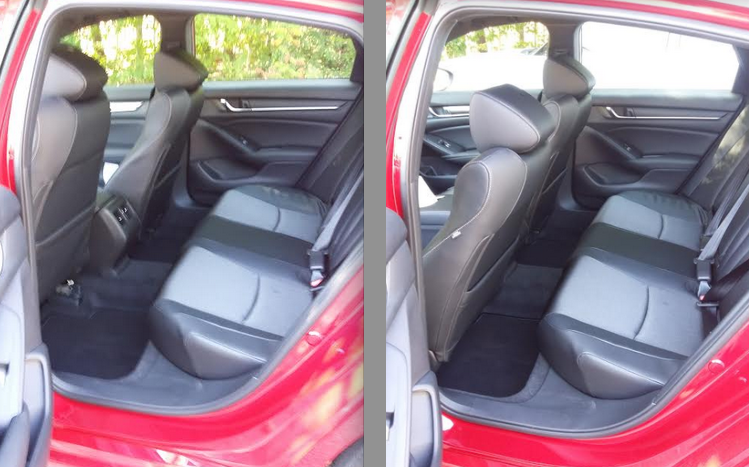 Although the 2017 Accord was plenty roomy in back, the 2018 takes rear-seat space to new heights – or perhaps more accurately, new lengths. Honda says there’s a whopping 40.4 inches of legroom back there; I say there’s limo-like space behind my 5’9 frame’s preferred front-seat setting. Furthermore, a 6-footer would find plenty of knee room even if the seat ahead is pushed all the way back, though that’s probably a back-seater’s height limit for comfortable headroom. In front, all but the tallest folks should find ample space.

Hondas have traditionally offered good visibility, and the new Accord is no exception. The cowl is lower and the front pillars are even thinner than before, and rear quarter windows aid the view when backing – which is further (and notably) aided by a standard wide-angle 180-degree rearview camera. Only to the sides could it be a bit better, but it’s pretty good nonetheless. 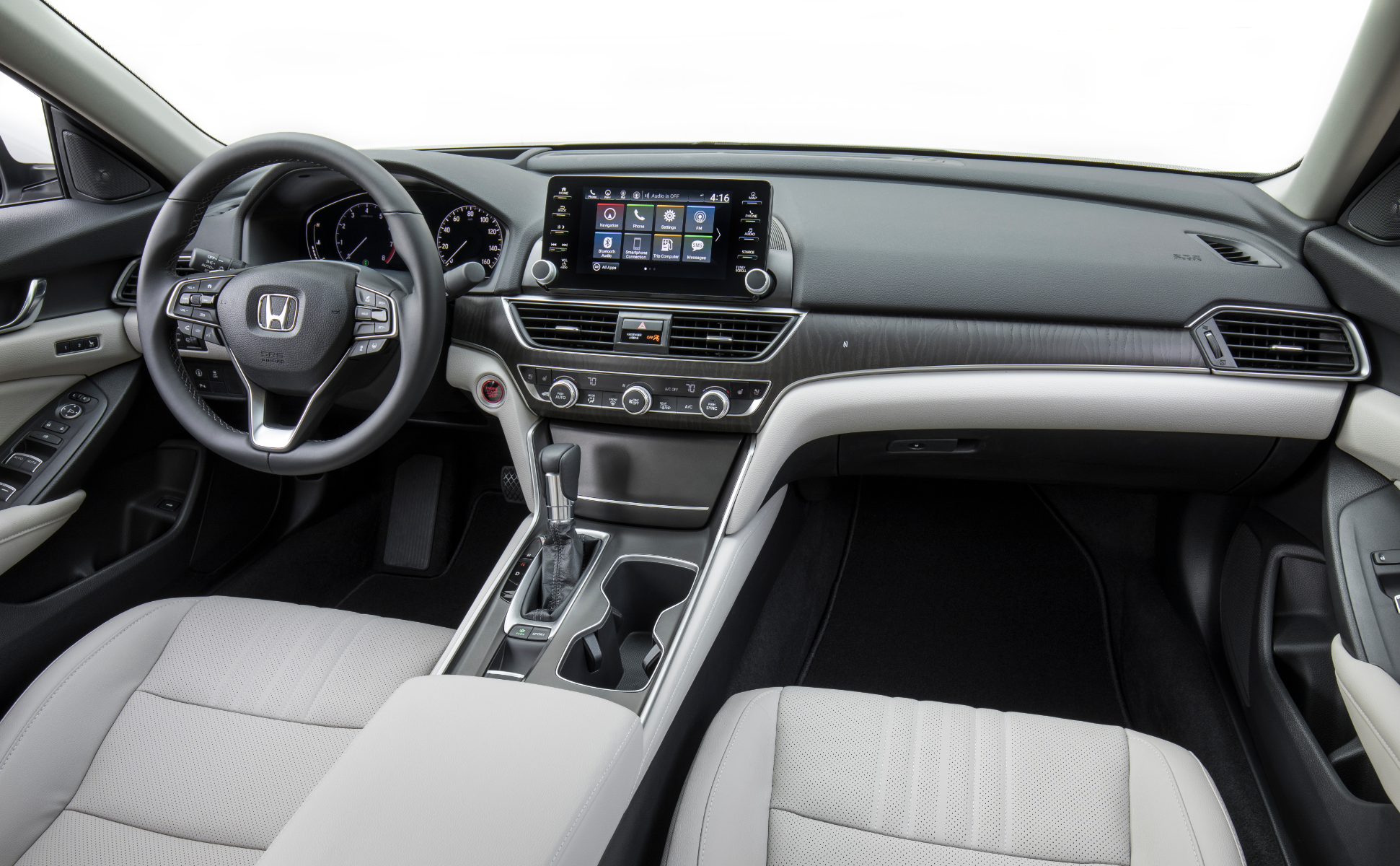 The interior boasts a good amount of storage space along with numerous padded surfaces, including the door tops (where you rest your elbow). Climate controls consist of rotary temperature and fan-speed adjustments, but a less-convenient repetitive-step pushbutton for mode; all are easy to reach. 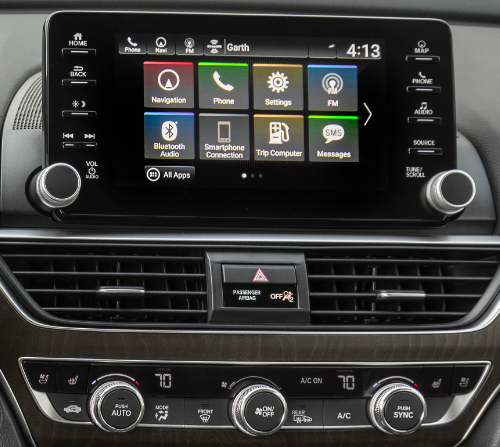 Although the infotainment controls include volume and tuning knobs along with several handy pushbuttons — a real convenience benefit — those at the far right can be a bit of a stretch for the driver to reach.

Infotainment controls are fairly clear, but some are not quite as handy. All are on a separate dash-top touchscreen that — thankfully — incorporates a number of manual controls including volume and tuning knobs along with several buttons. But some oft-used controls are on the right side of the screen, which can be a bit of a reach.

Although trunk volume is up a bit to a spacious 16.7 cubic feet with a very large, wide cavern at the rear, sickle-shaped hinges dip into the cargo area when the trunklid is closed, and there’s little under-floor storage space. And though the rear seat backs fold, they reveal a rather restricted-size opening, and there’s a 3-inch “step” that has to be cleared to slide long items forward. 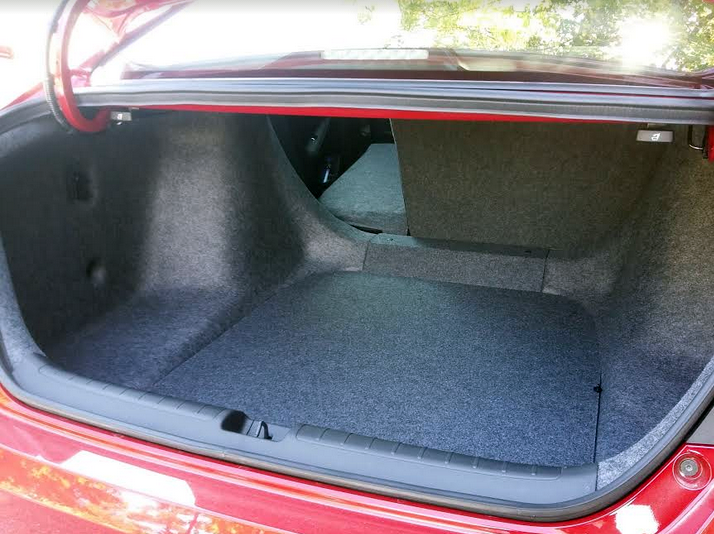 The large trunk offers a huge “box” of space at the rear, but sickle-shaped trunklid hinges impede on the space when the lid is closed. Also, folding the rear seat backs leaves a somewhat restricted opening, and a 3-inch step has to be cleared in order to slide long items all the way forward.

While the new 1.5- and 2.0-liter turbocharged engines offer a good amount of power (the 2.0 feeling particularly spritely), both suffer a bit when attached to their respective automatic transmissions. Neither provides a strong full-throttle jump off the line, though power builds quickly for impressive acceleration, with the 2.0 able to chirp the tires once the engine is on the boil. While the 1.5 turbo is about equal to the 2.4-liter four it replaces in this regard, the 2.0 can’t match the “strong everywhere” feel of the outgoing V6. Both automatics kick down fairly quickly when the throttle is stabbed for more passing power, but some competitors are quicker in this respect. (Although few people will probably order the manual transmission, it’s a slick-shifting unit with an easily modulated clutch.) Better in these regards is the Hybrid. It not only provides a stronger full-throttle surge off the line, but throttle tip-in while underway produces a nearly instant and linear gain in speed. Also, the Hybrids now offer the same cargo space as the gas models, and they come with new paddles on the steering wheel that allow you to adjust the level of regenerative braking provided when you lift off the throttle.

Our preview drive was held in New Hampshire on a route that included plenty of turns but few potholes. As such, an evaluation of ride quality on poor surfaces will have to await testing on our local Chicago-area streets (where there are plenty), but from what we experienced, ride and handling seem as good as that of any car in the class. Particularly noteworthy was the steering. The new variable-ratio system provided quick turn-in during cornering for a sporty driving feel without suffering “twitchiness” in straight-line cruising.

Although midsize sedans aren’t the industry-leading segment they used to be, they’re still the choice of a tremendous number of buyers. And every one of those buyers would be well served by giving the redesigned 2018 Honda Accord a very long look.

Although it’s roughly the same length as before, the new Accord boasts a sportier profile thanks to a shorter front overhang, longer hood, set-back cabin, and “fastback” roofline.