Jeep’s iconic Wrangler has been selling like the proverbial hotcakes of late, its 2018 redesign making it all the more popular. So some might question what the company expects to gain by adding a turbodiesel engine to the Wrangler’s option list.

… lots and lots of torque. 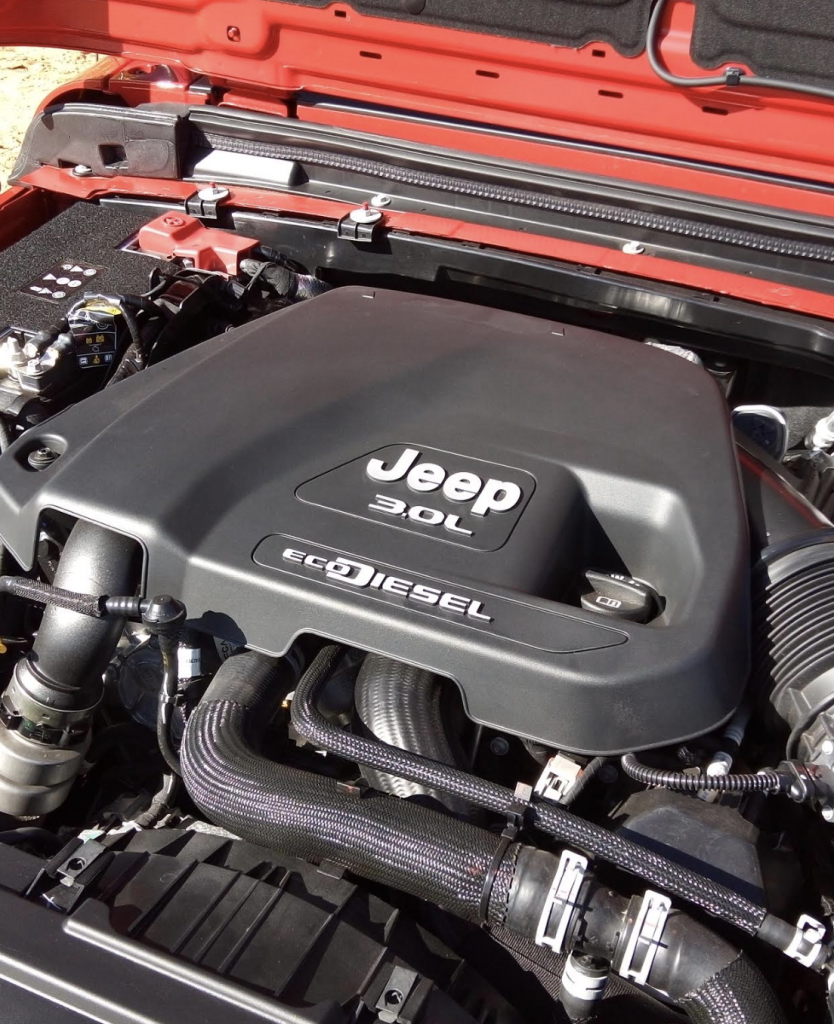 At 442 lb-ft, the new 3.0-liter V6 EcoDiesel makes at least 50 percent more torque than either of the Wrangler’s gas engines.

It’s not that the Wrangler’s gas engines are any wimps in this regard. The 3.6-liter V6 puts out 285 horsepower and 260 lb-ft of torque, strong numbers for a vehicle that — size-wise — is at the large end of the compact-SUV class. A turbocharged 2.0-liter four joined the Wrangler’s powertrain roster with the 2018 redesign, bringing 270 horsepower and 295 lb-ft of torque – along with better fuel economy. We tested a Wrangler with the 2.0 turbo and found it to be surprisingly spritely and quite fuel-efficient.

But neither of those engines holds a candle to the twist generated by the new turbodiesel. Based on the third-generation EcoDiesel introduced on the Ram 1500 last year, the Wrangler’s produces 260 horsepower and a whopping 442 lb-ft of torque.

It might surprise some that sand is incredibly difficult to power through; less surprising is that hills are power-sappers as well. Since both are often encountered in off-road driving, the traditional torque of a turbodiesel has long been on the wish list of more adventurous Wrangler buyers. And for those whose adventures take them to great heights, turbocharged engines — whether gas or diesel — lose less of their power at high altitudes due to the thinner air (which saps about 3 percent for every 1000 feet of elevation in other engines), because the turbocharger can just force in more air to compensate.

Our off-road excursions took us over sand and steep hills … and no small amount of jagged rock.

Most EcoDiesels will probably be fitted to off-road-focused Rubicons (right), which come with higher ground clearance and larger, knobbier 33-inch tires.

But while the turbodiesel does indeed produce a lot of low-end torque that aided in the rather severe off-road driving we did – which included stretches of sand and some really steep hills, both of which our Wrangler conquered with ease – not all was as rosy on the street. As with most smaller turbocharged engines, the power doesn’t always come in as soon as you hit the gas. That’s most evident if you floor the throttle from a stop, as the Wrangler accelerates rather timidly for a couple of beats before a smooth rush of power comes in. (This isn’t as much of a demerit in off-road driving, as quick bursts of power are difficult to modulate, making tires spin when you don’t want them to.) But there’s little hesitation once the vehicle is underway, and response is impressive when dipping into the throttle at around-town speeds, aided by quick kickdowns from the standard 8-speed automatic transmission (no manual being offered). In normal everyday driving, most wouldn’t notice much difference with the EcoDiesel.

Another traditional advantage of turbodiesels is fuel economy. EPA figures had not yet been released at the time of this writing, but since diesel-fuel prices of late have been running about 10-15 percent more than that of gasoline, a diesel needs to be that much more efficient just to break even on fuel cost. Without that, the fuel-economy benefit of a turbodiesel comes down to a longer driving range between fill-ups, not an inconsequential advantage. As of now, Jeep is estimating the EcoDiesel will get about 30-percent better fuel economy than the standard V6, resulting in a range of up to about 500 miles. Despite the added grunt, maximum towing capacity remains the same as other 4-door models at 3500 pounds. 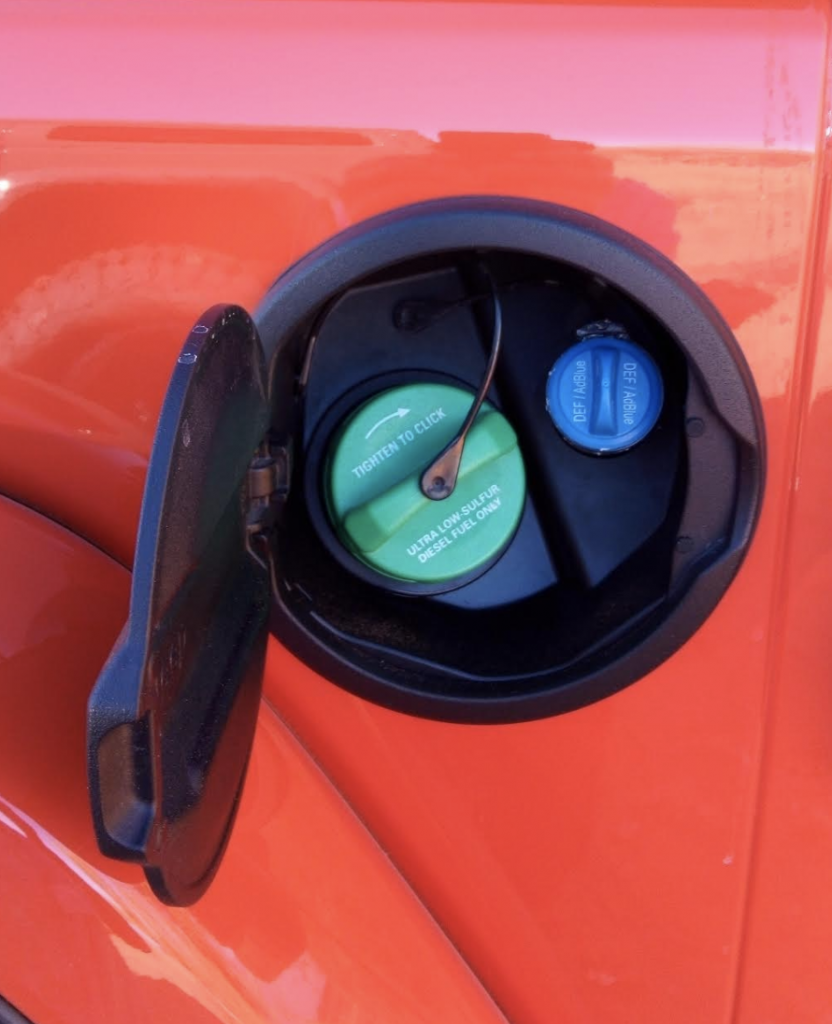 As with most modern diesels, one must add DEF (Diesel Emission Fluid — blue cap), but due to a large 5.1-gallon tank, Jeep says it should only have to be filled about every 10,000 miles.

An equally traditional disadvantage of diesels is engine noise. “Diesel clatter” used to be a defining and somewhat annoying characteristic, something that most modern diesels have largely overcome. But not entirely. In the case of the EcoDiesel, you can hear a clatter at idle if you’re outside the vehicle or inside with the windows open, and there’s some under acceleration, but otherwise, it produces more of a whirring noise that’s hardly bothersome. Much thanks here goes to what Jeep says is added sound insulation, a small contributor to the turbodiesel’s roughly 400-lb weight gain over gas-engined Wranglers.

Another traditional diesel disadvantage is cost. Choosing the Italian-built EcoDiesel adds $3250 over the 3.6-liter V6 and $4500 over the 2.0-liter turbo. Plus – as with nearly all modern diesels – there’s the cost of DEF (Diesel Emissions Fluid) that has to be added about every 10,000 miles, though that’s not much if you do it yourself, and it’s readily available in stores.

Although the EcoDiesel is optional on nearly all Wrangler trim levels, it’s only offered on 4-door models – partly because 2-doors only make up about 10 percent of sales. Orders are being taken now, with deliveries due to start in December.

A Rubicon with the EcoDiesel engine is a capable combination that can tackle some serious off-road trails.