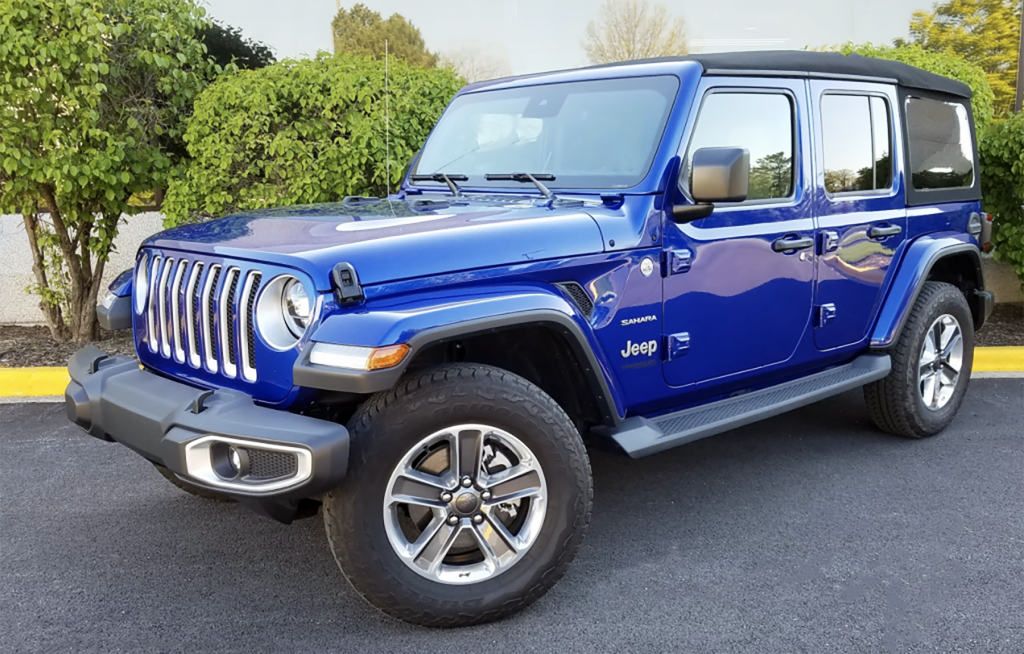 The not so good: Hard-to-access cargo area (soft top), side visibility, ride (for the class), non-linear power delivery

It used to be that driving one of the world’s most iconic vehicles required a certain level of … sacrifice.

But not any more. 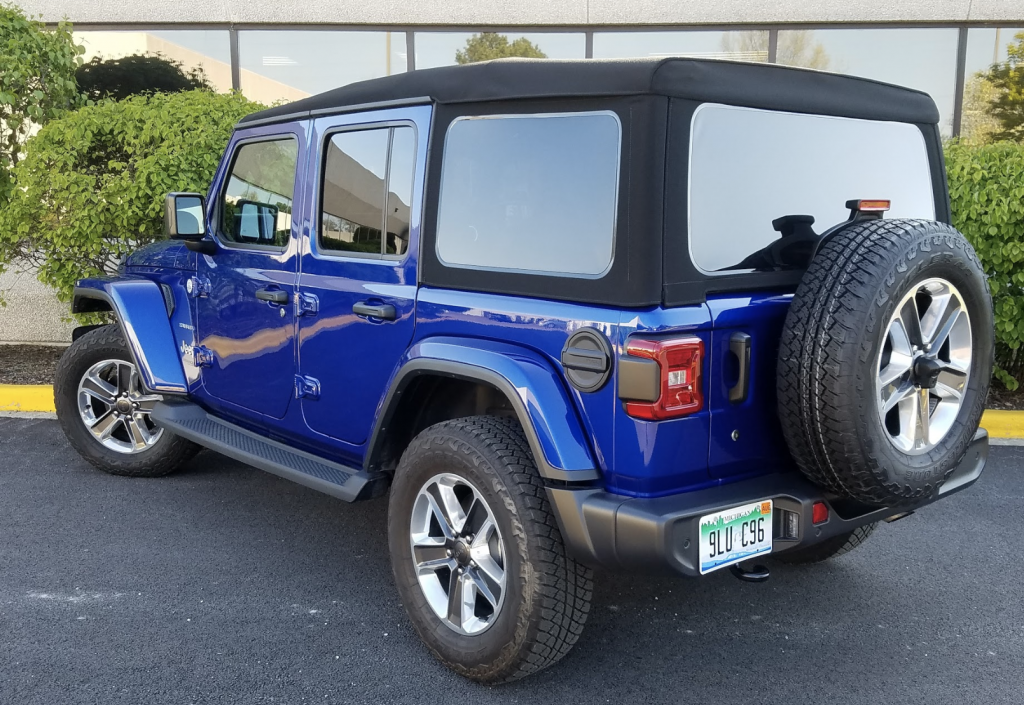 Test Wrangler came with a soft top — which is standard — though this one was the $595 Sunrider version.

Since the early CJs evolved into the Wrangler, the military-bred Jeeps have become increasingly more civilized. But the early bar for that was low, and the steps largely incremental. With the last generation of Wranglers that hit the streets for 2007 – referred to as JKs — they were at least tolerable. But with this latest JL generation that arrived for 2018 … they’re there.

No, they still aren’t as refined as a normal passenger car, or even most other SUVs – which as a group took a big step in that direction with the advent of “crossovers.” But the latest Wranglers have crossed the “tolerable” line to finally become a vehicle one could stand using for everyday transportation.

And fortunately, it was done without sacrificing what made the vehicle iconic to begin with. Every Wrangler comes with 4WD, but now – as a step in the “civilized” direction – one can choose a full-time system that doesn’t have to be disengaged on dry roads. And our tester was so equipped. All also continue to offer traditional “open top” capability, a transformation now made much easier with removable roof panels for the hard top and an easy-to-fold-back roof for the soft top – which can also be removed altogether. On all models, the doors can still be taken off (though that now requires tools, which are included) and the windshield can be folded down (ditto). But it’s the easy transition to open-air freedom that’s the real revelation. 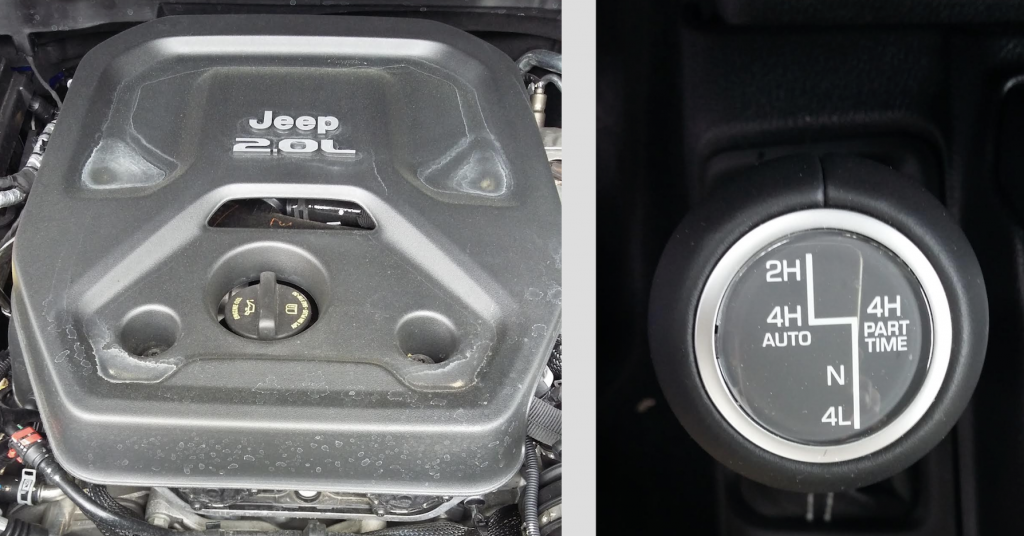 Our tester was fitted with two options that have been added to the Wrangler for the JL generation that debuted for 2018: a 2.0-liter turbocharged 4-cylinder engine, and a full-time (“4H Auto”) 4WD system.

While Wranglers used to be offered with a 4-cylinder engine, even the lighter early models so equipped were slow, and the little engine had to work so hard that fuel economy really wasn’t much improved over the 6-cylinder version. As such, one hasn’t been offered since the introduction of the larger JK.

But now one has returned, and though it would seem to be an even worse idea with the even larger JL, our tester – which was so equipped – showed that this is the little engine that could.

To be fair, this 4-cylinder has some help. Though displacing only 2.0 liters (the old one was 2.5), it’s turbocharged to produce a resounding 270 horsepower and 295 lb-ft of torque, both comparing favorably to the 285/260 numbers of the standard 3.6-liter V6. It also features eTorque, a mild-hybrid system that aids both fuel economy and throttle response, kicking in a small electric motor to assist with acceleration. But since the turbo four costs $1000 extra, why would you want it?

The most obvious reason would be for its increased fuel economy. Our tester carried EPA ratings of 22 city/24 highway/22 combined (the lighter 2-door version adds 1-2 mpg), and our overall average of 22.4 in a mix of city/highway driving backed that up. By contrast, a recently tested Wrangler with the 3.6 was rated at 18/23/20 and returned 19.6 mpg in similar driving. Part of the improvement is due to an engine stop/start system, which is fairly unobtrusive in operation and can be turned off.

Our timer clocked the Wrangler with 2.0-liter turbo at an impressive average of less than 7.0 seconds in the 0-60 dash.

But this test-vehicle’s powertrain – which included an 8-speed automatic transmission, a $2000 option over the base 6-speed manual — also seemed very responsive, and our Wrangler averaged an almost stunning 6.87 seconds in the 0-60 dash. The downside is that power delivery is not always linear, yet there is adequate benefit to justify the little turbo’s $1000 surcharge over the 3.6 V6.

The ride is relatively absorbent over city potholes, and though it can’t quite match the composure of most other compact crossovers, it’s at least livable, and maneuverability is surprisingly good for what is really a rather large vehicle. And the only real annoyance on the highway is a tendency to wander a bit, especially in crosswinds, along with a bit more wind and road noise than the norm — though again, not enough to be troublesome.

Despite a starting price of about $40,000 with destination, our test vehicle managed to hit $52,210 with a slew of options. Notable among them was the Selec-Trac full-time 4WD system at $595 (a bargain in the snow states), adaptive cruise control with forward collision warning and mitigation for $795, the Active Safety Group with rear obstacle detection and blind spot/rear cross traffic alert for $895, and the Cold Weather Package bringing heated front seats and steering wheel with remote start for $995.

We covered the current-generation Wrangler not only in a First Spin report but also in a Test Drive review of a locally driven 2018 4-door hardtop with the 3.6-liter V6, so we invite you to see those reviews for more details. Here we’ll concentrate on the major differences between our previous test vehicle and the turbo 4-cylinder/soft-top-equipped Wrangler described here. 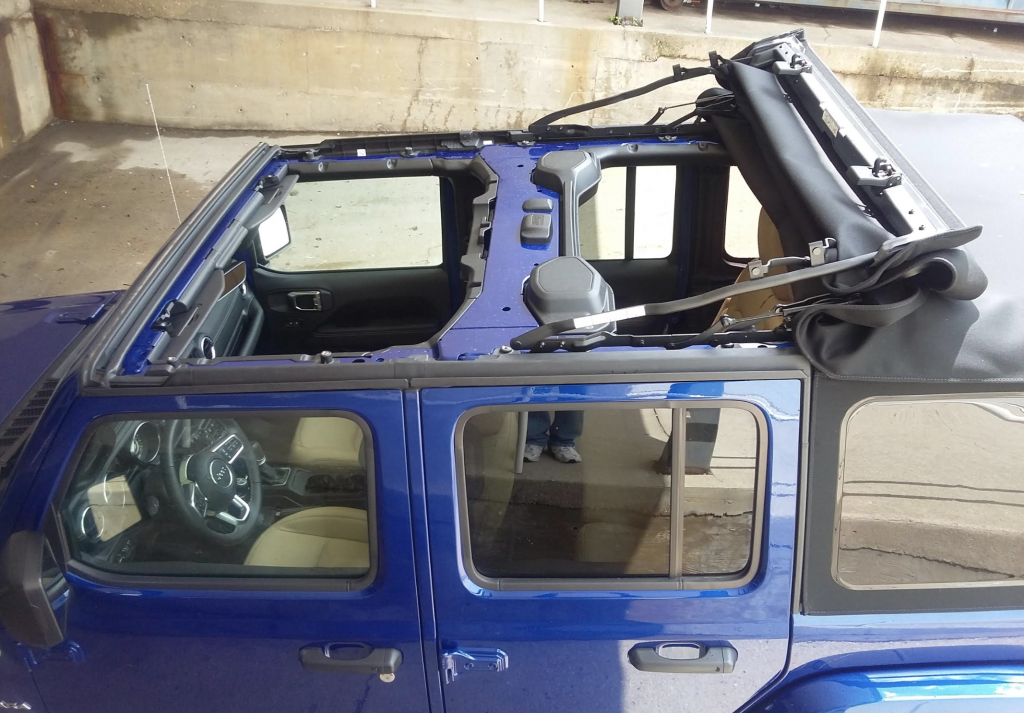 Nothing “opens up” like a Wrangler, and now it’s easy — though you have to fold back the top from outside the vehicle.

Our tester was fitted with the optional Sunrider Soft Top ($595), which proved relatively easy to “open up,” though it requires doing so from outside the vehicle. The roof folds back by releasing two windshield-header latches, then pivots back to reveal a huge opening that begins well in front of the driver’s head, leaving more of an open-air experience than in most any other convertible. While the rest can also be removed –- along with the doors – it requires use of the included tools and some added time. For most, just lowering the top and the windows will likely be enough. And while part of this may be due to the Sunrider option, top up, the Wrangler is reasonably quiet on the highway, with mild tire roar usually being more noticed than wind noise.

10 Cool Things About the Jeep Wrangler

Not as easy to open up is the cargo area. Oh, the door swings to the side with no trouble, but the rear “window” (actually flexible vinyl) needs to be detached — a process, even after you get the hang of it — and rolled up. But the opening then revealed is huge.

But there’s also a down side. In back, the lower (steel) cargo door swings to the side, but the vinyl rear window doesn’t go with it. And raising the rear window is somewhat of an ordeal – one that needs to be endured if you want to load anything large. In my case, at least, it also required consulting the owner’s manual in order to figure it out, as some of the actions aren’t intuitive – even to someone who has owned two Wranglers and a CJ. But after rounding the learning curve, of course, it’s only the time involved that’s bothersome. There’s also some cargo space under the floor, handy for stashing the small stuff you always want with you.

Visibility is generally OK except to the sides, with a 180-degree rearview camera helping out when backing. Interior storage is good though could be better, but there’s a complete array of accessory plugs, including Aux, USB, USB-C, and 12-volt on the dash. Our tester also had a 120-volt AC (household) outlet in the back-seat area. 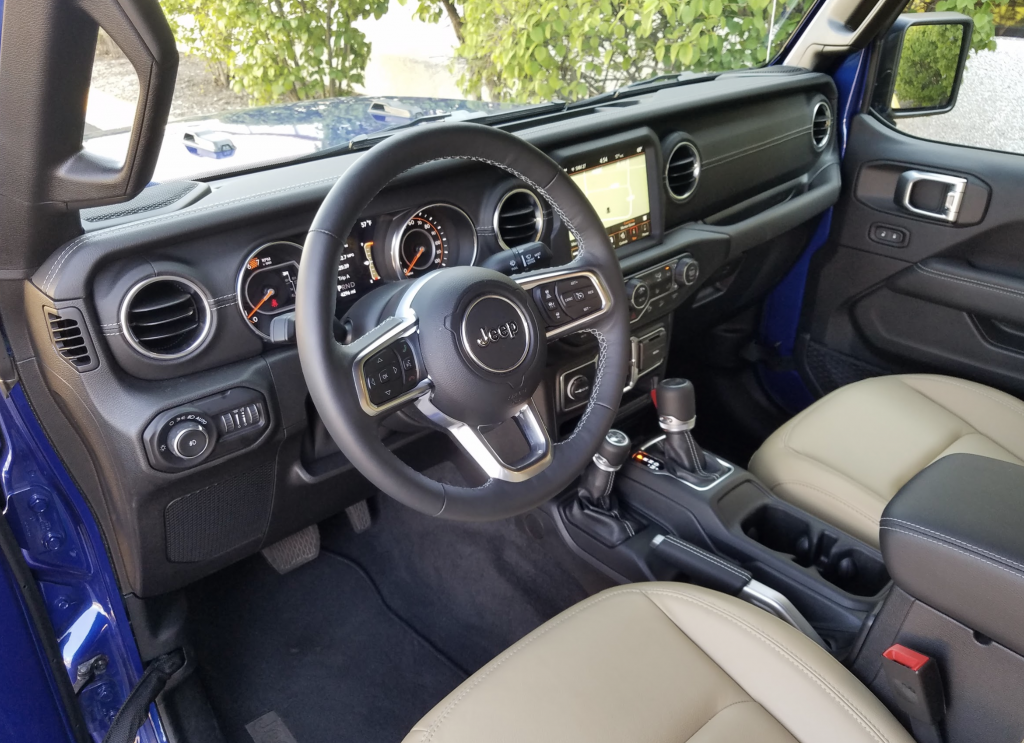 Padded surfaces and modern features can now be found inside the Wrangler, which helps make it decidedly more civilized … and expensive.

Headroom is good all around, and though there isn’t much rearward seat travel in front, there’s a huge amount of legroom in the rear, with a low floor hump allowing good foot space for a center-seater. Also back there are climate vents, USB and USB-C plugs, and the aforementioned 120-volt AC outlet. The tall ride height means a tall step-up into the interior, something aided by grab handles and – depending on your height — our tester’s running boards.

While it’s a little staggering to think of a Wrangler starting at $40,000 and easily topping $50,000 with options, there simply is no other vehicle that can match its open-air fun and off-road capability. And while that’s long been the case with the Wrangler, you can now take advantage of those features without enduring the suffering that historically came along for the ride.

Depending on your height, our tester’s running boards could be a help or hindrance to entry and exit. But either way, they greatly assist when trying to get up high enough to fold back the top. And the ability to do that — opening a huge overhead portal — is one thing that makes the Wrangler unique.