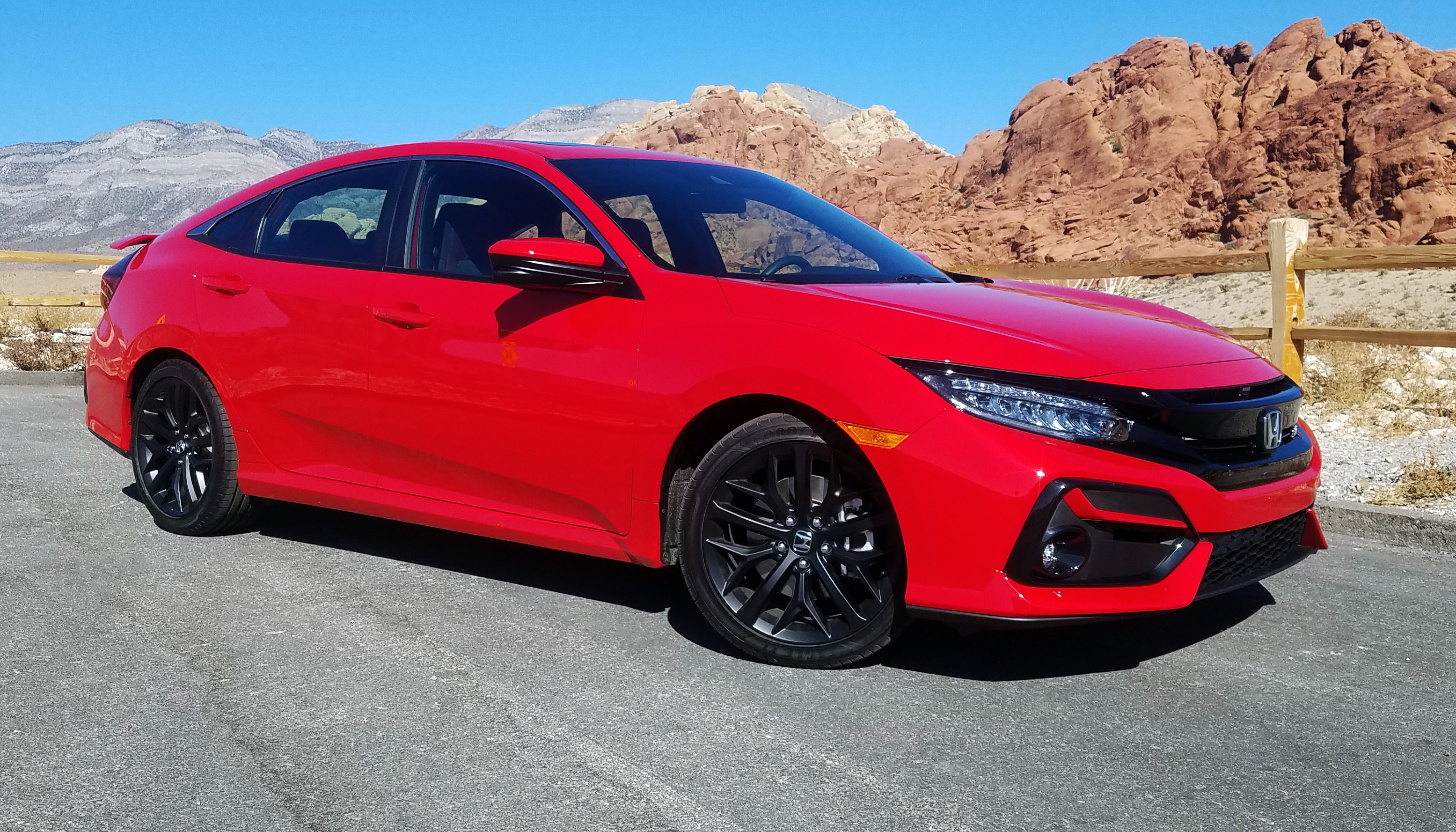 Ever since the tenth-generation Civic’s debut as a 2016 model, Honda has stayed busy rolling out new versions and fine tuning the Civic lineup’s styling and ergonomic details. Coupe and hatchback body styles followed shortly after the ’16 Civic sedan’s launch, sporty Si models (and the racetrack-ready Type R hatchback) followed for 2017, and a freshening for 2019 included an improved infotainment system and other welcome updates. 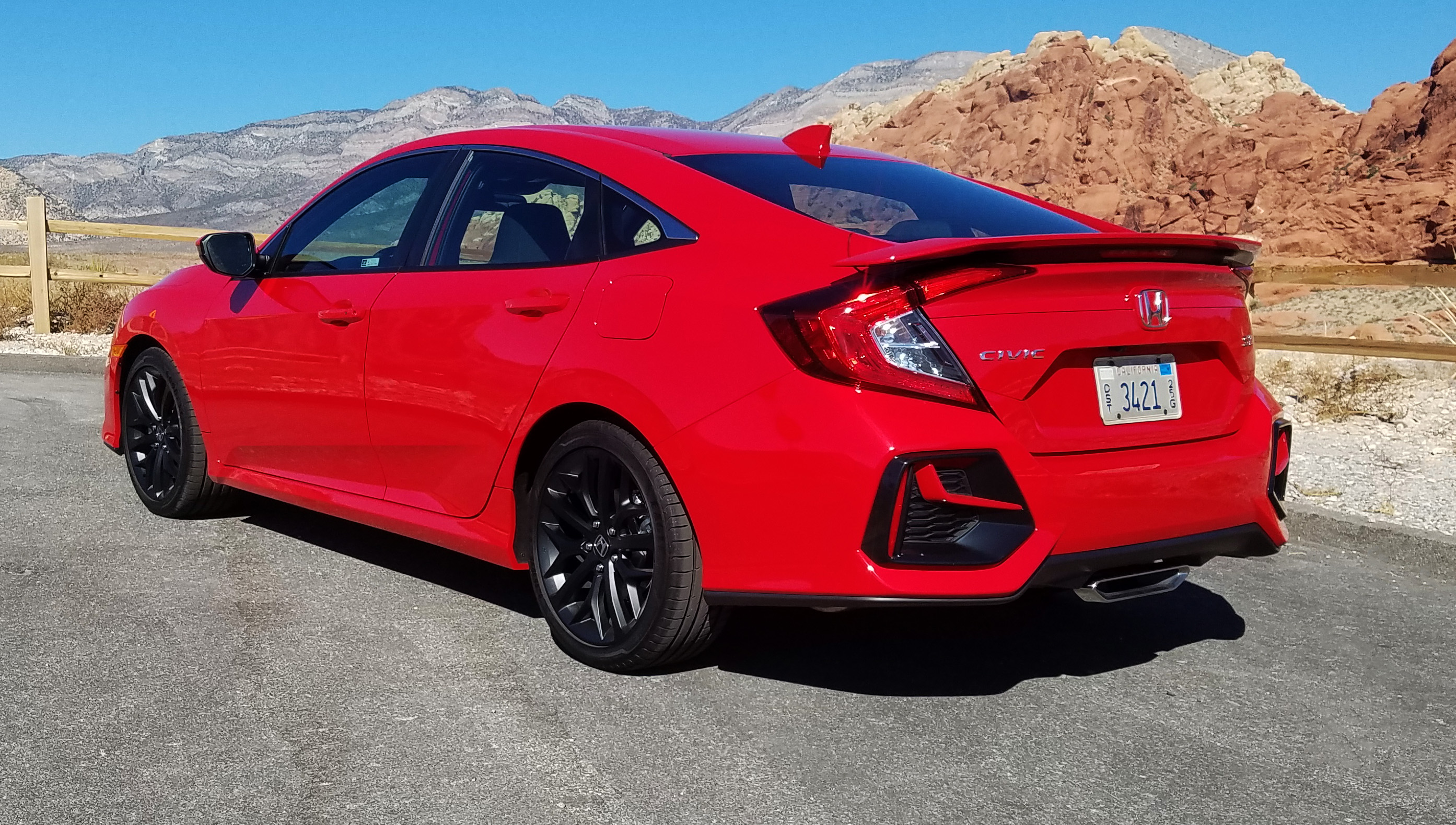 As the second-sportiest Civic trim level, the Si has a few distinctive exterior styling touches, including a decklid-mounted spoiler and a unique slim, center-mounted exhaust outlet.

As before, the Si is available only in 4-door-sedan or 2-door-coupe form. Honda doesn’t offer the Civic hatchback as an Si, though a Sport or Sport Touring hatchback, with its 180-horsepower engine and available 6-speed manual transmission, gets fairly close.

You’ll have to look closely to notice the styling differences between a 2019 and a 2020 Civic Si. The distinctive center-exit exhaust and rear-decklid spoiler carry over unchanged, but there are new multi-element LED headlights and LED fog lights, and the front and rear bumpers have been restyled—slim body-color “blade” elements have been added to the large faux “air-vent” panels, which thankfully tones them down a bit. The wheels have been changed as well; the Si’s rollers are still 18-inchers, but they’re now matte-black units with a slightly more aggressive look. Inside, there are additional red accents on the dashboard, and the front seats also get red trim inserts.

The Si trim level brings a number of sporty touches to the basic Civic cabin, including red accents, metal pedals, and substantial-feeling short-throw shifter. The Civic sedan’s rear seat is one of the most spacious in the compact-car class.

The Si’s engine itself also continues unchanged; it’s a 1.5-liter turbocharged 4-cylinder that puts out 205 horsepower and 192 pound-feet of torque, and is paired exclusively with a 6-speed manual transmission. This engine is no stump puller, but it revs smoothly and quickly, and provides invigorating acceleration as the rpms rise. Adding to the fun is a crisp, nicely weighted shifter that’s a joy to row through the gears. We don’t doubt that the new final-drive ratio (it’s now 4.35:1 instead of 4.105:1) provides a bit more zip, but you’d probably need to drive a 2019 model and a 2020 back-to-back to notice the difference. Summoning adequate “right-now” passing power at highway speeds still requires a downshift or two.

Ride quality is quite good for a sporty car, especially in the “standard” suspension mode. The Si’s two-mode adaptive damper system is a nice bonus; among its primary competitors, only the Volkswagen Jetta GLI and Golf GTI offer a similar feature. Pressing the Sport button on the Si’s center console constricts the valving on the car’s dampers, making for a stiffer ride but reducing body roll and enabling sharper cornering capabilities. The taut suspension and crisp, accurate steering feel help make the Si a lot of fun to hustle along a curvy road. 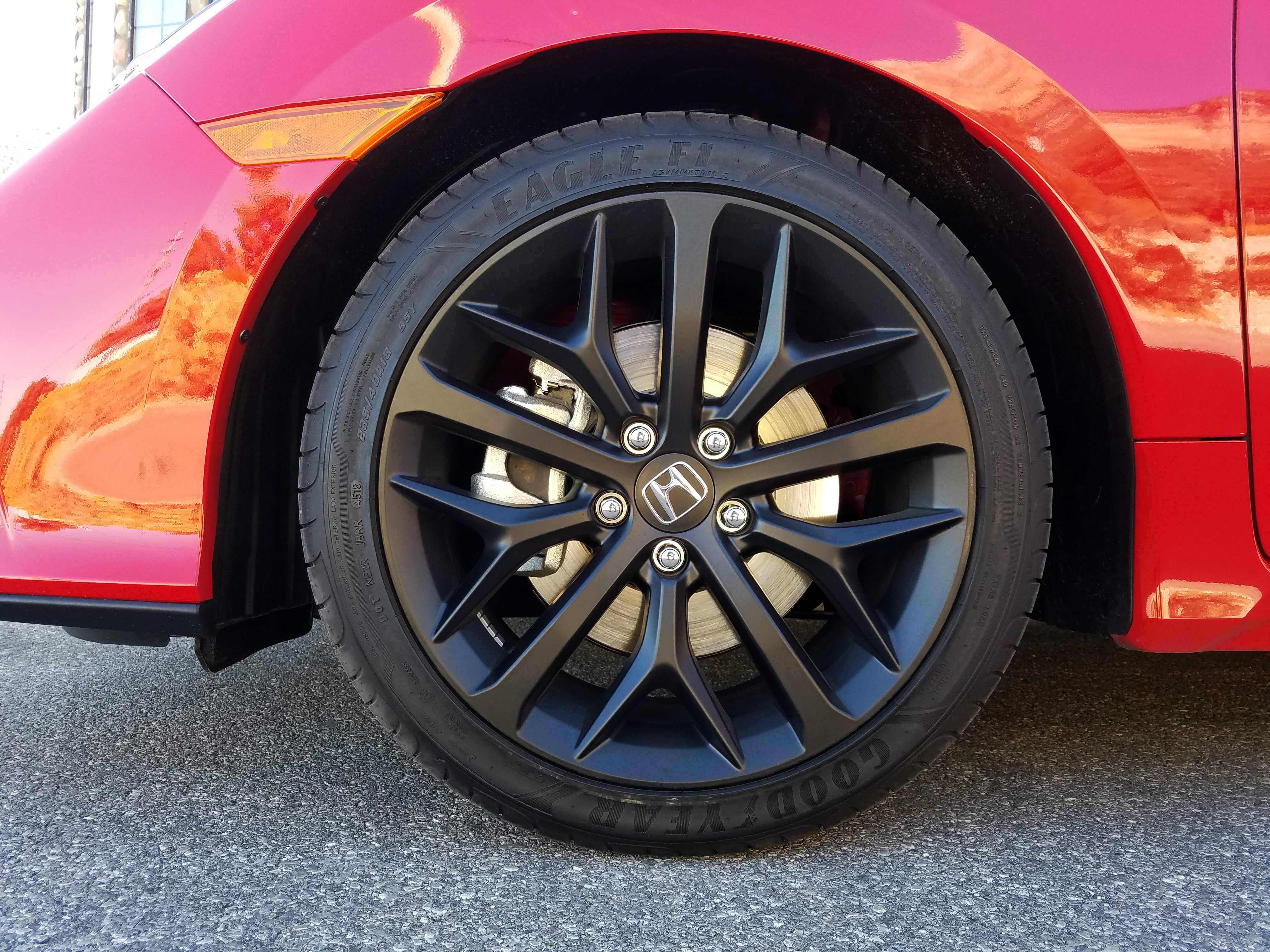 The Civic Si’s 18-inch wheels get a new design and an all-matte-black finish for 2020. The summer performance tires seen here are a $200 upgrade.

And speaking of cornering, the Si’s sport front bucket seats have side bolsters that are snug enough to provide support in spirited driving, but not so tight as to be uncomfortable on longer drives. Other than its sporty trim touches, the rest of the Si’s interior is almost identical to other Civics, which is mostly a good thing. Last year’s Civic refresh thankfully brought back a physical volume knob and buttons to replace the previous infotainment system’s tedious touch-sensitive controls. However, we still have one interior-comfort nitpick—the Civic’s sliding center console/cupholder cover is not the most comfortable armrest, as its seam is positioned exactly where we rest our right elbow.

The Civic isn’t at the head of the compact-car class in terms of all-around quietness these days, and the Si is no exception. Depending on the road surface, there can be quite a bit of tire roar and road noise that makes its way into the cabin. The engine is pretty vocal as well, but that’s part of the Si’s charm for its target buyer. The exhaust note rises from a raspy rumble at idle to a snarky growl at redline that even sounds a bit exotic. It also has a little help… a new Active Sound Control system pipes in an “enhanced” engine sound through the car’s audio system during aggressive driving.

Both the Si coupe and sedan are the same price: $25,000 even, plus a $930 destination charge (that’s $2600 less than the Civic Touring sedan, about three grand less than a Sport Touring hatchback, and more than $11K cheaper than the king-of-the-hill Type R hatchback ). If you’d like your Si on a set of summer performance tires, Honda will add those for another $200. Those tires are about it for factory-installed options—the Si is essentially a mono-spec vehicle. And at these prices, upscale features such as leather upholstery or a navigation system aren’t part of the deal. We’re fine with this strategy; a big part of the Si’s appeal is that it is an accessible, affordable vehicle for young enthusiast drivers. Just as the Civic lineup itself brings new customers to the brand, Honda considers the Si a “gateway” vehicle to Honda high performance and sporty cars in general.

The Civic Si has been around in one form or another (with only minor interruptions) in the American market since 1986, which makes it something of an elder statesman in the sporty compact category. The Volkswagen Jetta GLI and Golf GTI are natural rivals, but they’re a tad more expensive. The Si’s closest and most compelling competitors are Korean—Hyundai offers the Elantra Sport sedan and Elantra GT N-Line hatchback, and the Kia Forte lineup just gained GT models for 2020. All of these have a 201-hp turbocharged 1.6-liter four and starting prices that undercut the Civic Si.

Still, those upstarts don’t have the same heritage as the Si, and don’t quite reach the same level of powertrain and handling finesse. If you’re in the market for a 2020 Civic Si, you don’t have to wait… they’re on sale at Honda dealers right now. 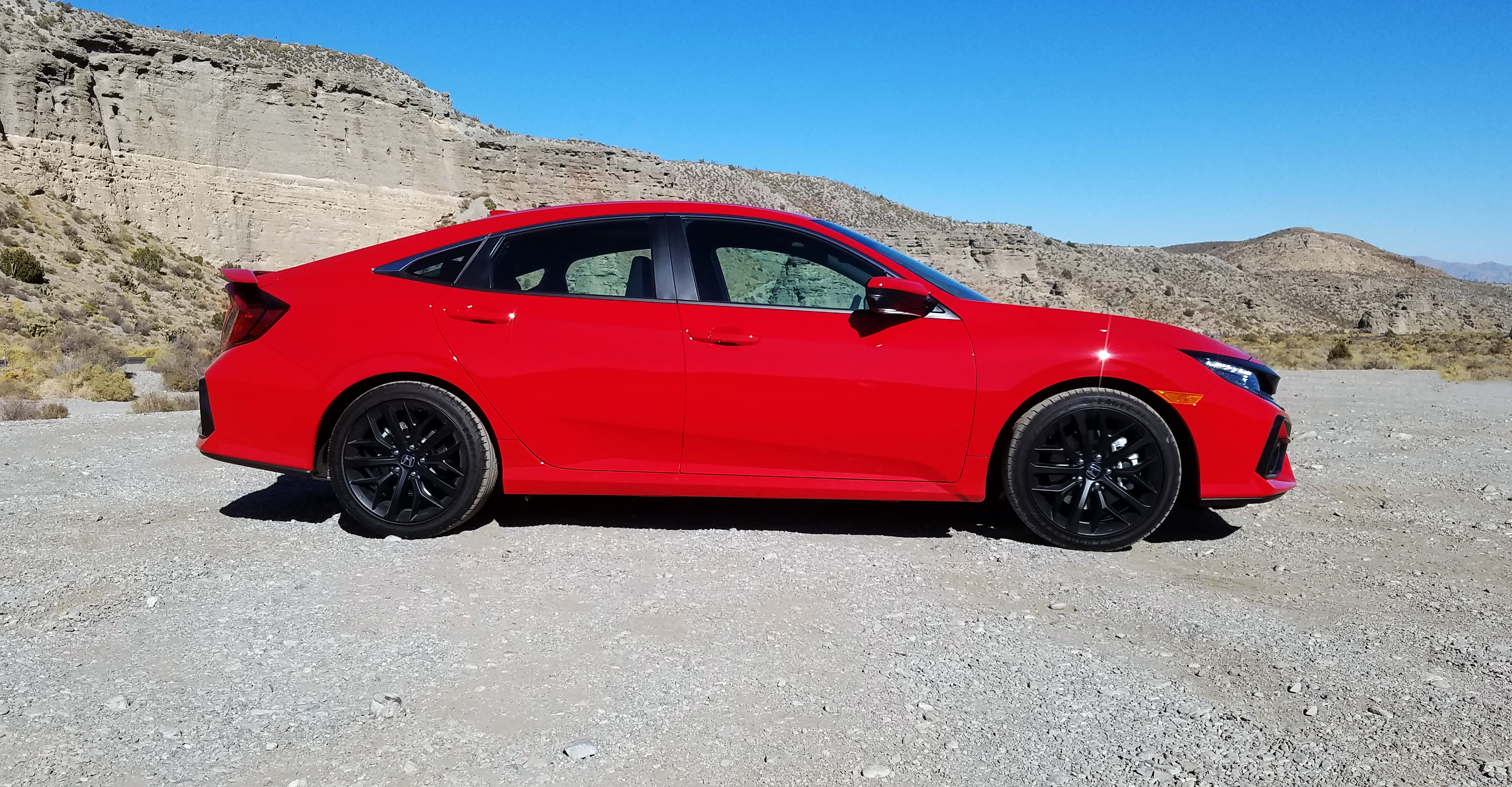 With a base price of $25,000 plus destination in either 2-door coupe or 4-door sedan form, the 2020 Honda Civic Si is one of the most affordable performance cars on the market… and it’s quite practical too.