In a class that divides roughly 2.4 million annual sales between just six entries with average transaction prices reaching $48,000, Nissan’s Titan has long run a distant last. While it’s unlikely this recent update will change that, it may well result in a bigger slice of this very lucrative pie.

And Nissan is hoping to do it despite a trimmed model lineup. Gone are regular-cab models (nowadays primarily purchased as commercial vehicles) along with King Cab (extended cab) and 5.0-liter V8 turbodiesel versions of the “heavy half-ton” Titan XD. That leaves the regular Titan in King Cab (with 6.5-foot bed) and Crew Cab (with 5.5-foot bed) body styles, and the Titan XD in a lone Crew Cab body style with 6.5-foot bed. All are powered by a 5.6-liter V8 with a slight power boost to 400 horsepower (from 390) and 413 lb-ft of torque coupled to a new 9-speed automatic transmission that replaces a 7-speed, with a choice of either rear-wheel drive or a part-time 4-wheel-drive system with low-range gearing.

Regular Titans have a maximum payload and towing capacity of 1680 lbs and 9370 lbs, respectively, while the XD maxes out at 2450 lbs and 11,000 lbs, respectively. EPA fuel-economy estimates had not been released at the time of this writing.

Trim levels for both regular and XD models ascend through base S, mid-level SV and SL, luxury Platinum Reserve, and off-road-oriented PRO-4X. S and SV come with a front bench seat for 6-passenger capacity. Optional on the SV and standard on higher-line models are front bucket seats that cut seating capacity to five.

The titan “T” form is echoed in many places, from the grille shape to the instrument panel, badges, rear trim panel (on Platinum Reserve), and the taillights.

Aside from some styling tweaks that result in a bolder appearance with more emphasis placed on the Titan model name, the biggest news for the 2020 refresh is the addition of a number of new features, many – particularly on the safety front – being standard.

Some nice features available on the 2020 Titan include a power tilt/telescopic steering column whose setting can be included in the driver-seat memory, a panoramic sunroof that retains the over-window grab handles (Nissan says that combining both is a class exclusive), and a left-side dash “roller” (at bottom of right photo) that adjusts headlight height to compensate for heavy loads in the bed.

New for 2020 is a dual-pane glass sunroof available on SL, Platinum Reserve, and PRO-4X, which Nissan says is the only one in the class that preserves the overhead grab handles. New for PRO-4X is an off-road gauge display that — among other things — provides an inclinometer.

Another is power. Although top optional engines on GM and Ford pickups produce more, the Titan’s 400 horses beats anything offered by Ram or Toyota, and is by far and away the most powerful standard engine in the class. Whether this is reflected in performance will have to await a local test, as much of the driving on the preview near Park City, Utah, was held at 7000 feet of elevation, where more than 20 percent of the engine’s horsepower had evaporated – almost literally – into thin air. However, the new 9-speed automatic showed itself well, with fairly quick kickdowns when the throttle was stabbed at speed.

Roads in the area were fairly smooth, so ride was likewise difficult to judge, a more telling test also coming from a local drive in Chicago – where the suspension would be subjected to our infamously pockmarked streets. The only real trial in this regard came during off-road drives of Titan PRO-4X models, which handled the rough terrain with aplomb.

In terms of accommodations, the Titan has some hits and some misses.

For a large pickup, headroom and legroom in front are limited for really tall folks. In back, headroom beneath the newly available dual-panel sunroof of a tested Platinum Reserve Crew Cab might be tight for those over about 6 feet tall, though legroom would be ample. In a PRO-4X King Cab, legroom in back would probably be tight for a 6-footer if the seat ahead was pushed far back.

Standard on SL and Platinum Reserve and optional on PRO-4X is a 360-degree camera system.

Visibility could also be better. The left-front roof pillar is very thick, blocking a lot of the view to that corner; the right side isn’t as bad. Side pillars are also thick, but those at the rear aren’t. Tall rear headrests block some of the view to the rear corners, and they don’t fold and are awkward to remove, the best option being to fold the rear seat back. A rearview camera is standard, as is – quite unusually – a 360-degree camera system, which displays on a large 8-inch screen and really helps when backing, maneuvering into a parking space, or pulling next to a curb. But tall front fenders and hood along with sheer size – all being normal these days – mean it’s still tricky to park a Titan.

Shown on a Platinum Reserve Crew Cab are rear seats that have folding back rests along with flip-up cushions that reveal under-floor storage bins, whose lids can be folded out to make a load platform.

Better is cabin storage space. At least on the top-line Platinum Reserve we drove, there are the usual large areas – glovebox, console box, console cupholders/bins, sand door map pockets – along with handy side console bins, with two 12-volt plugs (one in the console box, the other above the forward console bin) and two USB ports. In back, there are six cupholders, 12-volt and 120-volt outlets, and two USB plugs. The seat backs fold forward to create a flat cargo surface, and the cushions flip up to reveal an under-seat bin whose lid can be folded out to form a platform. 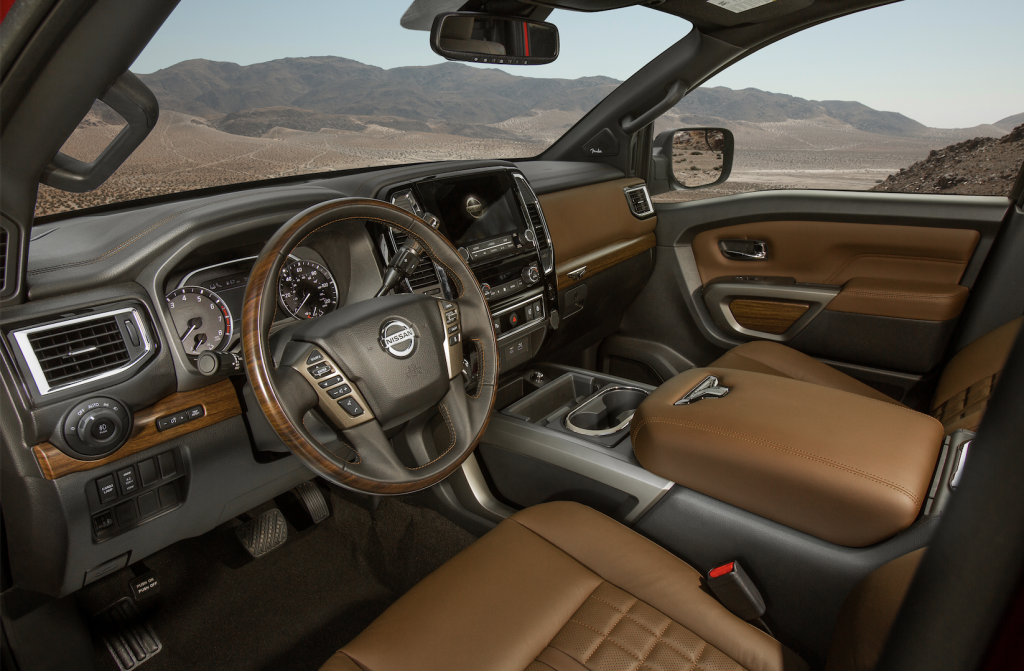 But pickups are all about the bed, and it doesn’t seem as though the Titan’s received much attention in the redesign. That’s not to say it’s deficient in any way, there’s just nothing new or creative.

A sliding back window is an unusual standard feature, with power operation being offered on all but the base S. Optional are cargo-bed sidewall boxes with a locking cover and a non-locking end bin along with a fold-down cargo-bed step.

The tailgate is damped, but you have to order an optional fold-down step to ease climbing into the bed (some rivals build a step into the bumper), which would benefit from a grab handle for helping yourself up. You can also order a 120-volt outlet for the side wall and large, lockable side-wall boxes that include covered corner bins (which don’t lock), along with the usual lights and tie-down rails. But while useful, the side-wall boxes aren’t as handy to access as Ram’s Ram Boxes, and the tailgate doesn’t have any “multi-function” capabilities like GMC’s MultiPro tailgate or Ram’s Multifunction Tailgate.

Traditionally popular has been the off-road-oriented PRO-4X, which comes with off-road tires and raised suspension along with skid plates and front tow hooks. Exclusive to this model is a grille badge with “Nissan” in red letters.

Although model choices have been cut considerably, Nissan says it’s concentrating its efforts on those that have proven most popular. Considering Titan’s low overall volume, that’s probably wise. And while prices have not yet been released — which means a value equation cannot yet be established — Titan offers an impressive selection of standard features along with some that are class exclusives. It also offers the segment’s longest bumper-to-bumper warranty of 5 years/100,000 miles. But that last item aside, while Titan may not be class-leading in any regard, it may well offer features many buyers want at Nissan’s traditionally competitive prices.

By far the most popular pickup body style today is the crew cab, and Nissan has focused its efforts there, along with providing lots of safety and convenience features personal-use buyers want.