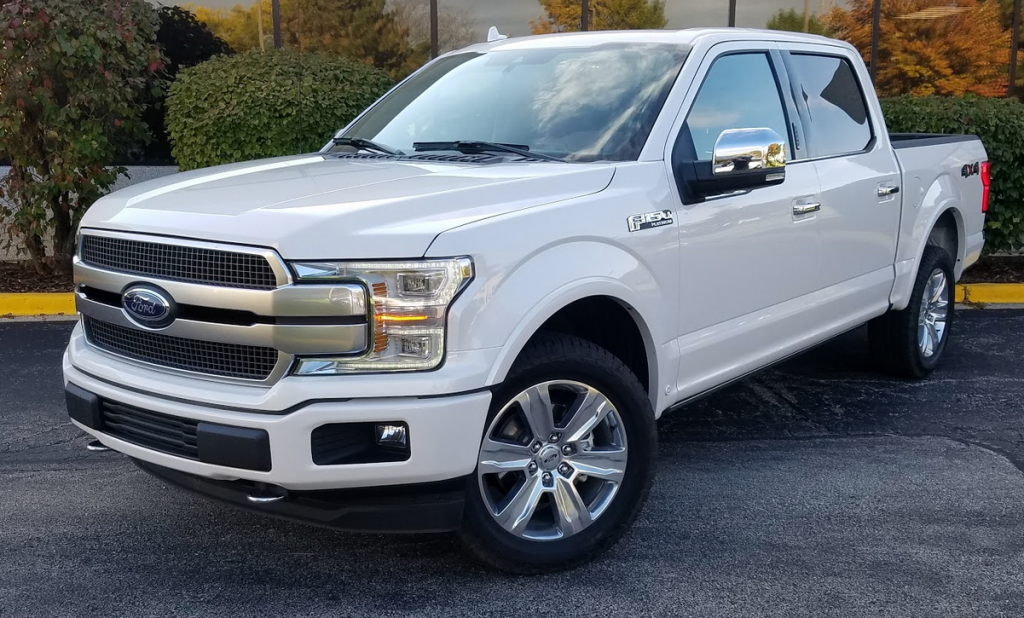 The not so good: Thirsty, ride can get a bit bouncy over bumpy roads

Ford seemingly gets a kick out of racking up those annual truck sales victories. After adding updated F-Series Super Duty models in 2017, it turns its attention back to the baseline F-150 for 2018, giving it a considerable list of improvements.

The high-volume ½-ton trucks get new grilles, headlamps, bumpers, taillights, and a restyled tailgate to refresh the 2015-vintage design, but there’s lots more below the surface. A new base V6 engine, expanded availability of Ford’s 10-speed automatic transmission, and added tech options are also in the mix. 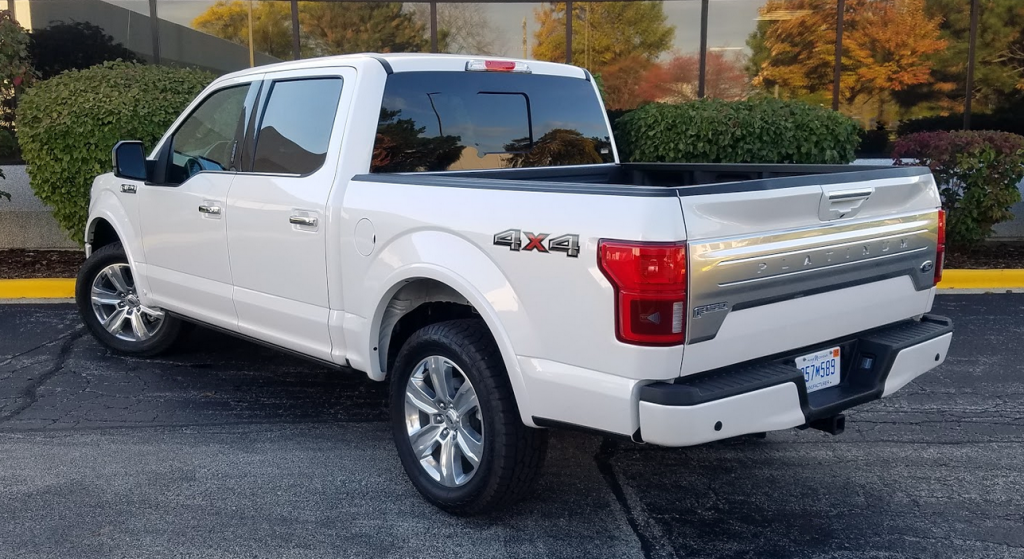 Consumer Guide® editors spent some time in a 4-wheel-drive F-150 SuperCrew (4-door cab) with Platinum trim, which is the first step below the top-line Limited. Even then, it is pretty plush, and it comes with a standard 5.0-liter V8 engine that produces good power.

The 5.0, which is the only V8 available for the F-150, gets stronger for ’18, with a 10-horsepower boost to 395 at 5750 rpm. Torque is a solid 400 lb-ft, though you have to run the tachometer up to 4500 rpm to fully benefit from it. Nonetheless, this powerplant gets the 5-passenger SuperCrew going in a hurry and maintains good pace on the highway—at least in the unburdened urban commuting this driver did. The 10-speed automatic, which is linked to all F-150 engines save the new base 3.3-liter V6, shifts smoothly and without confusion from its cornucopia of gear ranges. A V8 4×4 SuperCrew has a maximum conventional towing rating of 9000 to 10,900 pounds, depending on the configuration, and a payload ceiling of 2080 pounds.

In SuperCrew form, the F-150’s interior is truly cavernous–both the front- and rear-seat areas are spacious enough for plus-size adults. The Platinum interior trimmings provide an upscale ambiance.

With the 3.31:1 axle ratio that was in the test truck, the EPA fuel-economy estimates for the 4-wheel-drive V8 are 16 mpg in city driving, 22 mpg on the highway, and 18 combined. This reviewer’s 114.4-mile trip with 68 percent city-type driving averaged 14.43 mpg. (Dedicated fuel-economy seekers should note that the turbocharged 3.5-liter EcoBoost V6 with slightly higher EPA ratings is available in the Platinum.) Gas-saving automatic start/stop technology is applied to all 2018 F-150 engines.

The Platinum is well dressed with 20-inch polished-aluminum wheels with 275/55R20 tires (all-terrain tread on 4x4s); bright grille trim; body-color bumpers; a chrome exhaust tip; LED fog lamps; heated power side mirrors with LED spotlights; LED taillights; and an interior bedecked with genuine wood accents, leather-upholstered front bucket seats, and a heated leather-wrapped steering wheel. The test truck had a dark-red-and-black interior motif, with generous areas of soft, pliable material on the top the dash, the upper half of the doors, and the door armrests. 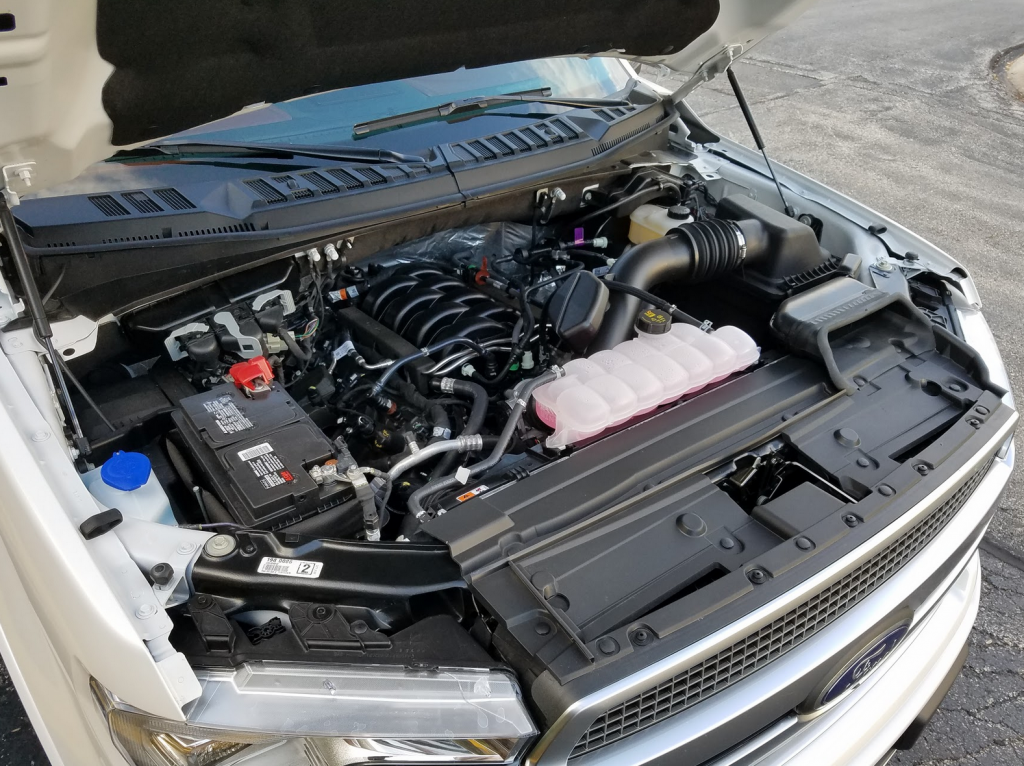 Sync 3 functions are easily managed on a colorful 8-inch touchscreen, though the audio system has actual knobs to turn the power on or off and tune stations. A bank of buttons accommodates saving six “favorites.” The climate controls are sited below these audio controls. Dials regulate temperature but repetitive push buttons govern other functions, and controls for things like fan speed and front seat heating/cooling are placed very low. Rear passengers have their own seat-heat switches on the back of the console. The tach and speedometer dials are big and easy to read. Between them is a large configurable vehicle-information display that can be manipulated by thumb buttons on the steering wheel. A dial to the left of the audio buttons puts electronic selection of two-wheel, four-wheel-high, and four-wheel-low driving modes within easy reach.

The cabin is extremely roomy, with excellent head- and legroom in either row. (Even the optional twin-panel moonroof on the test vehicle didn’t have much of an effect on overhead space.) A dead pedal for the driver’s left foot is a nice touch—the big floor space in large pickups often leaves this driver looking for a comfortable place to prop his foot, and this device is just the ticket. The wide rear bench seat and almost total absence of a central floor hump make 3-across adult seating a legitimate option. Doors open wide for easy entries and exits; the power running boards keep the climb into the 4×4 F-150 from becoming a chore. Even with the standard electronic watchdogs at their service, drivers will find the large windows helpful—though looking over the left shoulder finds the B-pillar right in the line of sight.

Personal-item storage begins with a sizeable glove box and a cavernous covered console box. The console holds two open cup holders. A small exposed bin at the front of the console, illuminated at night by ambient lighting, contains a pair of USB ports. Long pockets are found in all doors. Rear passengers have use of pouches in the backs of the front seats. A pull-down center armrest incorporates a pair of pop-out cup holders. Power-plug receptacles are found in the dash and console. Rear seat cushions quickly flip up to create a very large cabin-wide interior storage space.

Ford’s reliance on rear leaf springs means the ride—at least without a load—isn’t quite as comfortable as in rival pickups with coil springs, but it still does an impressive job of managing the hopping and bouncing traditionally associated with this setup. Save for the high-performance Raptor model, F-150 SuperCrews come in one of two wheelbase lengths: 145 inches with a 5.5-foot cargo bed or 156.8 inches with a 6.5-foot bed. The “short-bed” test truck was fairly maneuverable for a vehicle of its size, with easy steering and responsive braking.

The raft of updates and enhancements that the F-150 receives for 2018—particularly the across-the-board application of that slick-shifting 10-speed automatic transmission—should help Ford’s perennially popular hauler retain its best-seller credentials.

Thanks in part to its nicely boosted steering and responsive brakes, the F-150 SuperCrew short-bed is about as tractable as a full-size quad-cab pickup with a 145-inch wheelbase can be.