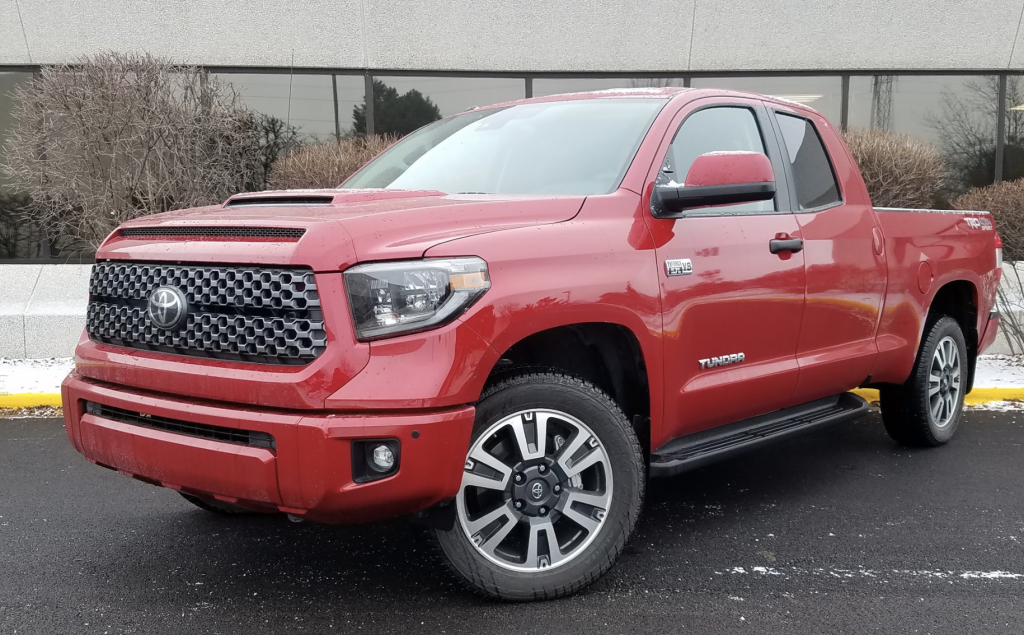 The not so good: Ride, fuel economy, visibility, lacking some modern features

In the world of pickups, you’re either Chevrolet, Ford, GMC, or Ram … or you’re eating their dust. And that’s not a position in which Toyota is used to being. 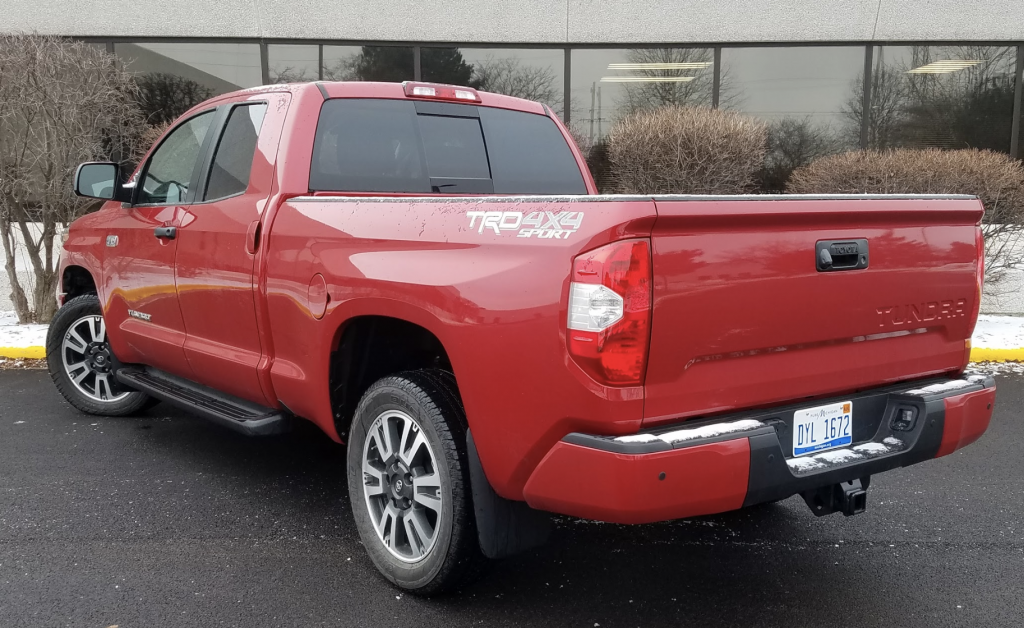 Our tester was equipped with the $3355 TRD Sport Package, which includes some suspension upgrades, hood scoop, body-colored grille and bumpers, and rear-fender decals.

But Toyota’s Tundra full-size pickup, introduced for the 2000 model year, has yet to really gain a foothold in what has become one of the American manufacturers’ last bastion of sales superiority. Which perhaps explains why it hasn’t received updates at the pace its U.S. counterparts have enjoyed.

In fact, over two decades of production, it has really only been redesigned once: way back in 2007. Meanwhile, its rivals — including the even slower-selling Nissan Titan — have all been redesigned within the past four years. If you’re keeping count (and we’re betting Toyota is), Ford sells nearly nine F-150s for every Tundra that rolls off the lot.

Last year we tested a very similar 2018 Toyota Tundra SR5 Double Cab, so we invite you to read that report for more details. Here we’ll touch on what’s new and different about this 2019 version, along with some of its finer details.

Topping the “news” chart for 2019 is that Toyota’s Safety Sense-P (TSS-P) suite of safety features is standard on all Tundras. This includes forward collision warning and mitigation with pedestrian detection, lane-departure warning, adaptive cruise control, and automatic high beams. Included in our tester’s $1000 TRD Sport Convenience Package (seems “Safety Package” would be more apropos) were blind-spot and rear-cross-traffic alert along with front and rear obstacle detection. With that, the Tundra’s safety features are at least up to date. 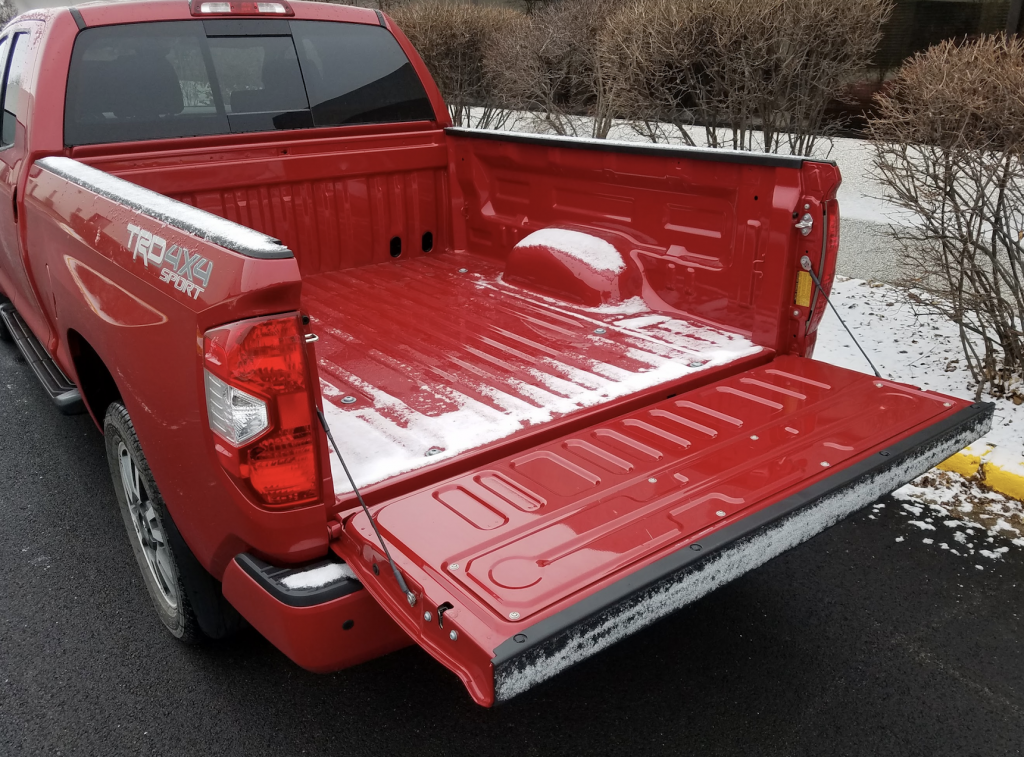 The damped tailgate is nice, but we rather missed having an integrated or swing-down bumper step, as it’s quite a leap into the bed. Tester included a power sliding rear window, great for carrying long items when you only have a 6.5-foot bed — though an 8.1 footer is also offered with the Double Cab body style.

Other things are perhaps less so. All four American makes offer full-time 4WD — which can remain engaged on dry pavement for convenience sake — but Tundra only offers a part-time system — which should not. Also, Tundra’s maximum towing capacity of 10,200 lbs. and payload of 1730 lbs. significantly trail those of some rivals.

So does fuel economy. All Tundras save for the base SR come standard — and only — with a 381-horsepower 5.7-liter V8 tied to a 6-speed automatic. (The SR gets a 4.6-liter V8.) While powerful and responsive, the combination 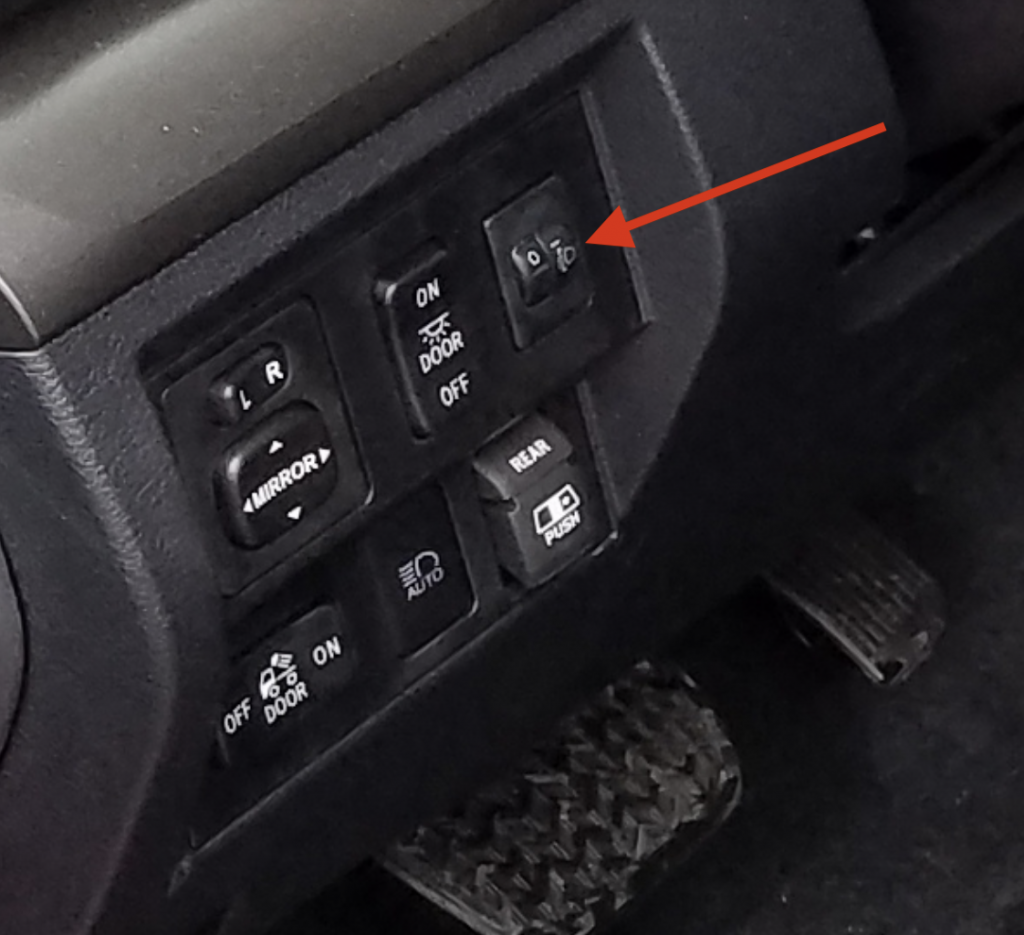 Another appreciated feature was the height-adjustable headlights (adjustable with a handy dashboard “roller” — arrow), which can compensate for heavy loads in the bed. Right below that is the sliding rear window switch.

falls short in terms of fuel economy, with most rivals offering smaller V6s or turbocharged engines with more transmission ratios. EPA ratings for a 2-wheel-drive Tundra with the 5.7 come in at 13 city/18 highway/15 combined; all its domestic rivals offer powertrains that beat those by at least 5-7 mpg.

Although they’re waning in popularity, Tundra is the only full-size pickup that doesn’t offer a regular-cab body style; just the Double Cab (extended cab) tested and the Crew Max crew cab. And though the Double Cab can be had with our tester’s 6.5-foot bed or an 8.1-foot bed, the Crew Max comes only with a 5.5-foot box.

Another area in which the Tundra falls a bit short is in ride quality. The king here is the Ram 1500 — with its exclusive coil-spring rear suspension — but some others aren’t far behind. Granted, our tester was fitted with the TRD Sport Package — which replaces the standard 18-inch wheels with 20s and includes “sport tuned” anti-sway bars and Bilstein shocks — but it hopped over bumps and you could feel more of the pickup-typical frame reverberation than is evident in most competitors.

That may all make the Tundra sound like an “also ran,” but it really isn’t; you just have to want the comparatively limited choices it offers.

For instance, yes, it doesn’t get great fuel economy, but that big 5.7-liter V8 sure puts out the power. Despite a fair amount of wheelspin from a full-throttle launch, our tester averaged 6.8 seconds in the 0-60 sprint, and the transmission provides quick kickdowns when the throttle is stabbed at speed. Also, the SR5 Upgrade Package includes a 38-gallon fuel tank (in place of the SR5’s stock 26.4-gallon one), which gets you back some of the driving range the fuel economy sacrifices.

And yes, it may not have terrific tow/haul ratings, but how many folks need more than the roughly 1500 lbs. of payload and 9900 lbs. of towing capacity our Double Cab 4×4 offers? 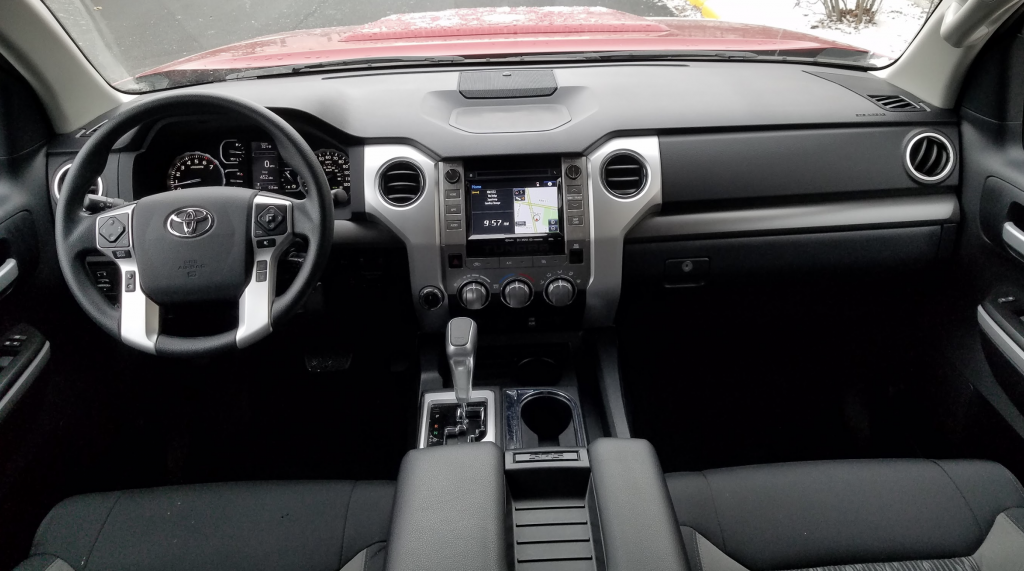 Like most full-size pickups — at least those with a center console box — Tundra offers ample interior storage space. 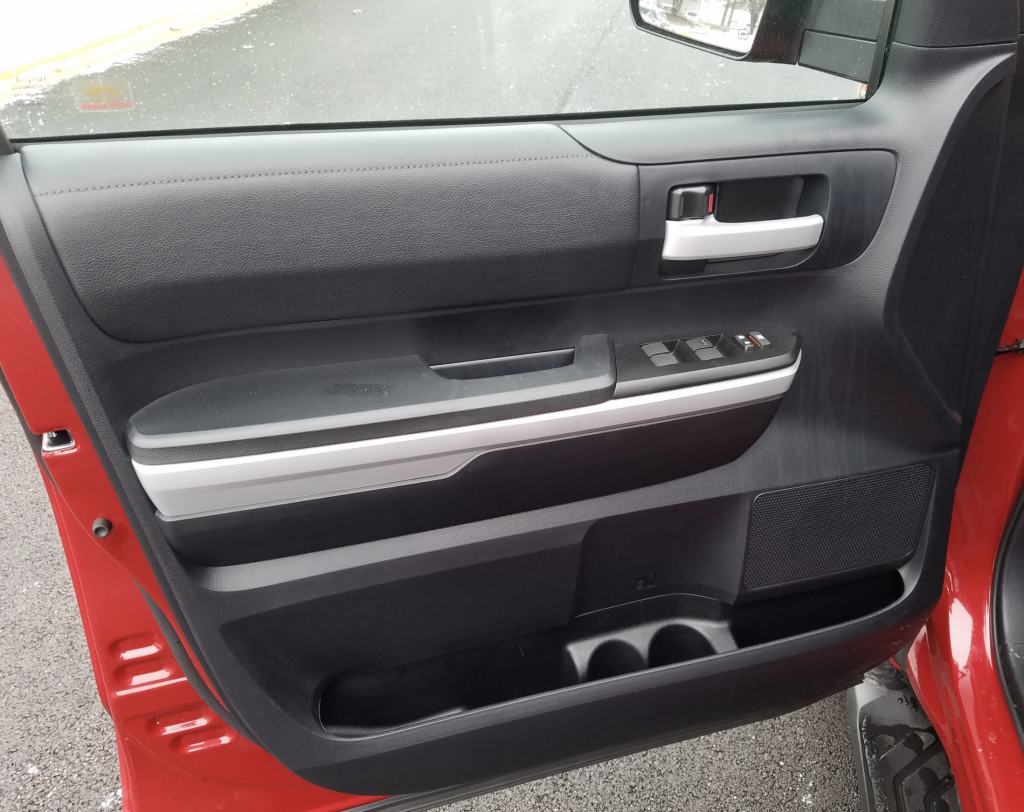 Although the dashboard is topped with hard plastic, the door tops and armrests — the primary touch points — are padded, and doors include huge map pockets.

Keeping in mind that the tested SR5 is just one grade up from the “workaholic” SR, its interior furnishings didn’t look cut-rate. Yes, the dashboard was all hard plastic, but the door tops and armrests — the real “touch points” — were padded, and the trim looked quite nice. Our tester’s $945 SR5 Upgrade Package included front bucket seats to replace the standard bench, and that brought a power driver seat with lumbar adjustment (nice), along with a huge console box and numerous other storage cubbies.

As other full-size pickups have gained a lot in their recent redesigns, the Tundra is showing its age. But it still offers a lot for the money … along with the reliability and resale value long associated with the Toyota name.

Its raked rear roof pillars give the Tundra a rather sporty profile, something the strong powertrain and our tester’s “sport” suspension and 20-inch alloy wheels support. The Double Cab short bed is the shortest Tundra available, as it’s the only full-size pickup that doesn’t offer a regular-cab version.