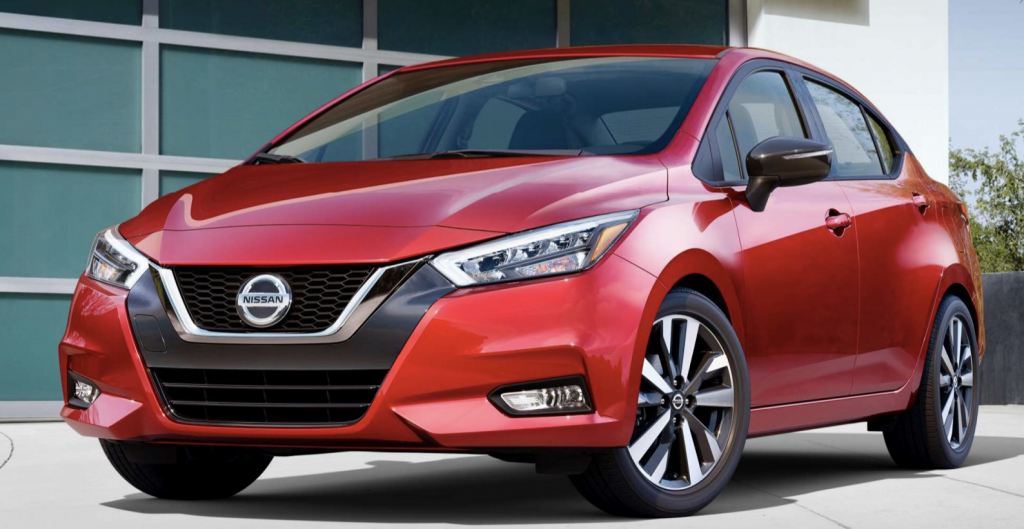 Since its introduction for 2007, the Nissan Versa’s claim to fame has been that it was often the least expensive new vehicle on the market. So the biggest question going into the preview for the redesigned 2020 model in Nashville was, “Will it remain so?”

But what it does remain is a good value.

Versa’s “least expensive” title was earned despite the fact that it was a compact rather than a subcompact, making it a great first car or low-cost sedan for small families. And that’s still the case. But what it notably adds for 2020 is an extensive list of standard safety features, most of which weren’t offered last year and many being rare for the class. 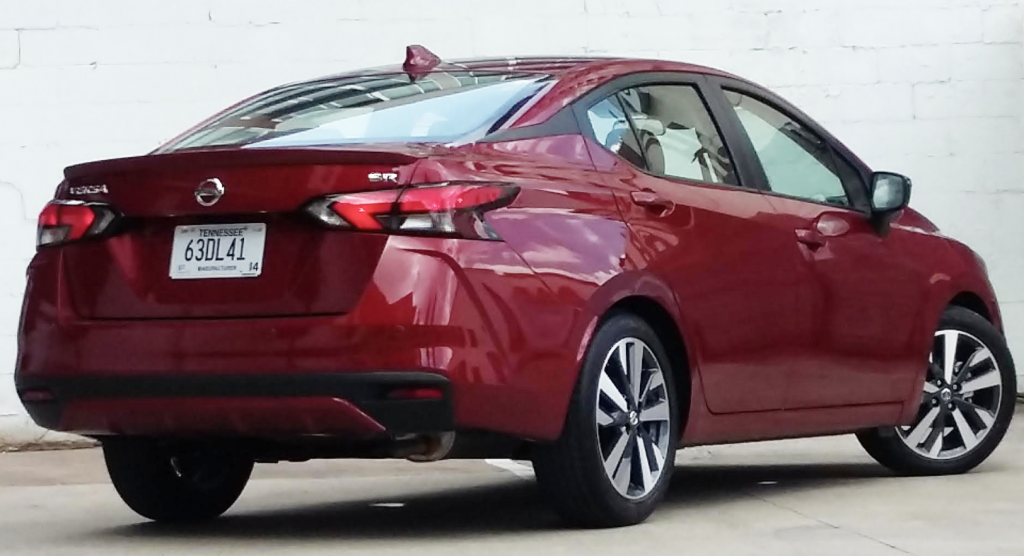 Along with being longer, lower, and wider, the 2020 Nissan Versa also adopts the company’s signature V-Motion grille and floating rear roofline along with swoopier sheetmetal — all of which gives it a ritzier look.

While the new Versa is a bit longer, lower, and wider than before, nothing much changes in the powertrain. A 1.6-liter 4-cylinder is again the only engine offered, though it jumps from 109 horsepower to 122, and is still mated to either a 5-speed manual transmission or CVT automatic driving the front wheels. The CVT — which will undoubtedly be fitted to most examples — carries an impressive EPA rating of 32 city/40 highway/35 combined, while the manual’s figures are 5 mpg lower. So the Versa’s “economy” focus carries into fuel costs as well.

Since we opened with a pricing notation, let’s get to the bottom line.

The 2020 Versa is offered in three trim levels. The base S is quite well equipped and starts at $15,625 (including the $895 destination) with manual transmission, $17,295 with automatic. Both figures are up significantly over 2019, but include a host of added equipment. Chief among these are an impressive list of high-tech safety features that include:

* Rear obstacle detection with automatic braking (rare for the class)

Two neat features we were surprised — and delighted — to see: A “Replay” function for the radio, and individual tire-pressure readouts for the Tire Pressure Monitoring System. The latter is particularly nice when lower temperatures cause tire pressures to drop (about one psi for every ten degrees), which will often turn on the tire-pressure warning light — without telling you why it’s on.

The top-line SR — which starts at $19,135 — adds some sporty interior and exterior touches along with 17-inch alloy wheels, automatic climate control, and keyless access and starting, along with an optional $300 Convenience Package with heated seats and adaptive cruise control. Optional on both the SV and SR are special paint colors for $395.

Notably absent from the equipment rosters are such high-end features as leather upholstery, power driver seat, power sunroof, and navigation system, but these are reasons to jump to the similarly sized Nissan Sentra, which also offers more-powerful engines: a 1.8-liter four and a 1.6-liter turbocharged four.

And based on our initial drives, those bigger engines aren’t a waste.

If the Versa has a limitation, it’s in power. What’s surprising about this is that the platform — including the powertrain — is shared with the company’s Kicks subcompact crossover, which strikes us as being somewhat more athletic, particularly in full-throttle takeoffs. However, kickdown response (when you dip into the throttle at speed) is quite good if not very energetic, and the ride seemed absorbent, if just a little less so in SRs with their 17-inch wheels wearing lower-profile tires. Note that the aforementioned Kicks — introduced for 2018 — effectively takes the place of the old Versa Note hatchback, which doesn’t return for 2020. 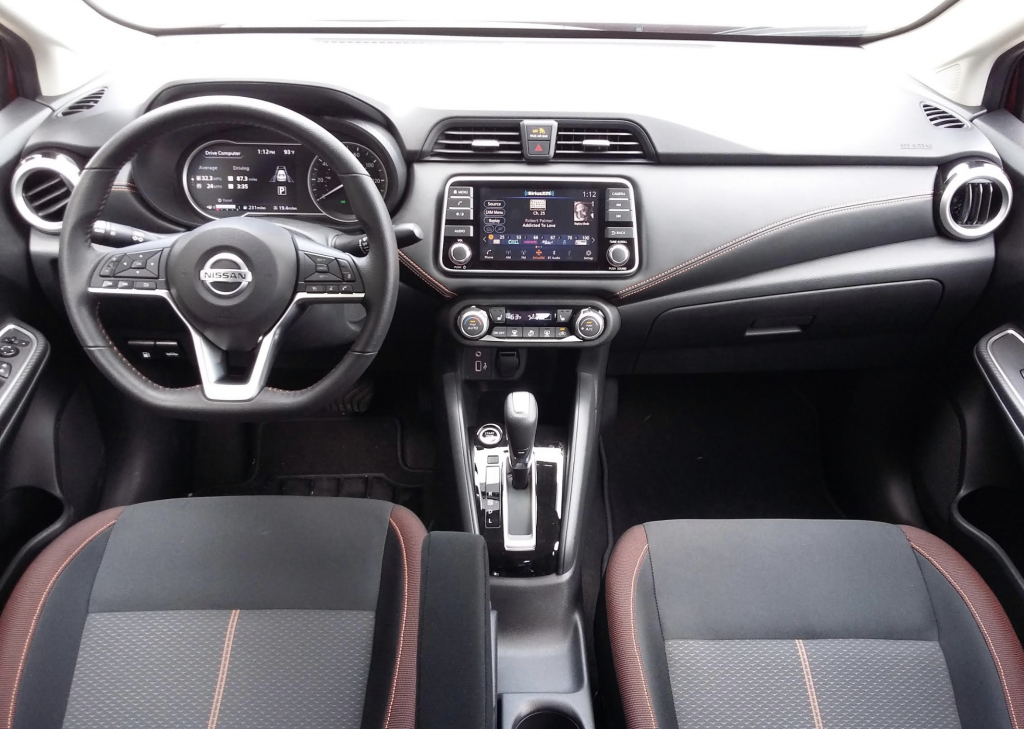 The top-line SR has sporty two-tone seats with orange stitching; SVs are available with a two-tone dash.

Inside, the Versa offers good passenger space for four — five in a pinch — but some sacrifices to cost are evident. No model has a console box (though SV and SR have fold-down driver-seat armrests), and S models are virtually devoid of interior padding, with SV and SR adding a padded dash face and just an unpadded “covering” on the door armrests. Versa also retains a traditional hand-brake lever rather than having a more modern electronic button that often allows for a Brake Hold function.

Visibility is good though not great. Ditto for interior storage, which includes a good-size glovebox, a forward console bin under Aux/USB/12-volt plugs, two cupholders, a shallow console tray, a left-side dash bin, and map pockets with cupholders in the doors.

The audio system includes a 7-inch touchscreen (the old Versa didn’t have a touchscreen) with volume and tuning knobs, and all are easy to reach and use. It also includes a “Replay” mode, which lets you go back and listen to something you missed or want to hear again. However, the “favorites” presets are by band, so you can’t mix AM/FM/satellite stations together. Climate controls are likewise easy to use.

The trunk is wide and deep, with some unpadded space under the floor in and around the spare tire. As in most sedans, the rear seat backs fold (on all but the manual-transmission S), but rest about five inches above the cargo floor.

Trunk space is impressive. It’s wide at the rear and deep top to bottom, though sickle-shaped lid hinges dip into the area. There’s a lot of underfloor space, too, but it’s “unofficial” as there’s no padded compartments, just space in and around the spare tire. On the down side, the folded rear seat backs — standard on all Versas but the base S with manual transmission — rest five inches above the level of the cargo floor, so long items can’t be easily slid forward … though that’s about par for the class.

While the Versa can no longer boast of being the least-expensive car out there, it does have a strong value equation going for it — at least if its available safety features are as valuable to you as they are to us. And that makes it an excellent first car or one for a small family, which is exactly what the Versa has always been.

It isn’t the low-cost car it used to be — nor does it look like it — but the new Versa remains a strong value.