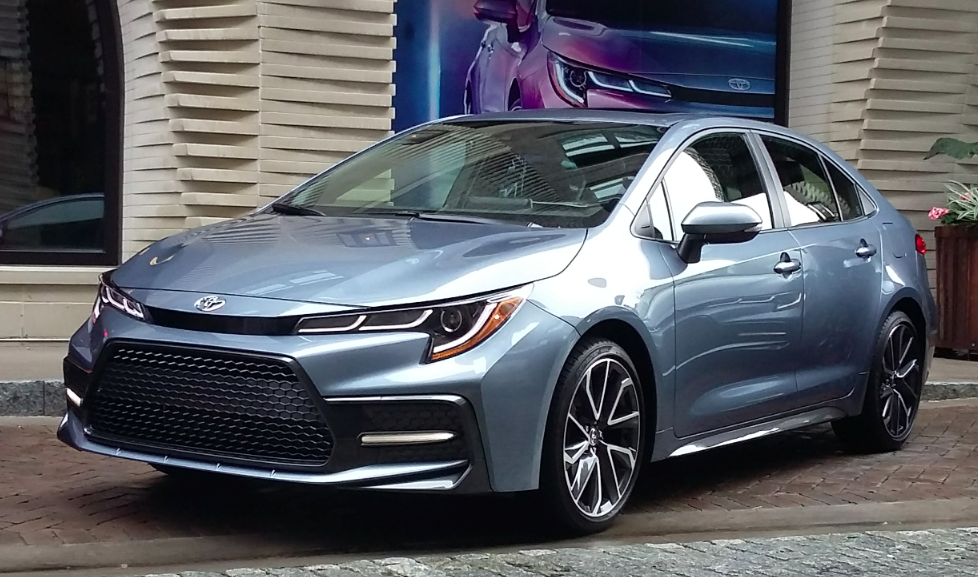 Over its more than 50 years of existence and 40 million units of sales, Toyota’s Corolla has built an enviable reputation for reliability and value. With the 2020 redesign of the sedan, Toyota hopes to add “sporty” and “thrifty” to its long-established virtues.

Not surprisingly, the new Corolla Sedan is based on the redesigned 2019 Corolla Hatchback introduced last year. In sedan form, it’s about an inch shorter and lower than before (but still about a foot longer than the hatchback), and the standard engine remains a 1.8-liter four but with a bit more power – now 139 horses – tied to a CVT automatic transmission. But newly available is the 2.0-liter, 169-hp engine fitted to all Hatchbacks – the most powerful engine ever offered in a Corolla – and it’s available with either a 6-speed manual transmission or a unique CVT automatic. (More on this later.) Corollas with the 1.8-liter engine are EPA rated at 30 city/38 highway/33 combined (1 mpg less on the “luxury” XLE), while those with the higher-tech 2.0-liter are even better at 31/40/34 with the CVT (38 highway on XSE versions), 29/36/32 with the manual transmission. As has long been tradition, all Corollas are front-wheel drive and seat up to five. 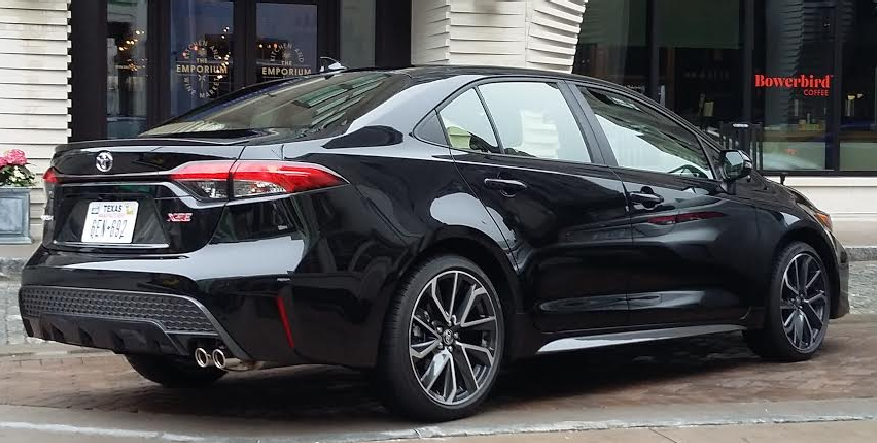 The top-line offering in the 2020 Corolla Sedan lineup is the sporty XSE, which carries a more potent 2.0-liter engine along with 18-inch wheels, dual exhaust tips, and a subtle rear spoiler.

Also offered for the first time is a hybrid version of the Corolla. This powertrain, too, was culled from another Toyota: in this case, the Prius, probably the best-known hybrid in the world. Also featuring a 1.8-liter engine tuned for increased fuel economy and teamed with two electric motors and a CVT automatic, the combination is good for 121 horsepower and – more importantly – EPA ratings of 53/52/52. These ratings are just a bit lower than those for the Prius, which is a dedicated hybrid platform with better aerodynamics. So far, at least, the plug-in powertrain of the Prius Prime isn’t offered in the Corolla.

One of the highlights of the Corolla Hybrid is that it boasts the same passenger and cargo space as its gas counterpart, as the nickel-metal-hydride battery is located under the rear seat. Yet while it costs about $1000 less than a Prius, the lone Corolla Hybrid trim level adds $3000 to the cost of its gas counterpart. Although combined (city/highway) EPA numbers are 19 mpg higher than those of the gas version, it would take about nine years to make up the initial price difference if you drive 10,000 miles a year on $3/gallon gas – though less time if you do mostly city driving (where the mpg difference is 23 mpg) or gas runs up to more than $3/gallon.

A Hybrid has been added to the Corolla lineup for 2020, as has an available 2.0-liter engine — with 30 more horsepower than the base 1.8 — that’s standard in SE and XSE models.

As mentioned, the Corolla adds features for 2020, both as standard and on the availability list. Even the base L comes fairly well equipped, with all the expected features plus LED headlights and taillights; Apple CarPlay (no Android Auto … yet); and Toyota’s Safety Sense 2.0 suite of high-tech safety features that includes forward collision warning and mitigation with pedestrian detection, lane-departure warning and mitigation, full-speed dynamic cruise control, automatic high beams, lane-keep assist, and road-sign assist.

But the $450 needed to jump to the LE seems like money well spent. For that you get heated outside mirrors, 16-inch wheels (vs. 15s), variable intermittent wipers, a flip-down rear-seat armrest with cupholders, remote keyless entry, and nicer interior trim. You also get the option of adding the $2000 LE Premium Package that includes blind-spot alert, power sunroof, alloy wheels, and keyless access and starting. The XLE comes with most of those features plus leatherette upholstery, 8-way power driver seat with lumbar adjustment, heated front seats, higher-end gauge cluster, satellite radio, and in-car WiFi, with optional premium JBL audio system, Qi wireless charging, and adaptive headlights.

Certainly the main appeal of the SE is its more powerful 2.0-liter engine and sport suspension, and it’s the only model to offer the choice of the CVT or a 6-speed manual transmission. But it forfeits some of the XLE’s equipment, much of which is added back on the line-topping XSE, such as heated front seats and blind-spot alert, with options that include Qi wireless charging, adaptive headlights, and premium audio system.

At the 2020 Toyota Corolla Sedan’s press preview in Savannah, GA, we had an opportunity to drive a gas LE, an LE Hybrid, and an XSE with the 2.0-liter engine – so three of the four powertrains offered (missing only the 2.0/manual-trans combination.) As we’d already driven a Hatchback with the 2.0, it came as no surprise that the XSE was the star here.

But let’s start with the base powertrain.

While acceleration in the LE is perfectly adequate for normal driving, it’s not much more than that. Floor the throttle from a stop, and the car moves off as if it’s not in as much of a hurry as you are, though it picks up the pace after 20 feet or so. And while hitting the gas at speed prompts a quick transmission kickdown, there’s not a lot of power on tap there, either. 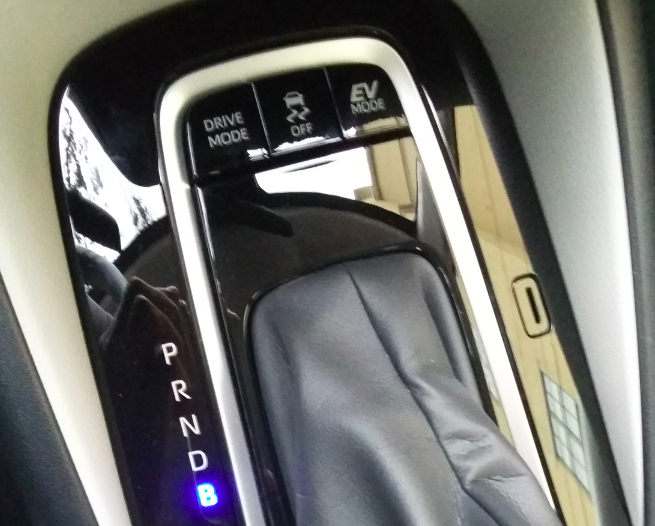 The Hybrid’s transmission includes a “B” setting that increases regenerative braking when lifting off the gas — a real convenience in city driving.

Although it has less rated horsepower, the Hybrid felt a little more spritely in a full-throttle launch, and at least as good when accelerating from speed. Thank the electric motors here, as they mostly add power down low, whereas horsepower is measured “up high.” The shifter includes a “B” setting that provides more regenerative braking when you lift off the throttle (meaning the car slows down more quickly than it otherwise would), which we find very useful in city driving.

And then there’s the XSE. Not only does it have more power both “down low” and “up high,” it also uses a different CVT transmission than what is hooked to the 1.8. This one uses a physical gear set for first gear, then shifts power to the traditional belt-and-pulley CVT for higher ratio adjustments.

The result is that the 2.0 feels significantly stronger, particularly under a full-throttle launch. Nail the gas from a stop, and the car leaps away with a chirp of the front tires. Response at speed is just as prompt as in the other models, but stronger.

Tire sizes vary considerably. The Hybrid and base L run on 15-inchers, the LE and XLE on 16s, the SE and XSE on 18s. Those with 18s also get a stiffer suspension, a rear spoiler, dual exhaust outlets, and some sporty interior and exterior touches.

Ride is often affected by tire size – as smaller wheels mean taller tire sidewalls (since tire outside diameters usually remain about the same), which tend to absorb bumps better – and that’s somewhat the case here. The Hybrid felt best over bumps, those with 16s and 18s somewhat firmer, though we’d want to test the cars over our rough Chicagoland roads to make a real judgement.

Most other elements we feel comfortable in judging based on our preview drives.

From behind the wheel, visibility is very good to the front-left corner, less so to the right front and in other directions, but overall it’s fairly good. A rearview camera is standard, but it only “sees” in about a 160-degree arc, not the 180 of the best, which would allow you to see both ways down a parking-lot aisle. 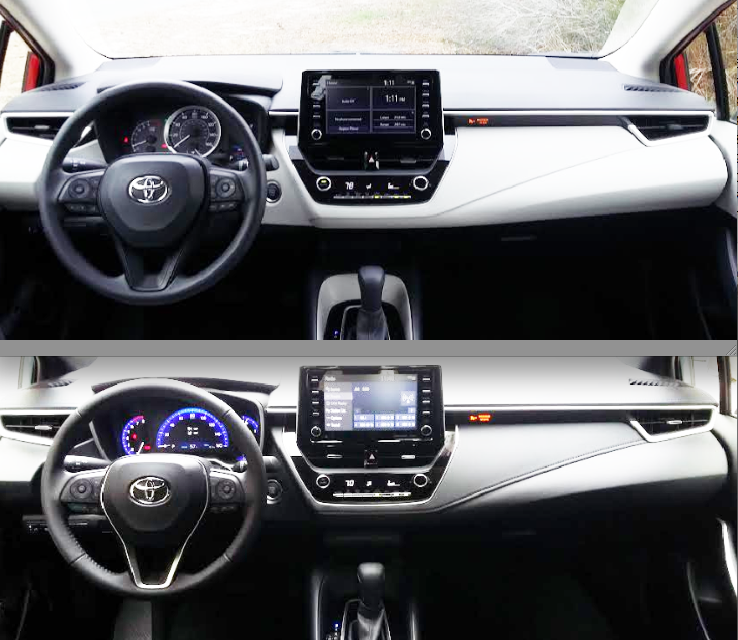 Padding covers more surfaces than is the norm in the compact class, at least in the SE and XSE, which include padded door tops the LE and Hybrid don’t. Audio and climate controls are very easy to use and reach, and the radio includes volume and tuning knobs along with several physical buttons. The climate system had nice rotary knobs for temperature and fan speed, a somewhat less-convenient repetitive-step pushbutton for mode.

Passenger space seemed a little on the tight side, even for a compact sedan. Really tall front-seaters would probably find headroom and legroom lacking, and though my 5’9 frame could fit in back with the seat ahead pushed all the way rearward, headroom seemed it would be tight for anyone much taller.

Interior storage space is just OK. The glovebox isn’t very big, nor is the console box, though the latter (at least on the XSE tested) includes USB and 12-volt plugs. The console contains two cupholders and a small forward bin that’s beside a USB plug that’s awkward to reach. 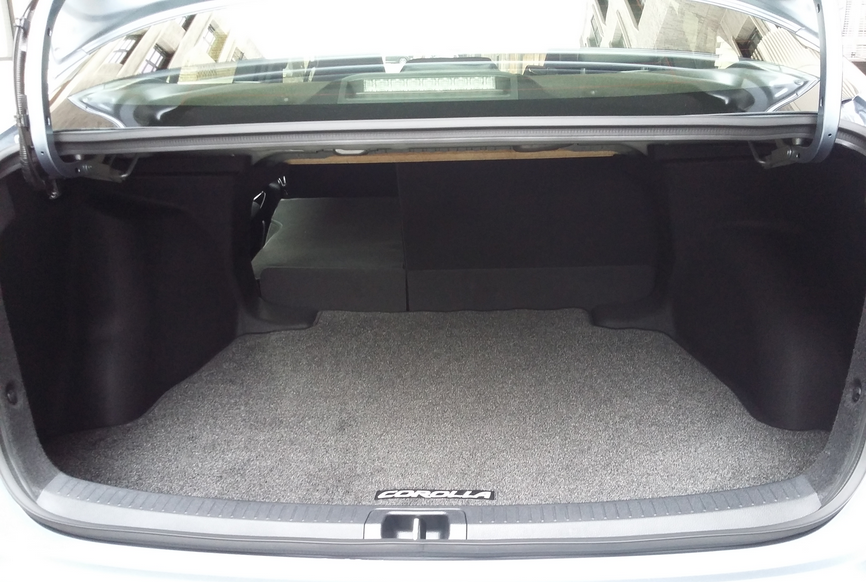 Though spacious enough, the Corolla’s trunk suffers from sickle-shaped hinges that dip into the load area, little (and difficult to access) under-floor storage space, and folded rear seat backs that rest five inches above the level of the cargo floor.

Trunk space is also nothing special. Though the lid opens wide, it’s on sickle-shaped hinges that dip into the load area. The trunk itself is wide at the rear, but there’s scant under-floor space – and it’s difficult to access as there’s no handle to lift the floor. Also, the folded rear seat backs rest about five inches above the level of the cargo floor, making it tough to slide long items forward.

With its heavily revised styling both inside and out, the numerous new features offered, and the newly added sporty and hybrid models, the Corolla strikes us as better than ever, though still not class-leading. But even the previous model sold impressively well for what had become an “old” design by 2019, indicating that the Corolla’s extraordinary reputation adds an attraction that goes well beyond what can be judged in a short-term preview drive.

The 2020 redesign gives the Corolla Sedan a sleeker look, with newly added features and additional powertrain offerings adding substance and even thrift and sportiness to the Corolla’s overall appeal.