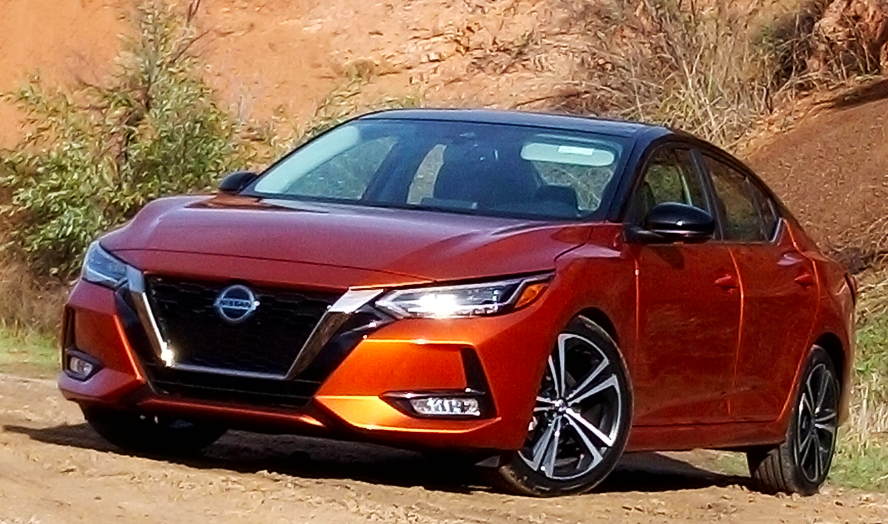 When the redesigned – and decidedly upmarket – Nissan Versa was introduced earlier this year, one of the biggest questions surrounding it was, “Will this spell the end of the Sentra?”

At the Los Angeles Auto Show last month, the company unveiled a redesigned 2020 Sentra that was moved somewhat upmarket itself. Lower, wider, and more powerful than before, it adopted some recent Nissan styling cues to become a somewhat more dynamic entry in the popular compact class. Like its smaller Versa linemate, it also added features, among them an extensive suite of standard safety items and some newly available comfort and convenience ones.

But let’s lead off with not only how the 2020 Sentra compares to its predecessor, but also to its Versa sibling.

First, the powertrain. Under the hood of the 2020 Nissan Sentra lies a 149-horsepower 2.0-liter four that adds 25 horses to the previously standard 1.8-liter, with the formerly optional 188-horsepower 1.6-liter turbo being dropped. That compares to 122 horsepower for Versa’s 1.6. While a manual transmission is standard on the Versa, the Sentra comes standard with a CVT automatic that’s also offered on Versa. EPA ratings for the 2020 Sentra are 29 mpg city/39 highway/33 combined (28/37/32 for the sporty SR), up a bit from before despite the power increase, and just slightly below those of the Versa.

About the same size as the previous-generation model, the redesigned 2020 Sentra remains longer than its smaller Versa sibling by 5.7 inches in length and 3.7 inches in wheelbase, some benefiting rear legroom.

Although lower and wider, the new Sentra hasn’t changed much in overall length or wheelbase, so those remain longer than the Versa’s by 5.7 and 3.7 inches, respectively. Both come in S, SV, and SR trim levels. 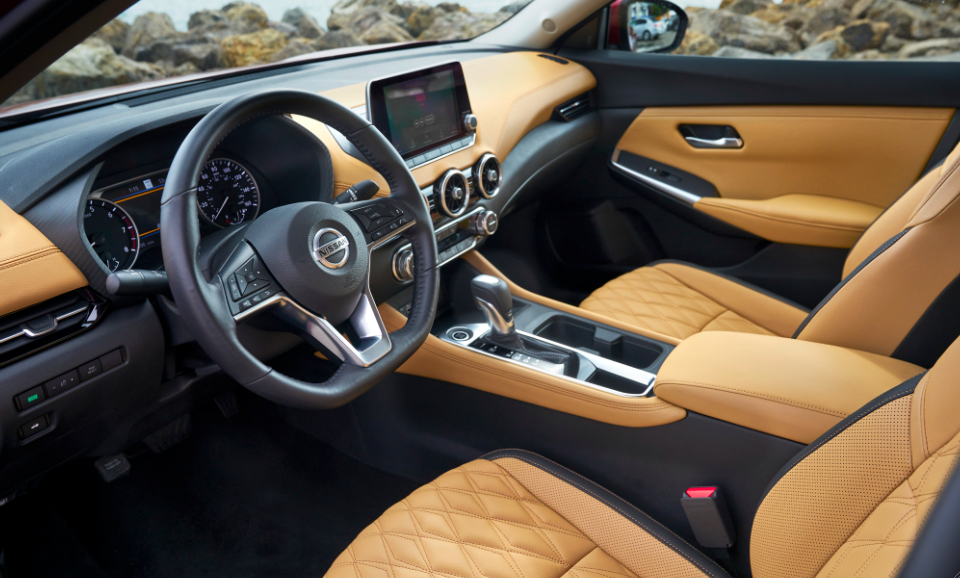 This two-tone interior with quilted leather upholstery is part of the $2460 Premium Package for the SV.

Now for the dynamics.

We found the Sentra gets a decent full-throttle jump off the line and builds speed in a linear if noisy fashion, with “downshifts” coming with the quickness we’ve come to expect from Nissan’s CVT automatic. We sampled SV and SR versions at the Los Angeles-area preview drive, and though the smooth roads didn’t provide much of a challenge to the suspension, the SR’s larger-diameter wheels with lower-profile tires seemed to ride – quite predictably – a bit more stiffly. But a better test will come with a drive around our Chicagoland headquarters.

More of a challenge was provided by the LA-area curves. Here the Sentra felt stable and planted with little body lean, though the steering was a bit on the heavy side in low-speed maneuvers. 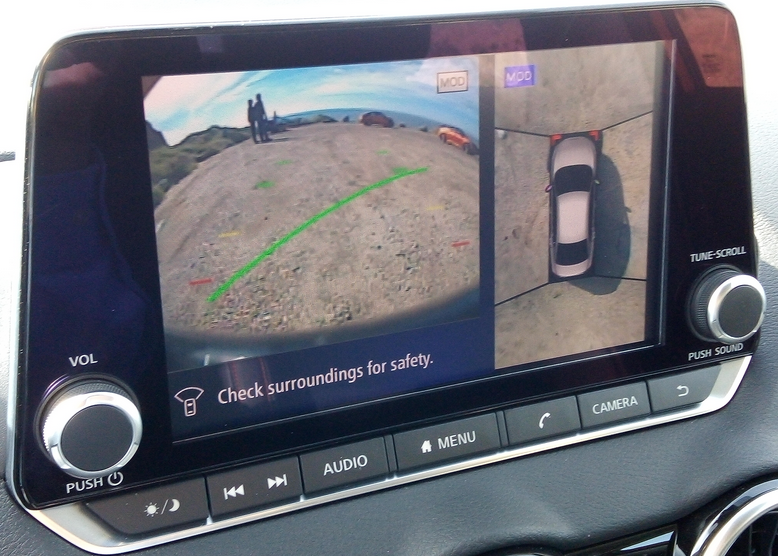 Among the features offered on the Sentra that aren’t on the Versa is a 360-degree camera system, part of the SR’s $2170 Premium Package.

Interior-wise, the Sentra should be able to accommodate 6-footers in tandem. Visibility is fairly good except to the rear corners and straight back, where thick roof pillars and a high rear deck block quite a bit of the view. Thankfully, a rearview camera is standard (though it only “sees” in a 170-degree arc rather than the 180-degree arc of the best), and the SR makes available a 360-degree camera system that allows a right-side curb view, handy when parallel parking.

Nissan’s “corporate” infotainment controls are used, and that’s a good thing: Volume and tuning knobs are augmented by some handy buttons, and the 8-inch touchscreen on SV and SR models tested (a 7-inch touchscreen is standard on the base S) is easy to decipher and reach. A bit less impressive are the climate controls, which – on the SV and SR, at least — use rotary knobs for dual temperature settings but less-convenient repetitive-step pushbuttons for fan speed and mode.

Interior storage space is about par for the compact course. Highlights are a large glovebox, decent-sized console box (devoid of plugs), two cupholders, a small console bin, and a large forward console bin under Aux/USB/USB-c/12-volt plugs, along with small map pockets in the doors. Rear-seaters don’t get their own vents (kind of surprising), but they do get USB plugs. 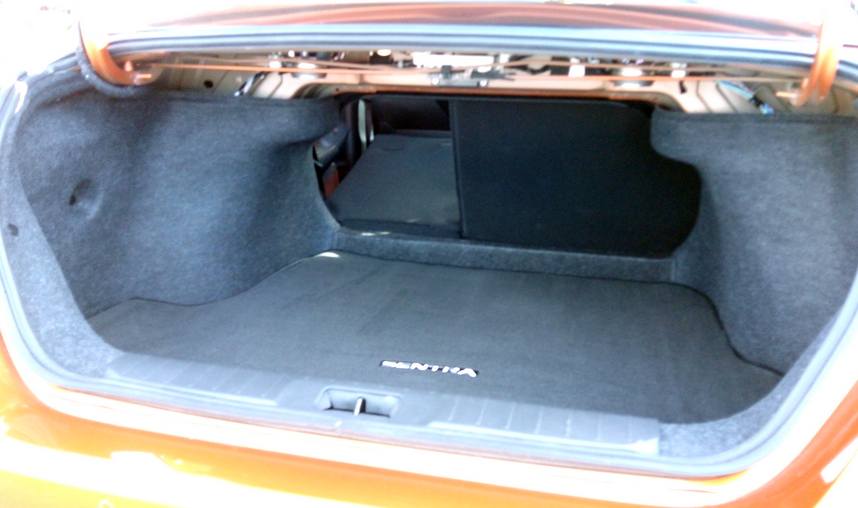 Though wide at the rear and reasonably spacious, the Sentra’s trunk has sickle-shaped hinges that dip into the load area, no under-floor space, and a 3-inch step from the cargo floor to the folded rear seat backs.

Trunk space is adequate, but unexceptional. The area is wide at the rear, but sickle-shaped hinges dip into the load area, there’s no real underfloor storage, and folding the rear seat backs results in about a 3-inch step that long items have to clear.

When it goes on sale in February, the base Sentra S will start at $20,015 including the $925 destination charge, or about $2700 more than the base Versa S with automatic. Sentra SV kicks that up to $21,195 with the addition of 16-inch alloy wheels (replacing steel), Apple CarPlay/Android Auto compatibility, Nissan Connect telematic services, 8-inch touchscreen (vs 7-inch on the S), dual-zone automatic climate control, and adaptive cruise control. Added on the $2460 SV Premium Package are LED headlights, 17-inch alloy wheels, a power sunroof, quilted leather upholstery, 6-way power driver seat with lumbar adjustment, and heated front seats, with Premium Paint colors (such as the Monarch Orange Metallic of our test car pictured here) being a $395 option. The sporty $22,355 SR comes with LED headlights, a rear spoiler, lower bodyside sills, and 18-inch alloy wheels, with the $2170 Premium Package bringing a power sunroof, heated front seats and steering wheel, Prima-Tex upholstery, 6-way power driver seat with lumbar adjustment, a Bose audio system, and 360-degree camera system. Additions above that include a black roof for $250.

What this means is that the Sentra offers more power and several features the Versa doesn’t. So to the question of, “Why does Nissan offer the Sentra?” the answer is pretty easy to explain.

Monarch Orange paint is a $395 option on SV and SR, but the black-painted roof is a $250 option offered only on the SR. It combines with the SR’s exclusive 18-inch wheels to make for a sporty-looking compact sedan that tips the price scale at just $22,950, or $25,120 with the SR Premium Package — which, except for the paint, is essentially the top-end sticker for a 2020 Sentra.