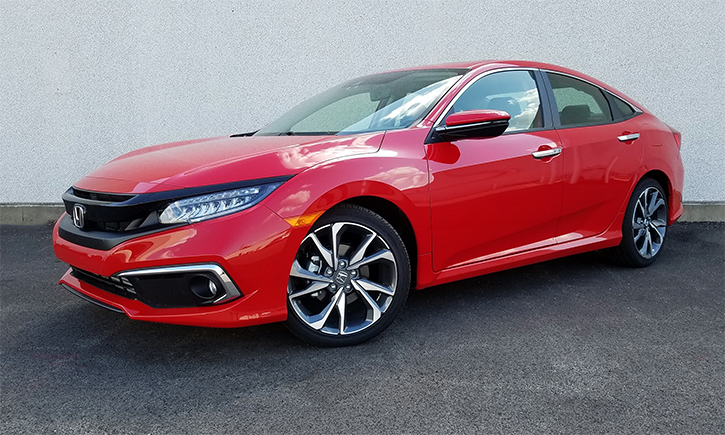 The not so good: Pricier than some class rivals; cabin quietness could be better

Twenty nineteen is a year for Honda’s Civic team to sweat the small stuff. It’s a year for righting some wrongs, and making some pretty good things a little better. It is perspiration well spent to make a very good compact sedan a little more so in the name of continuous improvement. 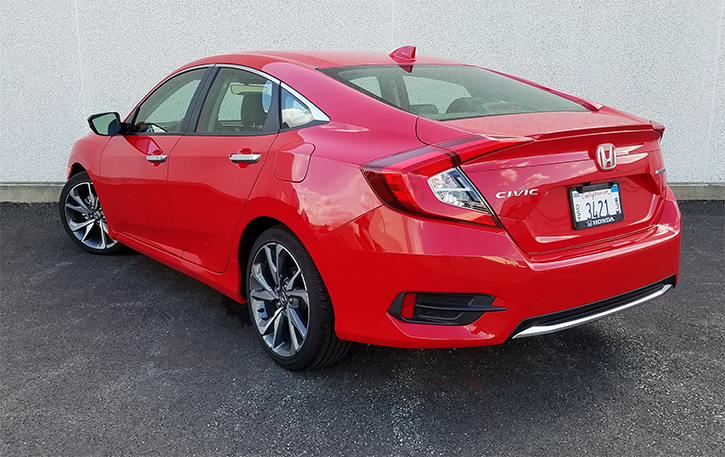 Here’s an example of what we mean: Who worries about the center console between design cycles? Honda did. It gave the ’19 Civic, which remains rooted in the generation that started with the 2016 model, a flexible new storage system. It now comes in layers that include a sliding armrest/lid top, an adjustable small-item tray within, and moveable cup holders. Sliding back the carrier for the conventional side-by-side twin cup holders exposes a larger single-drink holder that bigger gulpers will appreciate.

The Civic’s instrument panel has a clear, straightforward layout, and cabin materials are high-quality with a touch of sporty flair here and there. Rear-seat room is among the best in the compact-car class.

After taking some heat for an infotainment system with frustrating touch-sensitive controls, this has been revised to incorporate a stand-up volume knob and physical buttons that are more convenient. Among the other changes are additional sound insulation, redesigned steering-wheel controls, a mild coupe and sedan styling facelift, and the addition of a Sport trim level. 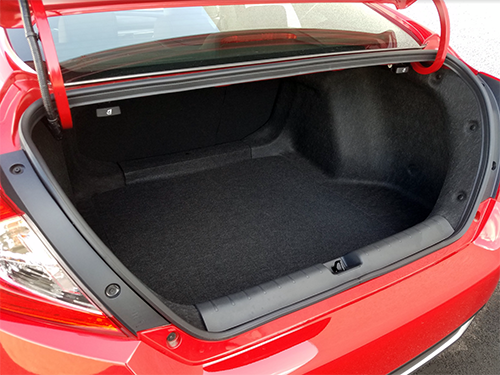 Consumer Guide, which considers the Civic a “Best Buy” in its price and size class, tried out a 2019 sedan in Touring trim. The Touring sits atop a five-step hierarchy of Civic sedans, but even then it stops hundreds of dollars short of $29,000 with delivery. The extras that make the Touring stand out in its family are satellite-linked, voice-activated navigation; digital traffic monitoring; 450-watt, 10-speaker audio system with subwoofer; LED headlights; 18-Inch alloy wheels; heated rear seats; paddle shifters for the continuously variable transmission (CVT); 4-way power adjustment for the front passenger seat; sport pedals; rain-sensing windshield wipers; and chrome door handles.

The Civic Touring presents a good-looking, well-built, and roomy interior. Rangy drivers can stretch their legs and not feel shortchanged for headroom, even under the moonroof. The 2016 redesign added 1.2 inches of rear legroom, which anybody who sits back there will appreciate. Three friendly—and skinny—adults might make it across the seat in a pinch if the middle passenger isn’t too tall. Drivers enjoy good visibility to just about every angle. Compressible soft-touch surfaces adorn the top of the instrument panel and much of the front door panels, though the tops of the rear doors have an inflexible grained-plastic. 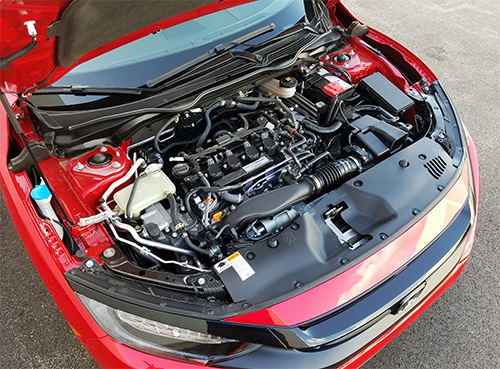 Interior storage choices are best up front. In addition to the useful console box/cup-holder setup, there’s a fairly large glove box and modest door pockets. In back there is a single storage pouch, affixed to the front passenger seat, cup holders in the pull-down center armrest, and small door pockets.

The trunk floor is flat, and it is pretty wide at the back, but narrows quite a bit between the wheel houses. Rear seats fold just about flat to extend the load space. However, a bulkhead behind the seats reduces the opening along the sides and bottom, which could cause loading problems for long objects.

Power comes from a now-familiar 1.5-liter turbocharged four-cylinder engine of 174 horsepower and 162 lb-ft of torque. It delivers safe, functional motivation. When the turbocharger kicks in after a little wait, the Civic feels peppy. The CVT slows down the climb to cruising speed, and the ability to selectively goose its performance doesn’t make that much of a difference—we doubt many owners will find it necessary to clean fingerprints from the back of the shifter paddles. EPA estimates for fuel mileage are 30 mpg in city driving, 38 mpg in highway operation, and 33 combined. This driver averaged 26.4 mpg after putting 173 miles  on the test car, with 70 percent of that in city-style driving.

Handling is pretty crisp, with light but responsive steering for easy maneuverability. However, less-than-perfect pavement can shake up ride composure, making it feel a little stiff. Even with the added sound insulation, some hard-to-hide road noise gets through.

On balance, the Honda Civic continues to be a leader in the compact field. It costs a little more than some, but it imparts a solid and fairly refined feel for the class. It’s the one a lot of rivals shoot for, the car they want to grow into being.

Just like its rakish roofline adds a bit of styling flair without significantly compromising passenger space, the Civic Touring sedan has an engaging driving personality that makes its day-to-day practicality a little more fun.