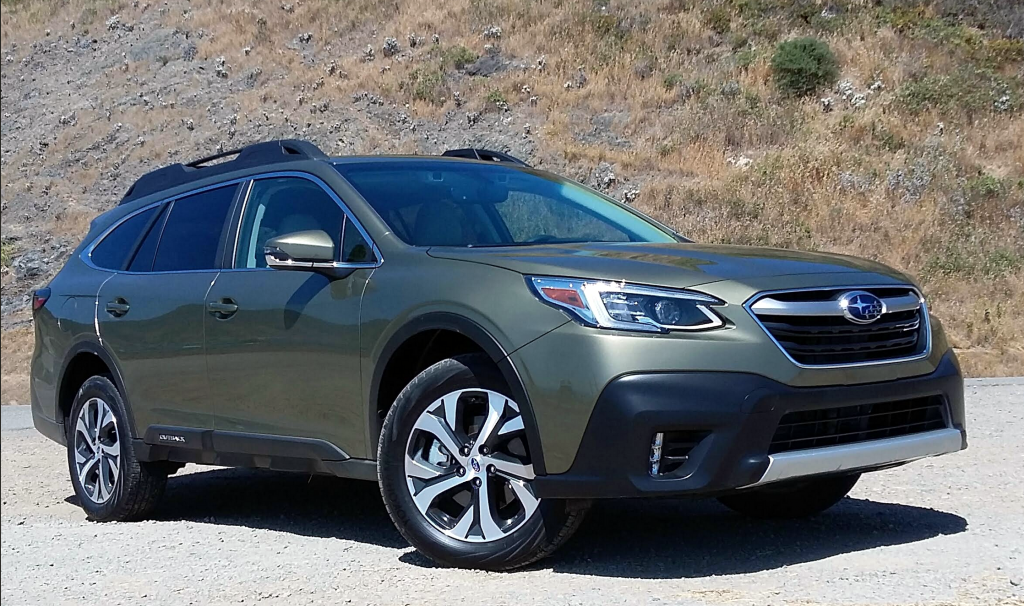 It’s probably not a stretch to say that the Outback is what put Subaru on the map. Introduced for 1995 as an SUV-flavored trim level of the Legacy wagon, it was soon upgraded to its own model, and sales have seen a steady climb since. Today – as for many years – it is Subaru’s best-selling vehicle.

For 2020, Subaru ushers in the sixth generation of the Outback. With it comes greater rear-seat and cargo room, some new features, and the return of a turbocharged engine. Also added is a new Onyx trim level that carries black wheels and trim along with special StarTex water-repellent upholstery.

New for 2020 is the “outdoorsy” Outback Onyx Edition, with black wheels and trim, water-repellent StarTex upholstery, and a front-view camera for off-road work.

While a modified version of the base 2.5-liter “flat four” engine returns sporting 182 horsepower, new for 2020 is a 2.4-liter turbocharged version with 260 horsepower; models so equipped carry an XT suffix. The turbo replaces a 3.6-liter flat six of 256 horsepower. Both engines are paired only with a CVT automatic transmission, and all-wheel drive is again standard.

Styling didn’t change much, so here are some visual cues that you’re looking at a 2020 model. Left to right: Fog lamps are now “stacked” triplets rather than round; new tie-down “handles” grace the front and rear of the roof rack; taillights are slightly reshaped, with the red lens edges being straight rather than wrapping around into the rear fender (just a blacked-out triangular area wraps around).

Seven trim levels are offered, some having option packages that add desirable features.

Two throwbacks: We’ve always like the compass being in the rearview mirror, and at least some models tested had a CD player — though the “slot” is under the console-box lid, just ahead of the open area in photo.

Next up the price ladder is the new $35,905 Onyx Edition XT, which gets the turbocharged engine, black wheels and trim, 180-degree front-view camera, hands-free power liftgate, and water-resistant StarTex upholstery. Optional are a power moonroof, navigation system, and reverse automatic braking.

Topping the lineup is the Touring, which goes for $38,755 with the 2.5-liter engine, $40,705 as the Touring XT with the 2.4-liter turbo. Its added features include a navigation system, DriverFocus, 180-degree front-view camera, ventilated front seats, heated steering wheel, and power moonroof.

Two really neat features of the 2020 Outback are a hands-free power liftgate that opens (with key in pocket) by holding your arm or hand next to the badge for a couple of seconds, and a cargo cover that retracts simply by slapping its edge. When removed, the cargo cover can slot into its own trough in the under-floor bin.

Cargo space is impressive, though it tends to be lower in height but longer in floor space than in a compact or midsize crossover. The rear seat backs fold level with the cargo floor via releases on both the seat back and in the cargo area – a nice touch. There’s also a good amount of underfloor storage, including a wide slot where you can stow the cargo cover. And speaking of the cargo cover, models tested had one that retracts simply by slapping its edge, another nice touch. The new hands-free tailgate works differently than most others: With key in pocket, you can hold your arm — possibly clutching groceries — next to the badge for a moment, and the tailgate opens. However, when unloading the cargo area – potentially clutching groceries — you have to press the button on the tailgate to close it; with some other hands-free liftgates, you swipe your foot under the bumper, same as to open.

For most uses, the standard 2.5-liter engine should be adequate. Certainly the turbo provides more power, but it sometimes suffers from dreaded “turbo lag” – a delay in power delivery before the turbo spools up – especially in a full-throttle start. However, the turbo would likely be more appreciated at high altitudes, where it loses less power due to the “thinner air” than the base engine. EPA figures are 26 city/33 highway/29 combined with the 2.5, 3 mpg less with the turbo.

We were only able to sniff out a few “road imperfections” on our northern California press-preview test route, but we also did some pretty severe off-road work. The Outback handled both with aplomb, feeling comfortable and solid under all conditions, while also providing more carlike handling than the typical taller crossover – a traditional Subaru strength. 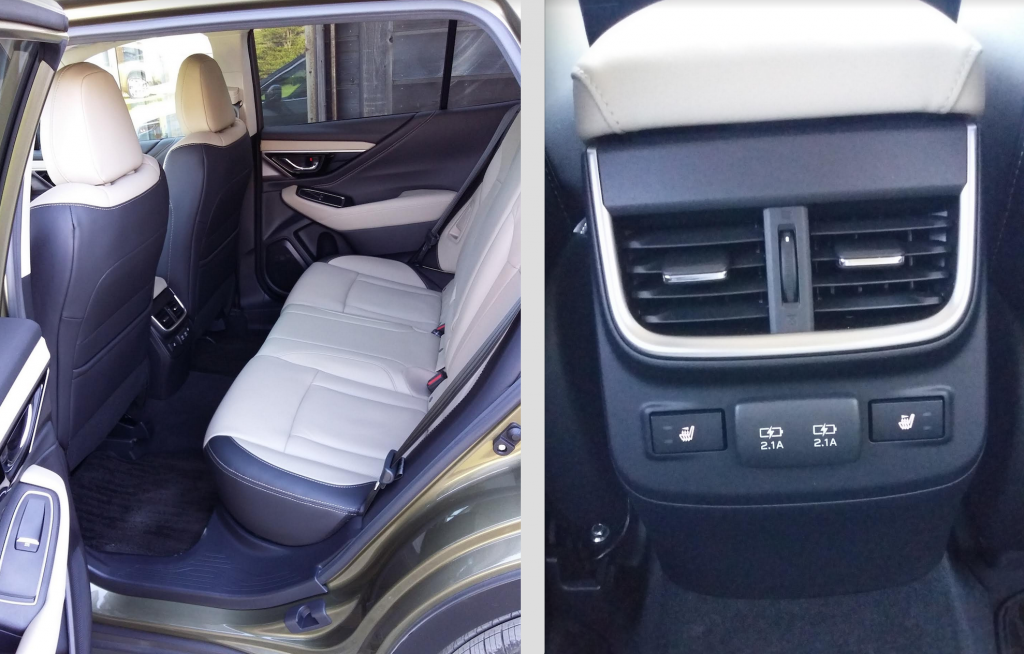 There’s lots of headroom and legroom in back, along with vents, heated seats, and dual charging USBs on higher-line versions.

Visibility – another long-time Subaru strength – remains very good here, aided when backing by a 180-degree rearview camera that can “see” both ways down a parking-lot aisle and includes a washer. We also really liked the 180-degree front-view camera offered on the Onyx Edition and Touring/Touring XT, which seems as though it would not only be useful in off-road work but also in city driving, such as when pulling up to an intersection or out of an alley.

Passenger space is especially good. Front seaters have plenty of headroom and legroom, and shorter folks may appreciate that the driver seat (at least the power seats we tested) go up really high. There’s equally good headroom in the rear seat, where my 5’9 frame fit easily behind a fully pushed-back front one, and getting in or out is a breeze.

All but the base Outback come with an 11.6-inch “tablet-style” touchscreen that also gets volume and tuning knobs and scores high marks for usability. Available are ritzy two-tone color combinations, as illustrated on this top-line Touring.

We only drove models with the 11.6-inch touchscreen, which includes volume and tuning knobs, along with on-screen station-preset “buttons” that can display a mix of AM/FM/satellite stations. The Touring model driven also had a CD player with the slot in the console. Overall, this system scored high marks for clarity and ease of use.

While we consider the Outback a midsize car, Subaru labels it a midsize crossover. And that’s not out of line. It rivals many midsize 5-passenger crossovers for people and cargo space, and its 8.7 inches of ground clearance rivals them for snow and off-road capability. Meanwhile, its lower build aids both ride and handling, which seem to surpass those of most crossovers. Add to that all the features the Outback offers – and at reasonable prices – and the sixth generation of Subaru’s most popular vehicle comes out looking to be its best.

Unique among non-premium midsize cars for its station-wagon body style with AWD, the “raised” Outback could easily be mistaken for a crossover — and should probably be considered by those shopping for one.