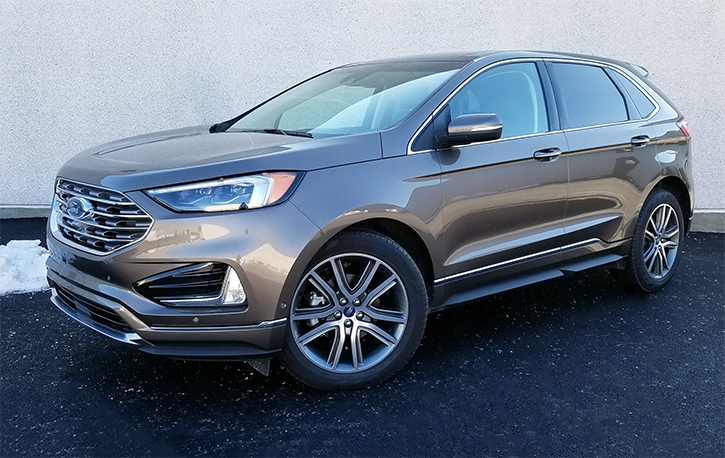 The great: Spacious cabin for both passengers and cargo, pleasant ride

The not so good: Steep pricing in decked-out top-line trim

For a vehicle as conventional as the Ford Edge may appear to be, this midsize crossover has enjoyed a certain degree of autonomy. Of the six best-selling vehicles in the midsize SUV class, only the Edge and the Jeep Grand Cherokee come solely in two-row, five-passenger form. If we discount the Grand Cherokee as direct competition (easy enough to do given its near-luxury positioning and off-road focus), Edge pretty much stands alone—or stood alone. More on that in a moment. 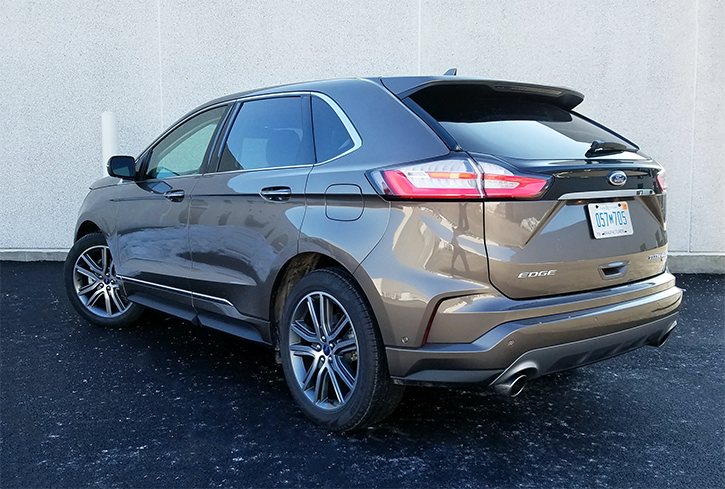 The Edge’s styling facelift for 2019 gives it a slightly more aggressive look–and keeps its 2015-vintage basic design looking fresh compared to the new Chevrolet Blazer and Honda Passport, as well as the redesigned Hyundai Santa Fe.

This positioning strategy has worked well for Ford, because dealers also offer the extremely popular Explorer for shoppers looking for that third seating row. To maintain its spot among the top-selling vehicles in the class, Ford has substantially updated the Edge for 2019, just in time to face new two-row competition from Chevrolet and Honda.

The Edge’s interior has an upscale look and feel, particularly in Titanium trim. The second row is spacious enough to comfortably accommodate adults, and the nearly flat floor makes three-abreast seating doable.

New for 2019 are the Blazer, which slots below the Traverse in Chevrolet’s crossover lineup, and the Passport, which is positioned just below the Pilot in Honda’s portfolio. Expect both vehicles to show up on the test-drive short lists of potential Ford Edge customers. Likewise, Hyundai’s redesigned-for-2019 Santa Fe is an another significant two-row SUV rival. 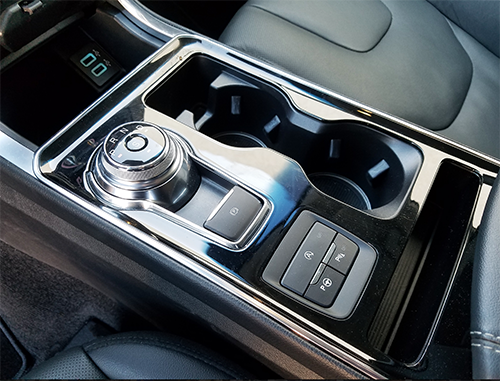 The Edge gets a redesigned center console for 2019 that includes an easy-to-use rotary-dial shift knob and a larger storage bin on the forward console.

Outside, the 2019 Edge features a new hood, grille, and lower valance up front, and new taillights and lower valance at the rear. Wheel offerings are also all new. Inside, a rotary gear selector replaces the conventional shifter, which frees up space on the leading edge of the console for a roomy storage bin in which a newly available wireless charge pad is located.

Base SE, midlevel SEL, and premium Titanium trim levels remain, while the previous Sport trim is replaced by a zippy new ST model. Standard on all is the Ford Co-Pilot360 suite of safety features, which consists of forward collision warning with automatic emergency braking, blind-spot monitor with rear cross-traffic alert, lane-keep assist, a rearview camera, and automatic high-beam headlamps. Also standard are rain-sensing windshield wipers and post-collision braking, which automatically applies brake pressure after a collision is detected to reduce the impact of a potential secondary collision.

An available Ford Co-Pilot360 Assist + upgrade consists of adaptive cruise control with stop-and-go capability, lane-centering steering assist, and Evasive Steering Assist, which will provide additional steering input if necessary to help avoid an imminent forward impact. Now standard on all Edge trim levels is the ability to remote start the vehicle via the FordPass Connect smartphone app, a subscription to which is free for 12 months.

Big changes come under the hood. Gone for 2019 is the 3.5-liter V6; the previously standard turbocharged EcoBoost 2.0-liter 4-cylinder is now the only engine for SE, SEL, and Titanium models. It produces 250 horsepower, up 5 from 2018. Across the board, a new 8-speed automatic transmission replaces a 6-speed unit. Front-wheel drive is standard, and all-wheel drive is available on all for about $2000 extra. The exception is the ST, which comes standard with all-wheel drive and a 335-horsepower turbocharged EcoBoost 2.7-liter V6.

Consumer Guide recently evaluated a front-drive Edge Titanium equipped with the comprehensive 301A and Titanium Elite packages, which pushed its bottom line price to $44,890 including the destination charge. Titaniums come standard with wireless device charging, Bang & Olufsen premium audio, and hands-free rear liftgate that opens with the swipe of a foot underneath the bumper. The 301A package adds the Ford Co-Pilot360 Assist + features, as well as a navigation system, heated and cooled front seats, enhanced active park assist, and panoramic sunroof. The Titanium Elite appearance package further dresses things up via 20-inch bright-machined aluminum wheels and chrome inserts on the front fascia and bodyside cladding.

This author’s time with the Edge included picking up his daughter from college—roughly 350 miles each way—and I can report that the complete contents of a dorm room were easily contained in the Edge’s ample cargo hold. On the road, the Edge is neither as sporty as a Pilot nor as smooth-riding as a Highlander, but it settles in nicely at highway speed, and the comfortable front-row seats offer excellent support on long trips. Drivers of an enthusiast bent will find the Edge’s steering a little too light and uncommunicative in brisk driving. 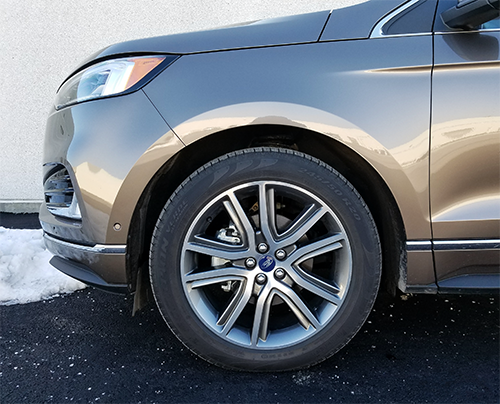 Power from the EcoBoost engine is satisfying, and there’s plenty of oomph on tap for passing and merging. Likewise, the new 8-speed automatic responds promptly to throttle inputs, and shifts with reasonable smoothness. Over almost 1300 miles, our editors averaged 24.6 mpg, close to the EPA estimate of 25 mpg in combined city/highway driving.

There is ample space for occupants in both seating rows, and large door openings make entering and exiting the Edge a snap. Relatively thin roof pillars help with outward visibility; the view from the driver’s seat is largely unimpeded in all directions. Cabin quietness is an Edge strong point; at speeds up to 75 mph on a gusty day, the Edge cabin remained peaceful enough for inside-voice conversation. In top-line Titanium trim at least, the interior ambiance is appropriately upscale. Materials are mostly high grade, and cabin fit and finish is on par with many luxury vehicles.

Though our impressively outfitted Edge listed for almost $45,000, well-equipped examples can be had for less than $40,000, and that’s where we see the value in this lineup. That said, our Titanium test vehicle presented well for the money.

Does the 2019 Edge have the goods to hold its position in the face of new two-row competition? Probably. Though the non-ST models aren’t particularly sporty, the 2019 Edge is spacious and refined, and that’s all many crossover shoppers are looking for.

Ford can spruce up the styling of the Edge and shake up the powertrain offerings all it wants, but it hasn’t messed with the good thing that is its interior space. For passengers, there’s plenty of legroom to be had in both rows and no worry about headroom. A practically flat floor makes 3-adult seating an attainable goal in the back seat. Meanwhile, there’s substantial easy-loading cargo space—even before the 60/40-split rear seats are retracted. 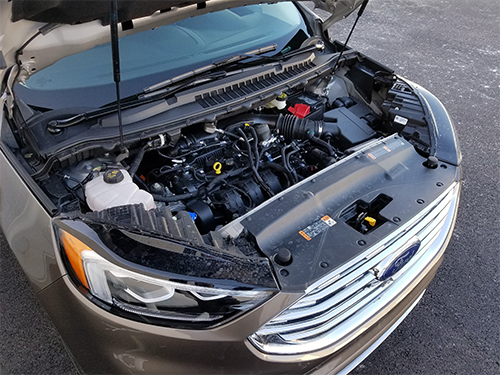 The Edge’s powertrain lineup is pared down a bit for 2019; save for the sporty ST model, all Edges are powered by a turbocharged 2.0-liter 4-cylinder that puts out 250 horsepower and is paired with an 8-speed automatic transmission.

Also, there’s nothing wrong with the storage options for personal items that passengers are wont to tote along on trips. The console has been redesigned around a rotary drive selector for the automatic transmission (it replaces a conventional lever) but there’s still a deep—if not long—console box, twin cup holders, and a covered hatch for USB ports and the wireless phone charger that is standard in the Edge Titanium.

Our test vehicle’s 2.0-liter turbocharged EcoBoost 4-cylinder engine had the same kind of spunk we’ve experienced from older Edges with this powerplant. The new 8-speed transmission kicked down smartly for pleasing highway performance, but at times in street driving this driver could sense it “at work” to a slightly higher degree than other of the latest autoboxes. With several opportunities for some sustained high-speed expressway commuting, this reviewer averaged 19.47 mpg with 46 percent of test miles under city conditions.

The leather-upholstered Titanium makes for a pretty plush Edge at $39,545 to start with delivery. However, CG’s test truck had a couple of packages—one clearly for appearance—that pushed the total to almost $45,000. Still, that shouldn’t stop anyone in the market for a midsize SUV from visiting a Ford store before they buy. 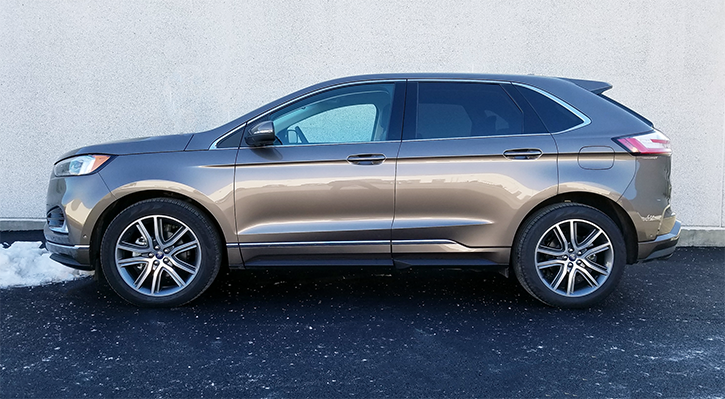 The Ford Edge receives a nip-and-tuck freshening for 2019 that nets it a number of upgrades and desirable new features that help keep it a viable competitor… just in time to do battle against new and redesigned class rivals.