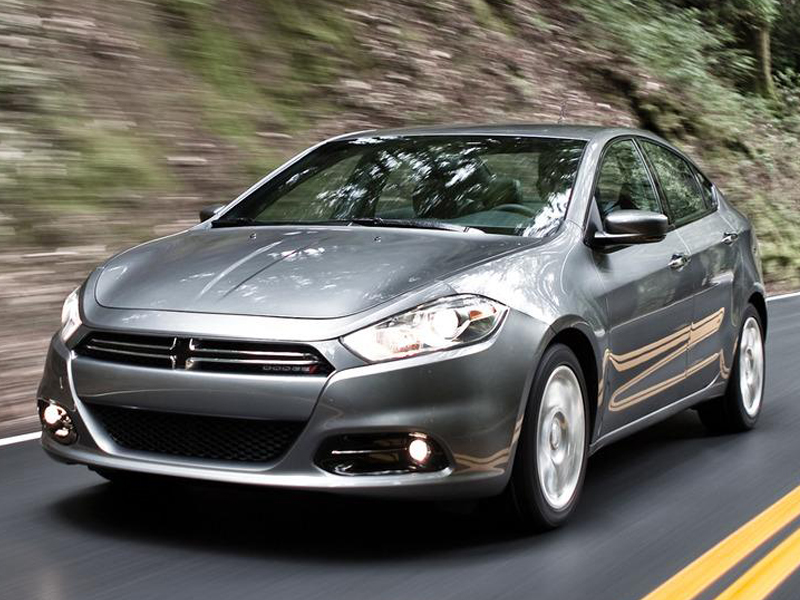 Our relationship with the Dart stayed warm over the past 12 months, even through the arctic chill that marked this winter.

About six months after Dodge resurrected the Dart name for a new compact sedan, a dark-grey, top-line Limited model arrived to begin a year-long evaluation.

At the time, the Dart was significant not only because it wore a beloved name from Dodge’s past, but because it was the first jointly developed product to come out of the newly minted Chrysler Corporation/Fiat alliance. Although it was built in Illinois, much of the Dart’s design was based on the Alfa-Romeo Giulietta (Alfa is a division of Fiat) offered in Europe. 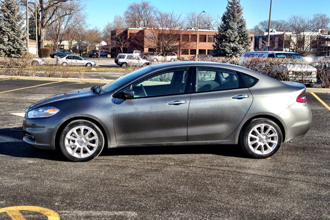 Our Dart on the day it arrived. Our tester featured the 2.0-liter “Tigershark” engine mated to a conventional 6-speed automatic.

It sure didn’t look like it, however. All the Alfa influence was under the skin, while the “sunny side” was all Chrysler’s doing. So was the interior. And both were tailored to fit the American market.

Although the Dart’s starting price of $15,995 was among the lowest in the compact class, the car was really aimed at providing style and features most rivals didn’t. Exteriors could be dressed up with a wide variety of colors, wheels, and trim, along with “side-to-side” LED taillights reminiscent of the Dart’s sporty, full-size Charger sibling. Inside, the same applied, as the car was available with numerous high-end features and some nifty LED lighting.

Being equipped with the optional Technology and Premium Groups ($995 each), our Dart included such high-end features as leather upholstery, heated front seats, heated steering wheel (a class rarity), keyless access and starting, rear park assist, blind-spot detection, rear cross-path alert, automatic high-beam headlamp dimming, rain-sensing wipers, and remote start. Including the $795 destination charge, our tester came to $24,075. While that’s rather a lot for a compact, it’s really not for one so lavishly equipped.

For better or worse, Dart is somewhat heavier than most rivals in the compact class. On the positive side, that heft – or more specifically, the structure that contributes to it – was likely instrumental in making the car seem quieter and more solid than the class norm. Some drivers noted that engine and bump noise stood out as being a bit louder than average, and a few commented toward the end of the car’s stay that the steering column seemed to be making a creaking noise when turning. However, the general consensus was that wind and road noise were very low, and that overall, the Dart was among the quietest in the compact segment. 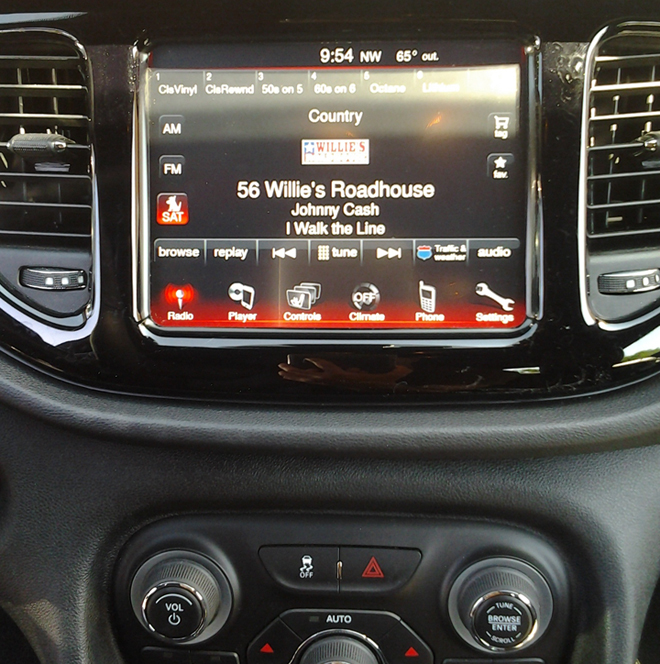 Our testers lavished praise on the Dart’s handling of satellite radio tuning. Instant information–and lots of it–made easy work of scrolling through 200 channels.

Many of our drivers felt that the Dart didn’t bolt away from stops when spurred; it took a few beats before it really picked up speed. Even then, the Dart isn’t really “quick” – more like “adequate.” However, this isn’t noticed in normal driving, where the Dart easily keeps up with traffic.

Fuel economy is another thing that suffers due to weight, but our tester did quite well in this regard. Over its 11,000-mile test, the Dart averaged 27.9 mpg. We feel that’s quite good, even though a long-term Honda Civic averaged 32.3. However, the Civic is one of the best in the class in this regard, and is a bit smaller and roughly 400-lbs lighter than the Dart.

Chrysler’s infotainment interface is known as U-Connect. It’s used on most of the corporation’s products – including our test Dart – and it generally draws favorable reviews. One tester was particularly impressed. “My favorite aspect of the Dart is actually the satellite radio. Not only are the station, artist, and song names emblazoned fully and largely on the screen, but the tuner knob is big and meaty (no button pushing is needed) and channels change instantly – no lag time as with most other systems.”

However, several other testers noted that it took a long time for the car to link up to a Bluetooth-enabled phone, and one felt that a few functions it absorbed, such as the heated seat controls, would be easier to use if they had their own, separate buttons. That goes for the heated steering-wheel control as well, yet one tester loved it anyway, calling it “a very nice touch in this category.” Another driver noted that both the U-Connect screen and the digital instrument panel allowed “a stupefying array of customization,” and indeed, these are both strong points in the Dart’s favor – as long as you commit the time to program them. Although some thought the dark-grey interior looked a bit bland, others liked all the padded surfaces (including the door tops) and bright accents, one proclaiming it among “the best in class.”

Dart Gets the Mopar Treatment

Style Matters: Why I Want a Dodge Dart

Despite the car’s size, some drivers felt larger folks might find rear-seat headroom scarce and the doors a bit small for easy entry and exit. There were also a couple of complaints about the side roof pillars blocking too much of the over-the-shoulder view. One tester called the driver seat “plush,” while another found the tall, narrow seat-cushion bolsters to be a bit confining on a long trip. Cargo volume drew some praise, one (after folding the rear seat back) calling it “better than class-competitive.” Another particularly liked the unique storage bin under the front passenger-seat cushion. 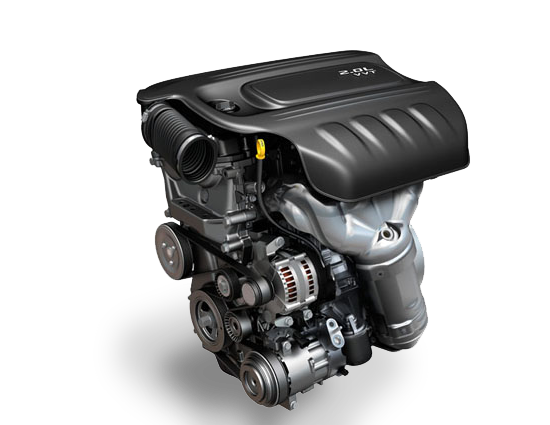 Though no powerhouse, the 2.0-liter Tigershark engine under our Dart’s hood was up to the task of most of our merging and passing needs.

Summaries of the Dart were telling, and overall, positive. But nearly everyone sited the car’s feature availability as being its greatest strength. “Our long-term Dart is equipped with about every convenience known to man,” said one tester. Another elaborated on that point. “I’m amazed at what’s available on this non-premium compact car: heated seats; heated, leather-wrapped steering wheel; remote engine start; big touchscreen; rearview camera; rear park assist system; blind-spot alert; rear cross-path detection; and much more. The volume of the audio system even increases automatically as the car’s speed increases. In interior design and feature availability, the Dart is BOLD.”

And that’s where the Dart makes its most compelling argument. Other cars in the class might score higher overall when it comes to a combination of economy, performance, and space, though the Dart is at least competitive in those areas. But few if any in this segment offer the depth of options available, and even if you don’t want all of them, those you pick can likely be had at a lower price point. So particularly if you want a “loaded” car at a less-than-loaded price, the Dart is a worthy addition to your shopping list.