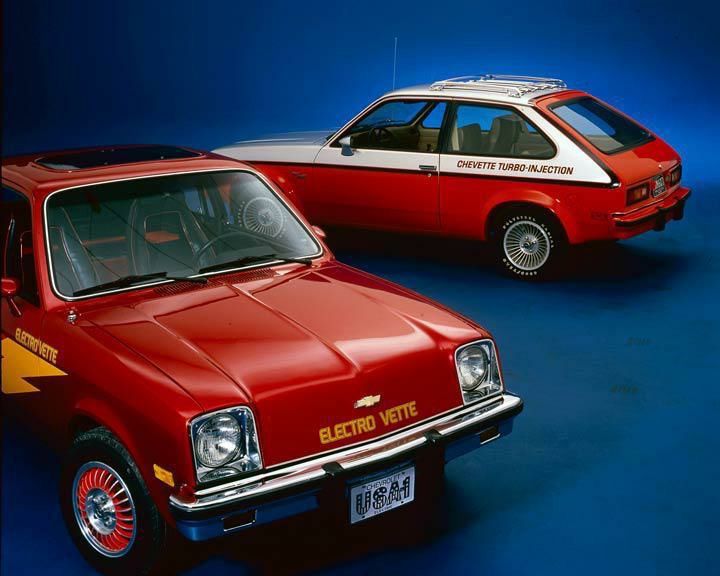 Chevrolet Electrovette Concept (foreground) and Chevette Turbo Injection. Both vehicles were based on the production Chevrolet Chevette. The Turbo Injection featured a turbocharged and fuel-injected version of the Chevette’s stock 1.6-liter engine. It made 100 horsepower–37 more than the standard mill. 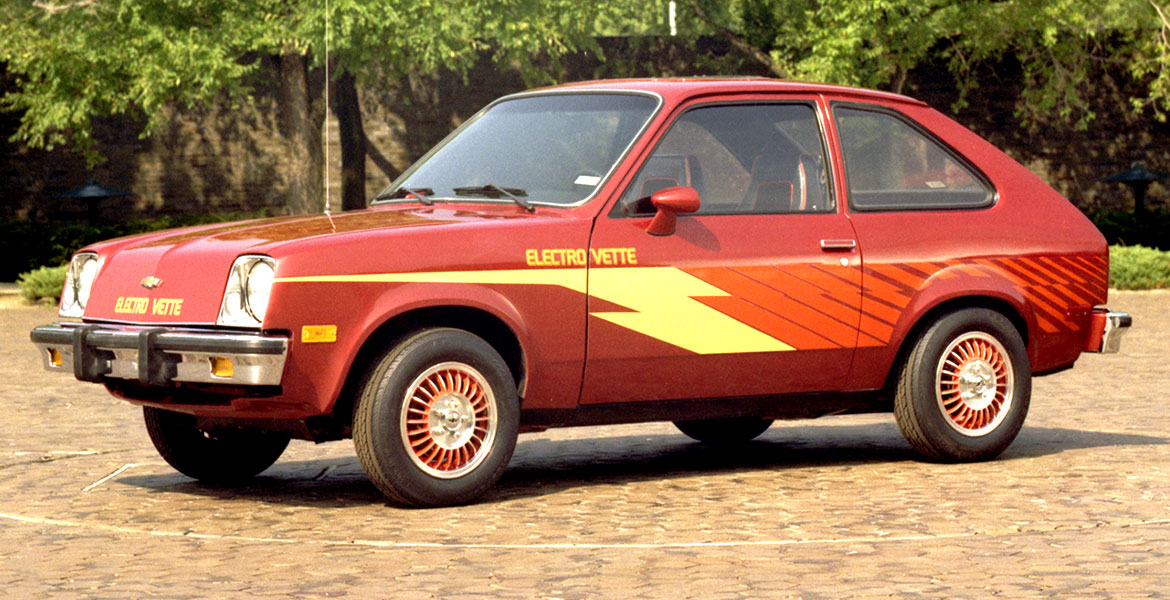 In this GM Styling photo, the Electrovette Concept is posed next to what appears to be a design prototype for the restyled 1979 regular-production Chevette. The Electrovette’s shortened wheelbase is apparent here.

Details: Though first shown to the public in 1978, work on the Chevrolet Electrovette Concept began in 1976. A response to the widely held belief that gas prices would surge to $2.50 per gallon by 1980, the Electrovette was designed primarily to be cheap to own and operate. Based on the production Chevrolet Chevette, the Electrovette featured a shortened wheelbase, and a battery pack positioned where the rear seat would normally be located. A 50 kW (63 horsepower) motor was shoehorned into the space normally occupied by a transmission.

The Electrovette was designed to be powered by nickel-zinc (NiZn) batteries, but their performance was disappointing, and they were quickly replaced by less-expensive lead-acid batteries. Chevrolet press materials claimed that the Electrovette was capable of traveling up to 50 miles at a constant 30 mph, and had a top speed of 53 mph.

As it turned out, gas prices stabilized at around $1.00 per gallon for most of the Eighties, limiting the commercial appeal of developing an alternative-fuel vehicle. The Electrovette was never seen on the auto-show circuit; instead, it was displayed at engineering and technology symposiums, and at shareholder gatherings.

At the time the Electrovette was retired, GM engineers frankly admitted that a battery breakthrough of some sort would be required before an affordable, consumer-friendly electric vehicle could be built in volume.

The Electrovette had a range of up to 53 miles.

CG Says: If we’ve learned anything from Tesla, it’s that acceptance of electric vehicles is a top-down proposition. Even today, EVs are sold primarily to wealthy consumers with a predisposition to embrace new technology–not mainstream shoppers looking for the least expensive way to get from one place to another. It’s not clear whether or not the Electrovette would have been a 2-seater in production, but if so, its potential audience–already limited by the car’s modest driving range–would have been very small indeed.

As for the battery situation, it’s worth noting that the General Motors EV1 electric car, first seen in 1996, was also powered by lead-acid batteries, and was good for just 55 miles of range on a single charge. The EV1 did enjoy a higher top speed however, and a running change to nickel-metal-hydride (NiMH) batteries for 1999 improved the estimated driving range to just over 100 miles.

At the time that the Electrovette was making the rounds, GM management had boldly predicted that one in ten cars would be EVs by 1995. Of course, that bit of prognostication was based on the erroneous assumption that gas prices would nearly triple in the near future. More interesting to us is the uncertain fate of the turbocharged Chevette seen above. At under 2000 pounds, a 100-horsepower Chevette should have been a hoot to drive. 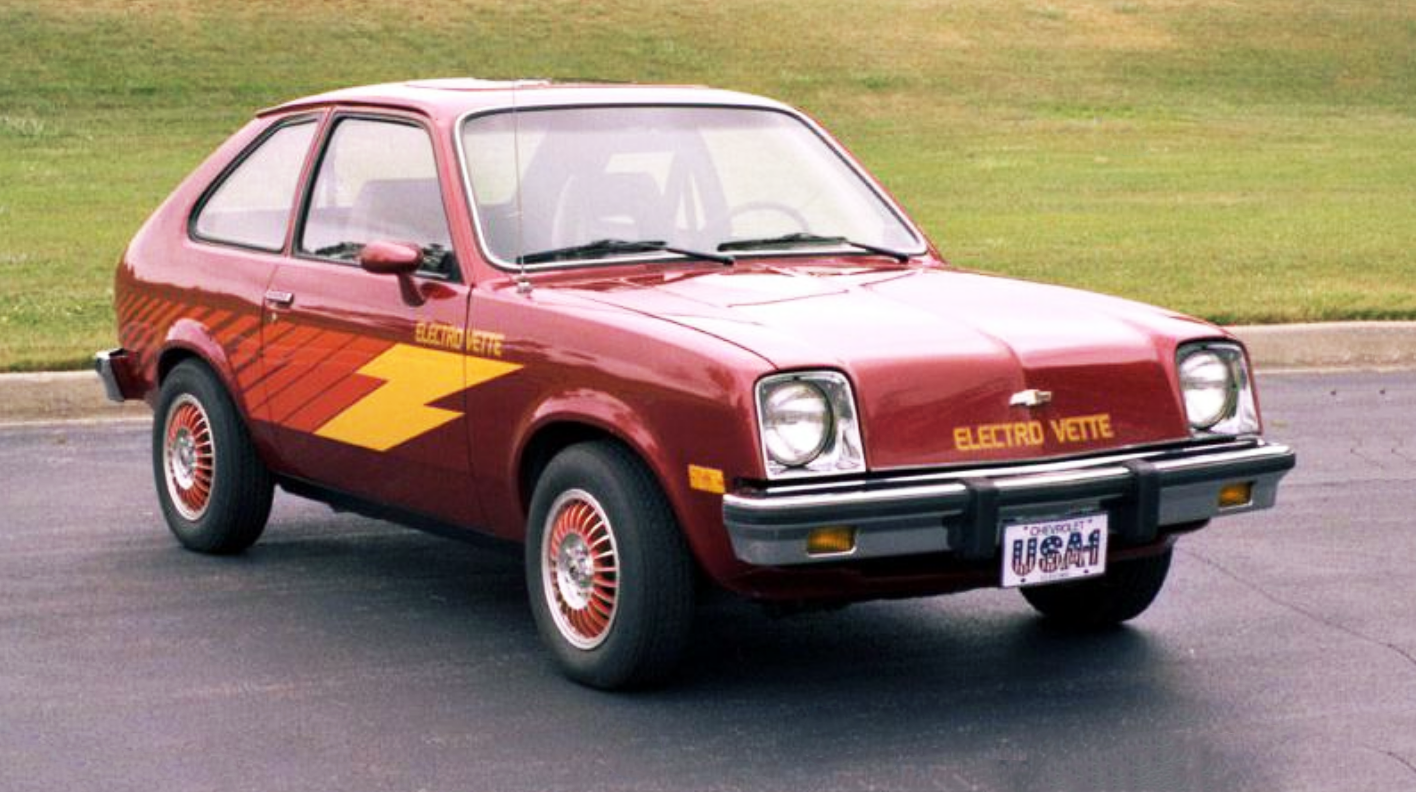