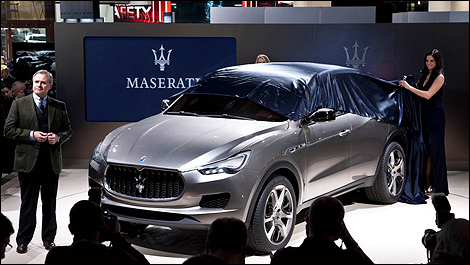 The Kubang Concept, unveiled at the 2011 Frankfurt Auto Show, hints at where Maserati may take the Levante stylistically.

A famed Italian brand issues its first SUV to challenge the likes of Porsche Cayenne and Range Rover Sport. The premium-midsize Levante is a distant cousin of the Jeep Grand Cherokee, but promises to uphold Maserati’s reputation for style, performance, and luxury.

The 2015 Maserati Levante is a new premium-midsize SUV that marks a first for this sporty Italian brand. Maserati is part of Fiat Auto, which took control of Chrysler Group LLC back in 2009 and is also home to Ferrari. The Levante is part of a new-model offensive masterminded by Chrysler-Fiat CEO Sergio Marchionne with hopes of boosting Maserati’s global sales to 50,000 units a year by calendar 2015, nearly 10 times the 2012 level.

The Levante comes hard on the heels of Maserati’s redesigned 2014 Quattroporte premium-large sedan and new 2014 Ghibli premium-midsize sedan. It’s due to start sale by mid-2014 for both the U.S. and Europe following a world premiere at the January 2014 Detroit Auto Show. The name, by the way, references Via Emilia Levante, the street in Bologna where the five Maserati brothers—Carlo, Bindo, Alfieri, Ettore, and Ernesto—established their first business in 1919.

Maserati confirmed its first SUV by unveiling the Kubang concept at the 2011 Frankfurt Auto Show, but was quick to assert that the production version would differ in various respects. Maserati had been thinking about a sports-luxury SUV since at least 2003 (when it showed an initial concept, also called Kubang), but lacked the resources to follow through. Meantime, a raft of rival brands started turning out performance SUVs to create a market class that has grown to include the BMW X6, Jeep Grand Cherokee SRT8, Land Rover Range Rover Sport, Porsche Cayenne, and high-power AMG versions of Mercedes’s ML- and GL-Class.

Now the Levante joins the fray, thanks to the Fiat-Chrysler alliance that gave access to the American partner’s Jeep Grand Cherokee platform and associated hardware. Even so, the Maserati is billed something far more than a Jeep in Italian couture. As Car and Driver noted in late 2011, “While Maserati is upfront about the…Jeep roots, the company also promises that its SUV will be pure Maserati when it comes to engine, transmission, suspension, brakes, and overall feel.”

What To Expect—Design and Engineering

Though the 2015 Maserati Levante is apparently being sourced from Italy, it was originally slated to be built alongside Grand Cherokee at the Jeep Jefferson North plant in Detroit. Such manufacturing kinship suggests the Italian SUV will be dimensionally close to its American cousin, perhaps even down to the location of mounting points for the drivetrain and suspension. Even so, the Levante’s unibody architecture will likely end up bearing little resemblance to the Grand Cherokee’s, thanks to extensive reengineering aimed at providing Maserati levels of handling and refinement without adding weight. Indeed, Britain’s Autocar magazine reports that “as with the Quattroporte and Ghibli [sedans], the Levante is expected to contain a high level of weight-saving aluminum in its body and suspension” versus the all-steel Jeep. And some components could be made of plastic composites or even carbon-fiber. All this is quite appropriate for what will be the new flagship SUV of the Chrysler-Fiat combine.

We’d guess the 2015 Maserati Levante will employ the Grand Cherokee’s basic suspension design—meaning multilink rear geometry and front double A-arms with coil-over shock absorbers—but executed with lighter components and tuned for both sporty handling and a cosseting “grand tourer” ride. Unlike the Jeep, strong off-road ability is not part of the Levante’s brief. Maserati’s “Skyhook” adaptive shock absorbers should be available, if not standard. Unsurprisingly for this class, brakes will be XXL 4-wheel discs (likely Brembo-brand) with ABS and integrated stability/traction control. Steering will probably feature electric assist whose effort can be varied through two or more driver-selectable settings that also alter shock-absorber firmness, throttle response, and shift points for the mandatory automatic transmission. Standard “footwear” will likely involve 19-inch alloy wheels with all-season performance tires, but handling-biased “summer” tires and 20- and 21-inch rims should be available.

Despite its on-road orientation, the 2015 Maserati Levante will be offered with all-wheel drive, perhaps as standard, though we see a rear-drive model as a strong possibility. Sources expect the AWD to differ from Grand Cherokee’s three available types, being a version of Maserati’s own “Q4” system as offered on the Quattroporte and Ghibli. This normally sends all power aft, but can direct up to 50 percent forward in as little as 150 milliseconds via a front-mounted transfer case with an electronically controlled multi-plate clutch. As with most modern AWD systems, electronics determine the optimal power split at any given moment from sensor data on factors like wheel slip, steering and yaw angles, throttle position, vehicle speed, and braking force.

As for styling, the official line is that the 2011 Kubang concept provides only a clue to the “visual character” of the 2015 Maserati Levante. Still, the concept looked so fully developed that it’s hard to see any radical changes being made en route to production. At a minimum, the Levante should retain the show model’s chunky big-wheel stance; curvy body lines; rakishly angled liftgate; high-set head- and taillamp clusters; and Maserati’s signature large, square, vertical-bar grille. Fiat group design chief Lorenzo Ramaciotti dropped a few styling hints for Britain’s CAR magazine, saying “the rear treatment of the Ghibli and the up-kick side feature of the Quattroporte will be significant to the Levante’s design. It’s much more of a crossover than an SUV; it’s not really about going off-road.”

Logic suggests the 2015 Maserati Levante interior will be somewhat like those of its sedan stablemates, with a large center touchscreen surmounting a wide center console, flowing dashboard and door-panel contours, electronic digital-and-analog instrumentation, and plush seats with almost as many adjustments as your smartphone. Maserati hasn’t confirmed seating capacity, but we assume a standard 5-passenger configuration, though a 4-seat package with full-length console and individual rear chairs look a near dead-cert option.

According to Autocar and other sources, the 2015 Maserati Levante will offer the choice of gasoline V6 and V8 engines and a V6 turbodiesel. The last seems iffy for the U.S. market, given Maserati’s reputation for sleek, refined high-speed grand touring cars. Then again, diesels are starting to make sales headway among premium-class utes, so the “oil-burner” could be offered here, though perhaps not at launch time.

The gasoline engines are designed and built by Ferrari and are basically the same units available in the Quattroporte and Ghibli. Our spec chart lists power and torque figures in sedan tune, but one or both engines may be recalibrated for a bit less high-end horsepower and a tad more low-end torque, appropriate for an SUV. In any case, the gas engines comprise a 3.8-liter V8 and a 3.0-liter V6, both with twin turbochargers, direct fuel injection, all-aluminum construction, and variable valve timing. The V8 should produce something like 530 horsepower, the V6 around 410. The turbodiesel is also a 3.0-liter V6, but supplied by Italian diesel specialist VM Motori. On paper, this engine looks like a high-output version of the VM-built 3.0 “Ecodiesel” V6 now available for Grand Cherokee. Autocar pegs at it at 271 horsepower for the Italian SUV, versus 240 for the 2014-model GC. Torque should ring at around 442 pound-feet, as in Maserati sedans, compared to 420 for the Jeep option.

Like Grand Cherokee, the 2015 Maserati Levante will be sold exclusively with an 8-speed automatic transmission designed and built by transmission specialist ZF. This, too, is shared with Maser’s latest sedans, so the Levante will likely inherit their driver-selectable shift programs and standard steering-wheel shift paddles. This basic transmission is also offered in a variety of other Chrysler-built products.

Other features can’t be confirmed yet, but it’s a safe bet that the 2015 Maserati Levante will be equipped to reinforce its semi-exotic brand image and generally to match rivals in the comfort, convenience and connectivity departments. That means a lengthy list of standard amenities such as a navigation system, high-power audio; power liftgate; perhaps a driver-adjustable suspension; and a lush leather-lined interior with genuine wood, aluminum, and/or carbon-fiber accents. Options may be fairly limited, but could still encompass the aforementioned 4-passenger seating, as well as semi-custom trim packages; additional interior cowhide; super-premium audio; and handling-focused wheel, tire, and suspension upgrades. As on Maser sedans, however, driver-assistance systems may be curiously unavailable, so things like lane-departure/lane-keeping and forward-collision warning look doubtful at this point

As noted, the 2015 Maserati Levante has been developed to boost total brand sales in concert with the two new sedans, plus major updates for Maserati’s GranTurismo GT coupe and GranCabrio convertible. (There’s also talk of one or more full-blooded sports cars being added as glamorous low-production showroom lures.) More specifically, CEO Marchionne thinks the Levante will do for Maserati what the Cayenne did for Porsche—namely, attract new customers and big new profits to put the brand on a truly solid financial footing. Given the market’s apparently endless desire for SUVs for all stripes, he’s probably right.

As usual, pricing for the 2015 Maserati Levante won’t be announced until just before sales get under-way. However, an internal Chrysler-Fiat planning document published by Car and Driver suggests the new SUV will cover a spread of roughly $80,000-$150,000, depending on model and equipment. The turbodiesel version is likely to be the price-leader for all markets, U.S. included, if/when it comes here.

If nothing else, the 2015 Maserati Levante should be a zesty newcomer to the familiar field of premium-midsize SUVs. It certainly promises to be different in appearance and driving feel, thanks to its Italian breeding, and it looks to be class-competitive in most all respects, as far as we can tell now. The Levante also offers the snob-appeal bonus of being relatively more exclusive than most rivals; even at the hoped-for $50K units per year, Maserati’s sales volume will remain small potatoes against the likes of BMW, Mercedes, and Cadillac. So welcome aboard, Levante, and buona fortuna.

Read about the 2015 Lamborghini Cabrera here