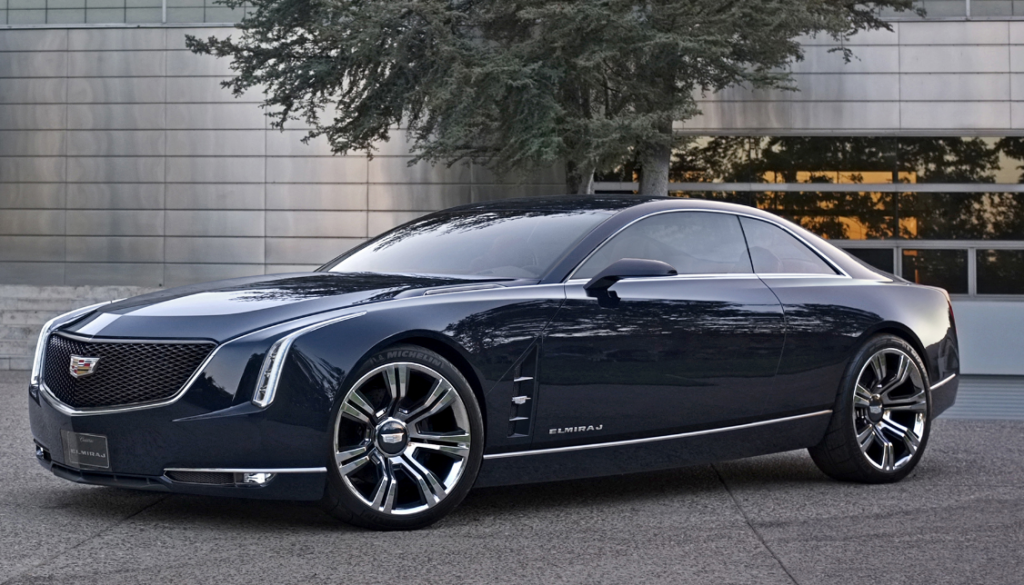 The 2013 Cadillac Elmiraj Concept may hint at what the brand’s coming flagship sedan will look like.

Any luxury brand worth its salt should have a “halo” car. It should either be a performance car that sets new standards for power and handling or a luxury flagship with creature comforts you’d be embarrassed to have in your house. Cadillac has hinted at building a halo car several times in the new century with such concept cars as the Cadillac Sixteen of 2003, the convertible Ciel Concept of 2011, and the Elmiraj Concept introduced at the 2013 Pebble Beach Concours. It’s that last car that gives us hope for the future.

Update: On September 24, Cadillac announced that its coming flagship sedan would be named CT6.

Cadillac has confirmed that a new full-size luxury sedan, tentatively called the LTS, will arrive by the end of 2015. “This is a car that Cadillac needs, that will define its brand in terms of innovation and excellence. That’s the mission,” said GM product chief Mark Reuss in an interview with the industry publication Automotive News. If Cadillac wants to be considered the standard of the world once again, as it was for much of the twentieth century, it will need the LTS to be a success.

Though a coupe, the Elmiraj Concept is easy to visualize as a sedan.

Meant to compete against the likes of the Audi A8, BMW 7-Series, and the granddaddy of them all, the Mercedes-Benz S-Class, the LTS will be the largest and most expensive car in the Cadillac lineup. While the Elmiraj Concept is a 2-door coupe, the LTS will likely be a four-door sedan to meet the needs of the wealthy business executive types that buy luxury sedans in the $70,000-$100,000 price range.

What to Expect – Powertrain and Chassis

The Elmiraj Concept features a twin-turbocharged 4.5-liter V8 that Cadillac estimates at 500 horsepower. No such engine is currently in the GM arsenal, but a high-lux car like the LTS would require a new state-of-the-art V8 engine. GM’s current overhead-valve V8s put out impressive horsepower numbers, but those engines are meant more for performance than refinement, and their large displacement makes them inefficient in the face of tightening fuel economy standards. We suspect Cadillac will develop a dual-overhead-cam V8 — its first since the Northstar V8 that was last offered for the 2010 model year — with all the technologies GM has embraced of late: direct injection, variable valve timing, and perhaps cylinder deactivation. German rivals Audi, BMW, and Mercedes all have similar engines sized between 4.0 and 4.6 liters, so the 4.5 in the Elmiraj may actually be a sign of things to come, and the 500 horsepower figure seems right.

The 4.5 will likely be the upscale engine choice, with the base engine being a version of the twin-turbocharged 3.6-liter V6 found in Caddy’s XTS and CTS VSport. 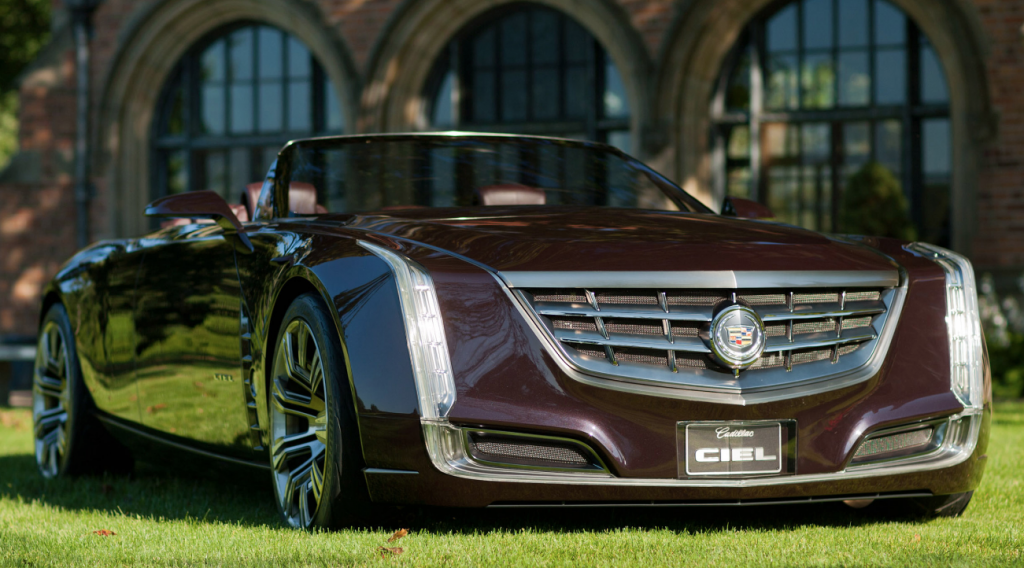 A third or even fourth powertrain could be offered. The Ciel Concept, which was essentially a four-seat convertible version of the Elmiraj, featured a hybrid version of the twin-turbocharged V6. That leads us to believe that one or both engines might get a new hybrid system in the LTS.

GM and Ford Motor Company have announced a partnership to produce a 10-speed automatic transmission. While timing on that transmission has not been announced, the LTS would be a natural choice to showcase such new technology. It would likely work only with the 4.5-liter V8. If the 10-speed isn’t ready in time, look for an 8-speed automatic for rear-drive models and a 6-speed for those with all-wheel drive.

The LTS will be the first vehicle on GM’s new rear-wheel-drive full-size architecture, which is internally known as Omega. It will almost certainly offer GM’s Magnetic Ride Control suspension that reacts to road conditions by applying an electrical charge to a metal-infused fluid in the dampers to help the car carve through corners and float over bumps.

What to Expect – Design

We can only hope that the LTS will look like the Elmiraj, which is absolutely beautiful. However, the Elmiraj has a long greenhouse that would support a four-door design. In fact, the roofline is reminiscent of one of the most exclusive Cadillacs of all time, the 1957 Series 70 Eldorado Brougham, which carried a pricetag of $13,074 at a time when the average car sold for $2749 and the average American pulled in $4230. That car was a hardtop sedan (meaning it lacked center pillars) with rear-hinged rear doors. Cadillac could mimic this look by keeping the Elmiraj’s roofline, adding rear-hinged rear doors, and using blacked out B-pillars, a la the Mercedes-Benz CLS. What a cool nod to the past that would be. Unfortunately, spy photos of the LTS reveal a car with a more traditional roofline.

Named for V16 engine under its hood, the Cadillac Sixteen Concept made the rounds in 2003.

The rest of the LTS design will represent the future of Cadillac’s angular “Art and Science” design language, which incorporates the brand’s signature horizontal-blade head- and taillights. Other design cues that could come from the Elmiraj include a long hood and short deck for a sporty look, and a pointed hood that is reflected in an almost boattail-style rear end. We expect the LTS will look like a combination of the Elmiraj and the CTS. That’s not bad because the CTS is also quite attractive.

What to Expect – Technology

As Cadillac’s flagship, the LTS will bristle with technology. It could mark the debut of Cadillac’s “Super Cruise” suite of autonomous driving technologies. Super Cruise will be able to help a car brake, maintain speed, and stay in its lane, all without driver intervention. A combination of cameras, radar, ultrasonic sensors, and GPS tracking will enable these features. The Mercedes-Benz S-Class already has most of these technologies and to a lesser extent, so does Cadillac. Current versions of these features include radar cruise control, Lane Departure Warning, Side Blind Zone Alert, Rear Cross Traffic Alert, and Forward Collision Alert. The main new element added by Super Cruise will be the lane-keeping feature. It will likely use cameras to read lane lines and activate the electric-assist power steering to follow them. 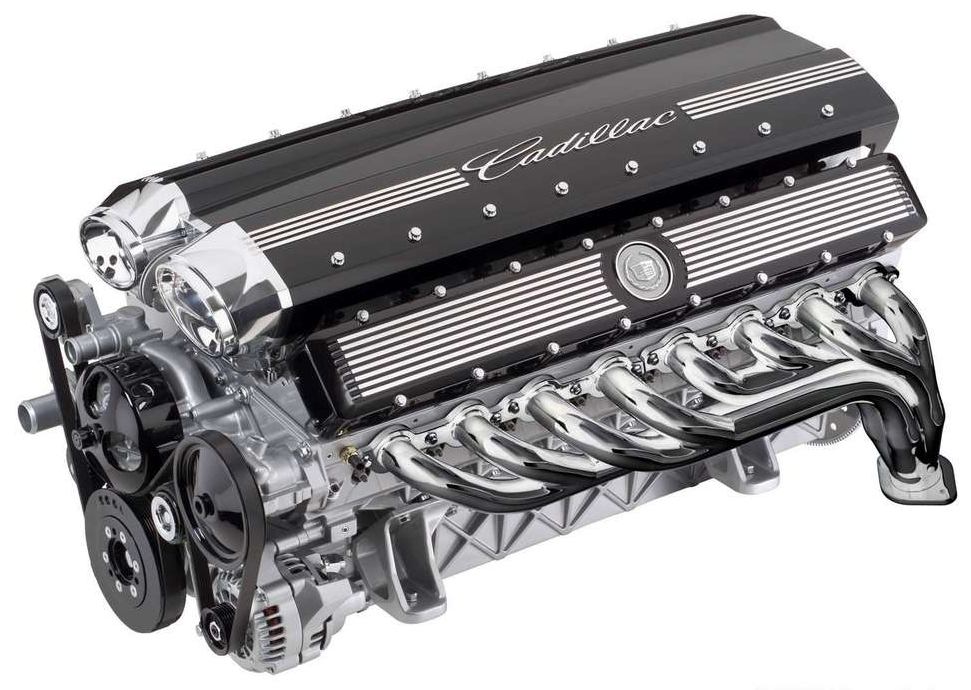 While the LTS won’t boast a V16, like this one shown along with the Sixteen Concept, it will likely be offered with a model-exclusive V8 engine good for around 500 horsepower.

Full-size luxury cars don’t sell very well. The most popular vehicle in the class, the Mercedes S-Class, sold only 13,303 units in 2013. However, the high prices these cars command gives them plenty of room for profit margin. More importantly, they provide a halo for their brands that helps sell lower-end vehicles and raise the profile of a brand overall. Our hope is that the LTS looks much like the Elmiraj and performs as well as its German rivals. That could spur buyers to start thinking of Cadillac as the standard of the world once again.