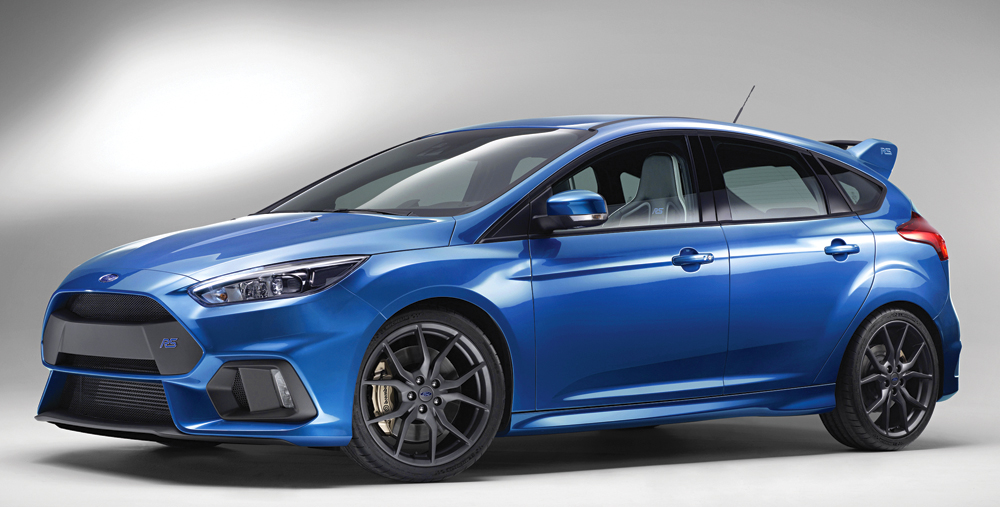 Arguably one of the most anticipated new performance cars of 2016 is a Ford Focus. Yes, a Focus. No, we aren’t forgetting the upcoming Ford GT. But it’s not just any old Focus we’re talking about here—it’s the third-generation Focus RS.

Americans couldn’t buy the tasty European RS models Ford released in 2002 and 2009. We had to be satisfied reading road tests in British “buff books” and watching videos on YouTube. Still, Ford has given us performance Focuses before. Remember the 2002-04 SVT and the still-available ST? They’re better than nothing of course, but this time Ford is bringing the full-strength RS to this side of the pond.

The Focus RS’s engine is Ford’s 2.3-liter EcoBoost four-cylinder. Compared to the unit offered in the Mustang, it’s been modified internally, and has a larger turbocharger compressor, upgraded cooling system, and RS-specific cylinder head supplied by Cosworth. The only transmission is a six-speed manual. Ford says it’s good for 350 horsepower and 350 pound-feet of torque on premium gas. This compares to the Focus ST’s 252 hp and 270 pound-feet of twist. Using the car’s launch-control system, an RS will go 0-to-62 mph in 4.7 seconds. Ford claims top speed is 165 mph.

Big horsepower numbers always open eyes, but the RS’s standard all-wheel-drive system might be this car’s headliner. Competitors like the well-regarded Volkswagen Golf R use Haldex-style AWD. Ford engineers say that setup is fine in a straight line, but doesn’t do much for handling. Instead, Ford used a different system that has an electronically controlled clutch for each rear wheel. These clutches continuously alter front-to-rear and side-to-side distribution of torque based on driving conditions. A maximum of 70 percent of torque can be sent to the rear axle, and the clutches can also act as a sort of limited-slip differential and shift all available power to either rear wheel.

The Focus’s body shell has been stiffened, and other suspension changes include two-mode shock absorbers with a stiffer setting for track driving. Spring rates, bushings, antiroll bars, and the electrically assisted power steering have also been tweaked from Focus ST specifications. Brake upgrades include Brembo-brand front calipers.

Ford lets the driver pick from RS’s “Normal,” “Sport,” “Track,” and “Drift” drive modes. These tweak the calibrations for AWD, shocks, steering, throttle, stability control, and exhaust note. The shock settings can also be controlled independently. Track and Drift modes are not meant for public roads, with the latter modifying torque distribution to the rear axle to create controlled tail-out oversteer.

The RS gets its own front and rear fascias and a larger rear spoiler above the rear window. Interior tweaks center around Recaro seats, RS logos, and blue highlights. While other Focus variants are made in Michigan, Ford only builds the RS in Saarlouis, Germany.

• The Focus RS has 350 ponies from a 2.3-liter turbocharged four. Expectations have changed a lot since the ’86 Escort GT.

• Early media test drives at a Ford track in Europe have resulted in mostly glowing reviews peppered with adjectives like “exceptional” and “brilliant.”Evo magazine asked “the best hot hatch ever?”

• No dual-clutch or automatic transmission available. The racy shell-type Recaro seats optional in Europe aren’t coming to the States.

• Limited palette of four exterior colors, and the signature Nitrous Blue is a $695 option.

The combination of compact-car practicality and track-day hooligan make hot hatchbacks tough to beat as enthusiast-friendly daily drivers. It’s not cheap, but the 2016 Ford Focus RS might be the best hot hatch on the market, and all indications so far are that it’s a very special car.