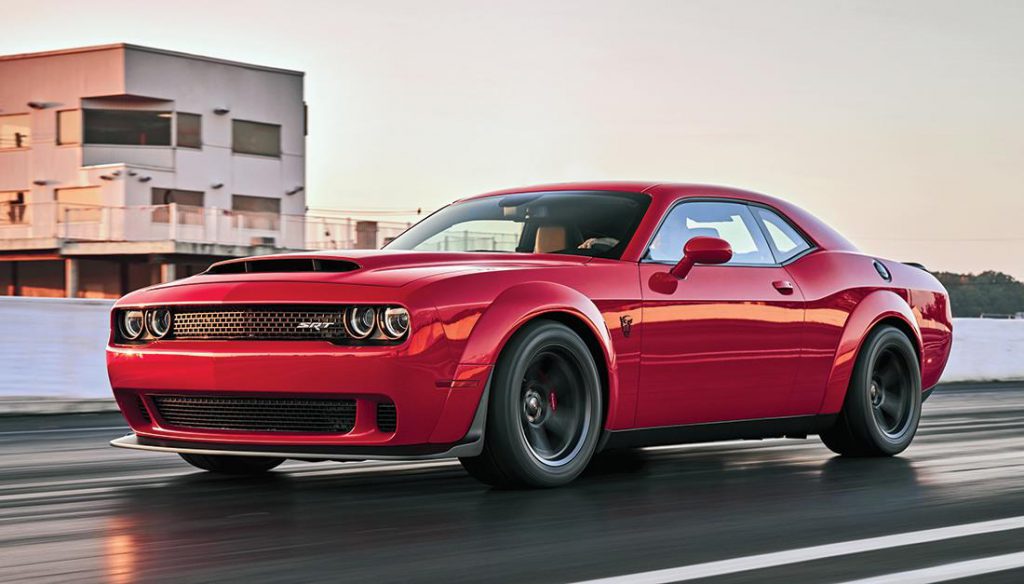 Remember how Dodge’s new-for-2015 Challenger and Charger SRT Hellcats were headline grabbers with their 707-hp supercharged Hemi V-8s? Now that’s yesterday’s news, and the story Dodge is selling for 2018 stars an 840-horsepower Challenger. Let that 840 number soak in as we consider the latest Future Collectibles pick, the 2018 Challenger SRT Demon.

It’s probably best not to bury the 840-horse lead here, so let’s start under the hood. As in the Hellcat, the engine is Dodge’s supercharged 6.2-liter V-8. But in Demon trim, Dodge says the Hemi is 62 percent new. Highlights include a unique block, crankshaft, pistons, and connecting rods, in addition to a larger blower, increased boost pressure, a higher redline, bigger fuel injectors, and even a second fuel pump. The engineers also fitted the “SRT Power Chiller,” basically an intercooler that uses the refrigerant from the car’s air conditioner to cool intake air. Horsepower is rated at 840 on 100-octane unleaded gasoline, or 808 ponies on easily sourced 91-octane premium. Torque peaks at 770 or 717 pound-feet, depending on what’s in the tank.

The transmission is a beefed-up eight-speed TorqueFlite automatic. It comes with “Launch Assist” mode, a “TransBrake,” and something called “Torque Reserve.” We don’t have the space to describe them in detail, but they work together to improve standing-start acceleration. Retuned adaptive shocks and softer springs are said to help with weight transfer and improve traction. There are also upgrades to the driveshaft, rear differential, and half shafts. Tires are specially designed 315/40R18 Nitto drag radials mounted on 11-inch-wide wheels.

Demon’s exterior modifications include the so-called “wide-body” add-on front-and-rear fender flares that increase width by 3.5 inches and make room for the 12.6-inch-wide gumballs. A new Air Grabber hood has what Dodge said was the largest functional hood scoop on any car.

The interior comes standard with a cloth-covered driver’s seat; a rear-seat-delete package includes an access panel decorated with a neat Demon-on-the-drag-strip graphic. Rear and front-passenger seats are optional for $1 apiece.

The optional Demon Crate also costs a buck. Said to be valued at $6140, the crate contents include the hardware needed to make the full complement of horsepower, two narrow front drag wheels (tires not included), a right-side-mirror block-off plate, and a set of Demon-branded track tools.

As you may have deduced, Demon is unapologetically all about the drag strip. Dodge asserted the NHRA-certified time of 9.65 seconds at 140 mph made Demon the world’s fastest production car in the quarter mile. It also noted that, by NHRA production-car rules, Demon was too fast to legally run at NHRA-sanctioned drag strips. The car’s 0-60-mph time, a mind-boggling 2.3 seconds, was claimed to be the world’s quickest for a production car, and its ability to pull a wheelie when leaving the line was declared a production-car first.

Devised as a limited-edition one-year car, the Demon is here and gone. Really gone. . .

With the 2018 Challenger Demon, Dodge has somehow made the Hellcat seem downright pedestrian. While $85,000 Challenger drag cars aren’t for everybody, it’s hard to argue this monster isn’t compelling. The biggest question on Demon’s future may be, “How is Dodge going to top this?”