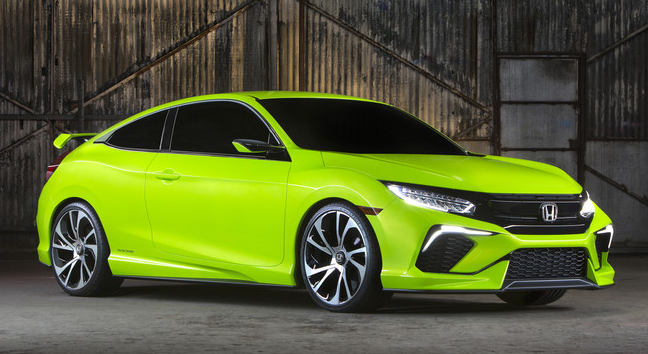 Honda pulled off a quite a surprise at the 2015 New York Auto Show: it unveiled an eye-searing Civic Concept that directly previews the design of the soon-to-arrive next-generation Honda Civic lineup. For the past few years, Honda has traditionally unveiled its redesigned models in slightly altered show-vehicle form prior to revealing the true production versions. This neon-green coupe utilizes the typical show-car tricks—flashy paint, aggressive big-diameter wheels, a lowered stance, and ostentatious fascia treatments—but subtract all that stuff and you’ve got a very good idea of what the 10th-generation Civic will look like.

Honda also provided some intriguing details about that forthcoming new Civic. It will have a longer wheelbase; a lower, wider stance; and the lineup will include sedan, coupe, and new 4-door hatchback body styles. The sporty Si variant will return, but it will be upstaged by the arrival of a Civic Type R model. (International Civic fans have enjoyed Type R performance models for years, but North American buyers have gone without it until now.) 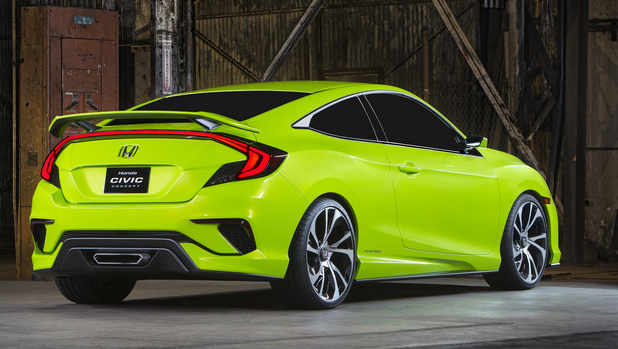 The 10th-generation 2016 Civic sedan models are slated to launch this fall, and will be followed by the coupe and 4-door hatchback models.

The Civic is Honda’s “everyman” compact car, so it’s interesting to see the company make a move toward performance with this next-generation model. We’re happy to see the lineup expand to include a 4-door hatchback model, and delighted to see Honda has finally seen fit to let us Yankees have a Type R. Honda will certainly release more info as the 2016 Civic’s launch date gets closer. At Consumer Guide, we will be starting an office pool on whether or not anything close to the Concept’s retina-grabbing green paint sees production.