In one of the most anticipated reveals of the 2012 Los Angeles Auto Show, Honda pulled the wraps off the 2013 Civic.

We won’t blame you if you think this is a bit strange, considering that Honda redesigned the Civic for the 2012 model year. Though company officials won’t admit it, the changes to the 2013 model are largely in response to some unaccustomed criticism. Most of it centered around the car’s interior materials and noise/vibration/harshness (NVH).

The 2013 Honda Civic will return in coupe and sedan body styles. Coupes get slightly updated front and rear fascias. The Sedan’s changes are a bit more dramatic, with a redesigned front and rear end. The interior layout is largely the same as the 2012, but materials quality sees noticeable improvement. All models will now come with Honda’s i-MID dashboard screen, Bluetooth wireless cell-phone link, and the ability to stream Pandora Internet Radio from a supported smartphone.

Trim levels for the Coupe and Sedan include LX, EX, EX-L, and sporty Si. Exclusive to the Sedan are a gas/electric Hybrid, a version powered by compressed natural gas, and a high-fuel-efficiency conventional model called the HF. The entry-level Civic DX is gone.

Though the drivetrains see no major changes, Honda claims that the suspension and steering see improvements in overall response and feel. A stiffer front subframe, thicker windshield and front-door glass, and additional layers of sound deadening promise to quiet the cabin. The dashboard and front-door panels gain soft-touch panels.

CG Says: Despite taking a step backward for 2012, we found the 2012 Honda Civic to still be a great compact car. The company seems to have taken the criticism to heart. The 2013 update provides some very meaningful improvements to the interior design. Additional sound deadening measures and updated safety systems should only strengthen it. 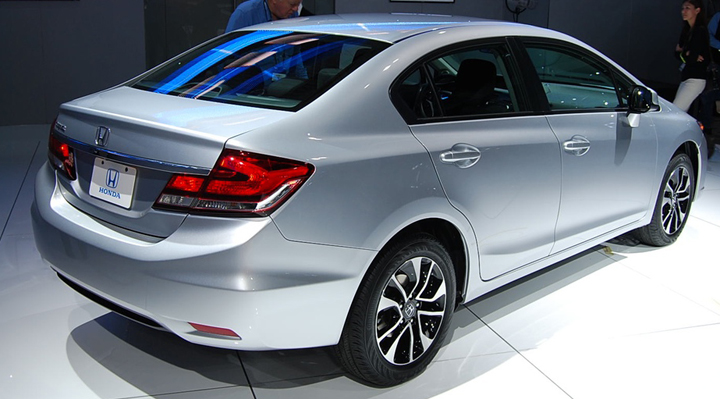