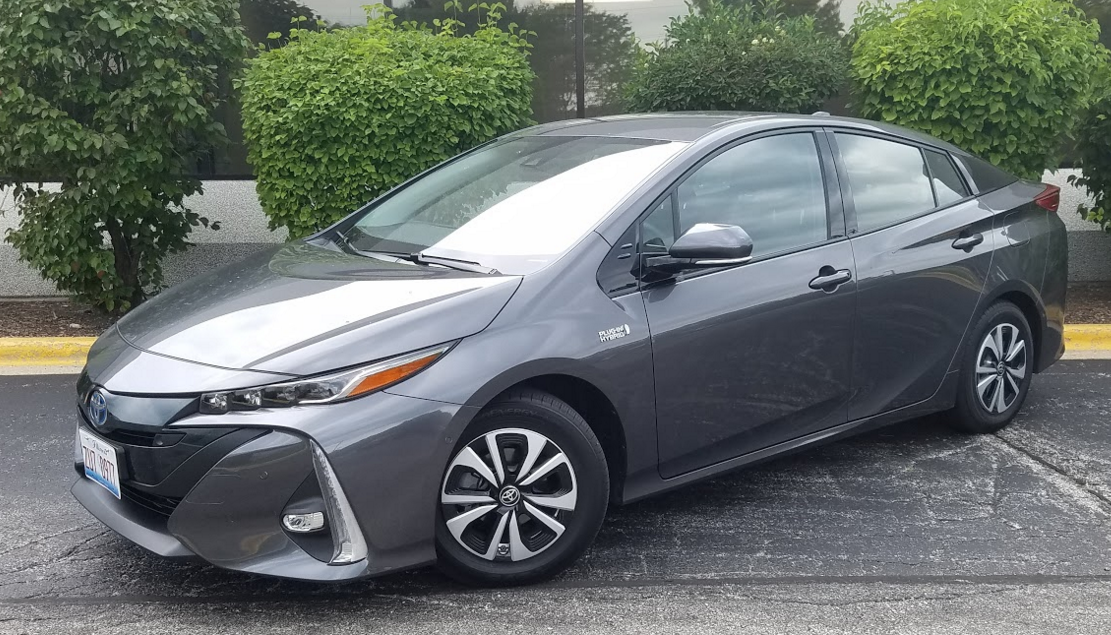 The not so good: Some switches and plugs awkwardly placed, control complexity

After previously testing an entry-level Toyota Prius Prime Plus, we recently took a 600-mile “spin” in the top-line Advanced model. What was the difference?

Well, $6000 to start. What you get for that are a host of safety and convenience features, including fog lights, blind-spot and rear cross-traffic alert, Toyota’s Safety Connect assistance system, SofTex (leather-like) upholstery, power-adjustable driver-seat lumbar support, a head-up display, heated steering wheel, rain-sensing wipers, an 11.6-inch infotainment screen (vs. 7.0 inch), Park Assist (the car can parallel-park itself), and remote climate control (you can set the car to turn on the heat in advance of getting in). So … a lot.

You can easily tell the plug-in Prime version from a “regular” Prius by the former’s “scooped” rear window and unique headlight/taillight arrangements — even if you can’t see its “PRIME” nameplate addition.

As with the Prius Prime Plus, we managed to go about 31 miles on all electric power after a full recharge before the gas engine kicked in to help. In one stint of driving strictly on gas (the tank was filled after the car had switched over to gas power, then filled again after 123 miles), we averaged 59.7 mpg, a rather phenomenal figure. Overall, we took shorter trips (with more city driving) in our Prius Prime Advanced test vehicle than we did with our Prius Prime Plus tester, which enabled us to plug in more often and maximize our all-electric driving. This significantly bumped up our overall fuel economy (88.7 mpg, compared to 55.7 in our Prius Prime Plus). 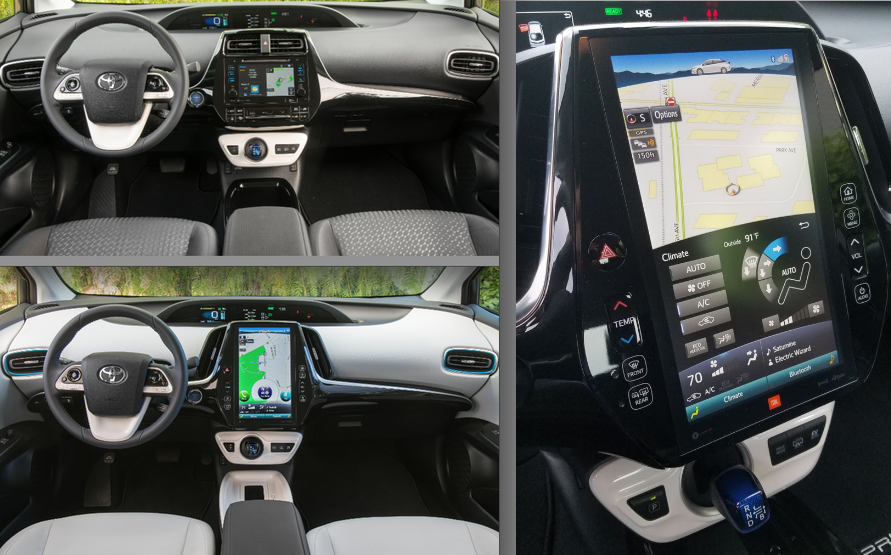 The base-line Prime Plus version has a smaller touchscreen flanked by some buttons (top left), while the Advanced gets a much larger, vertically oriented one that’s virtually buttonless — and a bit more complicated to navigate.

One element added on the Advanced drew some criticism. In place of the base model’s 7-inch touchscreen with some buttons was a vertically oriented 11.6-inch screen with virtually no buttons. Not only did the “buttonless” element add to the complexity of making some adjustments, we found that the screen washed out in some lighting conditions when wearing sunglasses.

But added elements we did like included the head-up display (which projects speed, navigation directions, and other info onto the windshield in front of the driver) and the driver-seat power lumbar adjustment. And had the weather been colder, we likely would have developed a fondness for the heated steering wheel and the remote climate control’s ability to pre-heat the interior before getting in.

The Prime has a larger battery than the regular Prius; this results in a raised cargo floor (reducing cargo-area height more than you might expect) and a bit of a drop down to the folded rear seat backs.

Although the “normal” Prius earns a Best Buy award in the compact-car class, for many folks (especially those who travel less than 30 miles round trip during a normal day), the plug-in Prime might make for an ultra-thrifty alternative. You lose some cargo space and versatility in the plug-in conversion (the Prime’s cargo floor is higher — which cuts available cargo height — and there’s a notable “drop” to the folded rear seat backs), but you gain electric-only driving capability and eligibility for a $4500 federal tax credit (based on the Prime’s 8.8 kilowatt-hour battery) that — if you qualify (and most buyers would) — ends up making any Prime version about $2000 less than its comparable Prius stablemate. But the bottom line is that you really can’t go wrong either way.

Compared to the regular Prius, the Prime trades some cargo space and versatility for its electric-only capability, but it might also end up costing less due to being eligible for a $4500 federal tax credit.