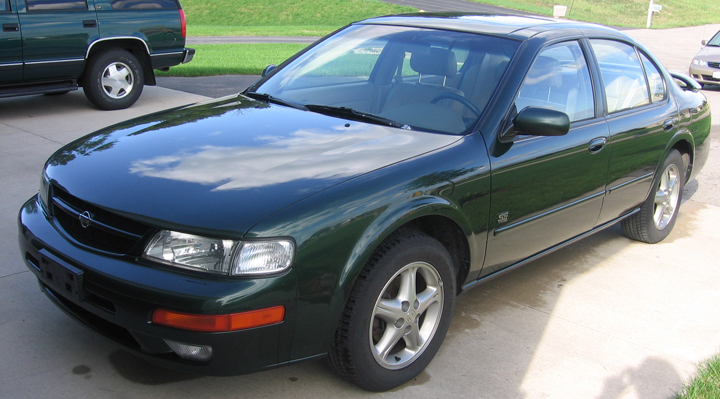 I’ve been thinking about this car a lot lately, and I’m not quite sure why. Normally it’s friends I’ve lost touch with that cause me to drift into moments of nostalgia; this time it’s a Nissan. My Maxima was a ’99, and I bought it to replace my 1995 Integra. I hated having to part with the Acura, but I found it especially difficult to install and remove my then-newborn daughter into and from her car seat in the back of that fabulous but cramped coupe. A four-door was in order.

I bought the Maxima SE used, and it was an odd bird. Good-looking in dark green, the car was oddly equipped with manual transmission, sunroof, and cloth seats, yet, strangely enough, no ABS.

I didn’t do much to the car in terms of customization. The only measures I took to make the car my own included replacing all the speakers with ones that didn’t buzz during Devo songs, slapping on some seriously grippy Z-rated Yokohama tires, and installing a K&N Filtercharger—which I credit for much of the wonderful noise that came from under the hood.

Despite the Maxima being a sedan, I always felt like I was driving a large coupe—something on the order of an early ’70s Monte Carlo, albeit one with a crazy, rev-happy engine and a very slick 5-speed manual transmission.

I sold the car to a friend when I joined the Consumer Guide staff. Because I was usually in test cars, I no longer needed my own ride. I never did entirely remove the fudge stain my daughter had added to the front passenger seat. In retrospect, I see that letting a three-year-old kid eat a Superdawg Super Sundae in a car can be a profoundly reckless act.

My friend has long since traded the Maxima in on a Volvo, so I haven’t seen the car in a while. It was a good car; it averaged 22-ish mpg, was quick enough, and looked good in a quiet, schoolmarmish sort of way.

I am not sure what I would buy (used) today in the same situation. Manual-transmission-equipped midsize sedans that are genuinely fun to drive are no longer common. I could buy a Passat, perhaps, or I could wait around until the new Accord Sport showed up pre-owned some place.

I wonder if my nostalgia now comes from a lack of appreciation during the time of ownership. I didn’t really want the Maxima—I needed it. Likewise, I wasn’t especially broken up when I sold it. The fact that it was actually a great ride, well, that was a bonus.

The Maxima was the only car I ever purchased that I didn’t long for for months, if not years, in advance. My Scirocco and my Integra—those were cars that I loved well before I located the examples I ended up owning.

It’s likely that this missive will serve as sufficient catharsis, and my Maxima recollections will soon fade. Still, I am impressed that it’s possible to miss a vehicle I merely liked, and only came to appreciate after the fact.