Infiniti Reveals the First of the Q Models: the 2014 Q50 Sedan

After much publicity regarding the brand’s change of nomenclature, Infiniti revealed the first model to carry the “Q” designation, the 2014 Q50 sedan, at the 2013 Detroit Auto Show.

As part of a new marketing effort to clarify the arrangement of the model lineup for new markets, the company will be rebadging all of its vehicles with new labels: Q for cars, QX for SUVs and crossovers.

The Q50 premium-midsize sedan will be available with two engine options: a V6 or hybrid powertrain. The V6 is a 3.7-liter unit that produces 328 horsepower. The Hybrid is composed of a 3.5-liter V6 paired with an electric motor and a lithium-ion battery pack for a total of 354 horsepower. Both powerplants are paired with a 7-speed automatic transmission that comes with steering-wheel-mounted paddle shifters.

Speaking of steering, the Q50 has a new available steering system that relies on electric motors to transmit the driver’s inputs to the front wheels. This is accomplished by interpreting the driver’s intentions and independently controlling each wheel to deliver the outcome the driver wants. A mechanical steering system is present, but works only as a backup. We assume it’s installed in case of an electrical power loss. Four different drive modes modify the effort required and steering gear ratio. Both powertrains are offered with rear-wheel or all-wheel drive.

Available on the Q50 is Active Lane Control, a front-facing camera mounted in front of the interior rearview mirror that monitors the car’s position in its lane. As an enhancement to the company’s existing Lane Departure Prevention system, the camera detects if the vehicle is drifting out of its lane due to sudden changing road conditions, such as crosswinds or pavement inconsistencies. Active Lane Control helps the Lane Departure Prevention system by making finer adjustments to the steering angle than the LDP system can do on its own. All in all, this system helps by reducing the effort required by the driver to keep the car in its lane.

Infiniti will also offer an option called iKeys. With this feature, up to four drivers can customize various aspects of the vehicle and match them to their own ignition key. The driving position, climate control, audio, navigation, and phone-control systems can be set and saved using the dual touchscreen.

Interior features include a new dual touchscreen setup. The screens are stacked on the central control panel. The system also contains apps for many vehicle-centric functions. Other apps can be downloaded through USB drives or the user’s smartphone. The most frequently used apps are housed in the upper screen while other apps are displayed in the lower screen. The two screens allow an app to be displayed on one screen while adjustments for that app are made on the other screen. Other functions, such as climate control, are controlled by buttons on the dashboard.

CG Says: Much has been made of Infiniti’s decision to rename all of its vehicles in preparation for entry into new world markets. The current names were seen as alphabetically out of order and confusing, and Infiniti executives think they have simplified them for new customers. However, they just end up confusing the rest of us—for the time being, at least.

With that said, the Q50 sedan seems like a great luxury/sport sedan from a maker known for its great luxury/sports cars, SUVs, and crossovers. The new technology features up the ante in the luxury market, especially the dual touchscreens. While Ray LaHood might have something to say about driver distractions, we really want to see how they work, but only while stopped in a safe place. Check back for our review of the 2014 Infiniti Q50. 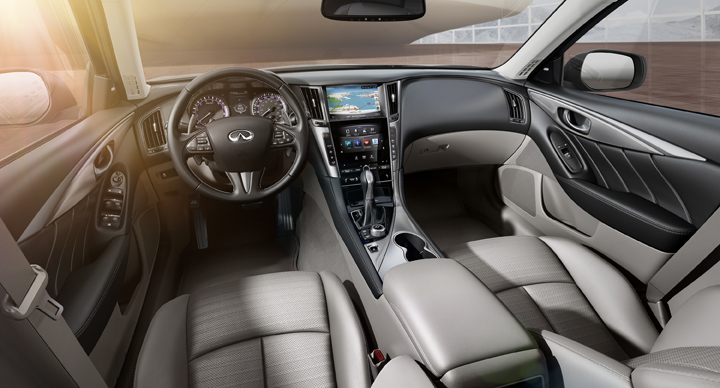 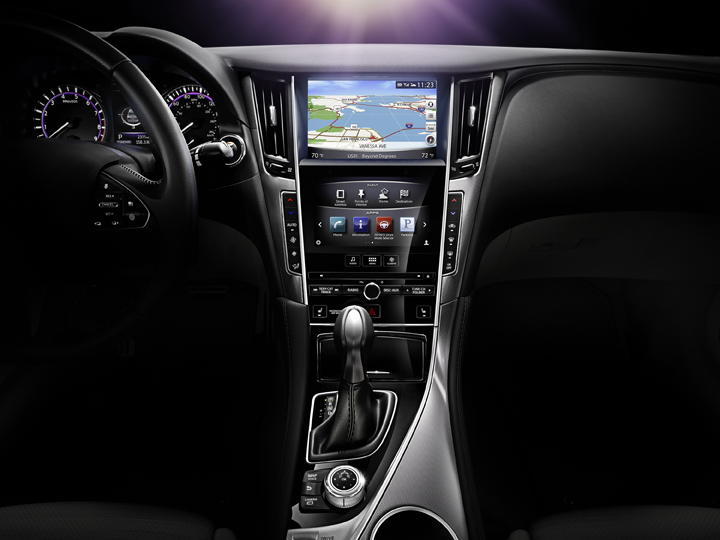