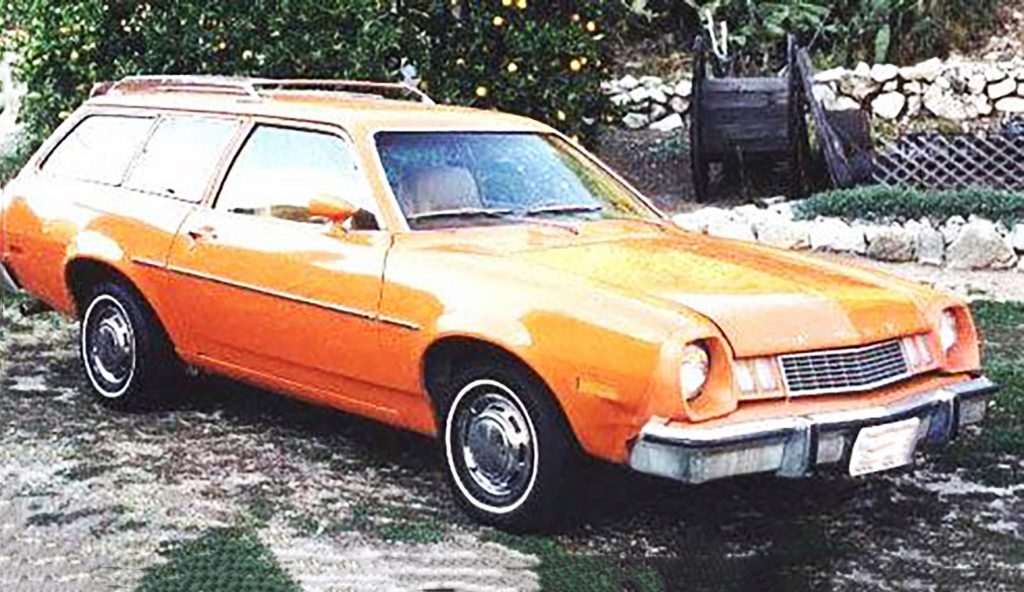 Consumer Guide Publisher Tom Appel learned to drive stick in a 1977 Ford Pinto nearly identical to the one seen here.

I learned to drive a manual transmission in 1982. I was in something of a hurry to do so, as I had just started working at a service station and was not keen to admit to my boss or any of the mechanics there that I could not operate a three-pedal vehicle. It was just assumed that I could, and I meant to meet that expectation.

As the cleanest of the pump jockeys employed by the Plum Grove-Euclid Mobil station (I was especially good about not splashing transmission fluid all over myself), I was frequently called upon to accompany customers home in their own car or truck when they brought said vehicle in for service, then drive it back to the station so the service work could commence. This was a task I much enjoyed.

The day I was tapped to drive a gentleman home in his Seventies Ford Econoline van would prove to be pivotal in my development as a car guy. The van’s owner, a tradesman of some sort, was a nice guy, and we chatted casually as he drove to his home just five minutes from the station. As we talked, I noticed something that sent a chilling shock of fear up my spine. The guy was doing something with the turn signal stalk—wait, that’s not the turn signal… oh s***, this thing is column shift!

I was gripped with horror—how could I tell this guy I can’t drive stick, much less a three-on-the-tree? 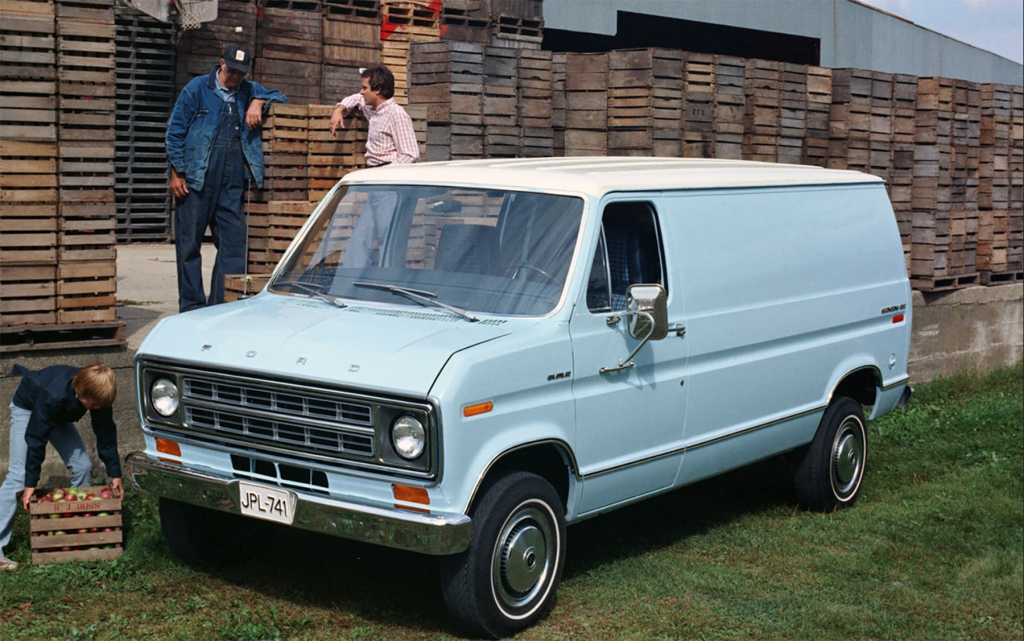 Who knew? The 1975 Ford Econoline could be equipped with a huge 460-cid V8 and 3-speed column-shift transmission.

As I attempted to think rationally through the cloud of panic that had nearly paralyzed me, it hit me—It would not be that strange to admit I couldn’t drive column shift, as those were already pretty rare by the Eighties. I could confess that much.

Here’s the thing: In theory, I KNEW how to drive a manual-transmission vehicle. I had read about it, my dad had explained it to me, I understood it… I just hadn’t actually done it. 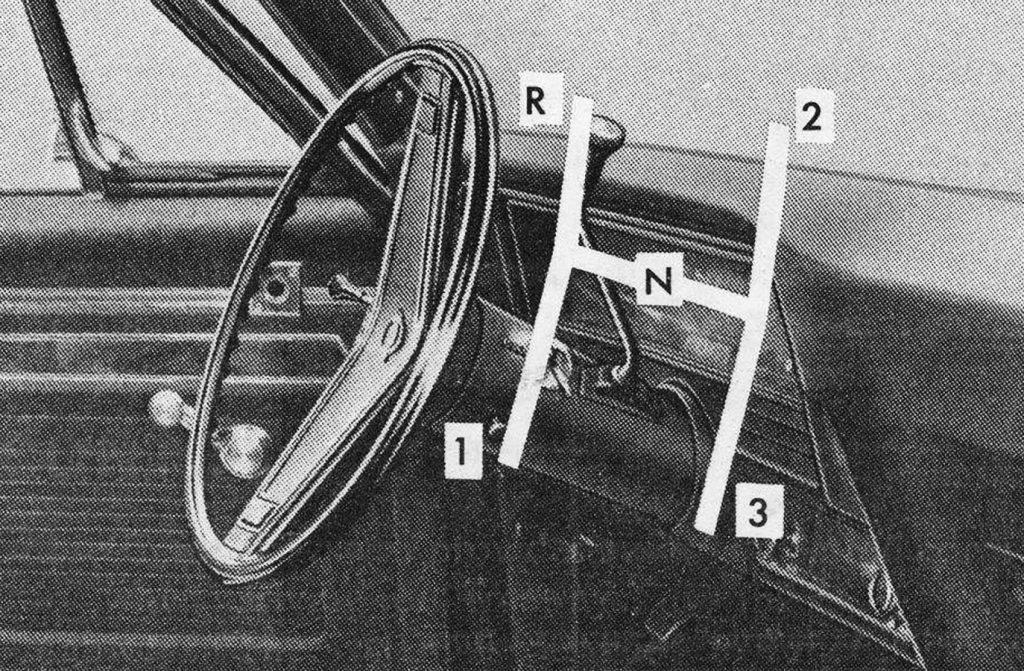 Unfamiliar to most drivers today, the column-shift manual transmission was once ubiquitous. The “3-on-the-tree” arrangement worked exactly the same as any other manual transmission, except that the shifter was located on the steering column instead of on the floor.

So, when we pulled into the van owner’s driveway, I mentioned that I had never driven a column shift before. The owner laughed, told me there was nothing to it, and showed me the shift pattern. Looked easy, but hell—now what?

So, he got out, and I walked around the van and got behind the wheel. I released the parking brake, and to my surprise and delight, the van rolled backward without me having to do anything. Seeing this, the owner walked into his house, obviously convinced that I had the situation in hand.

Funny thing—I did. In part because it was packing a monstrous 460-cubic-inch V8, the van was a cinch to drive. I recall lifting off the clutch in first gear, and the van just idling forward—almost no throttle necessary. Somehow, someway, I was driving this thing, and not screwing it up.

I recall making it back to the station without having to stop, and never getting into third gear. The trip was hardly a clinic in proper manual-transmission operation, but I had pulled off one of the greatest frauds of my career. I did not attempt to back the van into a parking space—something we generally did with vehicles in for service—as that would have been tempting fate. Instead, I parked the van nose in, walked into the station and hung the key on the service board. I said nothing to anyone. What could I say? Anything I’d share about my fantastic accomplishment would betray my secret. So, I celebrated in silence.

Mark was my age, but much more mature than I. An entrepreneur from an early age, Mark earned money selling copies of Playboy and Penthouse magazines to neighbor kids for twice the cover price. He sourced most of his inventory from a dumpster behind a nearby 7-Eleven. I envied his moxie. At some point you’d think Mark’s parents would have wondered why nervous pubescent boys were dropping by the house for short visits at all hours of the day, but I don’t think they ever looked into the matter. 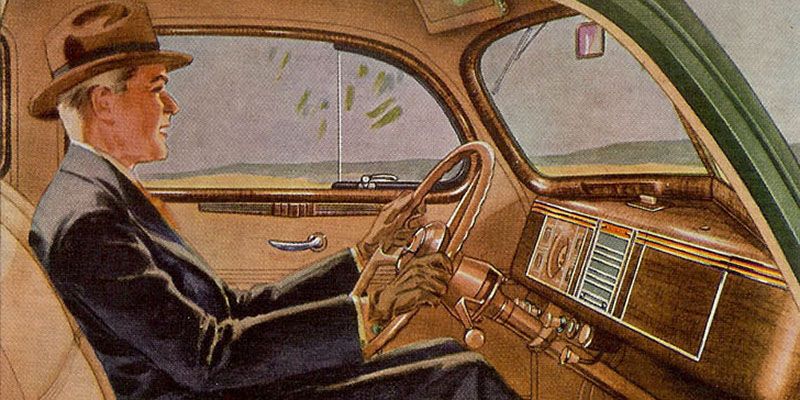 Mark also saved money, a practice I only recently got good at. And, being good with money, Mark became the first of my friends to purchase his own car: a 1977 Ford Pinto Wagon in Orange (Ford color code 8G).

Mark was proud of the Pinto for a couple reasons. First, it was in excellent condition. More importantly, Mark had received numerous pats on the back from adults for having purchased such a sensible car. As I recall, most of my friends gave Mark crap for driving a Pinto, but we were all secretly jealous of him for being the first among us with his own wheels.

What I found most interesting about the Pinto was its transmission—a 4-speed manual. And, after much pleading and badgering, and the promise of a few beers from my dad’s basement refrigerator, Mark agreed to teach me how to shift for myself.

My official lesson happened on a sunny day, though I do not recall the time of year. It was probably late winter, though the streets were clear of any snow. On a road not far from my home, Mark stopped the car and we switched places. After my smashing success with the Ford Econoline, I expected Mark’s Pinto to be easy to drive—I was wrong.

Mark was patient with me at first, but my ability to match throttle input with clutch engagement was subpar. Unlike the van I had driven weeks earlier, the Pinto’s 2.3-liter 4-cylinder was a torqueless wonder, utterly unforgiving of anything but perfect clutch handling. Mark grew anxious as my tutorial wore on. He was certain I was destroying his clutch, and he threatened to call off the lesson if I didn’t quickly get my crap together. Indeed, each time I stalled the engine the car lurched violently to a stop—it actually did feel like I was breaking things. Additionally, the Pinto didn’t start all that easily, leading Mark to complain that I was killing his brand-new battery.

Eventually I got the hang of things, and managed to drive around the neighborhood for the better part of an hour without stalling. I want to say I bought Mark a tank of gas, though I am not certain that I did. I did sneak him a 6-pack of my Dad’s Rhinelander though a basement window, however, which I think covered most of damage—at least the damage to Mark’s nerves. 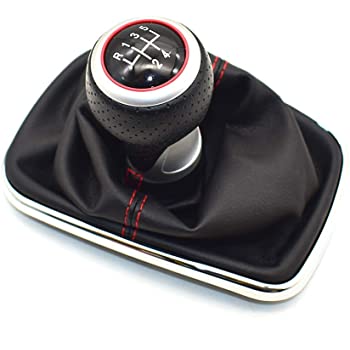 New drivers have little incentive to learn how to operate a manual transmission. In 2019, electric vehicles outsold stick-shift cars in the United States. Within the next year or two, manuals will account for less than one percent of the transmissions in American-market vehicles.

From that day forward, for many years, I drove mostly manual-transmission vehicles. I would go on to own a 1984 Pontiac Sunbird, 1985 Volkswagen Scirocco, 1991 Ford Ranger, 1995 Acura Integra, and 1999 Nissan Maxima SE, all of which were 5-speed manuals. I also spent time with the family Jeep CJ-7, a ’77 model that was unusually equipped with a V8 and 3-speed manual.

Of these, the Ranger was especially interesting as a manual-transmission vehicle, as its big 4.0-liter V6 and smooth Mazda-supplied manual proved the perfect combo for teaching stick to other folks.

Much like the big V8 in the Econoline I drove way back when, the V6 in the Ranger produced plenty of torque at low speed, making it especially forgiving of manual-transmission newbies. Indeed, the Ranger would launch in second gear without throttle, if you lifted off the clutch slowly enough.

It was my wife’s and my intention for our daughter to drive stick, but things didn’t work out that way. She learned how to drive in my wife’s 2011 Jetta TDI Sportwagen with 6-speed manual—a process the kid deeply resented—but her car is an automatic, as we had a hard time finding something she wanted with both AWD and manual transmission.

As it turned out, I never did have to admit to anyone at the station that I couldn’t drive a manual. And I was lucky I acquired the skill early in my tenure at that job. Among the memorable cars and trucks I piloted there—if only for short distances—were the station’s ’85 Dodge D-350 tow truck, a mechanic’s ’79 Pontiac Trans Am, and a Toyota Starlet. I mention the Starlet because it had the nicest clutch and transmission setup of any car I have ever driven—even if it was dog slow.

So, thanks Mark. You were just patient enough, and I’m pretty sure I didn’t do much damage to the Pinto. Plus, my dad never asked about the missing beer.