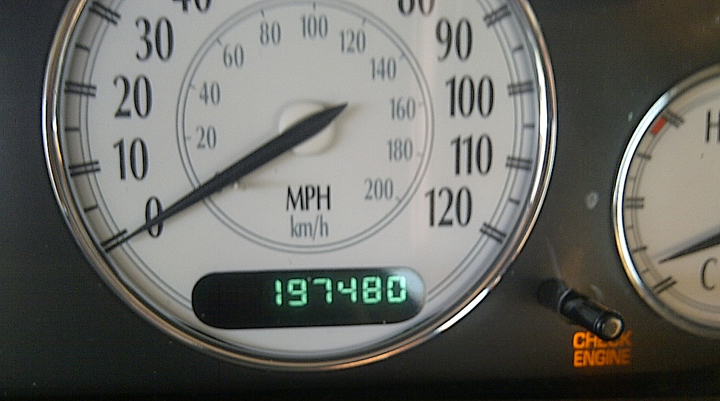 I recently wrote Living on the Edge with My 200,000-Mile 300M, about how the 13-year-old car that I drive to work every day will soon see 200,000 miles on its odometer. I also stated that the fuel-economy numbers that I get are extremely low. But it seems that some readers took issue with this, with claims that I must not have properly maintained my vehicle over the years, and as a result have become plagued with horrible gas mileage. Therefore, I now feel compelled to set the record straight on a few things. So let’s crunch some numbers.

Back in the day, the EPA first rated a new 1999 Chrysler 300M at 18 mpg city/27 mpg highway with a combined mileage of 21. In 2012, 13 years later, the EPA rates the 1999 300M at 16/24 mpg with a combined rating of 19. Factor in individual driving conditions with, let’s say, 90 percent city and about 10 percent highway, and the EPA suggests a 1999 300M will see between 13 and 17 mpg. Those conditions, my friends, are the epitome of my daily commute. Toeing the brake pedal on I-94 during rush hour, day in and day out, partly through Chicago’s Loop vicinity does not make for the greatest of fuel economy.

But wait—have I missed something? I thought my poor fuel economy numbers were a result of the neglect and abuse I’ve shown my car over the past 13 years? And speaking of the past 13 years . . .

Thus, I began to learn how to take care of a car—and an older car at that—when I was 22, solely because I didn’t necessarily need to know how before then. Sure, I learned how to put air in the tires and other small things of that nature. But because I only drove the family car(s) to the store and to friends’ houses, etc., and never on such a consistent basis that I needed to know when it was time to have maintenance done, I didn’t fully come to realize that, in fact, cars are machines, and they must be maintained. Shocker!

I don’t pretend to be an automotive expert, but I feel safe in assuming that not every vehicle runs exactly the same way, even if it is the same kind of car. So if one can get 27 mpg in an old 300M, I applaud you, because you’re getting better mileage than what the EPA currently estimates. But for those of us who have to drive further than our local grocery store every day, our mileage might not be as stellar. Is my 300M beat up a little bit? Of course it is, but what older family car isn’t? There are four kids in my family, so we’ve definitely put our cars through their due paces—and then some.

But now that I am the main person who drives the car, I adhere to the maintenance schedule, because if I don’t the car really will burst into flames. Just ask my mechanic. We see him so often that my family gave him a Christmas present this past year. So while I continue to learn about vehicle maintenance as I go, I’ll be more prepared for when I embark on a new-car hunt and have the sole responsibility of taking care of whatever it is that I buy. I’ll try not to run that one into the ground, though. Maybe I can even get it to see 400,000 miles. That would make a much better story, don’t you think?