Neigh What? The 1899 Horsey Horseless Carriage 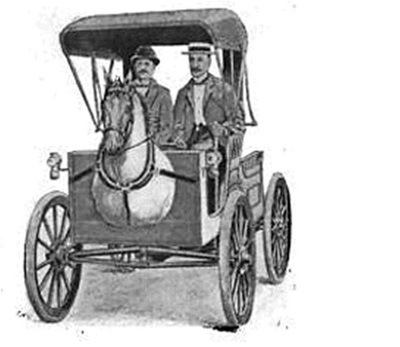 Recently, while thumbing through a 1919 issue of Motor Travel: A Magazine for Automobile Owners, I stumbled upon an article titled “The Motor Car Back in ’99.” This story profiled an automobile that was made to look like a horse, mostly as a calming effect for real horses that shared the road. The article explained:

“Under the head of ‘New Inventions’ is a note about the ‘Horsey Horseless Carriage,’ which tells about Uriah Smith, of Battle Creek, Mich., and his method of preventing runaways on the part of horses who meet motor vehicles. The device included the life size image of a horse down to the shoulders, which was to be fastened in front of the carriage. This he warranted would allay the fears of any equine, ‘for the carriage would have all the appearance of a horse-drawn vehicle; the live horse would be thinking of another horse, and before he could discover his error and see that he had been fooled, the strange carriage would have passed, and would then be too late to grow frantic and fractious.’ The inventor also recommends his device as a wind brake and as a receptacle for gasoline.”

To this day, no one seems to know if the Horsey Horseless Carriage was ever built. However, Time included the vehicle among its 50 worst-ever cars, and this illustration—of unknown origin—has been floating around the Internet. 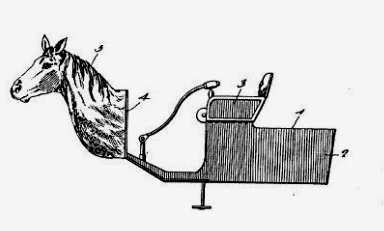 It’s interesting to note that the alleged inventor was Uriah Smith, a well-known historical figure with a fertile mind. A Seventh-day Adventist, Smith was a prolific author and illustrator as well as an inventor, earning a patent for an artificial leg with a moveable ankle.

Smith was obviously a smart guy, but I don’t know about this invention. If I were the horse in the next lane, the sight of this eviscerated equine would freak me out and send me trotting for the high hills.