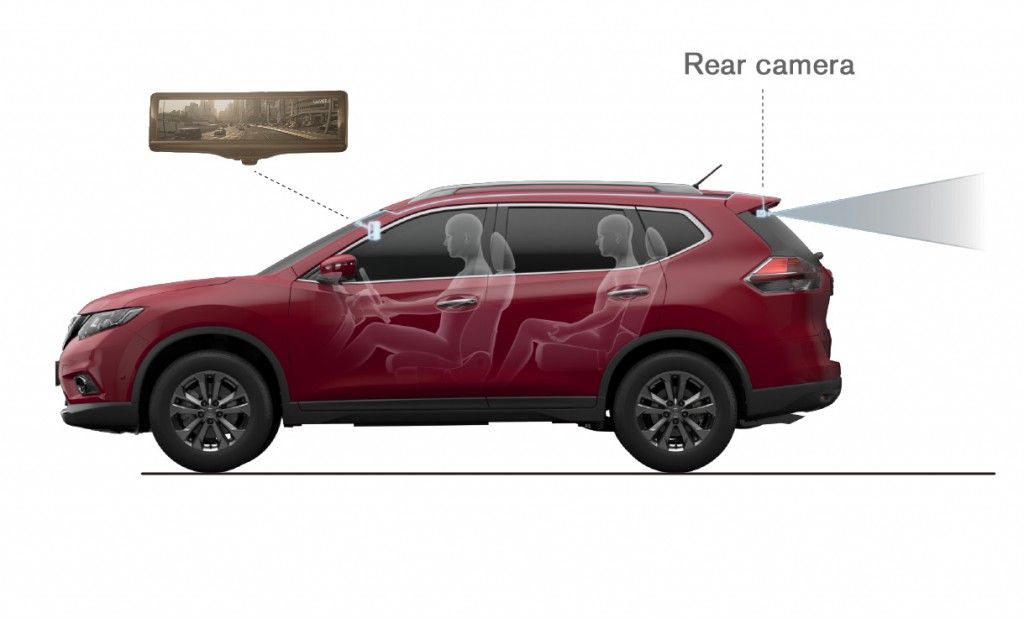 Nissan’s Smart Rear View Mirror is shown here in a 2014 Rogue which may or may not be available with the technology in the U.S. Nissan will announce specific model availability at a later date.

Over the past few years, rearview cameras have exploded in popularity. That’s nothing but good in my opinion, as I consider them to be among the most useful of today’s new automotive technologies. Some rearview cameras are better than others, but an upcoming one from Nissan really breaks new ground.

Actually, Nissan’s innovative Smart Rear View Mirror isn’t a traditional rearview camera at all. Instead – as the name implies – it’s intended to improve upon the traditional inside rearview mirror. And it does.

Unlike a rearview camera, which turns on only when the car is in reverse, the Smart Rear View Mirror can be turned on while the car is being driven. Not only does it give a wider view aft than can be seen through a traditional rearview mirror, that view isn’t obscured by headrests, people in the back seat, camping equipment in the cargo area, or ice on the rear window.

A driver’s-eye view of Nissan’s Smart Rear View Mirror using it as a traditional mirror (sorry about the camera; amateur photographer at work). Note the tree in the center and the width of view through the rear window.

At least in its initial iteration, the Smart Rear View Mirror works entirely independent of any existing rearview camera. It uses its own camera mounted high on the rear of the vehicle – providing essentially the same line of sight as the rearview mirror – along with a rearview mirror itself that doubles as a video screen. Thus the driver can choose to use it as a traditional mirror, but after experiencing a demonstration, I can’t really see why anyone would want to.

Nissan builds a van for Chevy

With a regular rearview camera, the squarish dashboard screen really doesn’t provide the “canvas” that would work best with the picture. It would be far more useful if it were much wider, and it really doesn’t need to be tall; the ideal view would be more panoramic in nature. In other words, it would work much better if the screen were in the shape of, say, the inside rearview mirror.

Some vehicles currently have the rearview camera screen incorporated into the rearview mirror, but it takes up just one corner and is about the size and shape of the one on the back of your digital camera. That’s pretty small to be able to see much.

But the screen of Nissan’s Smart Rear View Mirror takes up the whole surface of the mirror, and in fact, is a bit larger than most traditional rearview mirrors.

Although the Smart Rear View Mirror was demonstrated in a Nissan Rogue compact SUV, the company isn’t saying what models it will be offered in – or exactly when. But we expect it will show up at least by the fall of next year, hopefully sooner. For this is another new automotive technology that really is a revelation.

Nissan Rolls out the all-new 2015 Murano