Almost 23,000 New Yorker sedans were sold in 1950, making it the model’s most popular configuration.

Note: This article is reprinted from the December 2014 issue of Collectible Automobile

A big boost to Chrysler’s image was in the offing in 1950, an infusion of performance that would result from the arrival of the ohv “hemi” V-8 in 1951. Up to that point, though, Chrysler had carved out a good reputation for solid quality and riding comfort.

Underhood in those pre-V-8 days were proven L-head inline engines, a 250.6-cid six in Royals and Windsors and a 325.5-cube eight in the Saratoga, New Yorker, wood-trimmed Town & Country, and the Imperials. Features like “Hydra-Lizer” double-acting shock absorbers, “Cyclebonded” brake linings, and “Prestomatic Fluid Drive” transmission made Chryslers safe and comfortable to drive. If styling was less adventurous than that of some competitors’ cars, company president K. T. Keller was more than happy to hang his hat on the generous head room and chair-height seats in Chrysler interiors.

Though the Windsor was the breakaway overall sales leader for Chrysler in 1950, the New Yorker headed the eight-cylinder group, most of which was on a 131.5-inch-wheelbase chassis. The series was comprised of a club coupe, a convertible, a Newport two-door hardtop that was making its debut, and the $2758 sedan that accounted for 22,633 of the 29,335 New Yorkers made for the year. 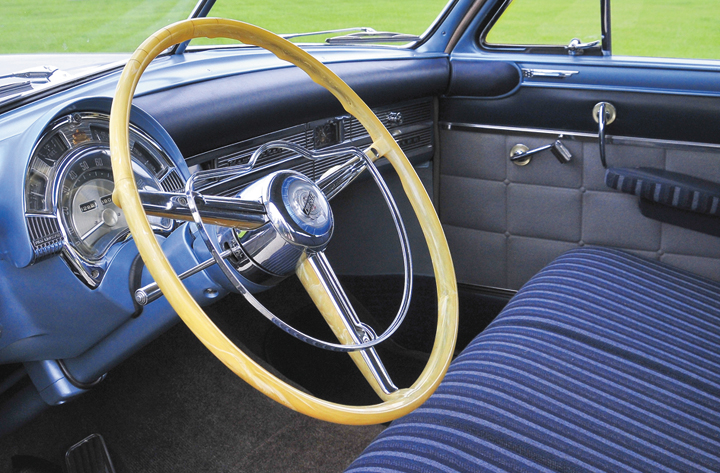 To the right of the instrument cluster is a padded dash top. Chrysler was an early advocate of the feature.

Core bodies and chassis were the same as in 1949, when Chrysler ushered in its first completely new cars since the end of World War II. There were plenty of new touches to distinguish the ’50s, however, starting with a simpler—but still bold—grille. Squared-off rear fenders imparted a sense of greater length, and newly incorporated the taillights. The rear-window was enlarged, too. 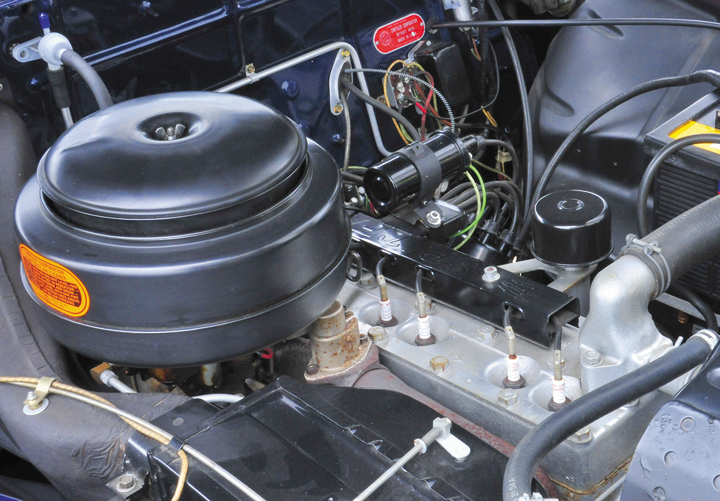 It may not have entirely been the engine’s fault. Prestomatic functioned like a four-speed semiautomatic transmission, but its selling points were smoothness and convenience, not snappy shifts. Only with some finessing of the gearbox between its high and low ranges was MT able to crack 20 seconds from 0 to 60 mph; a best quarter-mile took 22.3 seconds. Recorded fuel economy was 11.34 mpg in heavy traffic, but improved to the mid teens at steadier speeds.

Woron reported that he found the New Yorker maneuverable for its size, with “positive stopping” from the vacuum-boosted brakes. 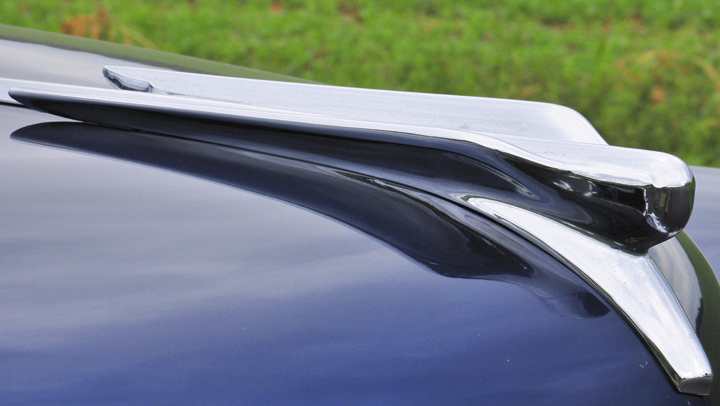 New Yorkers were shod with the same hood ornament as lesser Chrysler models. Imperial ornaments incorporated an open ring into the design.

The Newport Blue 1950 New Yorker four-door sedan featured here has enjoyed long stretches of consistent ownership. According to current owner Robert Huelsman of Chickasaw, Ohio, the car was initially purchased at a Cumberland, Maryland, dealership in autumn 1950. The estate of the original owner sold it to a dealer in York, Pennsylvania, in spring 2002, where it remained until Huelsman bought the Chrysler that October. When he got the car to Chickasaw, Huelsman had it restored by the staff of the automotive service center he owns.