Prius v and Scion xD: The Best and Worst from Toyota

Toyota, like most of my relatives, has a way of making me very happy and seriously ticking me off.

On the happy side, I just spent a week in the hyper-appealing Toyota Prius v. This new, bigger Prius is the kind of vehicle I wish everyone looking for a family car would test drive. It offers room for 5, tons of cargo space, an airy cabin, decent power, and 40+ mpg real-world fuel economy. Better still, with power everything and a navigation system, you’re still under $28,000. If the v had an interior that looked a little less like a Jiffy Lube waiting room, and were it available with all-wheel drive, I would be very close to calling the car perfect.

On the ticking-me-off side is the lingering Scion xD, a vehicle for which there is exactly no market. None. The xD is an old-school small car that manages to be almost exactly antithetical to the Scion brand; it’s expensive for the class and not especially fun to look at or drive. It’s also pretty darn thirsty compared to the recent wave of small cars bouncing off the 40-mpg mark. A quick comparison with the perky Chevy Sonic will make my point. While a Sonic LT hatchback with the connectivity package and optional turbocharged engine costs about $300 more than the xD ($16,470 to $16,095), the Sonic is chock full of stuff the Scion doesn’t have. The Sonic’s most notable bonus features are a 6-speed manual transmission versus a 5-speed, alloy wheels, a hill-holder clutch, and 28 extra horsepower. Also, more subjectively, the Sonic’s cabin is much nicer than the xD’s. But here’s the death blow: Where the Sonic is EPA rated at 29/40 mpg, the xD musters just 27/33.

Sure, the Toyota lineup is huge, and it would be impossible for the company to keep every car current all the time, and I get that. And to be honest, the xD isn’t a bad car. It’s just a car that the market has caught up with—and pretty much passed.

Forget the xD; it really doesn’t matter. It’s the Prius v that people need to know about. I challenge anyone to name a better family car that comes in under $30,000. So congrats, Toyota, for reminding me of my family. You make me very happy, and you make me very sad. In this case, though, the happy thing is much more important than the sad thing. 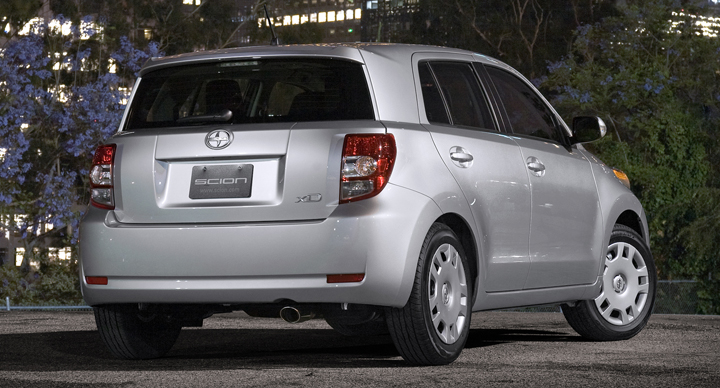