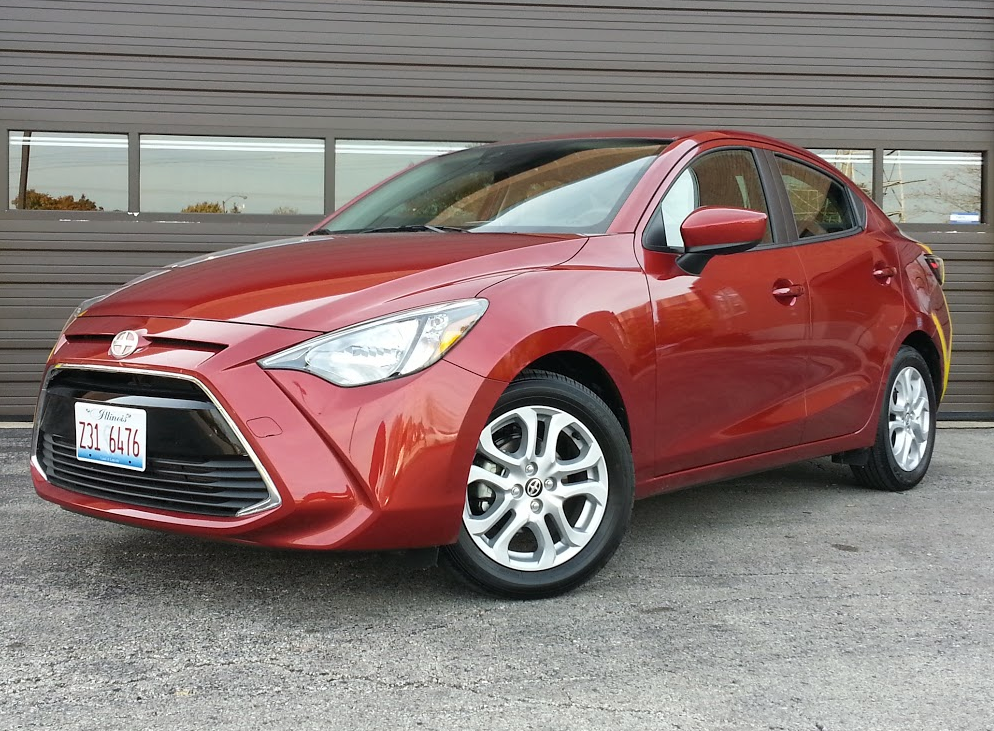 The not so good: Rear-seat and cargo space 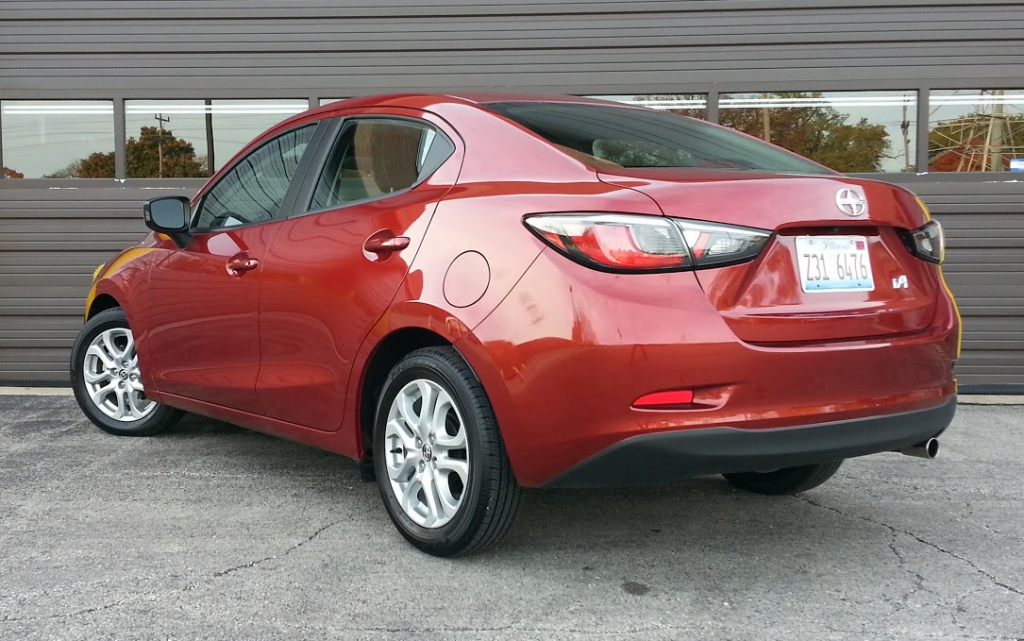 The iA is sold “as is,” with the only choices left to shoppers being paint color and choice of transmission.

This driver wouldn’t be the first Consumer Guide® test pilot to point out that in the all-new Scion iA what you see is what you get. Let’s just see what you get in this subcompact 4-door sedan:

That’s not a bad haul for a car that, like CG’s automatic-equipped test vehicle, starts at $16,800. Indeed, what you see and get in Scion’s first-ever 4-door sedan is based on the fact that the car comes in a single trim level with only the choice of transmission left up to the buyer (the automatic adds $1100 to the tab). 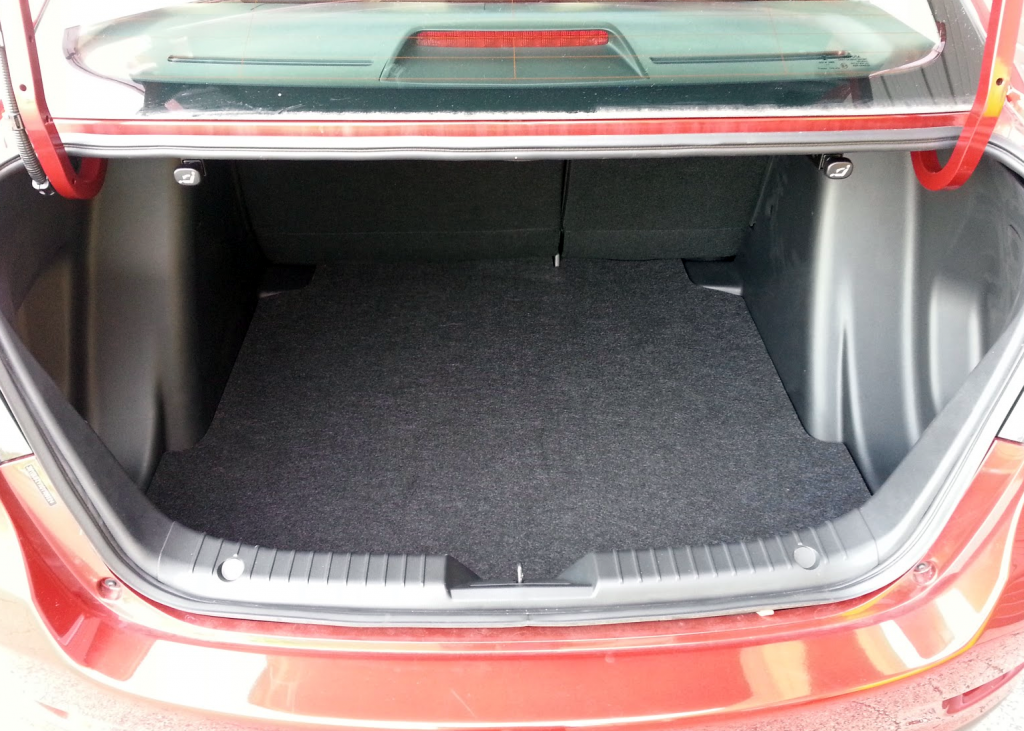 The iA’s trunk isn’t especially large, and 2nd-row seatbacks don’t fold flush with the floor–reminders that the iA isn’t a hatchback.

Of course, determining if the iA is right for you also requires consideration of what you don’t see or get. Aside from the lack of factory options (though there are some dealer-installed appearance and convenience accessories), the Scion sedan is short on padded or soft interior surfaces. The product of a joint venture with Mazda (the iA is essentially a restyled, rebadged version of the latest-generation Mazda 2, which is not sold in the U.S.) the iA’s instrument panel is a dead ringer for the one in the Mazda CX-3 subcompact crossover. Thus, hard plastic abounds, except for a vinyl-covered padded strip through the middle of the dash. On the doors there’s some thin padding on the arm rests and a patch of cloth on the sides.

Neither is cabin storage overly abundant. There’s a modest glove box, a large console bin (in which the digital-device ports reside), two open cup holders in the console, and a small bin at the rear of the console for the benefit of rear-seat passengers. Front doors have small map pockets with bottle holders, but there are no such provisions in back. There’s no console cubby—a center arm rest is among the available accessories—and no arm rest or cup holders in back. A single pouch on the back of the front-passenger seat is provided.

Cargo loading faces shortcomings, too. The trunk space itself is actually pretty good for a tiny car—and the iA is a rarity in the subcompact class as a notchback sedan. However, there’s a tall lip that threatens to make removing heavy objects a bit of a chore, and while the rear seats fold in a 60/40 split, they settle a good 5 inches above the trunk floor, so long items will have to be “finessed” into an iA.

Living with the iA isn’t particularly difficult. While the cloth seats aren’t especially lush, they do offer decent comfort and support. Drivers should be able to work the up-down/forward-back seat and tilt steering wheel to hit a good spot. Leg room is tight in back—no surprise for a car this size—but not impossibly so, though head room is dearer in back than it is in front. Another obvious pickup from Mazda is the console-mounted Commander Control dial. This is the only way into the audio system and a few other functions. It’s never been one of this driver’s favorite features of recent Mazdas, and putting it in a Scion doesn’t make it any easier to operate. At least the climate system, with its three rotary knobs, is simple to use. A large central speedometer is flanked by little “wings” with ancillary gauges (including a smallish tachometer to the left). Direct sunlight makes them impossible to read. 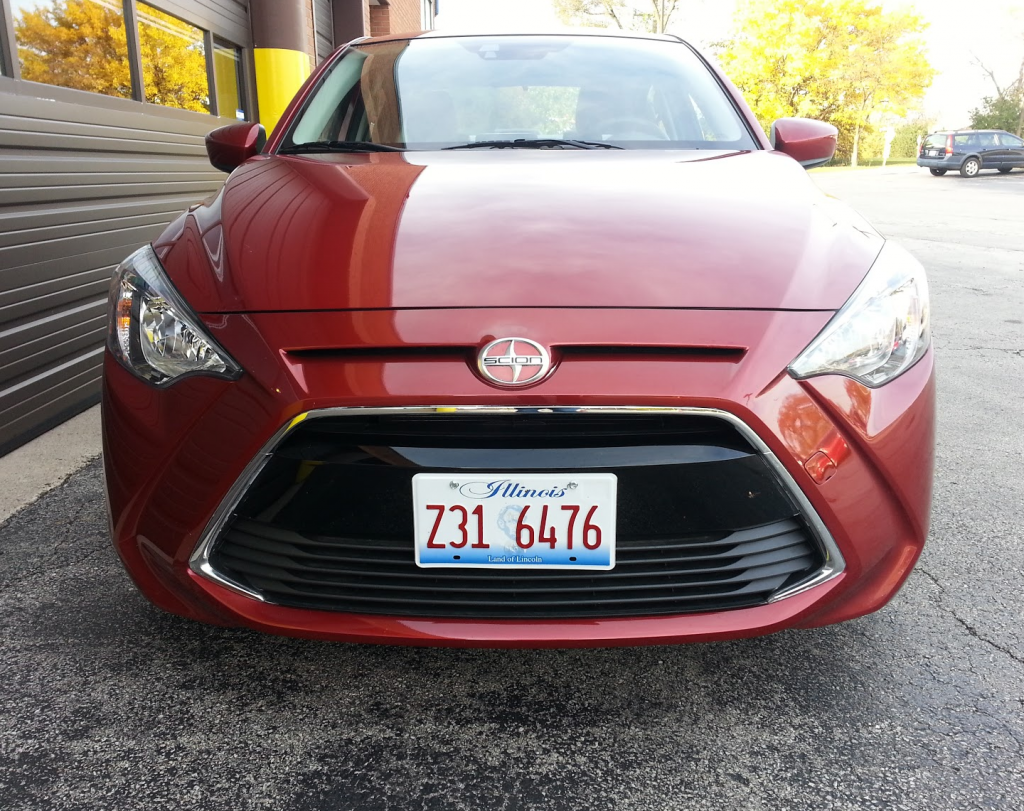 There’s nothing subtle about the iA’s large front-end logo or giant grille.

It may turn a little loud in the process of accelerating, but the iA will get expressway commuters off the ramp and into the traffic flow in safety, while permitting acceptable jump for passing. (For what it’s worth, there is a “Sport” mode setting for the automatic transmission.) This driver averaged a likable 36.7 mpg from his 108-mile turn in the car, 74 percent of that in city-type driving. The EPA rates the iA with automatic at 33 mpg in the city, 42 mpg on the highway, and 37 mpg combined. The car’s diminutive footprint makes it pretty maneuverable in confined spaces. Ride suffers a bit on substantial road imperfections that not only jolts the cabin but sets off some rattles, too. However, there are no tiresome vibrations in steady-state cruising where the pavement is in better shape.

You won’t get the state of the automaker’s art in the Scion iA—and really, could you expect to for less than $18,000 delivered? However, for features and economy of operation the iA makes a good first impression.

The Appel family needs to add a car to the household fleet sometime next year, and the iA is a leading candidate to fill that position. The iA scores big for dollar value and standard safety features, but I’m just as enamored with its on-road behavior. Though hardly fast, the iA is fun to drive, boasting tight steering, controlled handling, and surprising pep from a stop. My only serious hurdle to purchasing one is convincing my teenage daughter that the car isn’t ugly. Doesn’t matter that much, she’s not paying for it. 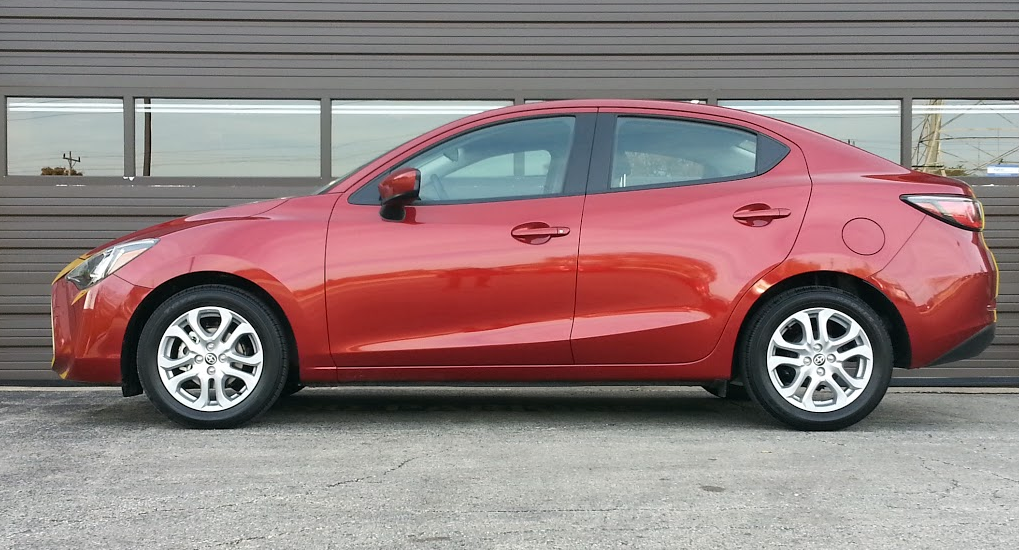 To the trained eye, a profile view of the iA makes its Mazda origins clear.