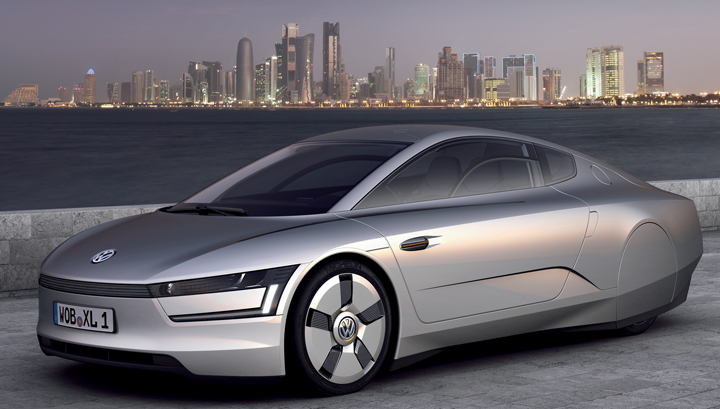 A new round of spy photos confirms that Volkswagen’s radical XL1 plug-in hybrid coupe is on track for its promised debut sometime in 2013. VW had announced that timing in unveiling a concept preview at the January 2011 Qatar Motor Show. Test prototypes, since spied in various global venues—including wintertime Arctic locales and most recently in Europe—appear virtually unchanged from the low-slung 2-seat concept with its semi-teardrop shape and dramatic beetle-wing doors.

The XL1 culminates a long-term VW effort to build a super-frugal “1-liter” car, a program instigated in the early 2000s by Volkswagen Group Chairman Ferdinand Piech. The “1-liter” tag refers to going 100 kilometers on just one liter of fuel—a sensational 261 mpg. Though that figure has yet to be verified for the production XL1, it seems plausible, as this is a small, light car whose design has been mpg-optimized via a good deal of unique high-tech engineering, materials, and components.

But that specialized nature implies limited availability and a rather steep price. Though VW Group CEO Martin Winterkorn initially said that XL1 will be a regular retail model, not just a publicity exercise, other executives have hinted that only 100 might be built, though it’s unclear whether they meant 100 total or 100 per year. A lot depends on where production takes place, and that’s yet to be decided, as far as we know. Pricing is anyone’s guess at this point, but we’d be surprised if the XL1 delivers for less than $50,000, and $60K isn’t out of the question if few are built. However, Winterkorn also promised that the XL1 would be introduced to Europe and later sold in both the U.S. and China, so we’d guess actual production will be far higher than those company execs suggested.

As for the car itself, the XL1 will have a rear-mounted diesel/electric powertrain that drives the rear wheels through a 7-speed VW DSG automated-manual transmission. The engine is a pint-size 0.8-liter 2-cylinder turbodiesel rated at 47 horsepower and 89 pound-feet of torque. The electric motor makes 27 horsepower and 74 pound-feet from a plug-in lithium-ion battery array that can also be recharged by braking and coasting, in the now-familiar hybrid way. Because this is a parallel hybrid drive, the XL1 can deploy either or both of its power sources as conditions demand. VW claims a full-charge electric-only range of about 22 miles. Curb weight is feathery for a hybrid at around 1,750 pounds. With that and a low 0.186 drag coefficient, the XL is claimed to do 0-62 mph in 11.9 seconds, not bad for the modest power on tap. Top speed is governed to just 98 mph, doubtless to preserve battery charge. VW also claims a total driving range of some 340 miles. That’s on par with the larger, heavier, 4-passenger Chevrolet Volt, which uses a 4-cylinder gas/electric range-extender powertrain.

Because it’s designed partly for congested urban conditions, the XL1 is quite small, riding a petite 87.6-inch wheelbase and measuring 153.1 inches long, seven inches shorter than Honda’s 2-seat CR-Z gas/electric hybrid coupe. The interior features a modern but simple dashboard and a passenger seat placed slightly aft of the driver’s. Door mirrors were eliminated on the concept to reduce air drag, replaced by small door-mounted TV cameras that display on dashboard screens. The latest spyshots suggest this feature will carry over to the production model. So, too, will flush exterior door handles and fixed side glass with small opening sub-panes for paying tolls or retrieving your order at the drive-thru. By contrast, there’s no rear window at all, a penalty of the sloping roof and the powertrain directly beneath it. The concept also sported rear-wheel “spats” or covers, again to minimize air drag. We think these will carry over as well, even though most prototypes have been spied testing without them.

The production XL1 will undoubtedly retain the concept’s lightweight construction in which plastics and carbon-fiber account for 76.8 percent of total curb weight. Iron and steel make up the rest, 405 pounds worth. The drivetrain is claimed to weigh just 500 pounds, battery presumably not included.

In all, the Volkswagen XL1 looks to be another of those blue-sky projects that’s part image-polisher and part real-world technology test-bed. But it also seems a usefully practical and pleasant kind of eco-car in its own right, judging by the reviews of British journalists who got brief drives in the concept at Qatar. The XL1 may not be the shape of everyone’s motoring future, but we can’t imagine anyone not loving 261 mpg. 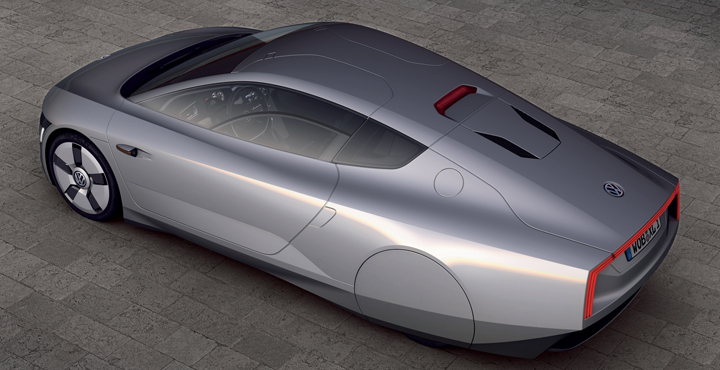 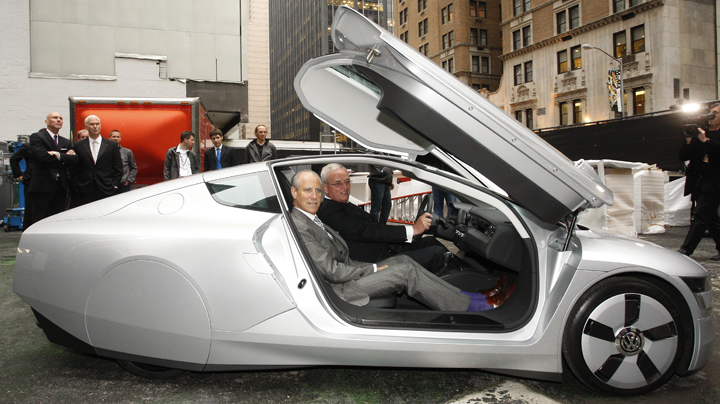