Transforming the Chevrolet Impala from a midsize to a large car on a new platform for the 2014 model year brought with it the opportunity (if not the need) to completely alter the exterior styling of the brand’s flagship 4-door sedan. Toward that end, designers integrated updates of current Chevy appearance cues with a few gentle nods to the nameplate’s long history.

A deliberately “retro” car was never the plan, however, according to John Cafaro, director of North American passenger-car exterior design at General Motors. The charge to the styling staff was to appreciate the Impala’s historical significance to Chevrolet while designing a modern sedan, Cafaro said.

Frontal styling is still dominated by the twin-port grille theme that has established the Chevy look in recent years. In a departure from recent practice, though, the ’14 Impala’s upper grille opening extends fully from headlight to headlight. It’s also larger than the lower opening, a reverse of the proportions found on other Chevys that use the twin-vent concept. Thick horizontal bars within the grille cavities take the place of finer meshlike textures.

The almost featureless hood, bodysides, and decklid of the outgoing Impala are replaced by panels with much more sculpting and detailing. The hood has sides defined by creases that align with the inner edges of the windshield pillars. Bodyside surfaces flare out gently around the wheels, calling them into more prominence. The top of the decklid shows shallow light-catching scallops that start where the roof touches down. Trailing motorists will see a thick chrome bar across the decklid above a wide indentation for the license plate. Taillights employ the dual-lens theme found on other modern Chevys, extending into the decklid—an expensive but necessary touch, according to Cafaro.

Intentionally or not, designers did employ a few touches that could be interpreted as echoes of the Impala’s 55-year history. An undercut character line runs in an arc from the middle of the rear door to the taillight, which, to some eyes, suggests the flanks of the original 1958 Impala, the ’65 (Cafaro’s personal favorite), or the ’67 model. The six-window roofline includes the reverse-angle notch in the rear pillar that came in with the 1994 Impala SS and has been used on the front-wheel-drive Impalas built since 2000. The horizontal hood surface includes two slightly depressed sections reminiscent of the ’61. The Impala name is spelled out on both front doors in individual chrome letters, in keeping with some recent Chevrolet cars and trucks, but a tactic first used in 1959 and again from 1963 to 1966.

Do all new cars look alike?

Shoppers perusing their dealer’s inventory of Impalas will notice some obvious external differences between the trim levels. Exclusive to the top-line LTZ are bright-edged bars in the upper and lower grilles, a bright strip on the lower bodyside, bright highlights on the mirrors and door handles, high-intensity-discharge headlights and LED daytime running lamps, bright-finish alloy wheels, and chrome-outlined dual exhaust outlets through bumper. LTs have painted alloy wheels, gray bars in the lower grille, body-color mirrors and door handles, projector-beam headlights, and hidden exhaust outlets. The solely 4-cylinder LS will have steel wheels with wheel covers and an all-gray grille. 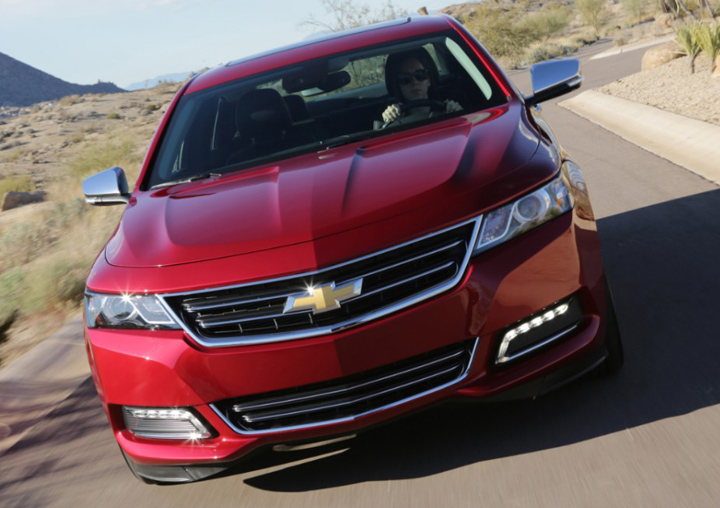