Subaru Launches Its First Hybrid and a High-Performance Concept

Subaru is using the 2013 New York Auto Show to show off two vehicles that represent what officials call the “two sides of the brand.” One side is geared toward environment friendliness, the other toward high performance.

On the former front, observe the 2014 Subaru XV Crosstrek Hybrid. The conventional XV Crosstrek launched for the 2013 model year. Essentially a Subaru Impreza Wagon with a raised suspension, the vehicle is similar in concept, but obviously smaller than, the company’s Outback station wagon.

The Hybrid looks almost identical to its all-gas-powered sibling. It shares the gas model’s lofty 8.7 inches of ground clearance and standard all-wheel drive. It has less than one cubic foot less passenger room and only about 1.5 cubic feet less cargo space. Both vehicles will use a 2.0-liter horizontally opposed “Boxer” 4-cylinder engine and a continuously variable transmission (CVT).

Take these aspects out of the equation, and the Hybrid is actually quite different from the standard model. Engineers reworked the chassis to accommodate the hybrid system’s extra weight. As for that system, a 13.5-kilowatt nickel-metal hydride battery powers a 13-horsepower electric motor. This is smaller than other battery/electric systems. As such, this vehicle will run solely on electric power only in very specific circumstances.

The 2014 Subaru XV Crosstrek Hybrid is scheduled to go on sale in the fourth quarter of 2013.

In giving a nod to its performance side, Subaru unveiled the WRX CONCEPT, which officials say offers a glimpse into what the next-generation Impreza WRX might look like. The car is basically built on the same chassis as the current WRX. That means a turbocharged 2.5-liter 4-cylinder engine and a manual transmission.

The emphasis here is on the styling. The grille is larger, designed to accentuate the car’s functional hood scoop. A hood bulge is meant to provide clearance for the turbo engine. Larger lower valances draw more air into the engine bay to help with cooling.

Subaru offered no hint as to a production timeline, but we have to believe a new WRX is not far away. The current model has been around quite a while. We will speculate that a near- if not full-production model will make its debut in the next auto-show season, likely in Los Angeles this November.

CG Says: Subaru remains red-hot in the automotive marketplace. The XV Crosstrek Hybrid will only enhance its credentials among the green-minded, outdoorsy folks who make up the core of the brand’s customer base. As we mentioned above, the WRX is in need of an update, and this concept is a step in the right direction. Hopefully, a production model will build upon the aggressive foundation you see here. 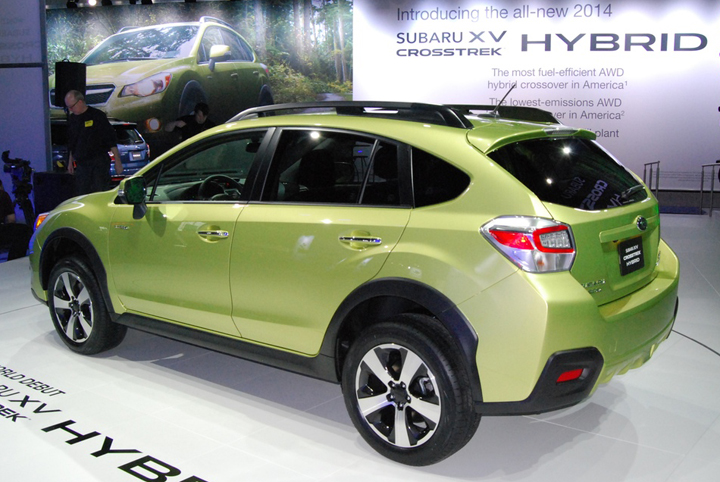