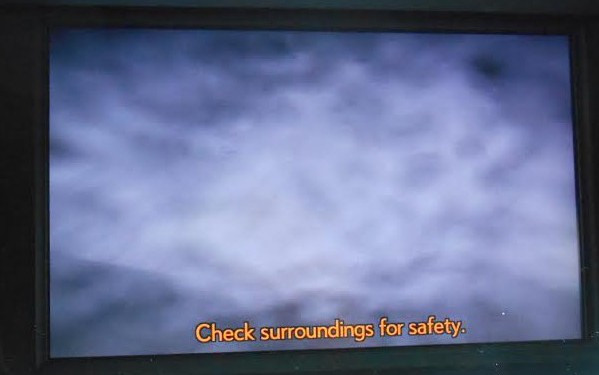 If kicked-up snow covers your rearview-camera’s lens, you can end up with this rather artsy image rather than an image of what you’re trying to avoid. It might be nice if the lens had a heater that kicked on when the rear-window defroster was activated.

When the Chicagoland area was hit by several days of snow that accumulated to well over a foot, I was glad to have use of an all-wheel-drive vehicle – particularly since I was going to take a long trip. And the fact that all-wheel-drive vehicle was a Lexus RX 350 made it all the more enjoyable. Still, it seemed like time to work up a list of winter driving tips.

It didn’t take long to determine that all-wheel drive made a huge difference as the white stuff piled up. Anyone who argues that “front drive is enough” in this kind of weather wasn’t in my vehicle as I easily pulled away from stops that had cars in front of me slowly weaving their way down the street—if they were able to move at all. 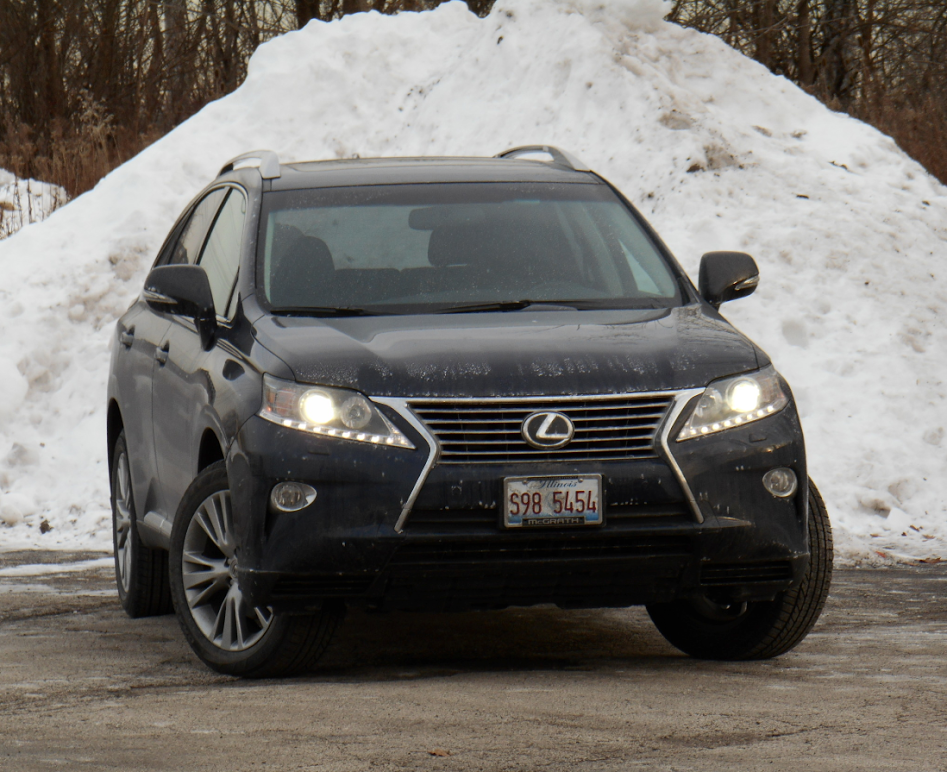 Our Lexus RX 350 with all-wheel drive arrived just after one snowstorm (when this photo was taken) and just before a much bigger one. It made for very secure and satisfying transport when winter was at its worst.

In automatic mode, the RX’s all-wheel-drive system sends power to whatever wheels have the best traction, and when I applied way more throttle than was necessary (I had to test the system, after all), I could feel the power being delivered to different wheels as the tires would break loose. But despite all the sliding going on at the points of road contact, the vehicle itself went more or less straight. As with some other all-wheel-drive vehicles, the RX has a button that allows you to lock all four wheels together (“4WD Lock”). This might be an aid if you get stuck, but in heavy-throttle sprints from a stop, it just prompted all four wheels to break loose at once, which didn’t do much for directional stability.

This morning, as I was backing out of my garage into the snow-filled alley, I saw my neighbor trying to get her front-drive car unstuck. A little sand (I keep some with me in a gallon milk jug) and a little push got her going, but I had no such problems with all-wheel drive.

When the snow gets that deep, people who park at the curb have to shovel their cars out. In Chicago, at least, it’s common practice to then “save the space” by placing a folding chair or other object there. (I saw a photo on line where one creative soul “parked” their kid’s Cozy Coupe in the spot.) I’m not a big fan of that practice, but since I usually have the car in my garage, I typically don’t shovel the space in front of my house right away. Yet if I have an all-wheel-drive vehicle, it effectively “reserves” that space for me, as most people couldn’t get their car in there. How nice it was to make a quick stop at the house and have a spot waiting for me right in front.

There are a host of features now offered that are really appreciated in winter driving. A rear-window defroster is commonly standard on most vehicles, and some (such as the RX 350) will heat the outside mirrors at the same time; way better than having to chip off the accumulated ice with a scraper. Heated seats are a luxury I’ve come to enjoy, and some vehicles (such as the RX 350) also offer a heated steering wheel. Some are also available with heated wiper blades (which would have come in handy during one snowy drive) and heated washer jets. In addition, remote start allows the car to warm up before you get in, which is particularly useful if you remembered to activate all the various heaters (seats, mirrors, etc.) before you turned off the car. (Note, however, that it’s illegal in some areas to leave the car running unattended.) And I never really appreciated keyless access and starting until I realized how nice it was to not have to remove your gloves and dig through your pockets for the keys when it’s really frigid out. (With the key left in your pocket or purse, the doors automatically unlock when you get close, and the engine is started with the push of a button.) 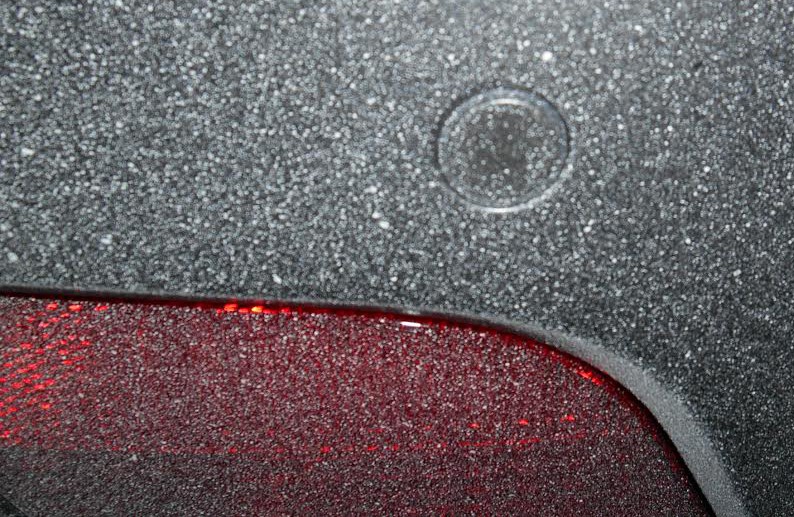 If your vehicle is equipped with obstacle detection, the sensors are usually located behind little circles such as this one in the bumpers. The warning only works at low speeds, but if heavy snow is blowing around, it can fool the sensors into thinking your car is in danger — and sound a warning alarm. Which can be a bit alarming when there’s nothing there.

Many of today’s vehicles are fitted with all sorts of useful technology, and the RX 350 is one of them. But I found not all those features always work as intended when winter rears its ugly head.

Two features I otherwise applaud got a bit crossed up in the heavy snowstorm. One was the obstacle detection. When an “obstacle” is close to the vehicle, a warning chime sounds and a display pops up on the dashboard screen that shows what corner of the car is in danger. However, if blowing snow covers a sensor – as it did this week — it goes off even when nothing is close. Fortunately, the system is only active at very low speeds, so it wasn’t an annoyance, but perhaps this is one reason some cars have a separate button on the dash that allows you to simply turn off the sensors.

When driving at higher speeds, a vacuum is created behind the car that tends to make any snow (or dirt) swirl up and coat the back end. If you have a rearview camera, it can also coat the lens. And that’s what happened to the RX; I went to back into a parking spot, and the dashboard screen just showed white. Note that this is in no way a condemnation of either obstacle detection or rearview cameras—as I’m a big fan of both—but it did demonstrate some limitations.

The first four-wheel-drive vehicle I ever owned was an aged 1981 AMC SX4, a compact-size hatchback with elevated ride height and permanent all-wheel drive. Even on nearly bald tires, that car was a virtual mountain goat in the snow. Since then I’ve owned several Jeep Wranglers and pickup trucks with 4-wheel drive, and I can’t imagine myself ever being without one – at least, not up here in the snow belt. So whenever I hear folks in these parts make the claim that all-wheel-drive is a waste of money, I can only think that they’ve never had the pleasure of driving one when winter was at its worst.