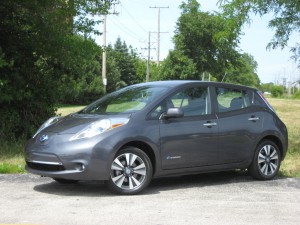 Did you ever think there would be such a thing as a “buy one/get one free” automotive road test? Well, today’s your lucky day!

With an office-to-home/home-to-office round trip of around 54 miles, when testing electric cars, it behooves me to recharge at work each day just to be on the safe side. (Another homeward-bound leg without recharging often seems possible, but this is a case where being wrong would be a big headache.) One benefit of starting each round trip with a “full tank” is that each one can be treated as a separate episode—which is how I handled the two round trips in this test and how you, gentle reader, get the BOGO.

On the Thursday afternoon/Friday morning stint, the Nissan Leaf covered 53.6 miles, 74 percent of which could have been considered to be under highway driving conditions. Even in “Eco” mode and without air conditioning being operated, the relatively speedy trip burned up two-thirds of the available charge—eight of the 12 units indicated on the charge meter.

However, on the Friday afternoon/Monday morning leg, which included a Saturday errand in between, the 59.3 miles covered consumed just a little more than half a charge (seven of 12 units), even with the car in normal drive mode, but still no air conditioning use. The big difference was the percentage of highway driving—just 34 percent on the second stint. Leaving the office on Friday with a full charge, the Leaf indicated a range of 88 miles. As of arrival on Monday, it was reporting 36 miles left, this after having already gone almost 60. A little less rapid burn-off of “juice” at slower speeds and maybe a little bit more give-back from regenerative braking in the stop-and-go portions of the trip were maintaining, if not slightly stretching, the projected range.

You’ll like whatever miles you can wring out of a Leaf. With leather upholstery, an in-dash navigation system, satellite radio, and an iPhone link through Pandora among the standard equipment in the tested SL, there’s lots of comfort and convenience at hand. Soft-touch surfaces mix with nicely textured hard plastic that doesn’t look cheap, and large door map pockets have a bottle-holder portion. One odd thing about the controls: The small, circular control knob on the console has to be moved forward to access “Reverse” and backward to access “Drive,” which is counterintuitive.

The aforementioned errand involved buying an upholstered chair that loaded easily and fit with room to spare under the sloping hatch, albeit with the rear seats folded. One drawback: When folded, the seat backs do not form a flat floor even with the cargo deck. In fact, the difference in height is quite pronounced.

The Leaf generally feels well planted on road with no inclination to wander. However, pavement cracks would jolt the car right up to the seat of the driver’s pants. It may not be as flngably fun to drive as certain small gas-engine cars, but it won’t wear you out driving it, either.

If there’s a shock risk with an electric car, it comes from the window sticker. The SL in this test had a base price of $34,840 (delivery adds $850), with another $1220 in options. All told, that came to near $37,000. That kind of money would buy more size or amenities in a conventional car, though tax incentives for electrics soften the blow somewhat.

The car world has change a lot since the Leaf was introduced in 2010. In just three short years, electric vehicles have gone from being fringe experiments to becoming accepted (for the most part) as an inevitable component of the automotive landscape.

What may have gotten lost in the conversation since Leaf’s introduction is how fundamentally good this car really is. I wrote a separate piece about the Leaf, noting my intentions to purchase one when my kid becomes old enough to drive.

Of course, Leaf isn’t alone in the electric-car game anymore, but it is still the most commercially viable and available electric car on the market. You can buy a Leaf in all 50 states, for example, something no other electric-car purveyor can claim at the moment.

The good news for 2013 is that the updates for this year seem to have significantly improved range and reduced charge times.

My full-charge real-world range was right about 90 miles. And the range-remaining readout proved surprisingly accurate. It is worth noting that our testing came during a spell of mild summer weather here at Consumer Guide global HQ.

Still, my 50-60 miles of driving each day required but three hours of replenishment on our Level 2 charger. I won’t hold it against the car that our charger is kind of a pain-in-the-ass to get to.

My primary take away from this last visit with the Leaf is this: It’s a good car. Forget that it’s an electric car. Leaf is simply a decent overall car, which just happens to run on electrons instead of petroleum distillates.

For my money, I’d go with the surprisingly complete $29,000 Leaf S, though our loaded $37,000 SV includes a ton of options that some shoppers may well find desirable.