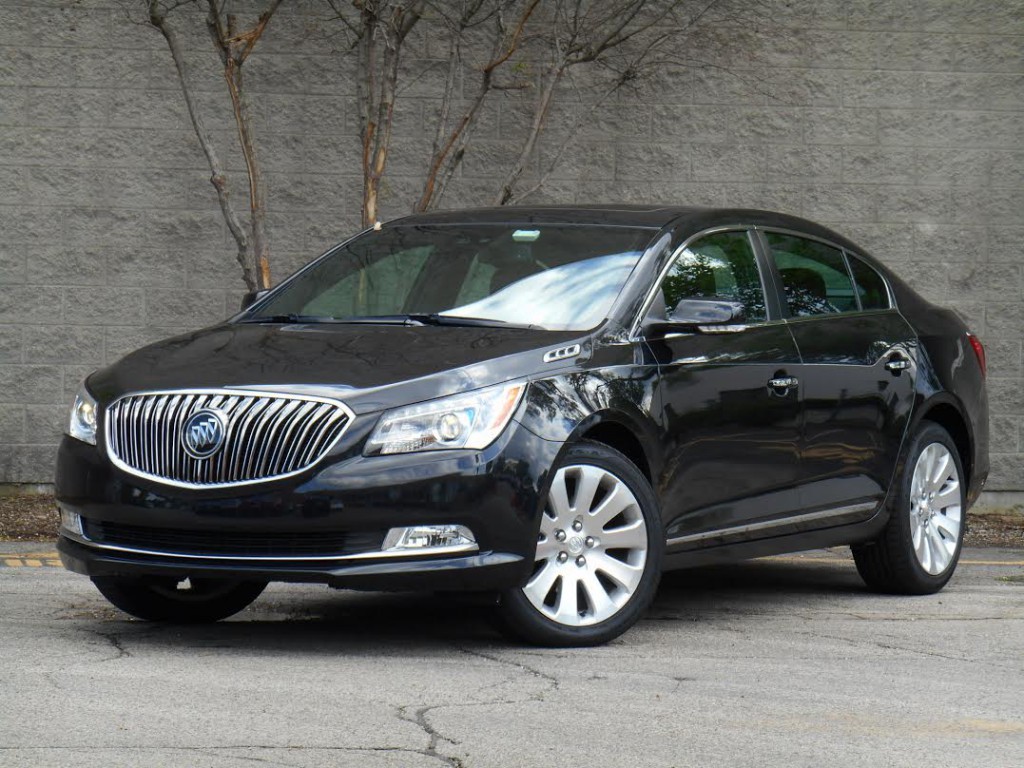 The good: Luxurious cabin, plenty of room for 4 adults

The not so good: Mediocre mileage with V6 and AWD

Recently this tester had some nice things to say about the Hyundai Genesis 3.8 sedan. For as much as he meant them, however, a slightly better bargain-luxury choice might have been waiting just around the corner in the form of the 2014 Buick LaCrosse.

The Genesis and LaCrosse Premium all-wheel-drive sedans that Consumer Guide® tested were both brimming with comfort and convenience features, many of them comparable. A few that were standard in one car may have been optional in the other, and vice versa, but the important thing is that they were there. When all was said and done, the Buick, at $50,060 with options and delivery, stickered at $2390 less than the ’15 Genesis.

To this driver’s mind, the Buick’s 304-horsepower 3.6-liter V6 was a tick smoother under acceleration than the Hyundai’s 311-horse 3.8-liter V6; the LaCrosse cabin enjoyed a little greater distribution of soft-touch surfaces for a heightened sense of luxury; and the Buick handled a degree better, resisting a slight tippy feeling in lane changes and other maneuvers experienced in the Hyundai. The South Korean product can boast an automatic transmission with 8 speeds, 2 more than its American rival, but it didn’t seem to make much of a difference in on-road behavior. Where the extra 2 ranges might play a hand is in fuel economy. In roughly equally balanced city/highway driving, the Genesis averaged around 22 mpg for me, while a 126.3-mile stint in the Buick, 70 percent of which was in city-style driving, returned 17.88 mpg. 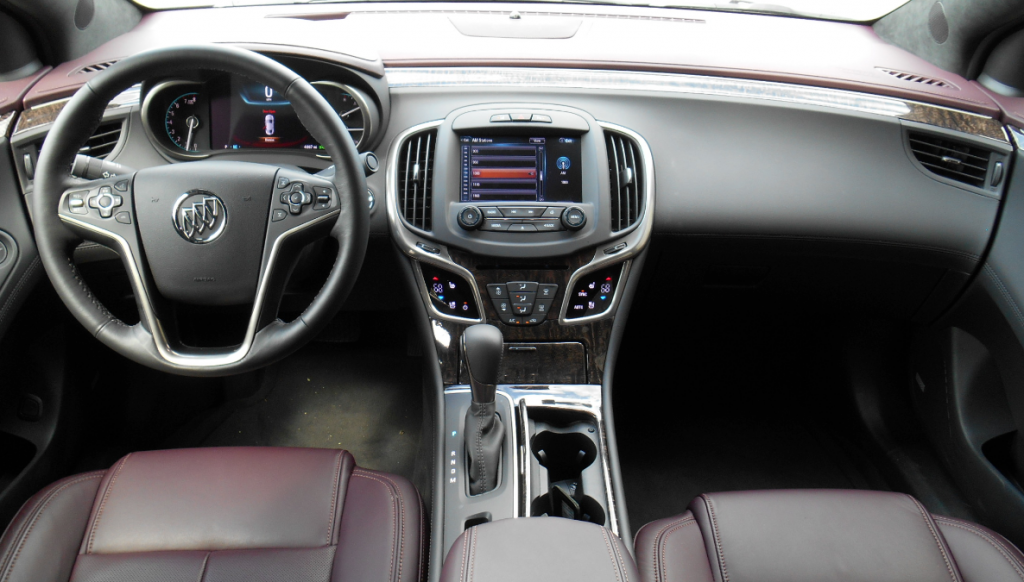 Both cars comfortably seat 4 and will accommodate a 5th adult (though a middle-rear rider in the LaCrosse will find head room a little close, and will have to straddle the driveline tunnel). Ride smoothness and interior quiet are also mutually excellent, though the Hyundai gets the nod for over-the-shoulder visibility. Still, as outfitted, the test Buick had a full array of electronic devices designed to give a driver a hand when changing lanes, reversing, etc.

The Buick seems to have an edge in cabin storage and convenience. Door pockets with bottle holders are larger than those found in the Hyundai, and the deep console box with a lid that pitches back is more convenient, too. The LaCrosse sports an ample glove box, and pouches on the backs of the front seats, and a pull-down rear arm rest with a pair of cup holders and covered storage space. 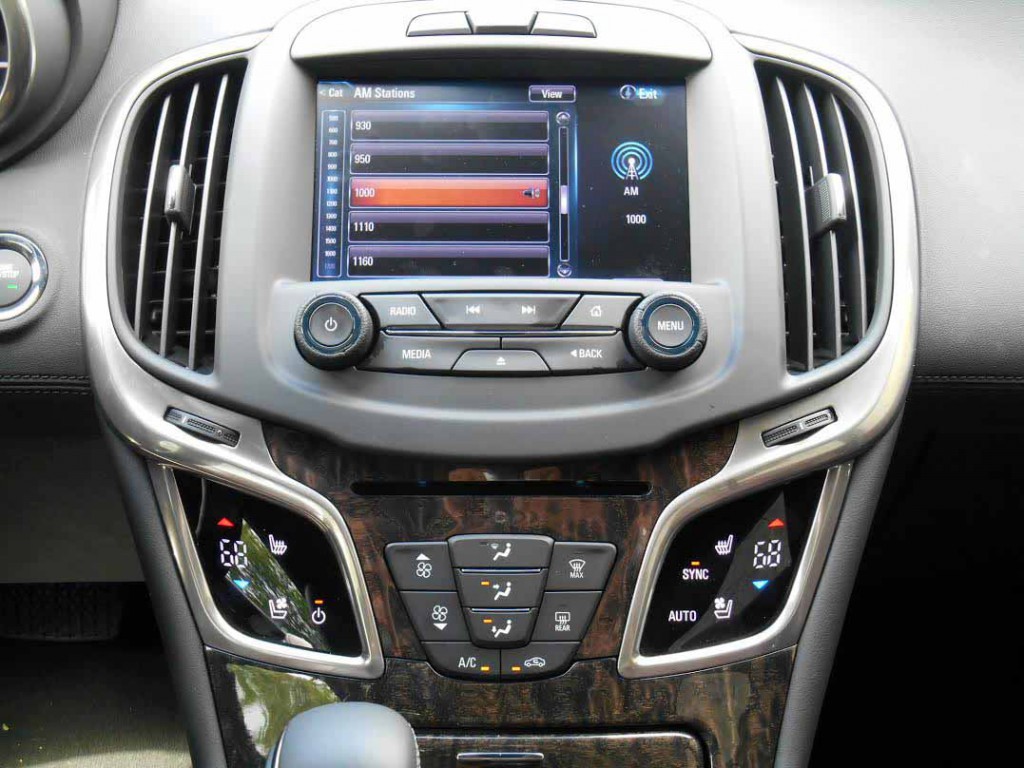 The Buick’s trunk is roughly as large and as nicely trimmed—with carpeting and covered hinges—as that of the Genesis. However, the former has a lip to get over, and some chassis structure immediately behind the rear seats prevents the floor from being absolutely flat throughout.

Why the 2014 Buick LaCrosse is a Consumer Guide Best Buy

Intellilink, Buick’s touch-screen infotainment system, reacts very well to voice commands, but this driver didn’t find it especially intuitive to use for inputting audio settings. Curiously, too, not all screen views that a driver might summon while using the system display the time—and there’s no freestanding clock. Buttons for selecting fan speed and direction, air conditioning, and defrosters are placed beneath the touchscreen. Main driving gauges are grouped squarely ahead of the driver in a hooded pod.

All in all, it’s a nice package of features in a large car that still handles itself suavely. Plus, it makes room for arms and legs without demanding them in payment.

While we all go gaga over the new, and newly refined, Hyundai Genesis, it’s important to take a breath and remember what we mean by refinement. 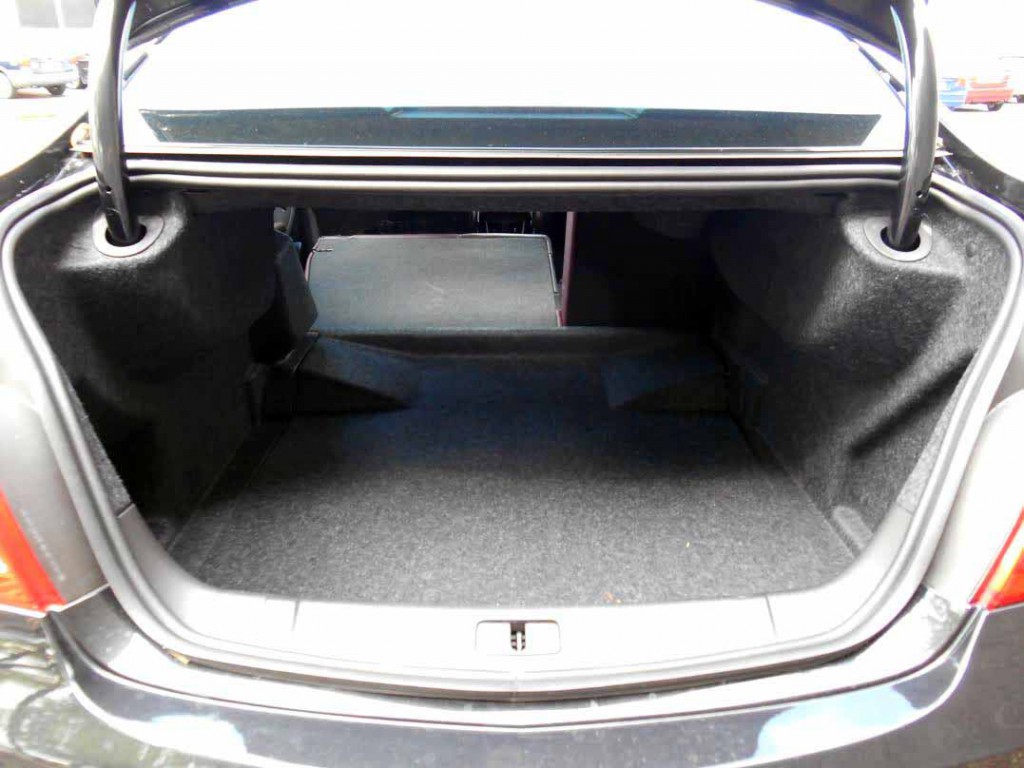 Lacrosse offers plenty of trunk space, plus folding rear seats, which expand the load floor considerably. A ridge in the floor aft of the rear seats can complicate loading and unloading, however.

Because, as good as the 2015 Genesis is, and it is very good, it is not better finished, smoother riding, or quieter than the Buick LaCrosse.

Unfortunately for Buick, the LaCrosse isn’t especially sexy. It’s not rear drive (when not AWD), isn’t offered with a V8 engine, and its styling is growing anonymous.

Our option-packed AWD test car came to just over $50,000, which may seem like a lot until you compare the LaCrosse to the Genesis, which is being pitched to the public as a luxury-car bargain. A recent test V6 Genesis with AWD came to about $53,000, and indeed seemed like a pretty good deal—compared to the high-end cars it’s associated with most often.

No, this big Buick isn’t especially fun to drive, and it’s really not meant to be. We’ll give the sexy nod to the Hyundai Genesis, which will certainly appeal to a younger audience. LaCrosse, instead, is an exceedingly refined near-luxury sedan that will move four passengers in extreme comfort. For those who don’t equate luxury with a rumbling exhaust, intimate road feel, and go-kart handing, LaCrosse makes all sorts of sense.