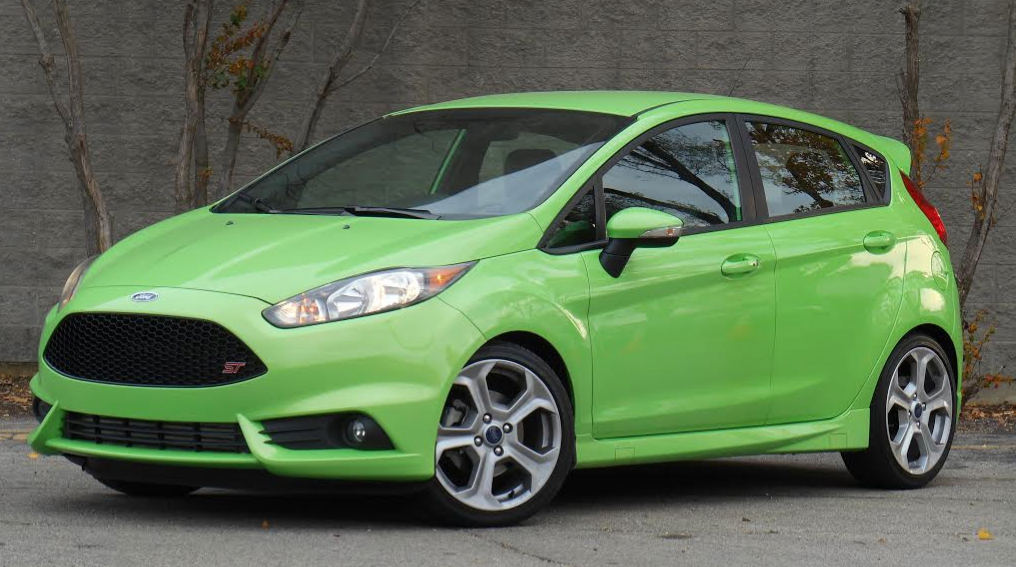 The good: Surprisingly easy on gas

The not so good: Cramped cabin, limited cargo options

Back in the ‘80s, many companies jumped on the “hot hatch” bandwagon personified in America by the Volkswagen GTI. There’s been a resurgence of these neat little cars of late, and though Ford largely took a pass the first go-round (at least in this country), it has a couple of strong entries in the segment today. 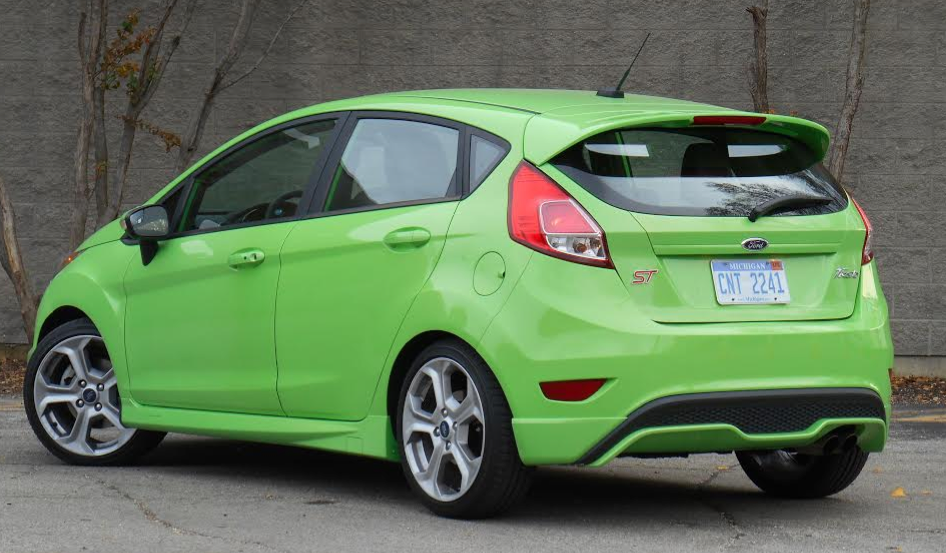 The smaller (and cheaper) of the two—the Fiesta ST—showed up at our office bathed in “Sight-Searing Green” (not the color’s official name … though maybe it should be) with a transmission you shifted yourself—just as the Hot Hatch Gods intended. I’m not sure what “ST” is supposed to stand for, but “Street Terror” wouldn’t be grotesque hyperbole. 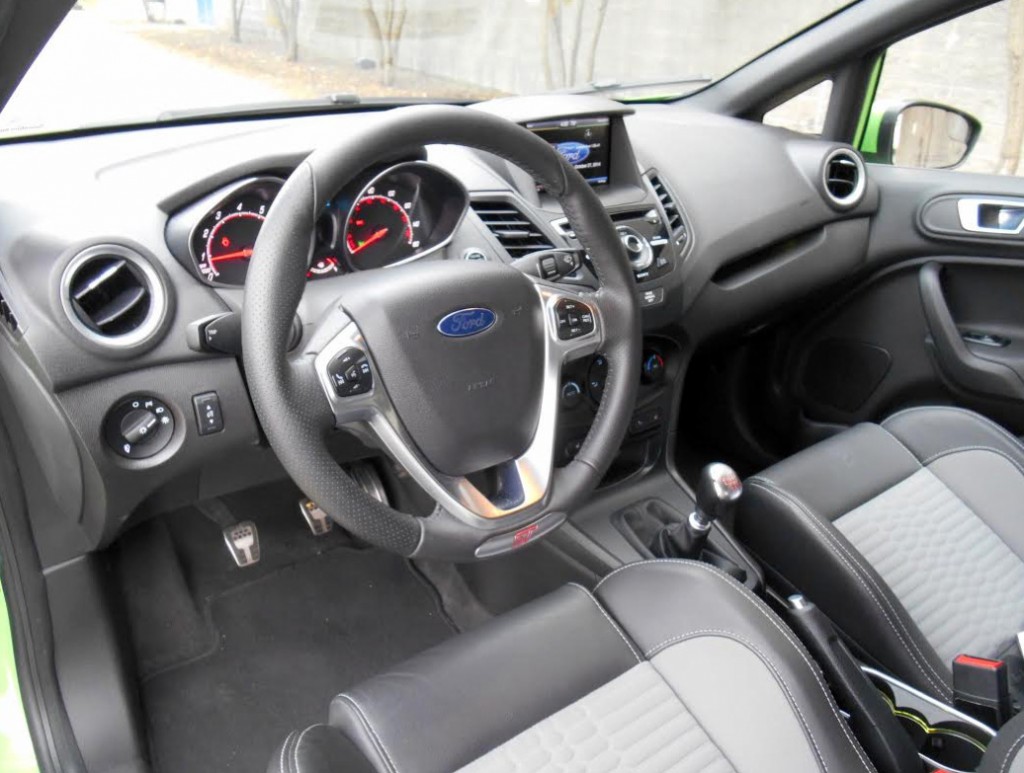 Despite the $1995 Recaro seat package, Fiesta ST’s cabin is more functional than it is luxurious.

Credit that to the ST’s potent little turbocharged 1.6-liter four that substitutes for a decidedly less potent non-turbo version of the engine in lesser Fiestas—and boosts horsepower by almost 65%. Add to that sport suspension and wider weenies, and you’ve got yourself a rather sporting little ride.

Unlike some small-displacement turbocharged engines, this one suffers very little turbo lag. It’s not overly powerful at lower revs, but it doesn’t take long for the ponies to start stampeding. Keeping the engine on the boil is the job of the 6-speed manual transmission, which shifts with precision.

Our rough Chicagoland roads probably aren’t the best playground to show off the handling prowess of the ST, as too much of the time it’s bouncing and jiggling down the tarmac. But when you do get to carve a corner, the ST is a willing participant in your playtime antics.

Now for the dull, boring, practical side.

Once settled into the heavily bolstered seats (which may not suit everyone), you notice that visibility is okay-to-good all the way around. However, the sun visor—when swung to the side—doesn’t extend and leaves 4” of unblocked window. The dashtop and armrests are padded, but only slivers of bright trim accent what is otherwise a study in black. For such a narrow interior, it’s a bit surprising that the touchscreen (which holds the tiny, virtual, station-select buttons) and the climate controls (consisting of sensible rotary temperature and fan knobs along with individual mode buttons) are such an awkward reach. 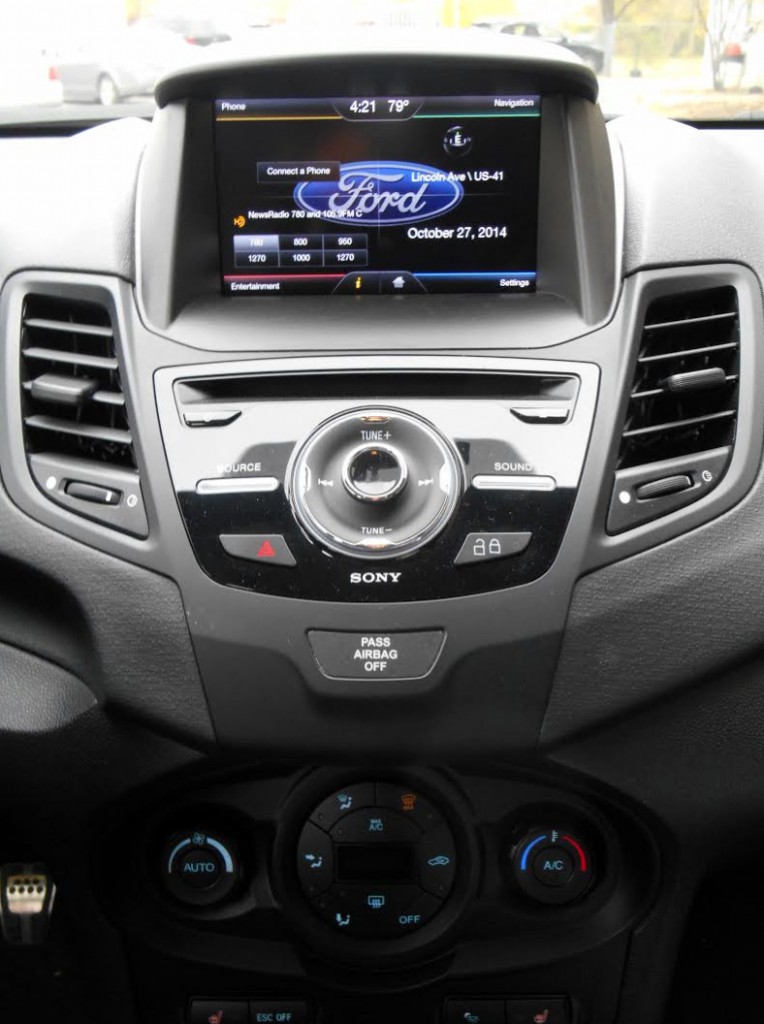 The MyFord Touch touchscreen is surprisingly difficult to reach from the driver’s seat.

Cargo versatility isn’t the best. The cabin boasts the usual storage compartments, but all are very notably on the small side. In back, the cargo space is narrow, there’s no underfloor storage, and when folded, the rear seat backs don’t lie flat.

In the Fiesta, Ford has a reasonably competitive little subcompact that makes its mark with good fuel economy and some unusual-for-the-class features. What the ST does is infuse the Fiesta with a healthy injection of steroids that turns this little econobox into a feisty little playmate for the hot-hatch crowd.

If you’re looking for an affordable subcompact car that delivers invigorating performance, your choices are few. The list basically boils down to three candidates: the Fiat 500 Abarth, Mini Cooper S Hardtop/Hardtop 4 Door, and our test subject here, the Ford Fiesta ST. Of this trio, the ST is our favorite. The 160-horsepower Abarth is a snarky delight, but its bite doesn’t quite match its bark, at least in terms of straight-line acceleration. The 500’s extra-tiny, two-door-only dimensions also make it the least practical of the three. The 189-horsepower Cooper S comes close to matching the ST in power and has a more upscale feel, but it’s significantly pricier (especially when options are added). And, the Mini’s interior layout often favors whimsical design over ideal ergonomics.

Though the basic Ford Fiesta doesn’t feel anywhere near as special or eye-catching as a Mini or Fiat 500, the ST’s hot-hatch upgrades close the gap. The heart of the ST is an overachieving turbocharged 1.6-liter 4-cylinder that puts out 197 horsepower. It comes only with a manual transmission, a slick-shifting six-speed that’s a delight to use. (If you want an automatic transmission, you’ll have to opt for the Mini or Fiat.) The eager, free-revving powerplant exhibits no turbo lag; it seems to like nothing more than being wound out to its redline. The ST’s 0-60 times in the 7-second range aren’t lightning quick by today’s standards, but the subcompact dimensions and urgent engine note make it feel plenty fast, and satisfying. 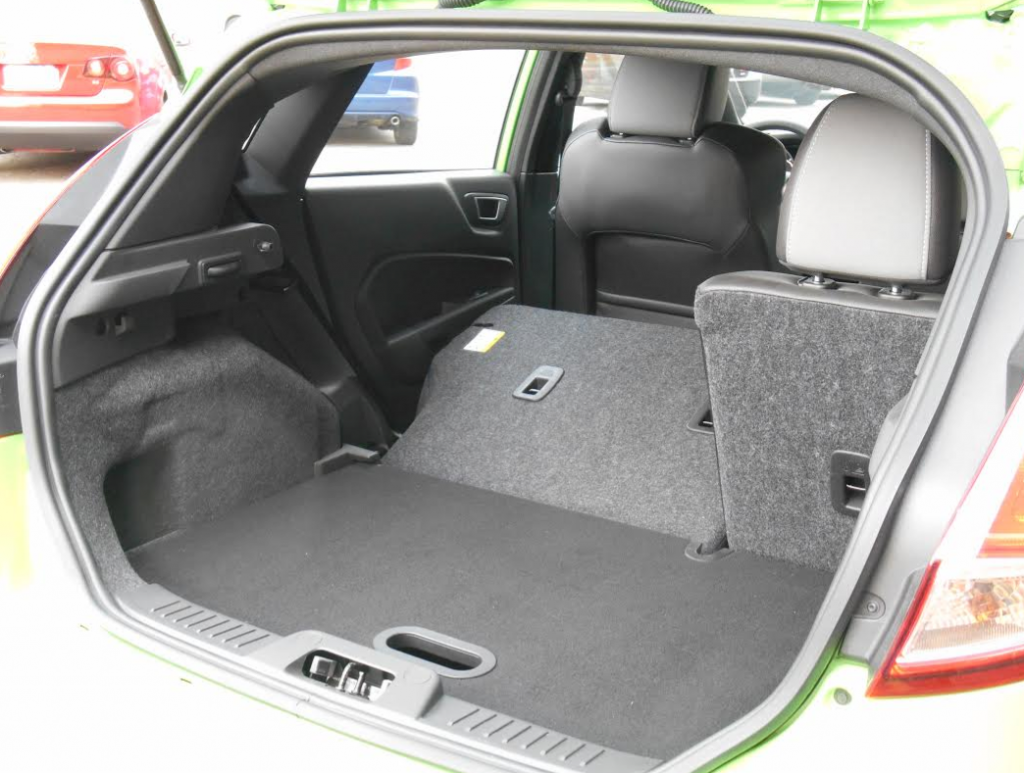 For a hatchback, Fiesta does not offer the cargo flexibility some buyers might expect. Note that the rear seatbacks do not fold flush with the cargo floor.

The ST’s suspension has been suitably upgraded as well. Seventeen-inch wheels on performance tires take the place of the 15s or 16s on mainstream Fiestas, and a sport-tuned suspension, extra-quick steering ratio, upgraded brakes, and Torque Vectoring Control system provide sharp moves. Not surprisingly, the sport suspension makes for a stiffer ride, but the ST is perfectly livable over most road surfaces.

The ST’s sporty exterior styling bits, such as the mesh-grilled front fascia and rear spoiler, communicate the car’s performance intent without veering into cheesy boy-racer territory… at least if you avoid the eye-searing, extra-cost Green Envy paint seen on our tester.

The optional heated Recaro seats have pronounced side bolsters that are great for autocrossing, but perhaps a bit too snug for everyday commuting comfort for some passengers. And, they’re only available in a $1995 package that also includes leather/cloth upholstery and heated power mirrors with turn signals. The nearly $2K price tag seems especially steep, given the ST’s $21,400 base price.

Still, even with the pricey seats, the Fiesta ST is a performance bargain. Despite its humble basic platform, the ST feels like a finely tuned performance machine and not simply a collection of go-fast add-ons. Fuel economy is a strong point too; the ST is rated at 26 mpg city/35 highway, and we averaged 31.6 mpg in our testing. It’s hard not to like a car that blends the frugal practicality of a small 4-door hatchback and the driving thrills of a sports car as well as the Fiesta ST does.