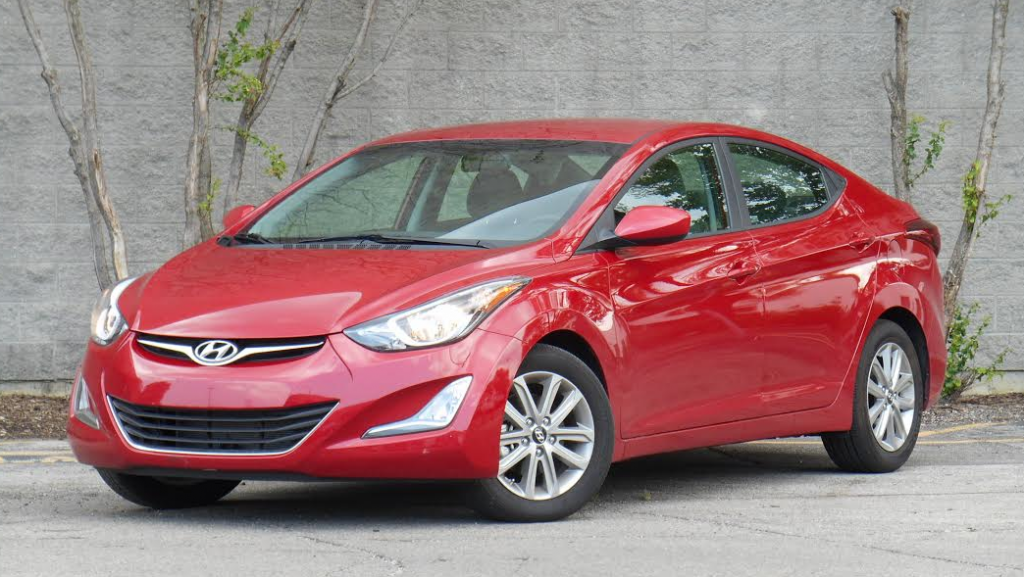 The not so good: No surplus of power, fuel economy trails class best

The most basic model of Hyundai’s compact-car lineup, the Elantra sedan in SE trim, offers good small-car room for people and cargo at a very manageable price. It just doesn’t provide quite the refinement that some other cars in the field can put on the road, and that’s what might give prospective buyers pause.

Heads, legs, and shoulders of front-seat occupants won’t be cramped in the Elantra, and a couple of adults will have acceptable knee and headroom in back. Behind them is a pretty good-sized trunk that’s wide at the back, but narrows a bit between the wheelhouses as it approaches the 60/40 split-folding rear seat that can drop to open more space if needed. (The trunk floor is flat, but a substantial lip will require some lifting when removing cargo.) Interior storage includes a fairly ample glove box, deep console box, a couple open trays and twin cup holders in the console, pockets with bottle holders in all 4 doors, a cargo net attached to the back of the front passenger seat, and a center-rear pull-down armrest with two cup holders molded in. 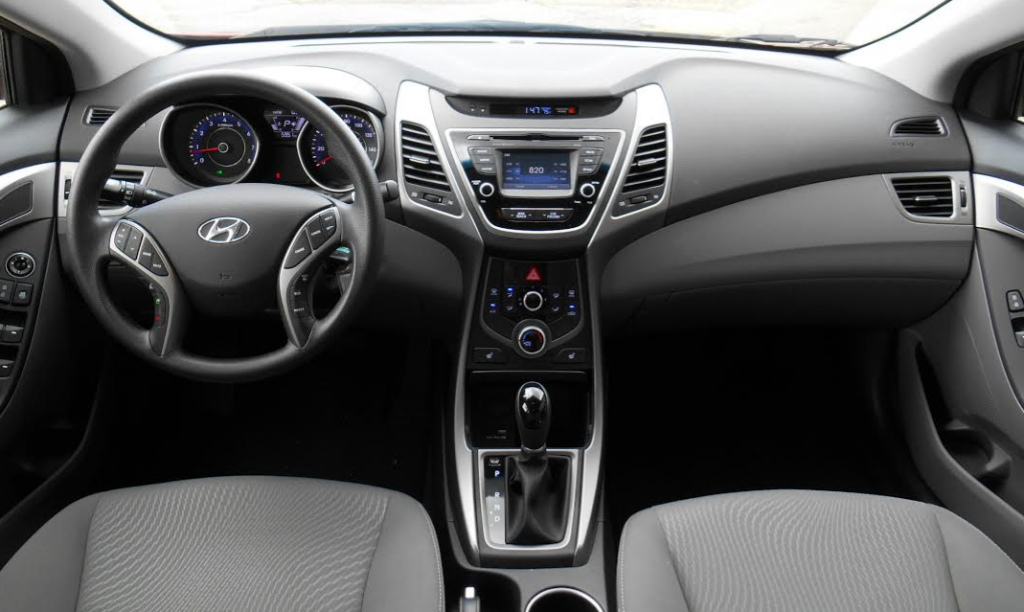 Even in entry SE trim, Elantra’s cabin presents reasonably well. Included in the Preferred Package is a rearview camera and a 4.3-inch display as seen above.

All in all, it makes for an accommodating, if not entirely plush, passenger space. Workaday cloth seats and plastics with just a modicum of “soft-touch” fill the interior; at least the upper and lower dash were in slightly different shades of gray. Consumer Guide®’s test car came with patches of cloth door trim that were included in a major option package. Satin-look plastic trims door panels and the climate/audio ensemble in the dash. A wholly acceptable cost-cutting measure is a manual seat-height adjuster; less acceptable is confining it just to the driver’s seat. This driver’s official test spouse felt she was sitting lower than she would have liked in the right-front seat, but there wasn’t a darn thing she could do about it. 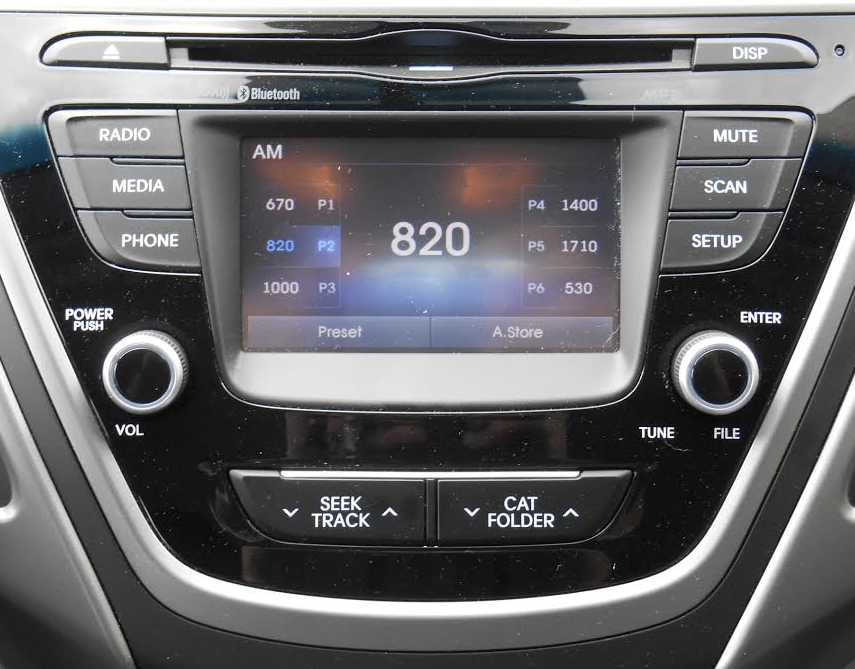 In our book, having a real tuning knob is worth half a letter grade all by itself.

The Elantra SE is powered by a 1.8-liter dohc 4-cylinder engine. Good for 145 horsepower and 130 lb-ft of torque, this engine performs well enough to provide safe, confident expressway merging and passing. However, stabbing the throttle at highway speeds can cause the 6-speed automatic transmission to hang up for a few moments as it drops a gear or two before rebuilding momentum. This also comes with some engine roar. Otherwise, the engine at cruise is audibly inobtrusive. Around-town acceleration is slightly leisurely, but never annoyingly so—though this driver did not use the Active Eco control that modifies engine and transmission-shift behavior in pursuit of better fuel economy. Maybe he should have: After 138 test miles, the Elantra averaged 26.28 mpg, with 54 percent of miles in city driving. That’s a bit disappointing, considering that the EPA combined number is 32 mpg, with 28 mpg city/38 highway ratings.

Similarly, ride and handling are commendable without going far enough to wow anybody. Most of the minor stuff that an urban expressway or side street will throw at a car is absorbed reasonably well by the Elantra. Body lean was well controlled, though steering (which comes with adjustable modes as a standard feature) seemed just a bit too stiff for this driver’s taste. Hyundai has addressed noise issues in the Elantra for 2014, which is good, because out on the highway, there’s still some wind rush that comes through and passing vehicles don’t exactly whisper by.

Climate controls are governed by dials for temperature and fan speed, plus easy-to-recognize function buttons. Setting radio presents was easy and intuitive, though the optional 4.3-inch touchscreen was a little small to clearly display info. Twin hooded tachometer and speedometer dials are easy to read, as is the vehicle-information display that shows up between the dials.

CG’s test Elantra SE started at $18,200—or $1000 more than one with the 6-speed manual transmission. In addition to aforementioned standard features, the SE has hill-start assist, 4-wheel disc brakes, body-color door handles and mirrors, air conditioning, AM/FM/CD/MP3 audio with satellite radio (except in Alaska and Hawaii), input jacks for various digital devices and a couple of power plug-in points, remote keyless entry, heated exterior mirrors, a tilt-and-telescoping steering wheel with cruise control buttons, and an emergency tire puncture repair kit with inflator in place of a spare tire. 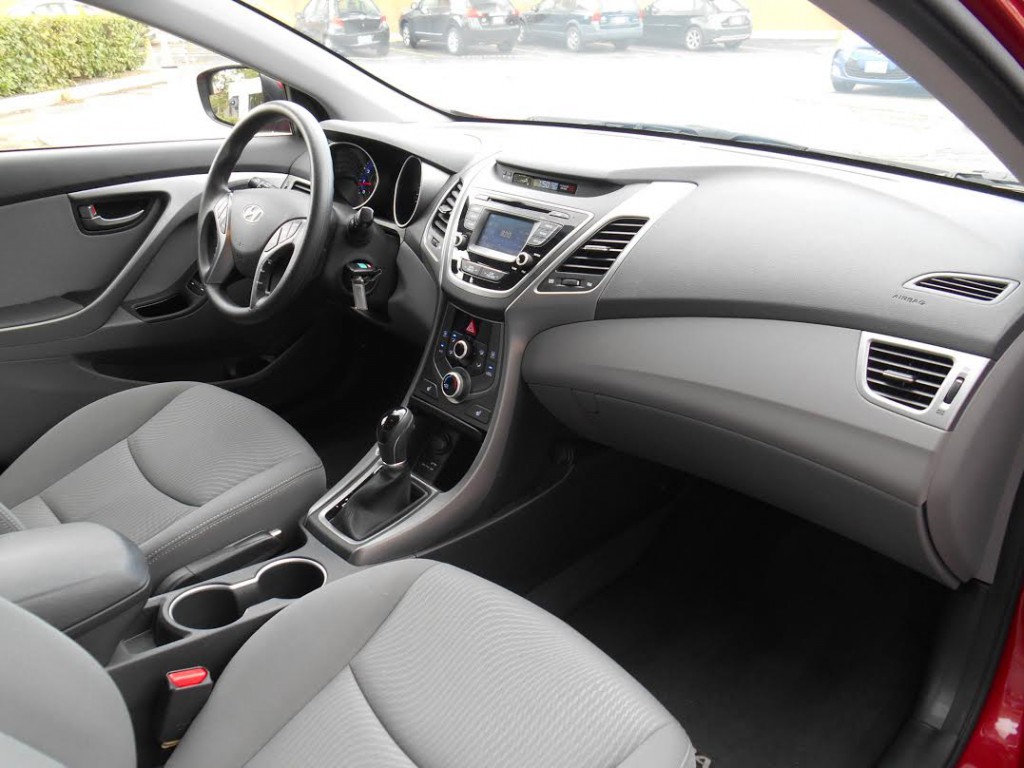 Elantra’s cabin is roomy for the class, with plenty of head and leg room and shoulder room up front.

If this is entry-level transportation, let’s have more of it. While Elantra isn’t as absolutely refined as the Chevrolet Cruze, or as innately sporty feeling as the Honda Civic, it is decidedly pleasant in its own way. 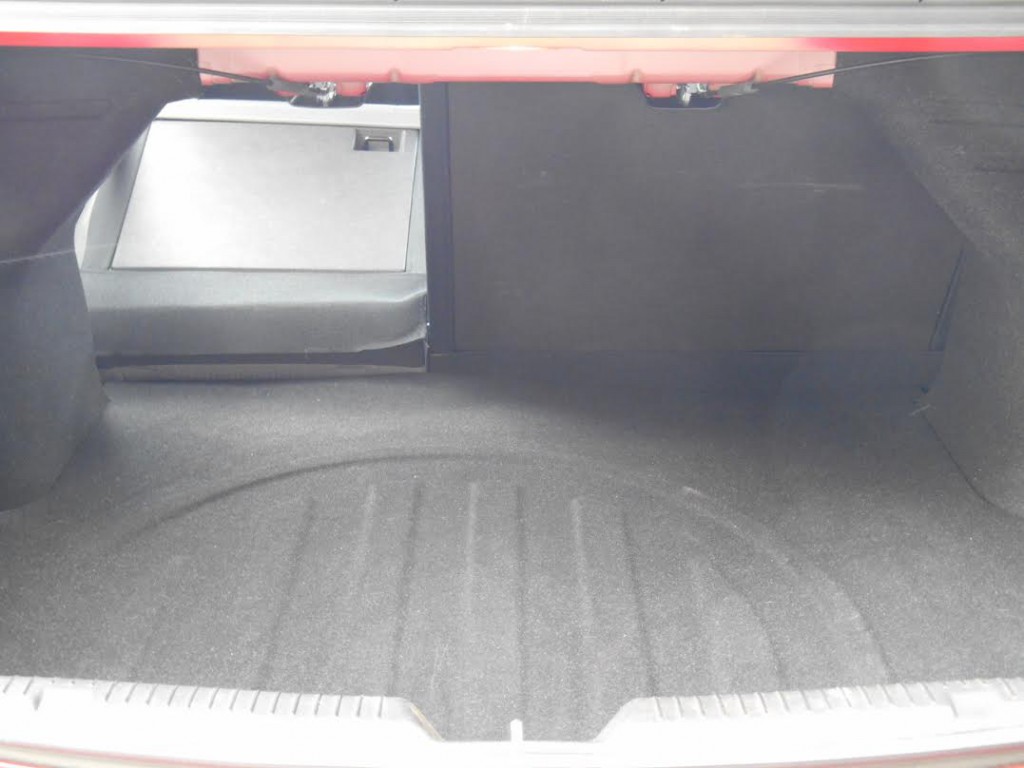 Elantra’s rear seats don’t fold flush into the cargo floor, but the trunk is usefully large as is the decklid opening.

Acceleration is nothing special, nor is the handling, but the ride is surprisingly compliant, and the cabin roomy and welcoming.

I’m most impressed by the Elantra’s highway behavior. At 65 mph this compact Hyundai feels like a larger car; it’s fairly quiet, composed, and mostly immune to bad road surfaces.

At just over $20,000, our test car is something of a bargain. It’s good to know that as Hyundai chases the market higher with models like the Genesis and Equus, it hasn’t forgotten that the brand is still about value.