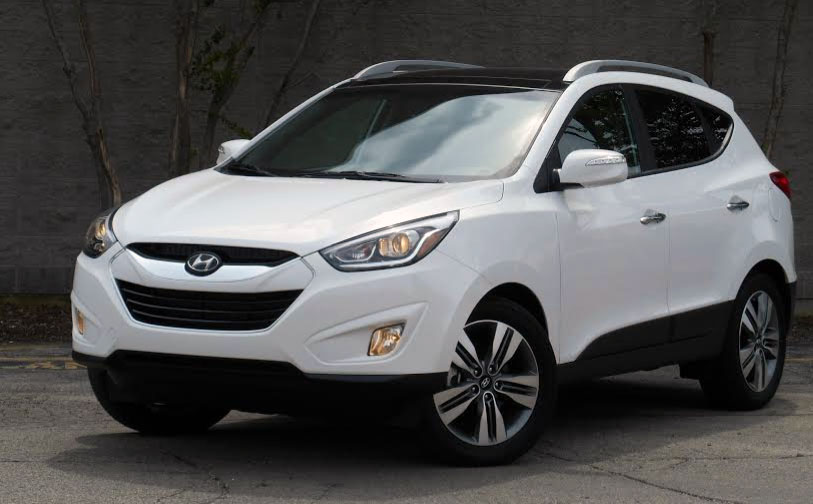 The not so good: Cabin fit and finish trail class leaders

Click here for more information about the Hyundai Tucson

Hyundai’s compact crossover sport-utility vehicle gets engine tweaks and some equipment upgrades that make the 2014 version better than its immediate predecessors with the same basic package.

Consumer Guide® editors took a turn in a front-wheel-drive version of the top-trim Limited. This high-end Tucson comes standard with a 2.4-liter 4-cylinder engine now with direct injection and a slight boost to 182 horsepower. It is joined to a 6-speed automatic transmission. It’s a combination that provides safe but unspectacular performance on street or highway. It wasn’t a fuel-mileage standout, either, at least in this driver’s experience. In a run of 163.8 miles (73 percent city driving), the 2.4 engine averaged 20.48 mpg; EPA estimates are 21 mpg city and 28 mpg highway. 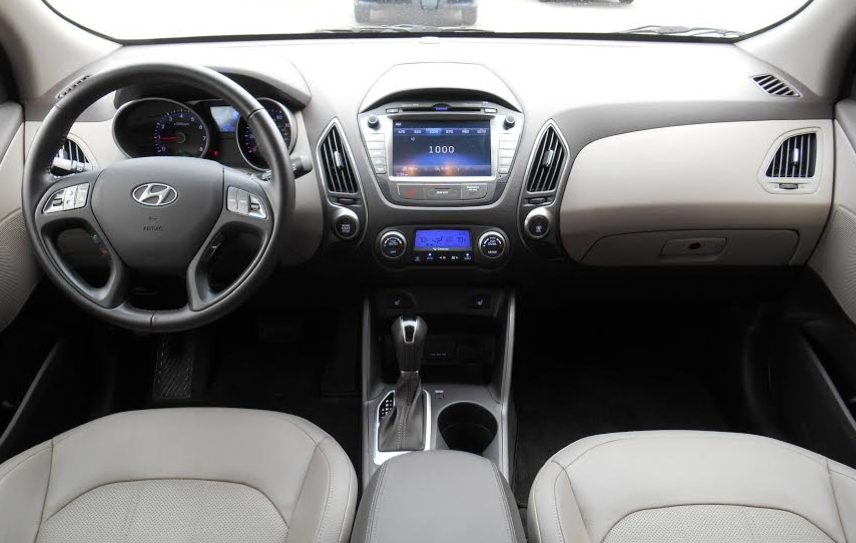 Tucson’s cabin is tidy and attractive, but materials quality falls sightly below the best in class.

With its compact dimensions and responsive steering, the Tucson is a pleasant handler. Ride is well composed over all but seriously distressed pavement. 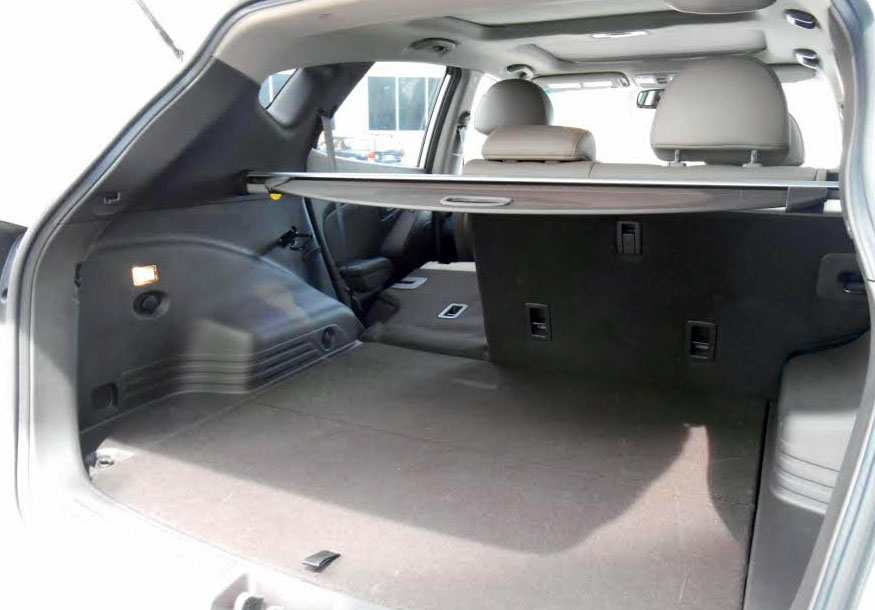 Tucson has space for plenty of cargo, and flush-folding rear seats allow for easy loading of larger items.

Soft-touch materials are found on areas likely to receive the most contact from passengers. Front passengers will notice good leg and head room. Three adults may fit in the rear in a pinch, though two will find things far less crowded. The 60/40 split-folding rear seats don’t seem as plush as those in front. The Tucson has the same rising-to-the-rear styling that many small crossovers seem to have these days, which means the same compromised visibility to the rear corners.

There’s slide-in loading to the flat-floored cargo area. Rear space is somewhat limited but can be quite a bit better with the rear seats folded. They drop nearly flat, with carpeted covering to smooth the transition between the cargo floor and seat backs.

A simple, easy-to-use control layout includes climate controls that consist of dials and a few buttons—though repetitive-push buttons are used to govern fan speed. The bank of climate controls is separate from the audio and optional navigation controls that register on the central touchscreen. CG’s test Tucson was equipped with the nav system, which is accompanied by a 7-inch screen. Audio and nav control buttons are stacked on either side of the screen; the audio buttons are closest to the driver, but navigation buttons are on the far side and somewhat hard to reach.

The front-drive Tucson Limited starts at $26,300—not bad for a high-feature small SUV. CG’s test vehicle tacked on the Technology Package with the aforementioned navigation system, a panoramic power sunroof, LED taillights, and premium audio system. Carpeted floor mats were added, too. With delivery, the test example came to a still-believable $29,850.

Just as Hondas and Toyotas have a built-in advantage due to their established reputations and high resale values, Hyundais get an automatic boost in my book on account of their great 5/60 bumper-to-bumper and 10/100 powertrain warranties. (For the record, Kia and now Mitsubishi offer similarly impressive coverage.) And the vehicles themselves have been quite impressive of late – and almost always a good dollar value – and in these regards, the Tucson follows suit.

Something that struck me right away (well, after a few miles of driving) was that the transmission would kick down very quickly when the throttle was stabbed from speed – something I really appreciate in the cut-and-thrust of urban driving. And there was decent power when it did. However, I also noticed that there was more thumping and bumping from the suspension over larger pavement imperfections than in the best in this class. Nothing really offensive, mind you, just not top-notch. 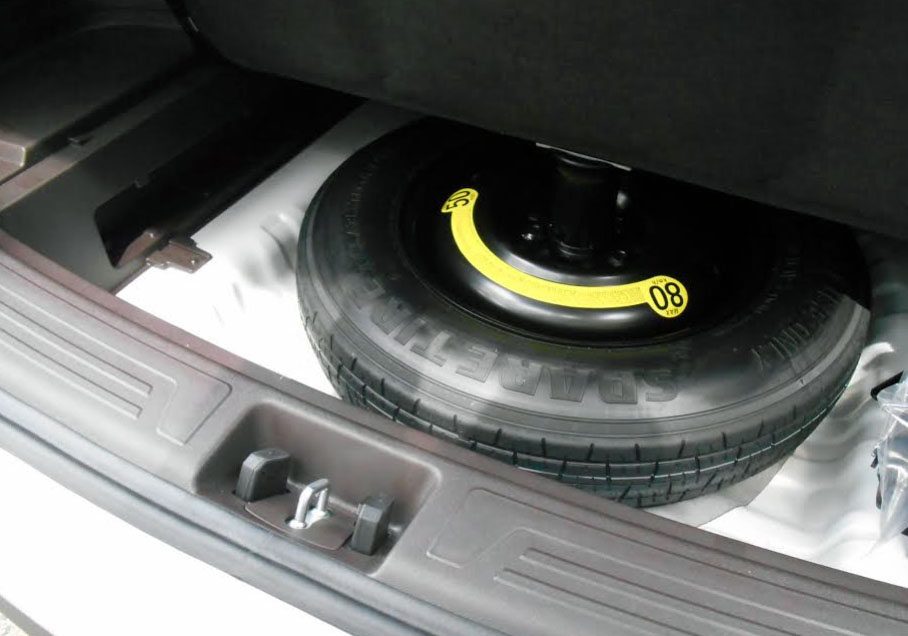 Under the Tucson’s load floor there’s room for a mini spare and s few smaller items.

Something else that isn’t top-notch is the interior. As John alluded to, there’s thin padding on the door tops and armrests – which are indeed your usual “touch points” and something I really admire – but the dash is hard plastic; many of the newer designs in this class have padded dashes. However, the Tucson earns points in this regard for having an exceptionally clean, sensible, and mostly handy layout (some audio controls are a bit of a stretch), and our tester’s two-tone tan color scheme with silver trim kept it from looking cheap. Not sure I’d feel the same if it were solid grey, though.

Visibility isn’t top-notch, either. The front and rear roof pillars are thick enough to block quite a lot of your view (the latter despite little ¼ windows), though the side pillars aren’t as bad. (Often it’s the other way around.)

In terms of passenger and cargo room, the Tucson is par for the course – which is to say, really darn good — though not all competitors have a flat-floor cargo area after the rear seat backs are folded. The only misstep here is that there aren’t any strong tie-down hooks except on the seat backs … which you just folded down. (There is, however, a handy 12-volt outlet.) Also, many competitors have hidden, segmented storage areas beneath the load floor; in the Tucson, there’s just some unpadded “impromptu” space around the spare tire.

Although our well-equipped top-line Limited seemed a bit pricey at close to $30,000 – and that’s with just front-wheel drive – note that a base all-wheel-drive GLS can be had for less than $24,000, with the step-up SE checking in at under $26,000. One of those would probably be all the compact SUV most folks would need, and are certainly more in step with the value equation for which Hyundai has become famous.