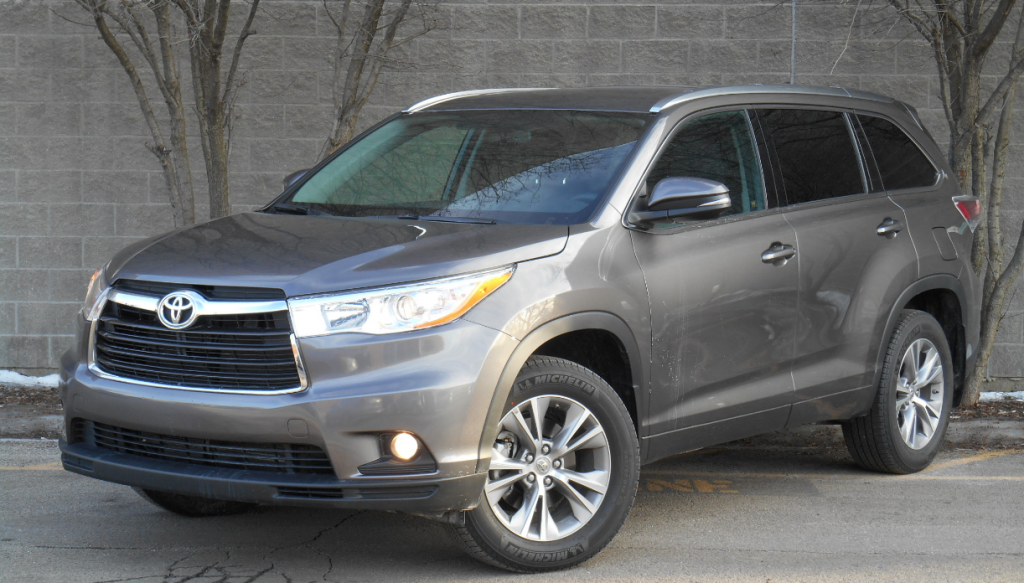 The great: Room for the family, refined V6 power

The not so good: Middling observed fuel economy

The 2014 Toyota Highlander has a brawny new look, a spacious interior with nominal room for 8—and, unfortunately, a bit of a sweet tooth for the fruit of the pump.

We tested an all-wheel-drive XLE, which is one step short of the top-end Limited model. Like most Highlanders, it comes with a 270-horsepower 3.5-liter dohc V6 and a 6-speed automatic transmission. (Only the front-wheel-drive version of the entry-level LE can be had with a 2.7-liter 4-cylinder engine, and the gas/electric Hybrid Limited uses a continuously variable transmission.) The V6 is fairly smooth and generally quiet, even when pushed, and the automatic trans does its work discreetly. Still, acceleration was only slightly above the level of “so-so,” even with just one or two people aboard. EPA fuel-economy ratings for the AWD Highlander V6 are 18 mpg in the city, 24 mpg on the highway, but this driver saw just 17.93 mpg from a trip of 127.8 miles, 58 percent of which was under city driving conditions. 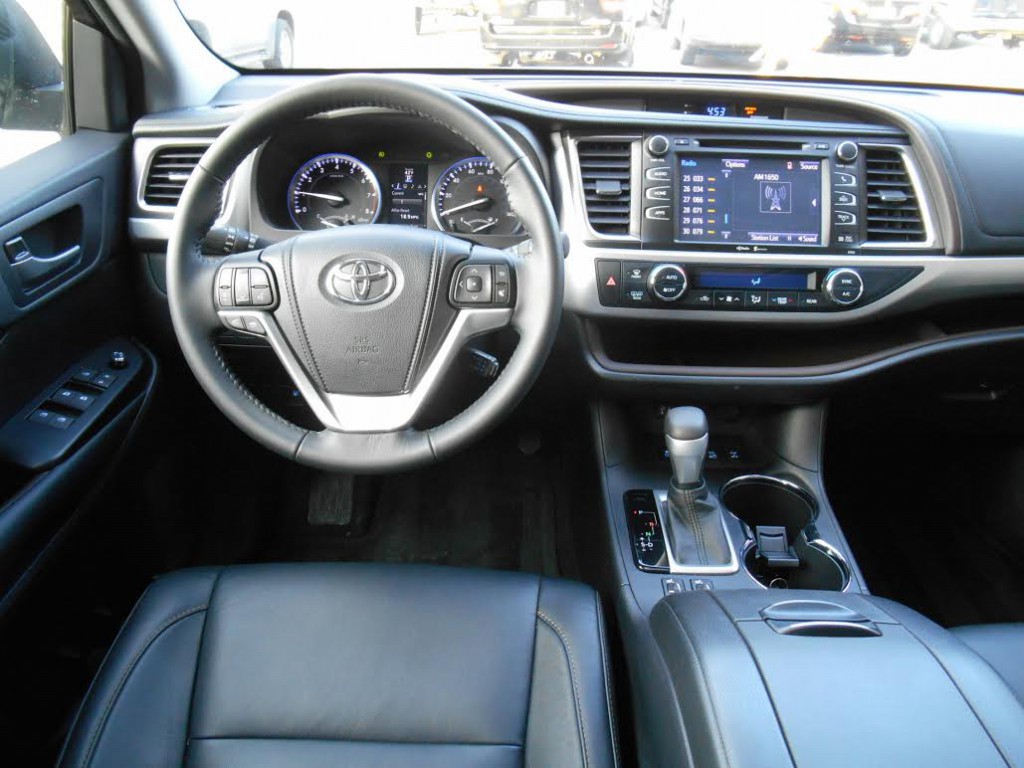 Our test vehicle started at $37,500, but the bottom line was fattened up a bit with the $1810 BluRay DVD video entertainment system for rear passengers. (The only other factory-installed option for the XLE is captain’s-chair seating with folding side table for the middle row.) Eighteen-inch alloy wheels, hill-start/downhill-assist control, “Smart Stop” system, power liftgate and moonroof, leather upholstery, heated front seats, second-row side-window sun shades, back-up camera, Entune infotainment system, and navigation system are all standard features.

The Highlander in our test was possessed of comfortable seating, a good driving position, and fairly good visibility. Head room was good and middle row riders will find sufficient room for feet and knees. There’s a flat-enough floor and enough east-west space to seat three adults in row 2—however the in-betweener will have the BluRay player staring him or her in the face.

The third-row seat has a low cushion and not a lot of leg room, so it might best be left to members of the Future Adults of America club. There are three head rests built into the seat, but maybe three toddlers would happily fit across that seat—and they’re supposed to be in boosters anyway. Access to the third row isn’t too complicated; flipping a lever on the second-row seats lets them track forward to open a path to the rear. 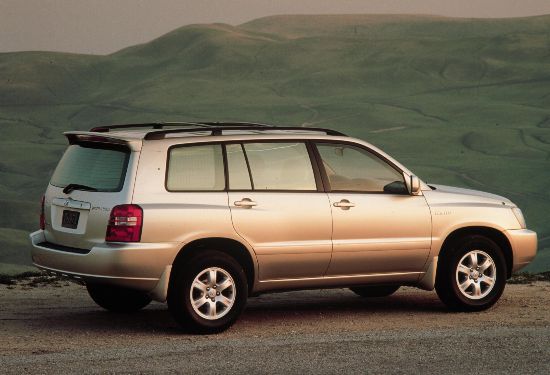 Some minivans and 3-row SUVs don’t leave much cargo room when all seats are in use, but the Highlander still has decent space. With the back row folded (control straps on the back of the seats make raising and lower the seats easy), there’s a large flat-floored cargo area at your disposal. Second- and third-row seats are both of the split-folding variety for various cargo/passenger loading configurations. For incidental storage, there’s a low-set glove box, a long open tray under the instrument panel, door pockets (albeit small ones in the rear doors) with bottle holders, and a roll-top covered bin/arm rest on the center console. There are cup holders in the console, in the pull-down center arm rest in the middle row, and built into the sides for third-row passengers.

Instruments were easy to read, and switches for ancillary functions were handy. Audio settings were easy to program on the central screen, and thumb buttons on the steering wheel reduced the need to contact the screen. Climate-control buttons are arrayed under the screen, but still reside high enough in the center of the instrument panel that they are a breeze to operate. All in all, the Highlander can be honestly called user-friendly.

Toyota’s midsize SUV is on the big side, so it doesn’t have toss-around maneuverability. Most drivers will want to exercise a little care in selecting parking spaces and when leaving them, for instance. At least steering isn’t an impediment to this—it’s nicely weighted and responsive. The challenge of our immediate-post-winter potholed Chicago streets was well met by the Highlander’s dampers, but a stretch of rippled expressway pavement seemed to register every little wiggle in the cabin.

The Toyota Highlander can swallow up most of what and whom you have to carry at what seems like an appropriate price. If it did a better job of sipping from the fuel tank, it could be a lead-pipe-cinch value.

The Toyota Highlander’s redesign for 2014 brings a raft of improvements that build on the strengths of the previous-generation model. The expanded passenger and cargo room is an obvious highlight, but the upgraded cabin and new technology features are equally integral to the new Highlander’s appeal. 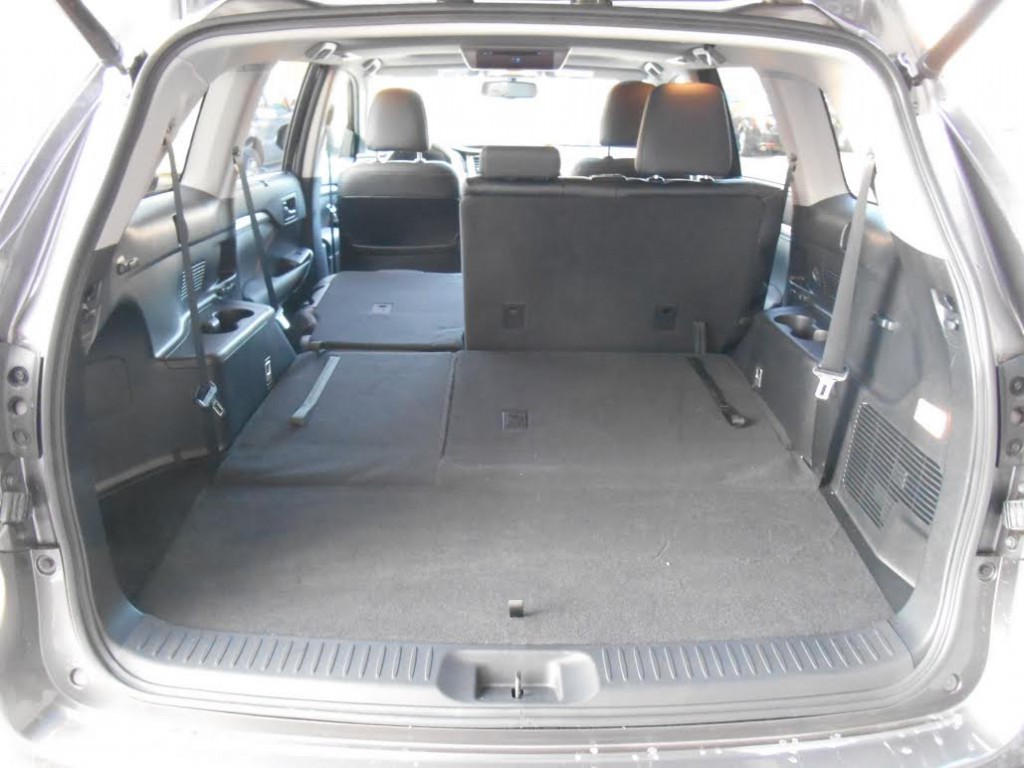 The cabin is a high point. There are plenty of small-items storage spots, highlighted by a very generously sized center console bin. The interior materials are notably improved, with more soft-touch surfaces and some nice contrasting trim pieces for added visual interest. There are some welcome functional improvements as well. The dashboard has a handy inset storage tray for cell phones, iPods, and other portable devices; the tray has a pass-through for wires to connect to the USB and other jacks at the front of the console, thus keeping them neatly tucked away (and not IN the way). The climate controls and touchscreen infotainment system are logically laid out and simple to use. I would have preferred dial controls for some functions, but at least Toyota makes its push buttons large enough to use easily while driving.

The new Highlander’s dynamic improvements are a bit less pronounced, though it is still quite competitive in its class. The V6 supplies ample power in most situations, and is EPA-rated at only slightly less than the available 4-cylinder; we recommend stepping up to the 6. The added passenger and cargo room mean that the Highlander’s size and heft is apparent in tight quarters. However, the nicely balanced steering and decently compact turning radius mean it’s still quite maneuverable for its size. The ride is absorbent over most surfaces, though sharp bumps and potholes can induce a clunky feel. We recommend sticking with the 18-inch wheels instead of the available 19s.

The Highlander has long been a must-see option in the midsize crossover SUV category, and the new 2014 model solidifies that status.