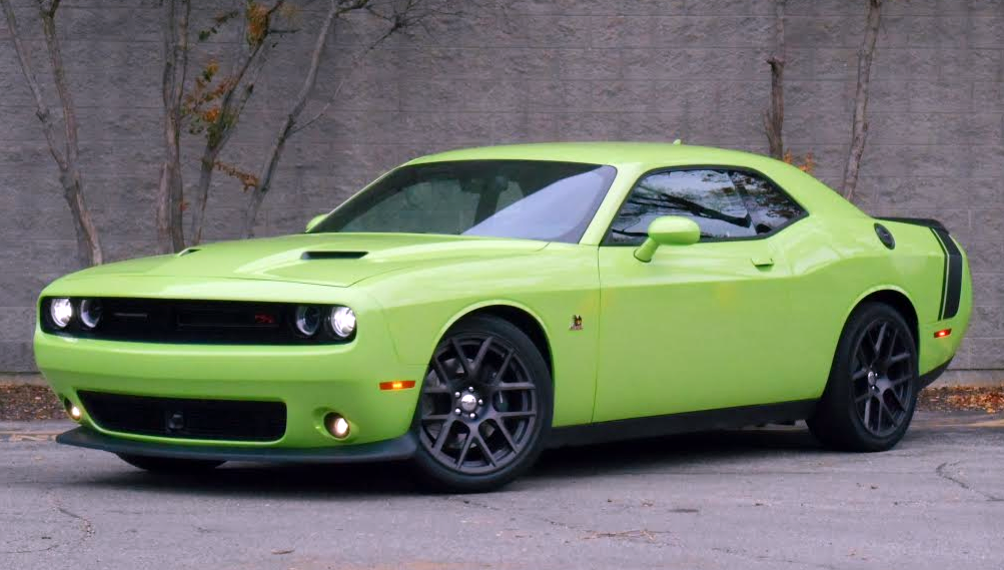 The great: Great bang for the buck, loads of power

The not so good: Typical high-performance-car thirst for fuel

If there’s a bargain muscle car lurking somewhere within the 2015 Dodge Challenger lineup, it must be the Scat Pack model. At its heart, it’s a Challenger R/T, but with the larger-displacement and considerably more powerful Hemi V8 from the SRT job that is the next step up the hairy Dodge coupe’s product ladder. 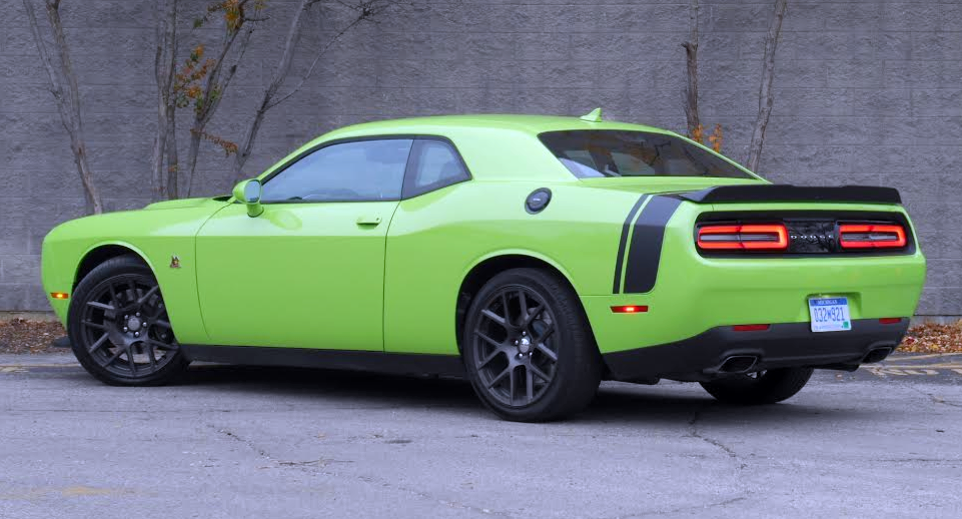 In place of the R/T’s standard 5.7-liter 375-horsepower Hemi, the Scat Pack runs with the 6.4-liter SRT mill that makes 485 horsepower and 475 pound-feet of torque. It does so at a savings of $7500, base price to base price, from the SRT. There are a few trade-offs. The extra dough buys the SRT customer a set of wider wheels and tires, an adaptive-damping sport suspension, an aluminum hood with a central air intake, a competition-style flat-bottom steering wheel on a power tilt/telescoping column, leather seats with Alcantara-suede inserts, and an 18-speaker Harmon-Kardon audio system. Some of these things are available as options—and the loaded R/T Scat Pack that Consumer Guide® tested cost nearly as much as an SRT—but at least the chance to forego them and pocket the difference exists. 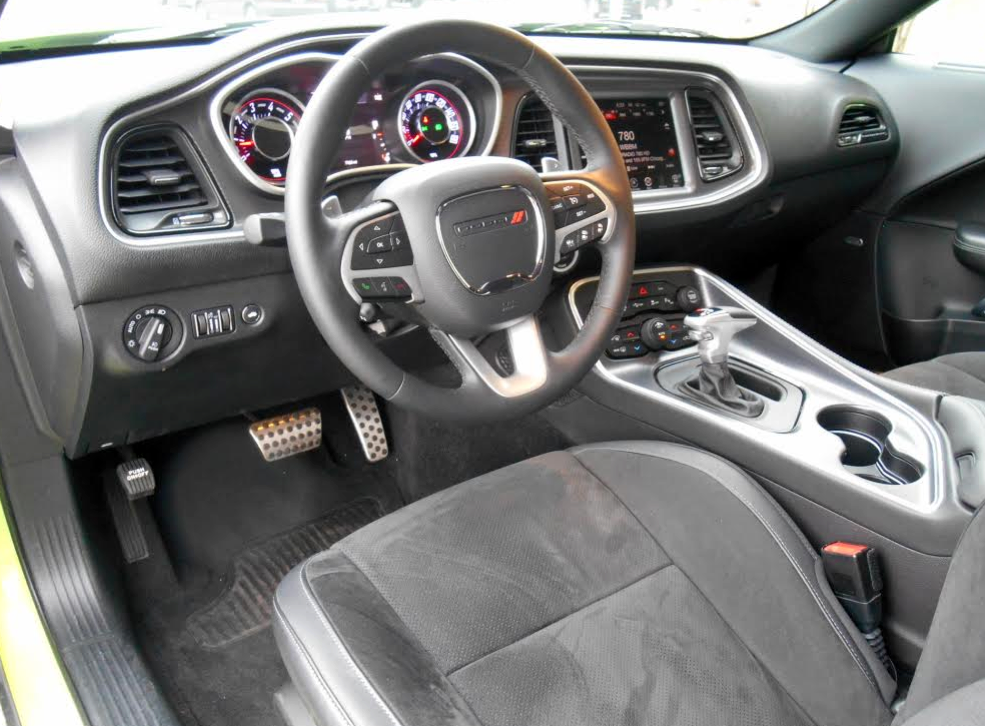 Challenger’s cabin is roomier than those in most sporty/performance coupes.

The 6.4 V8 is incredibly strong, and when it quickly finds its sweet spot—which arrives even before the metal-trimmed accelerator pedal reaches the floorboard—the Challenger Scat Pack rises up and bolts forward, giving passengers a good shove in the bargain. There’s a muscular rumble to the engine at start-up, and a bit of pleasing thunder when the gas pedal is tapped, but at steady speeds, either on the street or on the highway, the sound fades into the background. (This driver was able to mention to his official test heir how relatively quiet the Scat Pack was on the highway without having to shout.)

CG’s test car came with the particular version of the new 8-speed automatic transmission calibrated to handle the 5.7- and 6.4-liter engines. It’s not exactly “transparent” in operation—shifts are perceptible—but they’re not especially jerky. Neither are they badly timed. Switching into “Sport” mode holds gears for a few hundred more rpm before upshifting in order to provide more aggressive acceleration, and with the standard Performance Pages feature, you can punch up a launch-control feature for instant getaways with reduced risk of wheelspin. The automatic, a $1400 extra, also adds paddle shifters behind the steering wheel. This driver’s brief test of the paddles found them to be instant-acting.

The Scat Pack clearly is a performance car, not an economy car. EPA estimates for the 6.4/automatic powerteam are 15 mpg in city driving and 25 mpg on the highway. However, in a stint of 200.5 miles, 57 percent under city driving conditions, and all but about 25 miles in “normal” transmission mode, this driver averaged just 14.80 mpg. 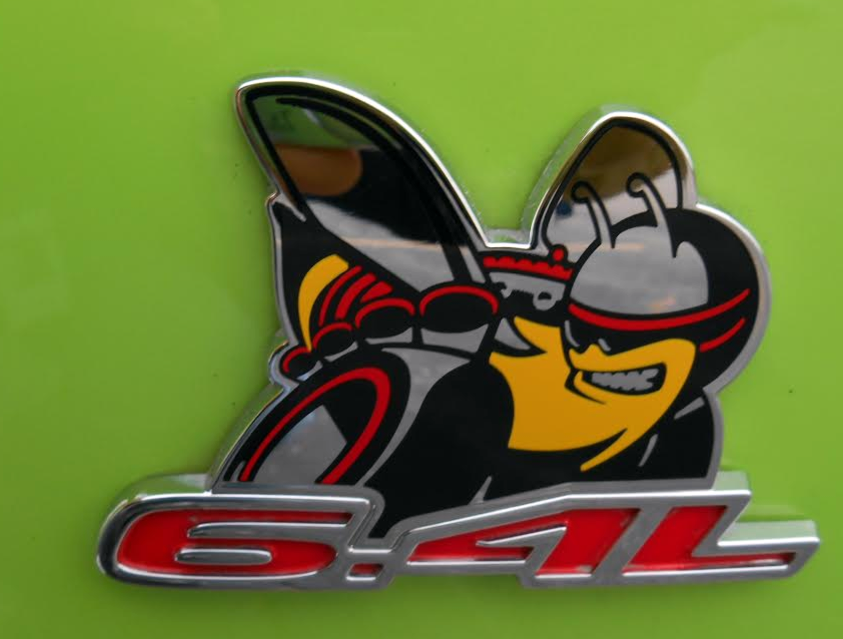 The Scat Pack name dates back to 1968, when it appeared as a marketing concept for Dodge’s performance car lineup.

Aside from changing the shift points, Sport mode also tightens up the new electric power steering. There’s nothing particularly bad about the responsiveness of the steering in its base state but its reduced resistance will be more welcome in normal driving situations. The weightier, more controlled Sport steering will serve well in aggressive driving but might get a little tedious cutting through city traffic or getting in and out of parking spaces. Dialing in Sport has no effect on the ride, which is firm. A rear-seat passenger reported that it can deliver a good jolt; from the driver’s seat, we found it free of unpleasant crashes.

As we’ve pointed out in previous Challenger tests, the back seat will hold a couple of adults without their begging for mercy—though it didn’t hurt that the ones this driver was hauling around were on the slight side. The forward-tracking front-passenger seat made entry and exit for rear passengers tolerably dignified but exiting from behind the driver’s seat was less so. The trunk welcomed a couple of overnight bags and some incidentals with room to spare.

From a base price of $37,495, our test car shot up to an as-delivered $46,165. There were 7 option groups attached to the tester, with prices ranging from $495 to $1995, and covering everything from the substantial to the superficial. (The priciest option was an appearance group with items like black-finish wheels, a black fuel-filler door, and a “bumblebee” stripe at the rear.) The Challenger R/T Scat Pack may not exactly be the “budget muscle car” of the storied Plymouth Road Runner/Dodge Coronet Super Bee days of the late ’60s, but it has at least screwed the cap off of that old formula and let it “breathe” once more.