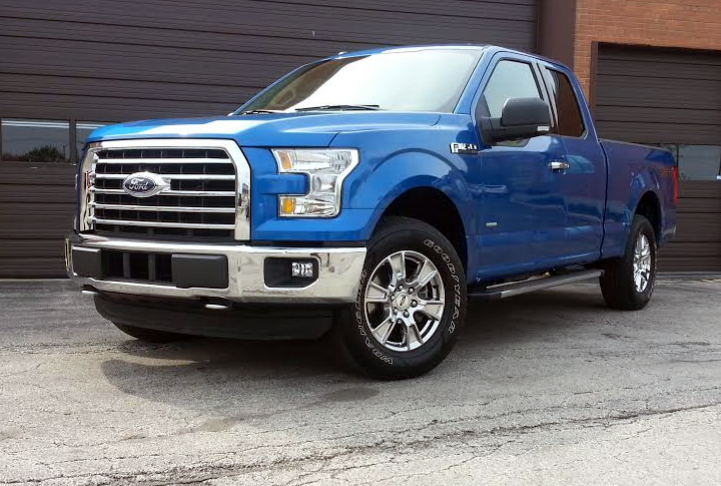 Consumer Guide’s test F-150 arrived in XLT trim with the optional 2.7-liter “EcoBoost” V6. Including the destination charge, our test truck came to $43,085.

The not so good: Pricey options, limited rear-seat passenger space

The 2015 Ford F-150 XLT pickup that Consumer Guide® got to test recently came nicely equipped with more than $6000 in options. However, there was one additional item that this driver would have liked to have seen installed: the moonroof. 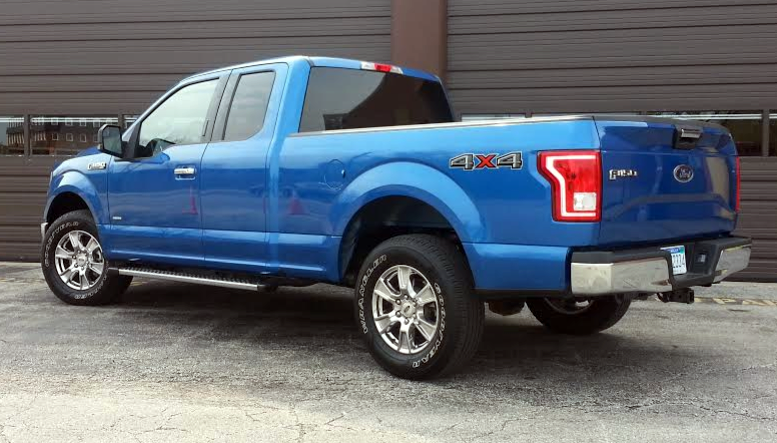 Much of the bright trim on our test truck comes as part of the $1695 Chrome Appearance Package.

He really wanted to find out if popping the top on an all-new F-150 makes that “puh-SHHH” sound other aluminum cans make when they’re opened.

This latest version of Ford’s seemingly never-ending success story (38 consecutive years as the best-selling truck in America so far) became instantly notable for abandoning steel body panels in favor of aluminum parts. This was done in a quest for improved fuel economy; depending on body type, a ’15 F-150 can weigh as much as 700 pounds less than its predecessor. But this test truck also came with another of Ford’s mpg-goosing tactics: an EcoBoost turbocharged V6. 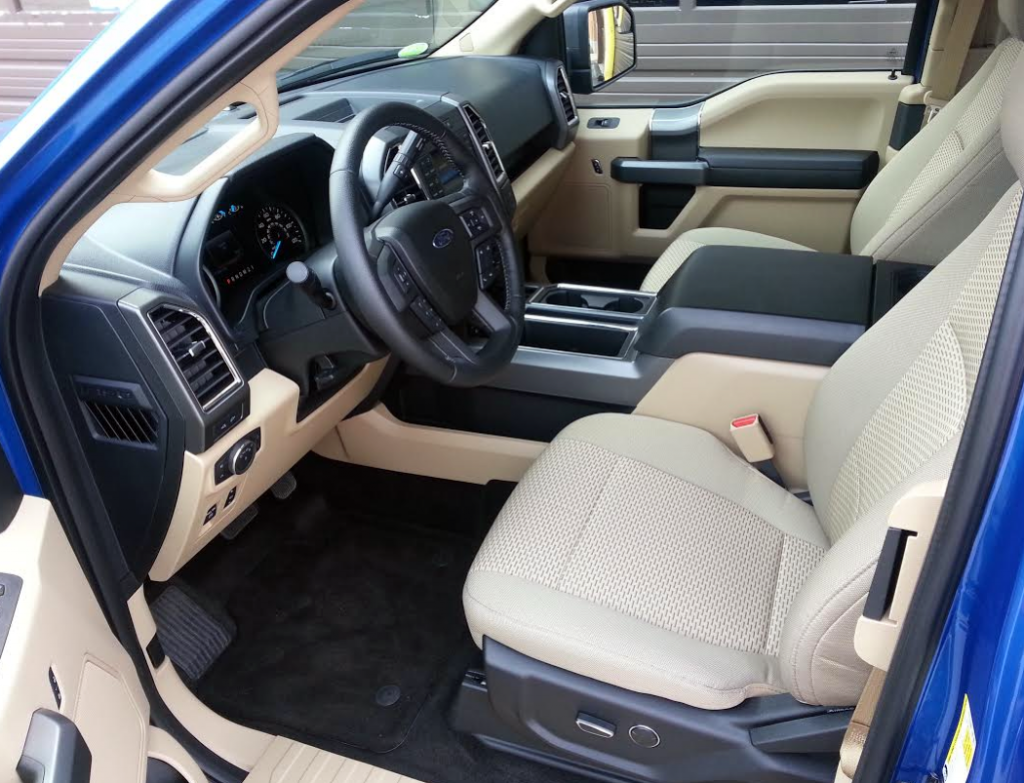 The XLT’s cabin is nicely appointed for a midline trim level.

The engine was the new 325-horsepower 2.7-liter job, a $795 upgrade from the standard naturally aspirated 282-horse 3.5-liter V-6. (A 3.5 Ecoboost V6 and 5.0-liter V-8 are also available for the F-150.) This wasn’t CG’s first exposure to the turbo 2.7 in an F-150. One powered the Lariat-trim CrewCab 4×4 that other of our editors drove early in the spring, and this latest example did nothing to contradict their good opinion of the powerplant and 6-speed automatic transmission. With the 2.7 the F-150 steps out smartly from a stop without much commotion from under the hood, and it merges and cruises with ease on the highway.

EPA mileage estimates for this powerteam are 18 mpg city/23 mpg highway/20 mpg combined. Judging strictly by the trip odometer, which showed a trip of 192.6 miles, this driver saw 23.20 mpg in the XLT SuperCab, with about 75 percent of miles in city-type driving. If true, that would be astounding. However, the truck was delivered showing 35 miles on the trip meter. Had the delivery driver topped off the tank near Consumer Guide® Supreme World Headquarters but forgot to reset, that would have meant a test run of more like 158 miles and 19.0 mpg—slightly better than, but still more compatible with, CG’s previous experience.

Ride in the SuperCab model is nicely composed. This driver felt almost no hop or crash from the unloaded rear while rolling on 18-inch all-terrain tires. For a full-size pickup it handles pretty well with nicely weighted steering, and brakes are good too.

Interior appointments in the F-150 XLT are hardy but not austere. Ours came with Medium Camel cloth seats that had an attractive pattern and some side bolstering for a bit of cosseting grip. Dash and door panels are a grained hard plastic but there are soft surfaces on door arm rests and the arm-rest lid of the console box. The driver enjoys a dead-pedal on the floor to rest his left foot. 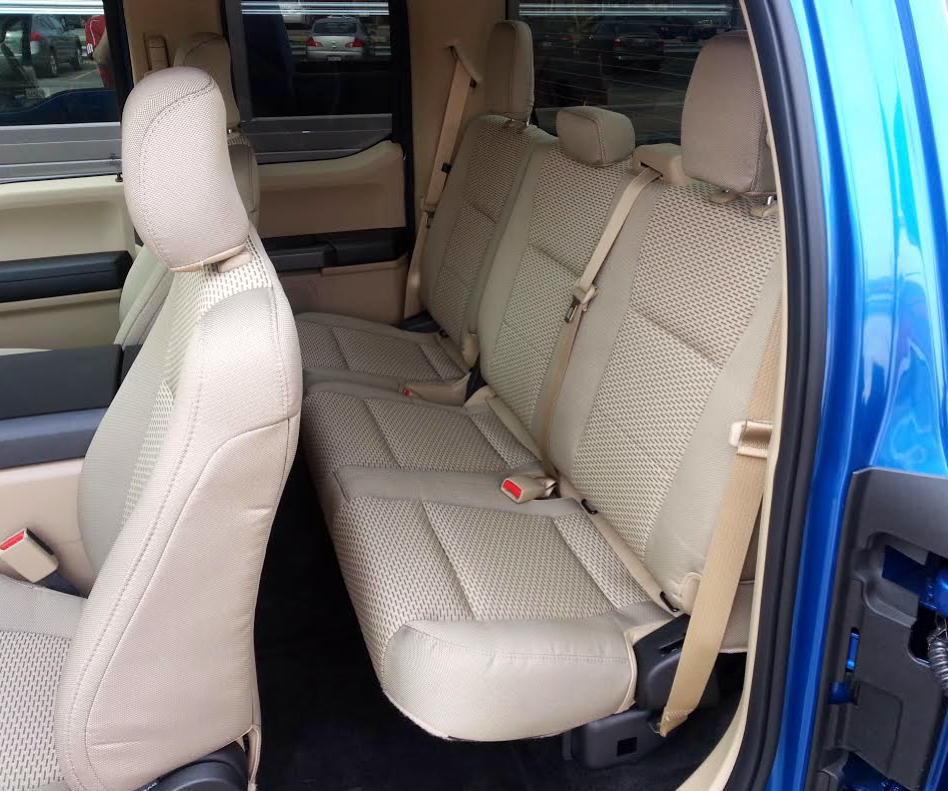 The Supercab rear seat isn’t meant for regular adult use. The rear-hinged rear doors open only when the front doors are open.

Regardless of cab configuration (the SuperCab comes with short rear-hinged rear doors that can’t be opened independently of the front doors), there is immense head room and good stretch-out room in front. The SuperCab’s rear seats are not as plush as those in front, partly because of a somewhat upright backrest. Neither are they very spacious. If someone my size were to sit behind me, the rear passenger would be perched with knees up and pressed into the seat back, so 2nd-row seating for adults is quite limited.

Rear seat backs fold in a 60/40 split, and the cushion easily folds up, thanks to underseat flipper releases, to create in-cabin cargo space if needed. Unlike the earlier Lariat, the XLT test truck included optional two-passenger front seating divided by a deep and wide console box with an adjustable tray. There are big divided door pockets in front but smaller pockets in the short rear doors.

Interior quiet is good enough to make you forget it’s a full-size truck at times. Visibility benefits from lots of glass area and large mirrors with wide-angle insets. The XLT came with a more basic audio system than the test Lariat. It was a snap to program and use with the help of buttons around the 4.2-inch touchscreen. 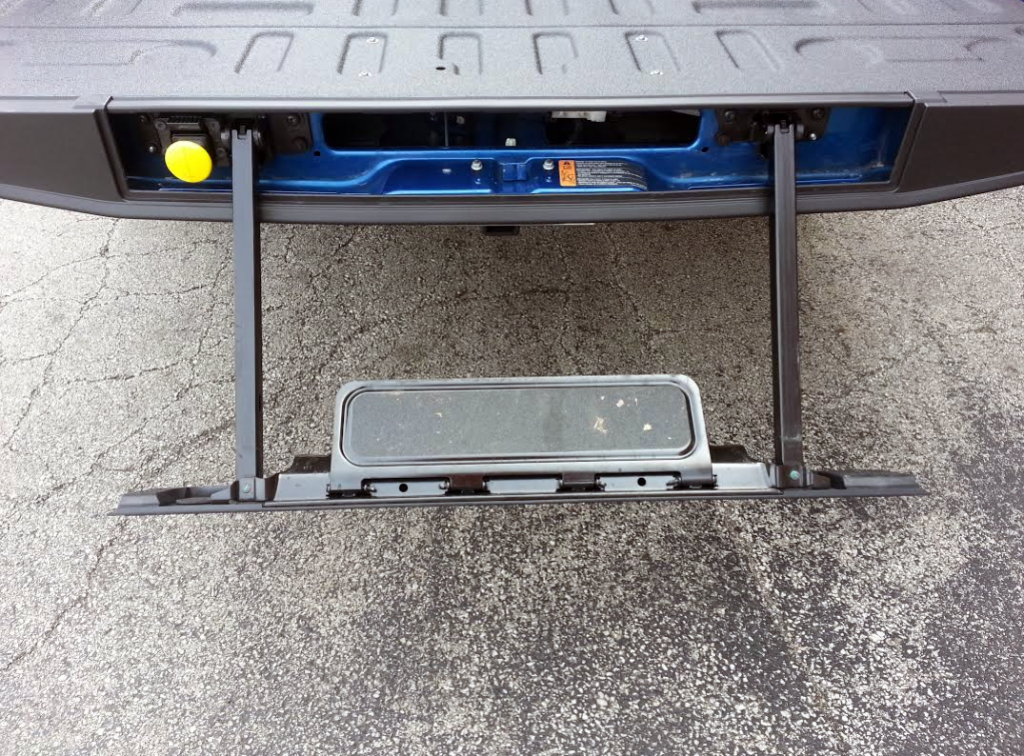 The handy tailgate step is a $375 option.