The great: Combination of power and fuel economy, and ride and handling

The not so good: Top-up rear-corner visibility, climate controls, rear-seat room and access

We’ve tested a number of Mustangs since the car’s redesign for 2015, but this is the first drop-top. It came equipped with the 2.3-liter EcoBoost 4-cylinder engine and automatic transmission, a combination we’ve enjoyed in the past – and did again. Aside from some very slight lag in full-throttle take-offs*, this powertrain suits the sporty mission of the Mustang quite well while delivering very respectable fuel economy, which averaged exactly 30.0 mpg in about 85 percent highway driving in my test.

Top-up visibility isn’t good to the back corners, which made us appreciate both the rearview camera and optional $295 rear-obstacle detection.

What’s normally sacrificed in convertibles is some structural rigidity, some rear-seat space, some cargo room, some visibility, some quietness … and some money. That last one was thus expected, but not quite to this degree; our screaming yellow tester bottom-lined at just under $42,000, though that was with a load of options (many of which you could probably do without) that tacked $6345 onto its base price of $34,800. This amount is only a lot if compared to the excellent Mazda MX-5 Miata, which gives up a rear seat, quite a bit of trunk space, some ride comfort, and a little bit of straight-line performance for the savings.

Cowl shake is one of those things you notice more at first than you do after spending some time behind the wheel. It’s mostly evident over smaller bumps as a vibration in the inside rearview mirror, something you perhaps get used after awhile and your brain eventually ignores. (Larger bumps tend to move the whole car, which masks the “quiver” somewhat.) You wouldn’t think the top would add much structural rigidity, but I only noticed the shake with it down, and then only at first or if I was specifically watching for it. So it didn’t strike me as an issue. 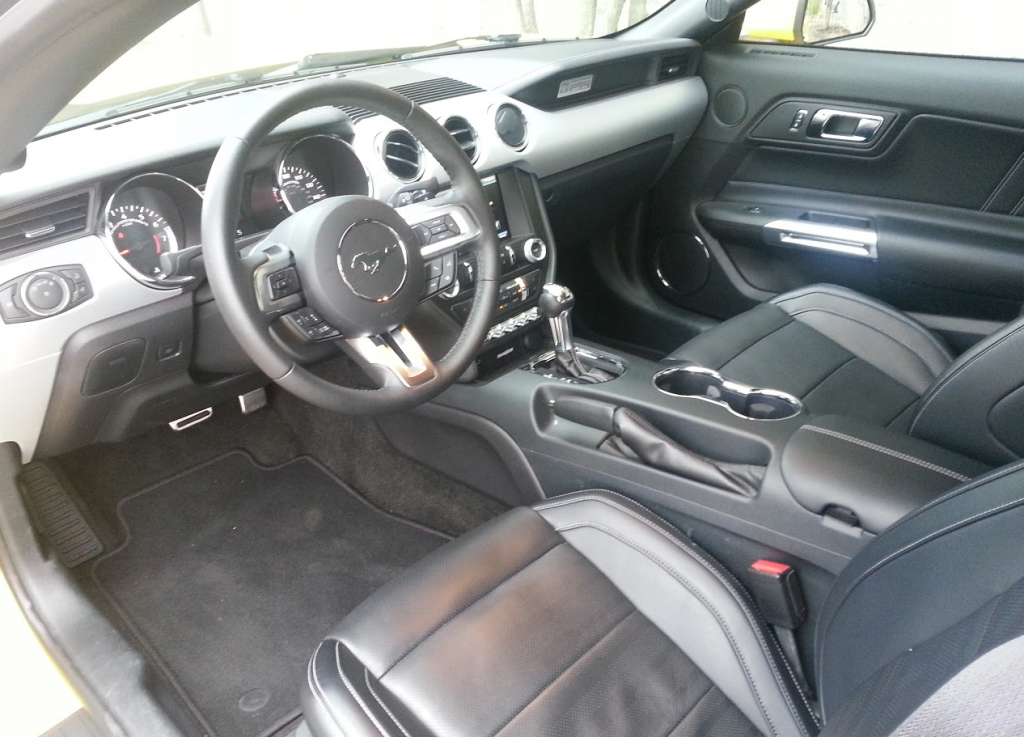 It wasn’t as vibrant-looking as the outside, but the interior was nicely trimmed with numerous padded surfaces.

Can’t say that about rear-seat room, however. First, it’s really awkward to get back there, primarily because the front-seat shoulder belt bisects the opening and can’t be easily moved out of the way. Furthermore, my 5’9 frame could barely fit behind my front-seat setting – and even then, it was really hard to get my feet in and out – and two is the maximum in back, with adults sitting shoulder-to-shoulder. An annoyance was that the driver-side seat back didn’t return to its pre-set position, capping off a procedure that was kind of tedious to begin with. On the bright side, really tall drivers will have less of an issue, as they’ll find sufficient room, and nobody would even think of trying to squeeze in behind them.

As convertibles go, trunk space is a plus, with plenty of room for a weekend’s worth of luggage.

Then there’s visibility. Top down, it’s great; top up … not so much. The rear corners are essentially blind, so you really have to be careful when backing, something made easier (or at least safer) with the rearview camera and optional rear-obstacle detection.

More impressive was noise control. Top up, it didn’t seem much noisier than the coupe, and even top down, there was little wind buffeting or evident noise until you got to upper highway speeds. And speaking of highway speeds, that’s where opting for the $1195 adaptive cruise control will quickly seem like a great idea.

Even more impressive than that was top speed … or should I say, the speed of the top. Closed to open took only about 12 seconds (a little more in the reverse direction), so that should never be an excuse for not enjoying an open-air ride.

It took but 12 seconds to lower the Mustang’s power top, and wind noise and buffeting were fairly low when you did, even at freeway speeds.

But because that open-air ride is going to expose you to the ambient temperature, you will likely be fiddling with the temperature controls more than in a closed car. And those could certainly be handier to use, particularly if you’re bouncing down a rougher road. Temperature is adjusted with a vertical wheel, which isn’t as exacting to use as a rotary knob. Worse is that fan speed and mode are controlled by repetitive-step pushbuttons, which are really tedious to adjust – particularly if your finger is bouncing. Some audio controls were a bit tough to hit as well, especially the thin bars at the corners that direct you to entertainment, phone, etc.

For wind-in-the-hair fans (of which I am one), there aren’t a lot of choices at sub-$40,000 prices. If you want a back seat (no matter how skimpy) and a decent-side trunk, the Miata is out. That makes the Mustang one of the few contenders to be considered, and despite some faults, it certainly should be. 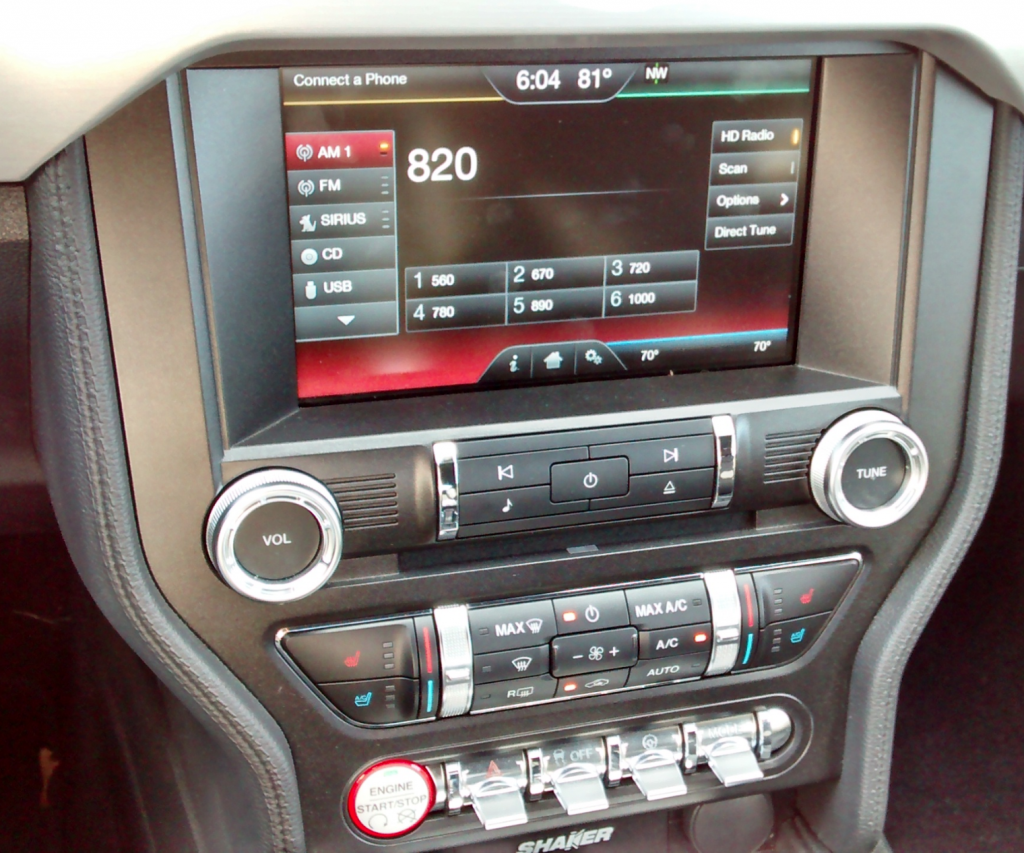 Once in the right screen, the audio system is simple enough to use. But the climate controls are tedious to adjust — something you have to do more often in a convertible.

* Turn off the traction control and brake-torque the engine, and you can turn the rear tires into spinning rings of smoking rubber … at least on glass-smooth asphalt roads such as found down at my farm. Or so I’ve been told.