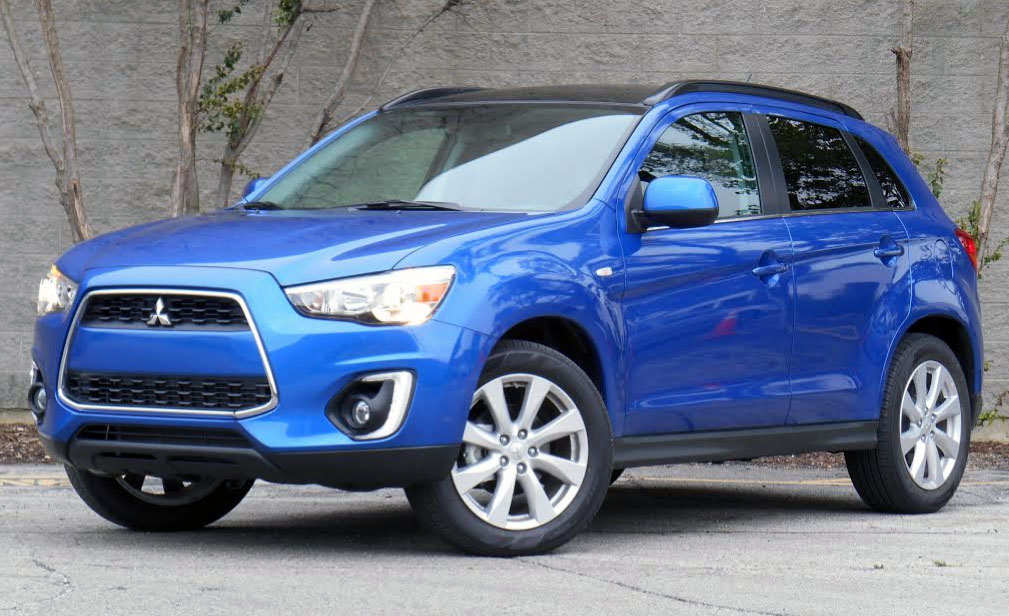 They are alike in name and wheelbase, but Mitsubishi’s 2 Outlander compact crossover sport-utility vehicles are decidedly different from one another. Appearance, powerteams, most dimensions, and vehicle behavior are all distinct—and we know whereof we speak considering that Consumer Guide® had a 2014 V6 Outlander GT at its disposal for a year as a long-term test vehicle. Now, though, we’ve had the chance to give the smaller 2015 Outlander Sport a try. 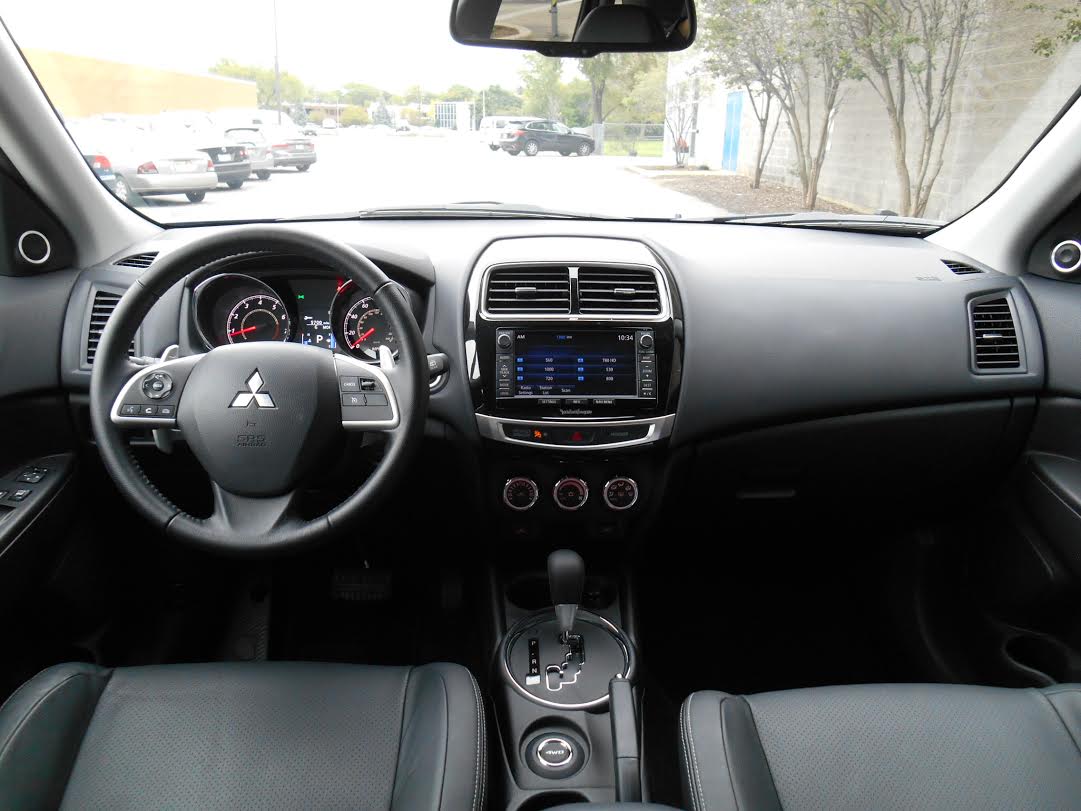 Outlander Sport’s cabin is roomy up front, but materials quality trails most vehicles in the segment.

This tester found the Sport to be a pleasant-riding, easy-handling, and lively driver. Rear cargo room is surprisingly good, fuel mileage is just OK for a 4-cylinder sport-ute with all-wheel drive (or “all-wheel control” as Mitsubishi calls it), but 2nd-row room and comfort aren’t all that great.

Though both types of Outlanders have a 105.1-inch wheelbase, the Sport is 14.2 inches shorter end to end, 1.6 inches narrower, and 1.9 inches lower. Thus, Mitsubishi believes the Sport can get by with a 2.0-liter dohc 4-cylinder engine, where the “senior” Outlander has a larger-displacement 4 or the V6 at its disposal. Three of the 4 Outlander Sport varieties come standard with a continuously variable transmission (CVT) that behaves like an automatic; only the low-line front-drive ES comes with a manual transmission. In all applications, the 2.0-liter engine makes 148 horsepower at 6000 rpm and 145 pound-feet of torque at 4200 rpm.

In our test Sport, a top-line all-wheel-drive SE, the power delivery was fairly quick—not always the case when a CVT is in the house. If the vehicle lagged anywhere, it was in midrange acceleration on the expressway, but never dangerously so. The Sportronic CVT has steering-wheel paddle shifters for those who want more personal control of trans behavior. EPA fuel-economy ratings are 24 mpg city, 30 mpg highway, and 27 mpg in combined driving. In my 161.9-mile run, the Outlander Sport got 24.65 mpg, but that was with 60 percent city-style driving.

Check in on our long-term Mitsubishi Outlander GT

Of the 2 types of Outlander, this tester thought ride and handling were better in the Sport. On the highway, it stepped smartly over surface imperfections without nosediving or wagging side-to-side. Steering was responsive and braking was good, too, though pedal travel may have been a little long.

Inside, the Outlanders have different instrument panels and surfaces. Sports, which come in fewer trim levels, aren’t quite as dolled-up as their bigger relatives. (For instance, no woodgrain trim like on the V6 GT.) There’s plenty of hard plastic to go around and the optional leather seat trim isn’t going to make anyone forget their last ride in an Audi. Still, speedometer and tachometer dials, the digital vehicle-information display, and the navigation/audio screen (in this case the optional 7-incher) were easy to see. Climate controls were easy to use. 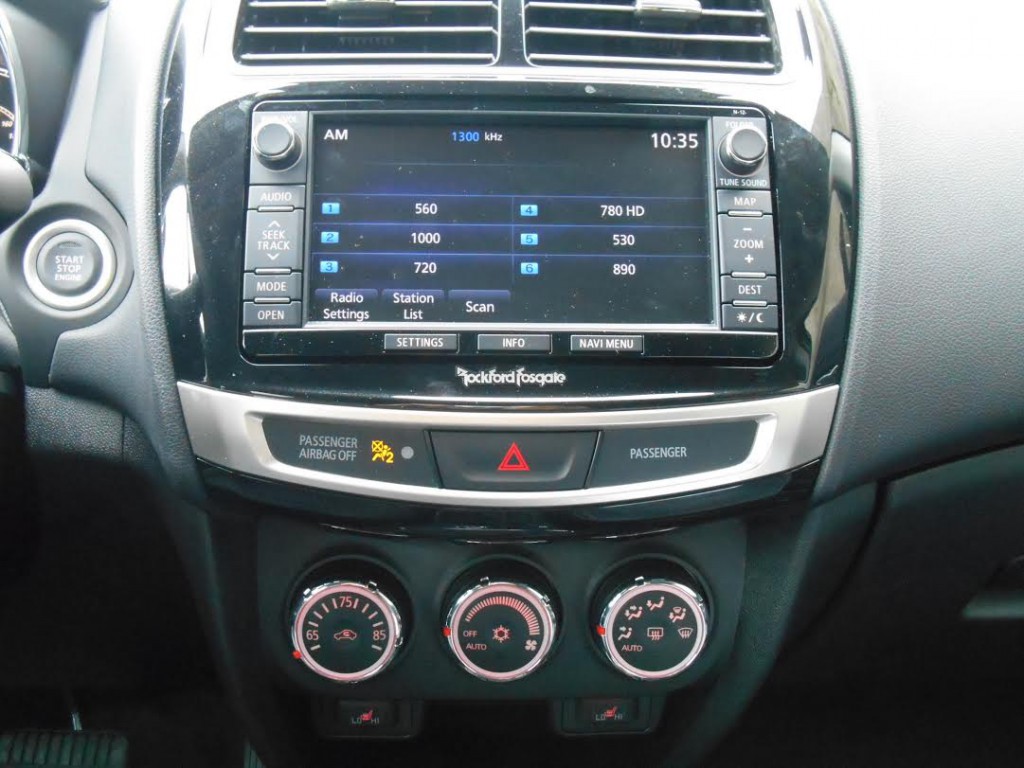 Outlander’s touch-sreen controls complicate simple functions. We applaud the use of a rotary knob for radio tuning, but bemoan the multiple steps required to flip between AM and FM frequencies.

Front seats offer average support. They’re comfortable enough, with good leg and head room. Front doors have pockets with bottle holders, plus there’s an acceptably large glove box; a deep but not long covered console box with tray and USB/power plug-ins; and 3 cup holders in the console, including one in front of the shift lever.

It’s 2nd-row accommodations that are tight in the Sport—considerably more so than in the bigger 3-row Outlander. Seats are fairly upright and not as padded as those in front. Leg room is limited—the lanky will no doubt feel constrained—and door openings are narrow at the bottom, so it isn’t easy to swing feet out when exiting. There are no storage pockets in the rear doors, and just one storage pouch, that on the back of the driver’s seat. A pull-down center arm rest with 2 cup holders is the rare creature comfort in back.

Looking at the truncated shape of Outlander Sport from the outside you’d never guess that it has as much rear cargo space as it does—enough for a family’s groceries, kids’ sporting gear, or weekend getaway luggage. The floor is wide and flat, with tie-downs built into the sides. Plus, there’s lots more space available when flipping the 60/40 2nd-row seats, which fold almost flat with no gaps between the seats and the load floor.

The all-wheel-drive SE that CG tested started at a believable $24,195. Key features that come at that price include color-keyed bumpers, mirrors, and door handles; 18-inch alloy wheels; heated mirrors and front seats; automatic air conditioning; a tilt-and-telescoping steering column with a leather-wrapped wheel; satellite radio; Bluetooth connectivity; and rearview camera. Options on the SE are confined to a trio of packages, and our test vehicle had the biggest—and costliest—one, the $4900 Touring Package. It adds a navigation system and the 7-inch screen to the leather upholstery, 710-watt Rockford-Fosgate stereo system, autodimming rearview mirror, power driver’s seat, black roof rails, and long panoramic sunroof that are available in one combination or another in the other packages. That brought the total, with delivery, to $29,945.

Another goodie that the Outlander Sport comes with is a generous warranty: 5 years/60,000 miles on the vehicle overall and 10 years/100,000 miles limited on the powertrain. OK, so that’s one other thing that the Sport has in common with the “big” Outlander. . . .

The Outlander Sport is, by itself, a study in contrasts. Dynamically, the Sport disappoints by way of its limited power and erratic transmission behavior, yet, ride quality approaches best in class, and handling borders on sporty. 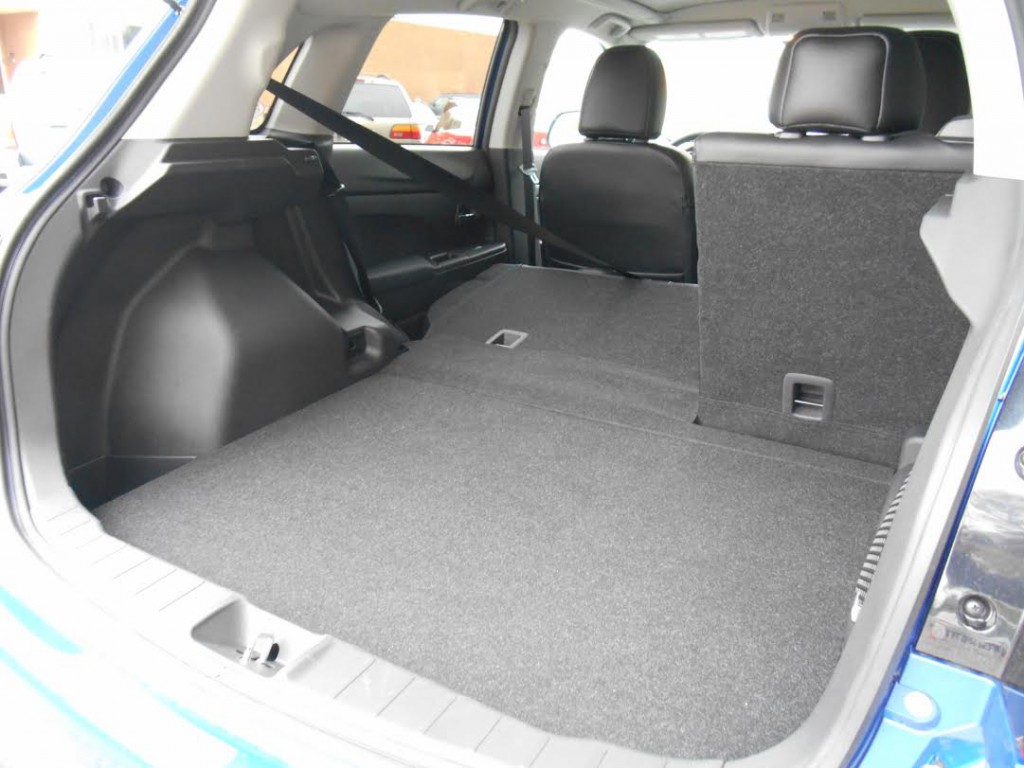 Despite its tidy exterior dimensions, Outlander Sport boasts a generous amount of space behind the 2nd-row seats.

Inside, the confounding navigation and audio controls and disappointing cabin materials are offset by a surprisingly spacious front seat area and excellent outward visibility.

Despite finding our test car a worthy commuter-traffic warrior, at $30,000 it strikes me as expensive. The $4900 Touring Package is part of the problem. Not only does that tariff bring with it the less-than-tractable navigation system, it elevates expectations of this compact Mitsubishi that it just can’t deliver on. Any number of competitors offer more refinement and similar content for that kind of money.

At more modest price points, the Outlander Sport works as a fun and sporty commuter car with excellent forward accommodations and acceptable adult space in back. At about 26 mpg, it’s reasonably frugal, as well.

With its $30,000 sticker, I’ll agree that our loaded test Outlander Sport SE seemed a bit out of its price league. But that isn’t the best way to order one. The base AWD ES starts at $24,000 with destination, and it includes a nice complement of equipment — probably all most buyers need. And assuming it’s otherwise like our tester, it also includes a surprisingly compliant ride (with just a bit of hobby-horsing over swells), nimble handling, and easy parking. Also a lot more cargo room that you might expect of such a short vehicle, aided by a flat-folding 2nd-row seat, a flat-folding front passenger seat, and a bit of under-floor storage in back. There’s also decent interior storage and good all-around visibility. Passenger room is adequate as long as those in back aren’t behind someone tall, though egress from the rear is a bit tight.

Although I agree with Tom that interior materials aren’t a high point, the soft dash face, thinly padded door tops, and bright plastic trim are in line with a $24,000 price point — though not a $30,000 one. Furthermore, my 275 miles of 85% highway driving were covered averaging 30.3 mpg, impressive for an AWD vehicle of any stripe, and actually slightly topping the EPA highway figure. Come winter, I might appreciate the Outlander Sport’s AWD “Lock” mode when the white stuff falls.

I’ll also side with Tom on engine noise, which is noticeably raucous, but only under acceleration, which is adequate if no more. Our tester’s optional Touring Package not only added a stiff $4900, but also a navigation system and accompanying audio system that is cumbersome to use; I suspect the base unit is easier to operate. But everything considered–including Mitsubishi’s unheralded warranty (which matches Hyundai’s and Kia’s for best in the industry), a more reasonably equipped Outlander Sport makes a lot of sense, particularly for someone using it in an urban environment where parking space is at a premium.