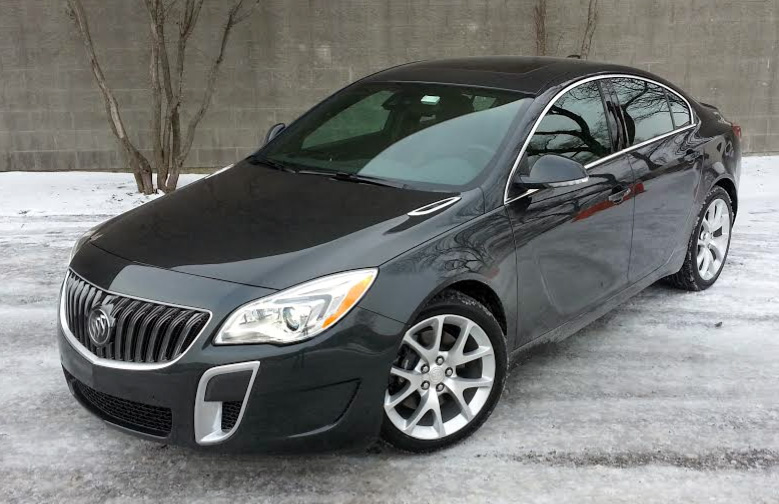 The not so good: Limited rear-seat space,

For 2015, Buick is trying to get the known quantity that is its Regal premium mid-size sedan to connect with more buyers by adding, well, connectivity. This is the year that the OnStar communications system with new 4G LTE capability turns a Regal into a Wi-Fi hotspot. Meanwhile, the IntelliLink infotainment system now includes text-messaging alerts and, for Apple iPhone users, Siri Eyes Free functionality. 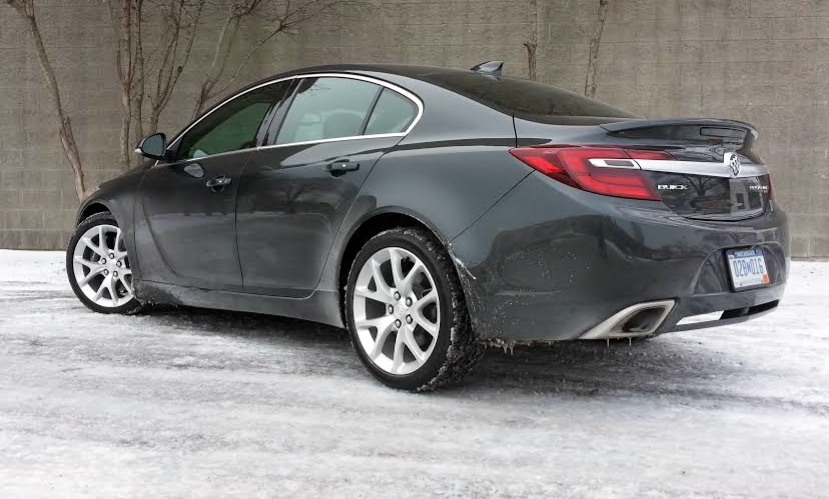 A rear spoiler and 19-inch wheels are standard on GS models.

Even if you’re more “Tech? No!” than techno, you might find the Regal an engaging drive, albeit one with a few shortcomings.

Consumer Guide® sampled the car intended to be the sportiest of the Regals, the GS. That distinction turns on a few styling alterations, chassis specifications, and interior features. The engine is the same 259-horsepower 2.0-liter turbocharged 4-cylinder available at all other trim levels, and CG’s tester came with the 6-speed automatic transmission that is offered throughout the line—though a 6-speed manual is an option for GS owners alone. 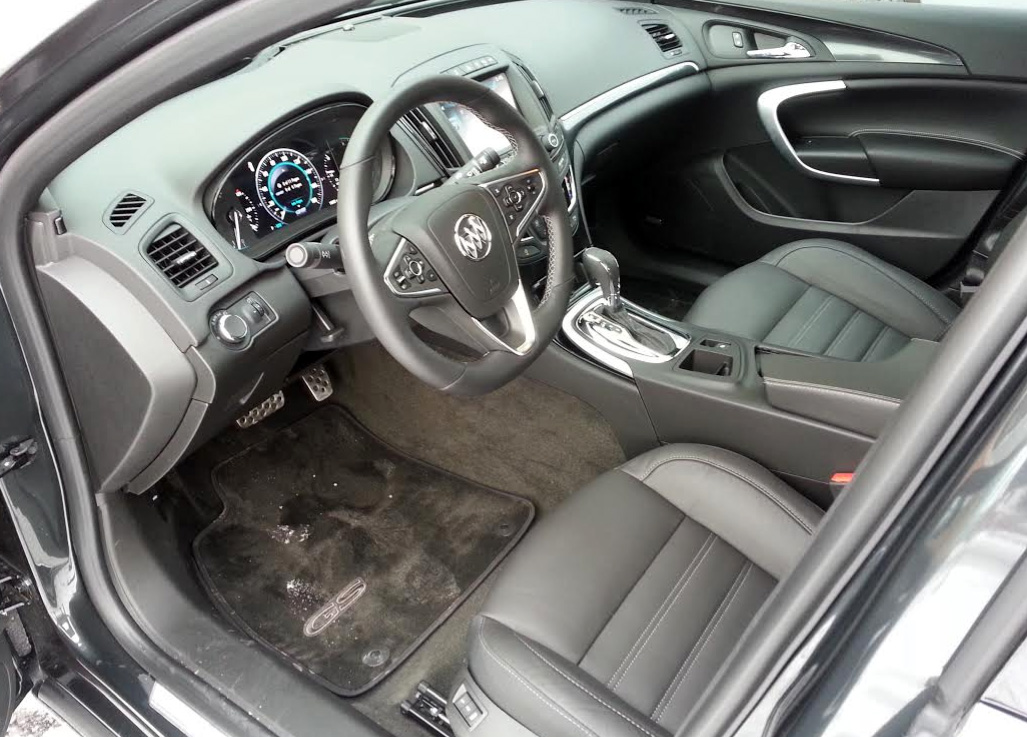 Despite a few use of hard-plastic bits, Regal’s cabin looks and feels upscale.

The test car was also equipped with all-wheel drive, which gave it a starting price of $39,810–the highest among the Regal clan, and $2425 more than a front-wheel-drive GS. In this driver’s case, it was a timely thing to have, considering that the day he got the car there was a persistent snowfall during the evening rush hour through which no one rushed. There were a couple slight wiggles on the mushy pavement, but overall the all-wheel Regal coped extremely well.

The engine did a nice job of masking the turbocharger’s presence, making possible lively standing starts and a brisk cruising pace (when the roads were cleared) without appreciable lag before the “blower” kicked in. It also was ready to go promptly after sitting out on some cold nights. Less heartwarming was the appetite for fuel, however. EPA estimates for the turbo mill in AWD-equipped Regals are 19 mpg city and 27 highway, but this driver saw just 16.97 mpg after a 136.9-mile stint with 75 percent of those miles under city conditions.

With the GS-standard 19-inch tires and wheels (20-inchers are available), ride quality was pleasantly firm, but never harsh. This tester kept the GS-exclusive Interactive Drive Control in the base setting, but the system allows for push-button selection of Sport or GS modes that change suspension settings and steering sensitivity, and calls into play continuously variable real-time damping. Braking was swift and sure. Among the features specific to the GS are Brembo front discs. 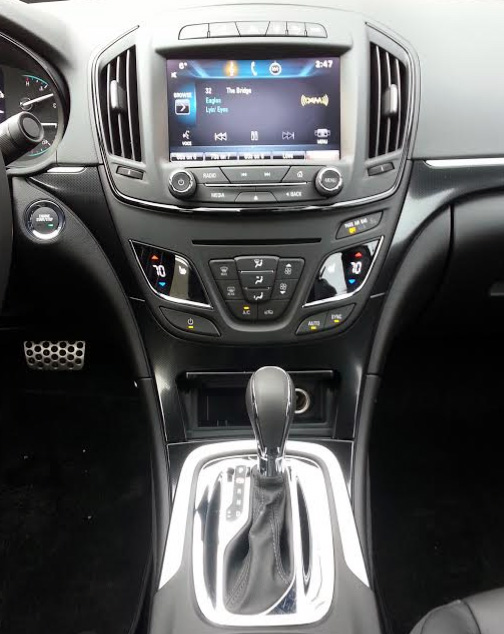 Regal’s audio and climate functions operate via the touchscreen and/or traditional buttons, mostly to good effect.

Another GS exclusive is the 8-inch electronic driver-information display in the instrument cluster. Bright, clear, and configurable, it includes a digital speed readout. It also includes a warning that beeps when the speed limit is exceeded—which you may or may not like.

Available for all Regals, IntelliLink is standard on the GS, and manifests itself on an 8-inch touchscreen in the center of the instrument panel. For the touchscreen-averse, there are buttons for the dual-zone climate-control system on the center stack, but temperature and seat-heat selections are made through capacitive touch controls that don’t seem that sensitive or responsive, and take more effort (and attention) than a button or dial would. Audio and navigation functions work through the screen. I didn’t have any trouble using voice commands to summon radio stations to save as presets. Stored stations register on a band along the bottom of the screen, and the screen’s smartphonelike swipe feature was generally useful to access station presets, though once in a while it resisted efforts to do so.

Though there is hard plastic on the bottom half of the dash and lower reaches of the doors, the overall look and feel of the interior is rich and well assembled. It’s commendably quiet, too. There’s plenty of soft-touch material in the places occupants are most likely to be touching the car, and metallic accents throughout—including the pedal faces—brighten the appearance. The GS has its own style of leather seats highlighted by exposed stitching. They would be comfy for long runs but need more side support for more-aggressive drives. The front seats and leather-wrapped steering wheel are heated.

Front passengers enjoy good room and 8-way power-adjustable seats to help them settle in. While rear seat cushions are cushy, the seat backs are a bit upright and leg room is not the most generous we’ve seen in a mid-size car. Neither is head room especially abundant. This 5-10½ tester had a little extra space, but 6-footers will find themselves pushing the limits. Plus, a big driveline hump confines the rear seat to 2 passengers. Thick B-pillars are a blot on what’s otherwise pretty good visibility. 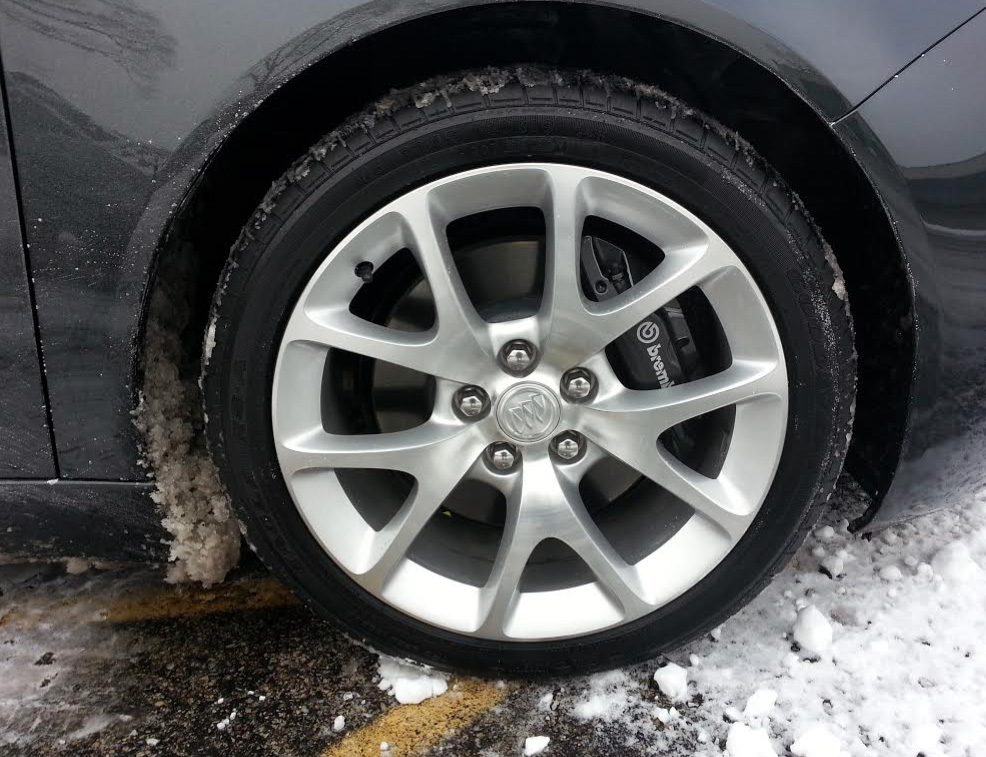 Brembo-brand brake calipers can be seen through the wheel spokes.

Front interior cargo spaces include a not-half-bad glove box, a generous cubby under the arm rest unencumbered by device plug-ins, two covered cup holders in the console, and door pockets. Rear passengers have smaller door pockets, front seat-back pouches, and a pull-down center arm rest with 2 cup holders and a shallow but wide covered storage space. A 120-volt outlet in the back of the console is available for running and charging electrically powered devices that will be making use of that built-in Wi-Fi.

The Regal has really good trunk space, though structural features intrude a little at the back between the wheel houses and disrupt the flat floor. Rear 60/40 seats fold very nearly flat, and with a smooth transition from the trunk floor. However, a bulkhead behind the seats narrows somewhat, so loading longer objects might be limited.