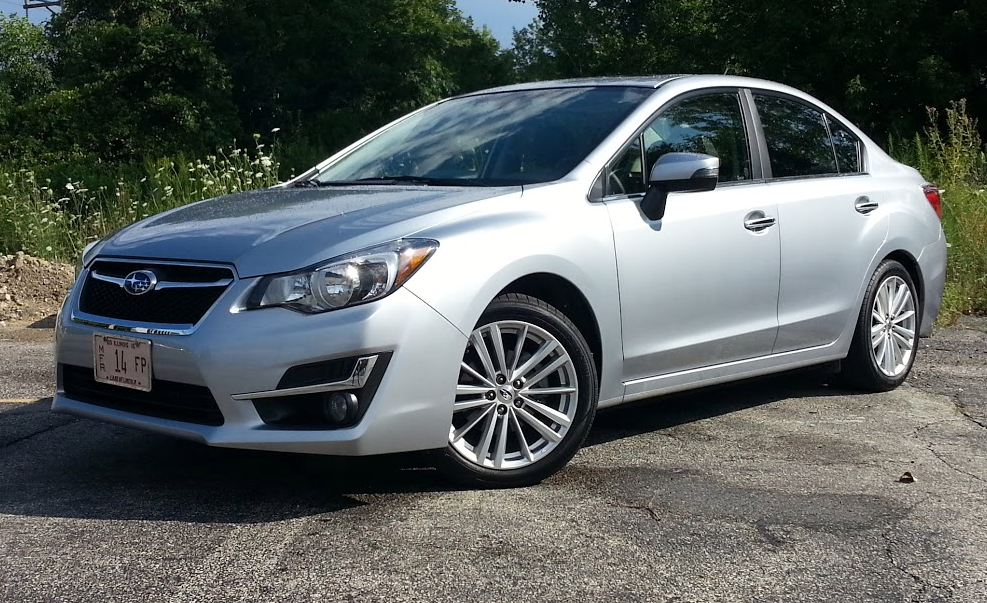 Consumer Guide’s test 2015 Subaru Impreza arrived in 2.0i Limited trim. Including the destination charge, our test car came to $25,885.

The not so good: Noisy engine, no surplus of power 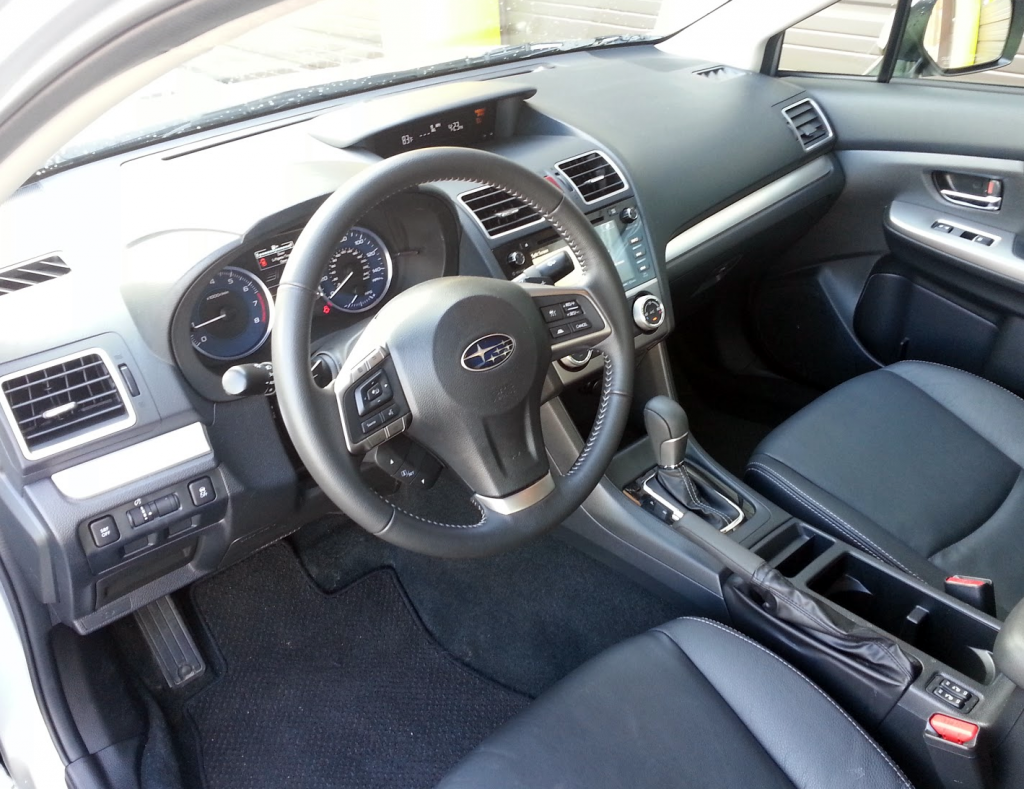 Impreza’s cabin is nicely appointed, but most competitors have gone upscale in recent years, and feel more luxurious.

For a compact 4-door sedan, especially one that comes with standard all-wheel drive, the Suburu Impreza 2.0i Limited does pretty well for itself to come in at around $23,000 delivered. The Impreza Limited buyer gets heated leather seats, automatic climate control, an infotainment system that displays on a 7-inch screen, and satellite radio. There’s good passenger room, and trunk space isn’t bad, either.

However, lest a shopper get the idea that this Impreza is a complete steal, there are some caveats. The powerteam is nothing to crow about, and, despite some of the aforementioned cabin amenities, the interior isn’t overly luxurious to the hand or to the eye.

Under the hood is a 2.0-liter 148-horsepower “boxer” engine that’s linked to a continuously variable transmission. This pairing is no blinding flash—hitting its stride for passing requires a short wait—and the engine isn’t the quietest device.

Aside from the previously mentioned leather seats with contrast stitching, there is some spongy material on the dash top, and a little “give” to the surfaces covering all the doors. Soft material is found on the arm rests and door centers, too. Still, there are large stretches of hard plastic around the cabin, and overall appearance is fairly monotone.

Personal-storage options are a mixed bag. The glove box is pretty well filled by the owner’s manual, and there’s a smallish console cubby with USB, auxiliary-jack, and power-point plug-ins. Two open cup holders are in the console, and there’s an open bin ahead of shifter. Front doors have large pockets with bottle holders. Rear storage consists of a single pouch (on the back of the front passenger seat), a pair of cup holders in the pull-down center arm rest, and doors pockets just big enough for bottles. 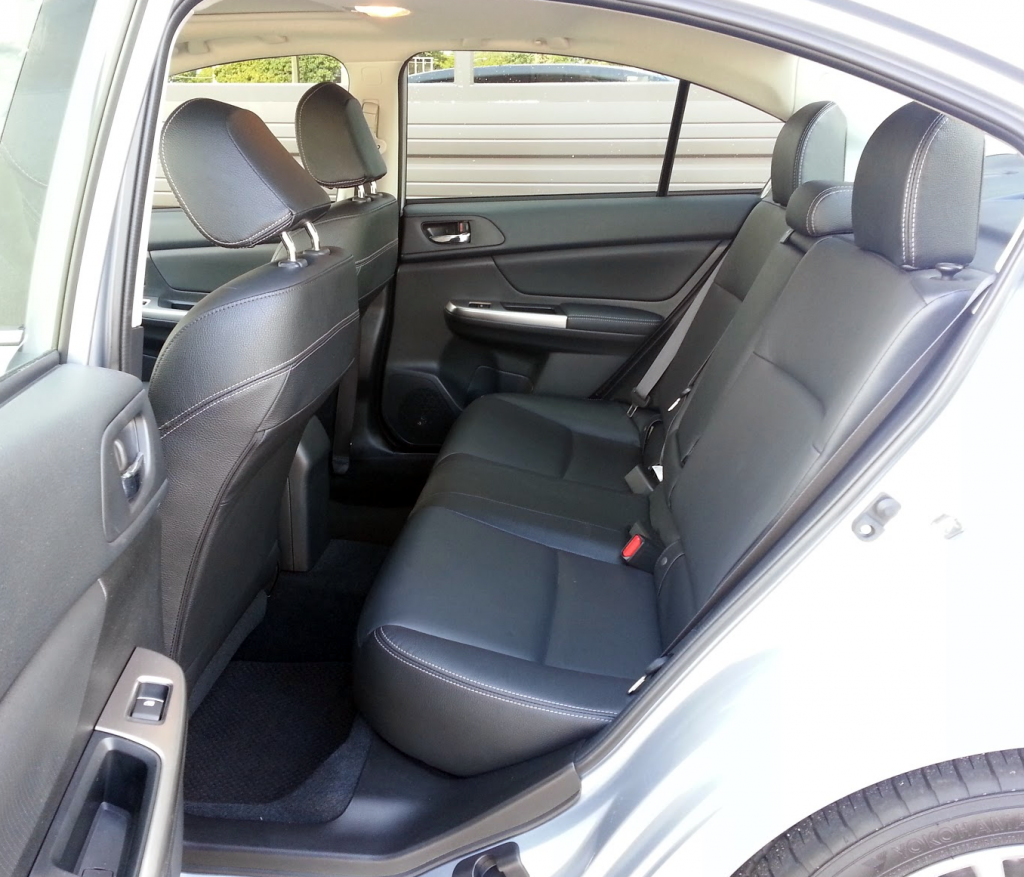 IImpreza’s rear-seat space is better than average for its class.

To the good are comfortable seating and ample-for-the-class leg and head room all around. Instruments show up well. Climate controls rely on easy-to-set dials. Radio presets were programmed easily. The touchscreen has a small stack of easily reached buttons on either side to summon functions. Apps on the standard Starlink multimedia system that display weather information, sports headlines, etc., arrive promptly to the touch, but still draw attention from the road.

Trunk space is pretty good for a compact sedan, and the opening is wide, but the flocked panel that covers the floor is a little flimsy. Rear seats fold in a 60/40 split for additional cargo room. When down, they sit flat, but at a slight rise over the level of the trunk floor. At least the transition from the trunk to the seat backs is uninterrupted.

Ride quality is one of the Impreza’s better attributes. This driver found it sensitive enough to comfortably manage most road-surface imperfections but without turning sloppy and wallowing. While not knife-blade sharp, handling was still good.

The car that Consumer Guide® editors drove didn’t stop at the standard-equipment list. The final tally came to $25,885 with the addition of a $2795 option package that added a power moonroof, keyless access and push-button starting, voice-activated GPS navigation system (that also brings traffic and weather notifications), and the “EyeSight” system. This last item is a suite of safety technologies including precollision braking, adaptive cruise control, lane-departure and lane-sway warnings, and a precollision throttle-management system. 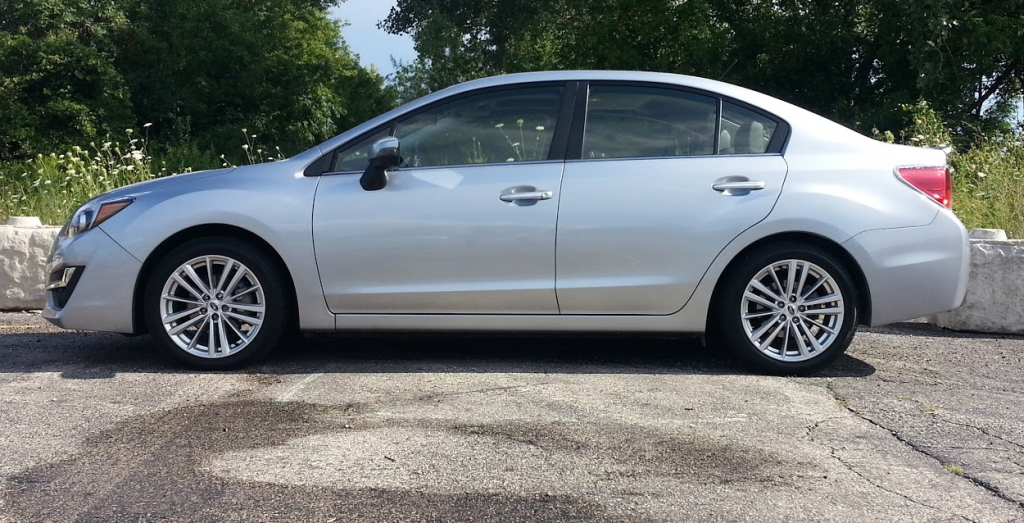 With AWD, automatic transmission, moonroof, and navigation system, we find our $25,885 test Impreza to be an especially strong value.