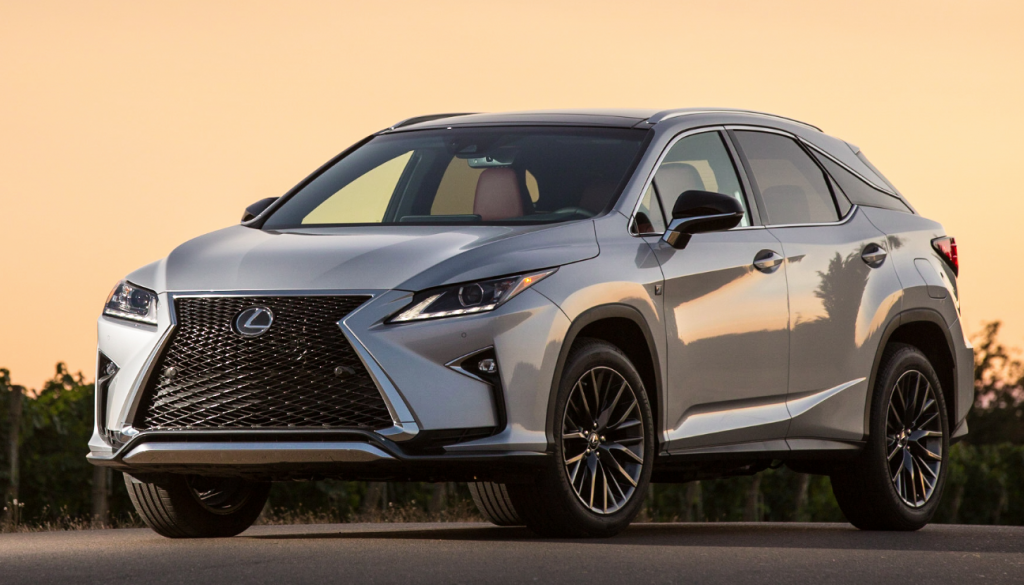 Lexus introduces the 4th generation of its venerable RX premium midsize crossover for 2016. It will be built in Canada and is expected to go on sale in November at a starting price just under $45,000. Shown is the sporty F Sport version, which can be distinguished by its “cheese grater” crosshatch grille.

Although midsize SUVs had been around since the 1980s, Lexus broke the mold in 1999 with the introduction of the first premium midsize SUV, the RX 300. Besides offering a degree of luxury previously unavailable in this size, the RX used car-like unibody construction (as opposed to truck-based body-on-frame) that brought with it a combination of ride and handling nothing else close to it could match.

Since then, the RX has gained a host of competitors and gone through three design generations, yet through it all, it has managed to remain one of the best-selling entries in the very competitive class.

For 2016, Lexus is introducing the 4th generation of the RX, giving it bolder styling, more power, and an expanded palette of features and colors. The new version is also significantly larger, gaining nearly 2 inches in wheelbase and 5 inches in overall length.

The current styling signature of Lexus centers around its “spindle” grille design, which now graces every vehicle in the lineup. The previous-generation RX adopted it over time, with the 2015 version hosting a prominent one bisected by a front-bumper bar.

The 2016 version isn’t really much larger but it is significantly more pronounced, primarily because the bumper bar has been removed to leave a gaping mouth that would do a Muskie proud.

And that’s just the beginning. Lexus said it was shooting for a more aggressive look (and a larger male audience) for the RX, which likely prompted the angular stance, deep body sculpting, and the most notable change, a “floating” rear roofline. Where the previous model was smooth the new one is cut, and it certainly looks to provide the brawnier appeal the company was seeking.

To that same end, powertrains have also been updated to improve performance in both the standard RX 350 and the hybrid RX 450h. Both are also offered in performance-oriented F Sport trim, which wasn’t previously available on the hybrid. 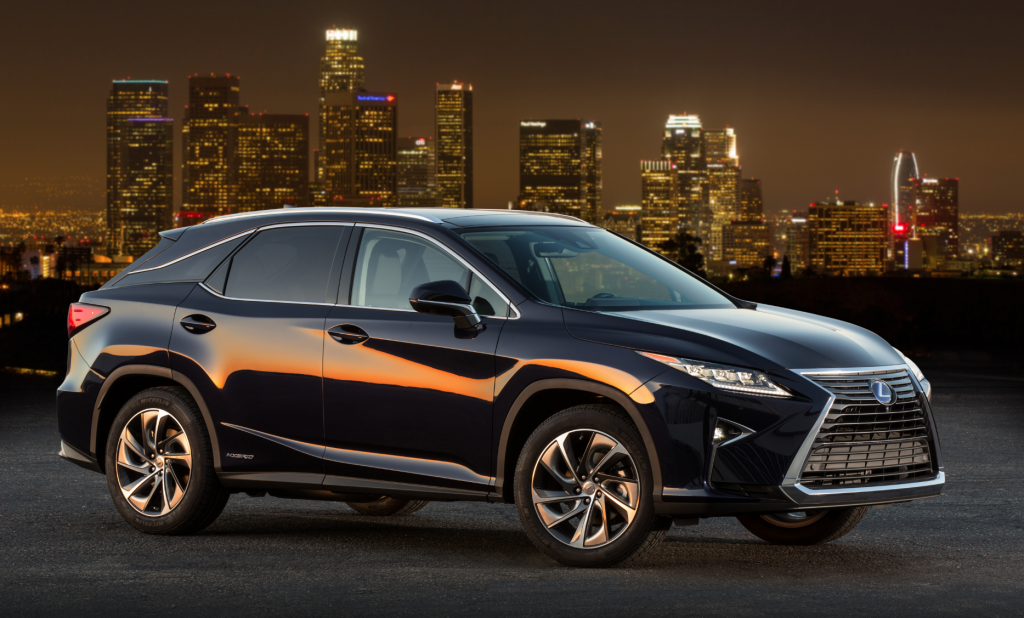 Although it still displaces the same 3.5 liters, the V6 has been boosted from 270 to 295 horsepower in the RX 350, and from 245 to 259 in the RX 450h hybrid, which now has a total system horsepower of 308 when the output of its electric motors is factored in. It can travel on electric power alone up to about 20 mph for a short distance as long as you don’t press hard on the gas pedal.

On gas models, the 8-speed automatic that used to come only on the F Sport is now standard in place of a 6-speed. Hybrids use a CVT automatic that functions much like a conventional automatic.

Lexus says front-drive versions of both models accelerate from 0-60 mph in 7.7 seconds, while AWD versions do it in 7.9. (The hybrid’s extra power is evidently sapped by nearly 400 lbs. of added weight.) Those are decent – though hardly stunning — numbers for the class.

The Hybrid, however, is more leisurely on full-throttle takeoffs, but it’s plenty spirited enough for normal driving. Stab the throttle while underway, and quick kickdowns are followed by a smooth flow of power. Suffice it to say that the RX 350 certainly feels sportier in this regard – and more in keeping with the company’s “aggressive” goal – while the Hybrid leans toward “gentlemanly.”

Not much rough pavement was encountered on our California preview route – and certainly nothing that would qualify as a bona fide Chicago pothole – so final evaluations of ride quality are best left until we try one on our home turf. But it seemed as though the RX soaked up bumps quite well, particularly considering most models were fitted with the available 20-inch wheels shod with low-profile tires, which typically hurt ride quality. Furthermore, we were surprised to find during a brief drive that one with the standard 18s didn’t seem to ride quite as well; usually the reverse is true.

What the route did afford was plenty of curves. These the RX took with ease and even what might be called “sporty finesse.” Most models tested were fitted with the available Drive Mode Select, which includes Eco, Normal, and Sport modes. Eco dulls throttle response and regulates the air conditioning for better fuel economy. Sport firms the suspension, quickens throttle reaction, and tightens the steering a bit, but we frankly didn’t notice much difference. An F Sport we drove had the available Adaptive Variable Suspension, which adds Sport S and Sport S+ modes. The biggest difference was noticed in Sport S+, which made the vehicle feel slightly more athletic in turns and quickened throttle response a bit, but also made the ride rather jiggly and the steering noticeably heavier. As in most such systems, Normal mode was the best all-around setting, which would make us shy away from either of the adjustable systems unless corner carving was of utmost concern. 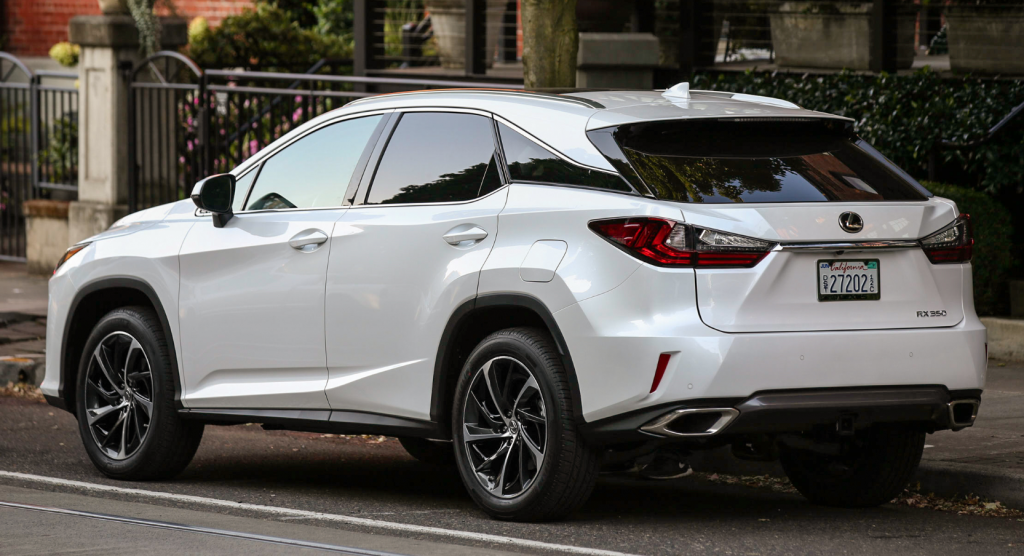 The new RX is nearly 5 inches longer than its predecessor and boasts sweeping creases and a “floating” rear roofline.

What stood out on all models tested was the quietness. Regular versions exhibited a bit of wind rush (seemingly coming off the outside mirrors) at highway speeds, but there was little road noise, and the engine produced only a muted growl under throttle. Except at very low speeds (when the gas engine typically isn’t running), the hybrid seemed to produce a mechanical whirring noise that made it a touch louder than the regular model.

While the RX is sporty enough to appeal to most folks, performance has never been the RX’s forte. Instead, it has made its mark on luxury, refinement, and feature availability, and these it continues to deliver in spades.

Any vehicle in the premium classes offers – either standard or optional – a host of features, and the RX is no different. So we’re going to focus here on what’s new or unusual and group them by category. Note that many in the Safety category aren’t that unusual, but we want you to know they’re available. 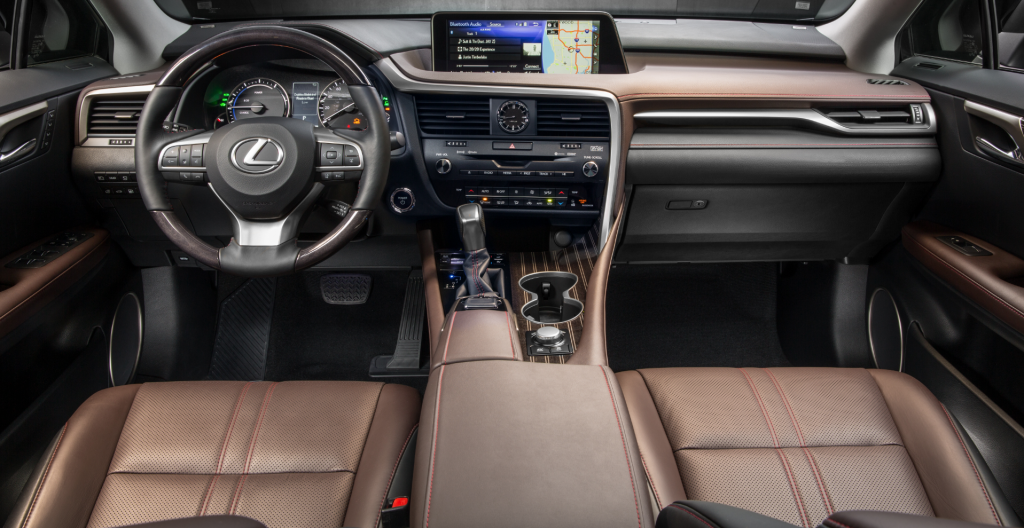 Inside, the RX has good – though not great – room for four folks, five in a pinch. Egress is easy due to a relatively low floor height and large door openings. 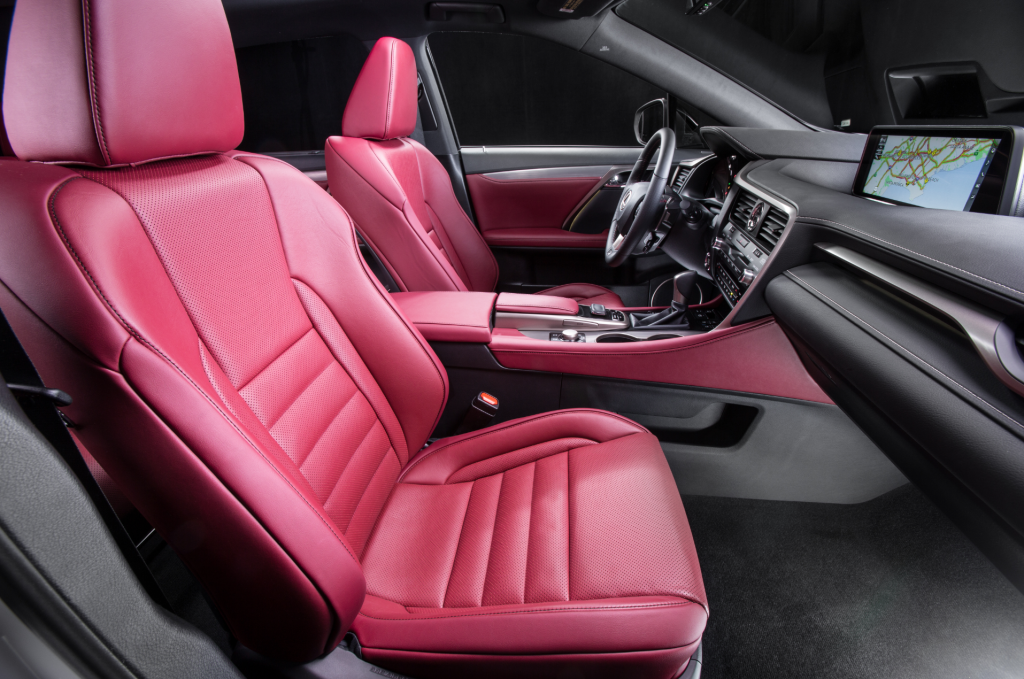 Unique to the F Sport is this available Rioja Red interior. Keep your sunglasses handy.

Materials looked to be of high quality and most surfaces were padded. The wide selection of colors and trim materials offered allow virtually any taste to be satisfied, whether leaning toward flashy, techy, or conservative.

Visibility is good to the left front, not quite as good to the right front (due to the angle of the roof pillar), good to the sides, but somewhat restricted to the rear despite the inclusion of little quarter windows. However, the 180-degree rearview camera really helps here, as it allows seeing both ways down a parking-lot aisle as you’re backing out of a space. Equally impressive is the available 180-dgree front camera, which allows you to see both ways down a street as you’re exiting an alley or between tall vehicles. We also really like the 360-degree cameras that include a curb-view selection.

We didn’t have an opportunity to test an RX with the base audio system; all the vehicles we drove had the available navigation system, which brings a console-mounted “mouse” control knob that moves a pointer on the dash screen to adjust audio, navigation, and some climate settings. 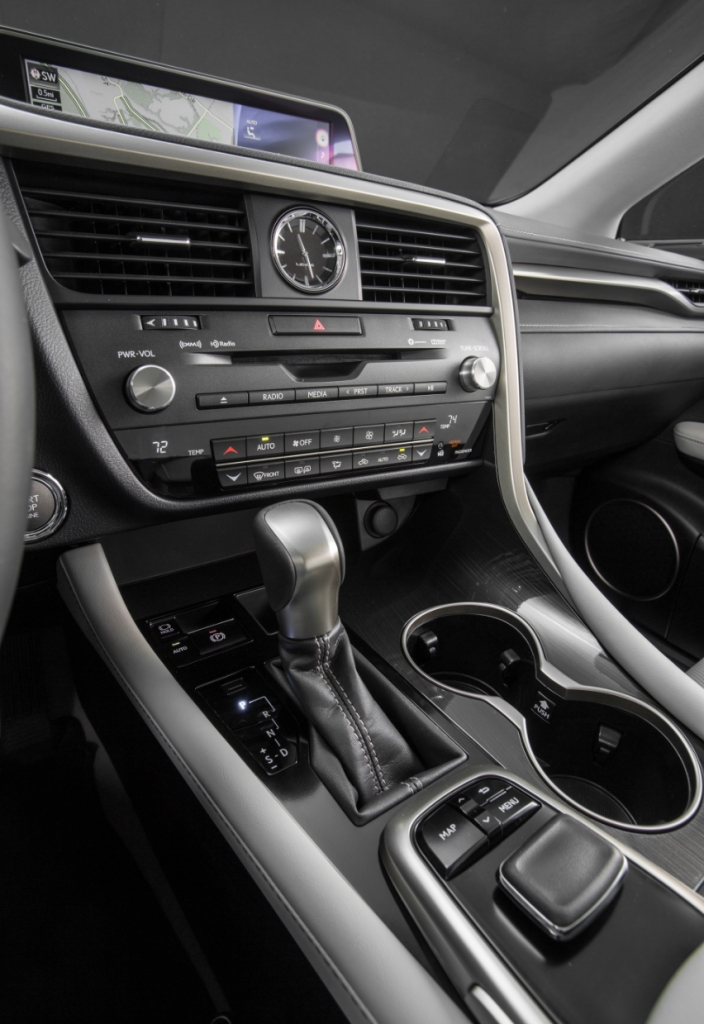 All models tested had the available navigation system, which comes with a console-mounted “mouse” control knob (rectangular knob at bottom right) to control a pointer on the dash screen. This one worked better than on previous models, but still isn’t a universal favorite.

In the past, some of our drivers (including me) haven’t cared much for this controller; it was too difficult to make it choose the selection you wanted, thus requiring a long look from the road to make what should be quick, simple adjustments. But this new version was better. The control knob was easier to move and the screen reactions to the movement were quicker, meaning you weren’t as likely to overshoot the selection you were trying to hit.

Climate controls were all repetitive-step pushbuttons – not our favorite due to the time it takes to make adjustments – and some of the controls were duplicated on the screen.

Storage space in back is on the small side for the class, but notable are the available power-folding 2nd-row seats (which fold nearly flat and level with the cargo floor) and automatic power liftgate, which can be opened by swiping your hand or elbow over the Lexus badge as long as the key is in your pocket or purse. There’s also a bit of storage under the cargo floor.

The Lexus RX has always been a great choice in the premium-midsize-SUV class, if not always the best value. And it now has to compete against many that offer more power, more room, and even a 3rd-row seat. While F Sport models lean toward the sporting side, the mainstream versions are fine overall performers with a high level of luxury and features available, all of which will likely keep the RX – quite rightfully – at the top of the segment sales heap.