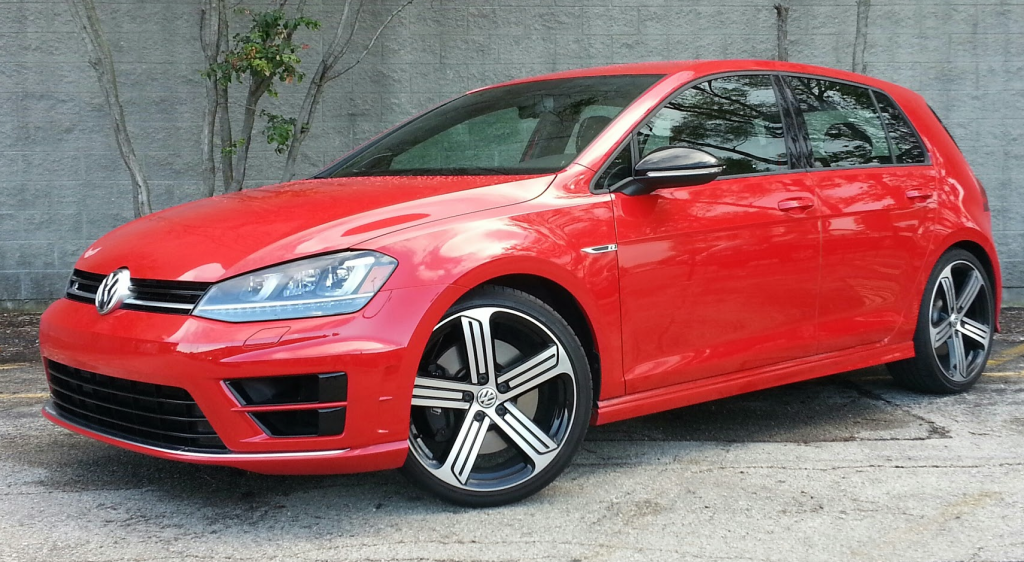 Consumer Guide’s test Golf R was a top-line model equipped with Dynamic Chassis Control (DCC) and a navigation system. Including the destination charge, our test car came to $39,910.

The great: An absolute delight to drive

The Good: Easy on the gas

The not so good: Modest turbo lag, pricey for a VW 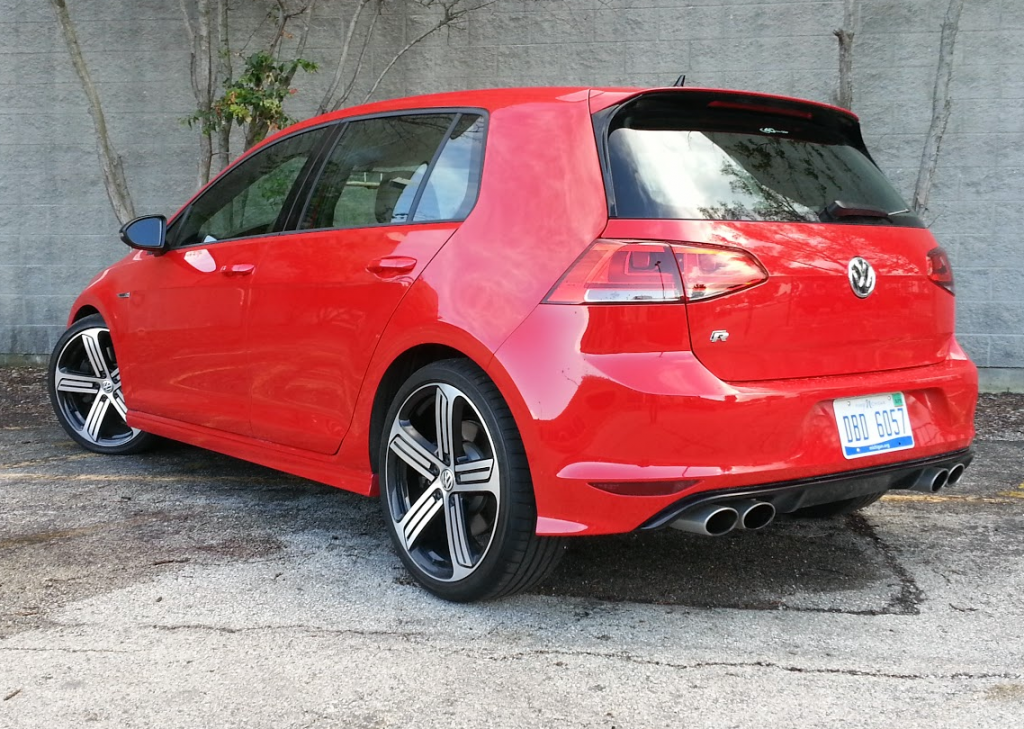 If the idea of spending almost $40,000 for a Volkswagen Golf seems completely crazy to you, then you won’t want to go anywhere near the Golf R. If the thought of handing over only $40,000 for a sports car and still getting some change back seems like a must-have bargain, then you should know that VW makes a rockin’ little thing called the Golf R.

A compact 4-door hatchback might not fit the common conception of a sports car, but if any hatchback comes close, it’s the R. A hard-charging (and cool sounding) turbocharged 4-cylinder engine, excellent handling, and a solid structure make for a sports-carlike experience for a party of up to 4.

All of this comes delivered for $39,910 when a Golf R is gifted with Dynamic Chassis Control (DCC) and navigation, as Consumer Guide®’s Tornado Red sample car was. If you can get by without those features, then you stand to save $2495 and still wind up with an R in your driveway.

DCC allows the driver to adjust the damping setting for a softer or firmer ride (there are 4 settings) via the touchscreen. Even in the standard setting, where this driver left it for his regular rounds of commuting, the car feels very connected to the road. Ride is firm, yes; there can be a little hop when hitting bumps; and the 235/35R19 summer tires send up some thrum at expressway speeds. With its low, wide stance and standard 4Motion permanent all-wheel drive working for it, the Golf R stays straight and even around bends, and just-right steering follows driver inputs to the letter. The operator’s sense of control is never in doubt. The disc brakes, with big vented rotors at all 4 corners, are right-now responsive. 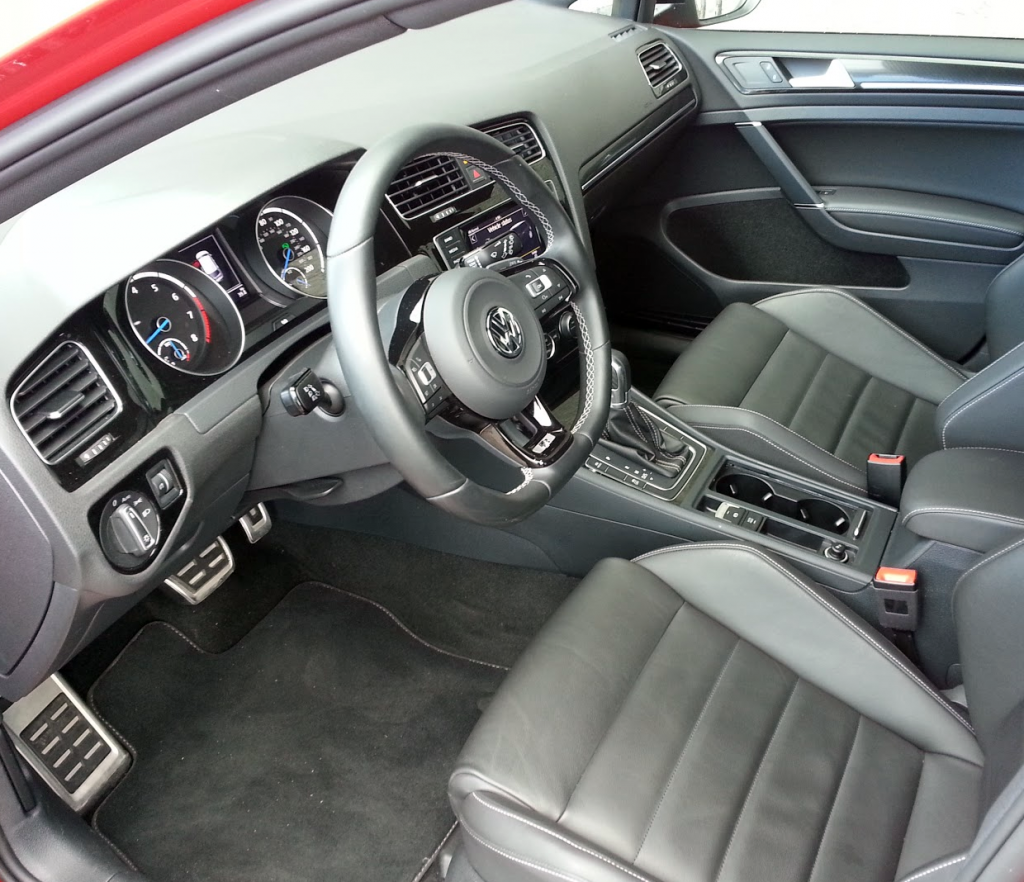 Output of the 2.0-liter dohc mill clocks in at 292 hp and 280 lb-ft of torque. Power delivery is generally excellent, though under pretty determined acceleration, say during an expressway pass, there’s perhaps a little more lag than we’re used to in some turbocharged cars these days. Then the R just jumps forward thrillingly and with a raucous snarl that escapes from the four chrome-tipped exhaust outlets. (Volkswagen claims 0-to-60 mph in 4.9 seconds.) The other half of the Golf R powerteam is a 6-speed twin-clutch automated-manual. Its shifts are pretty hard to miss when they happen. EPA-rated fuel mileage is 23 mpg city/30 mpg highway. This driver recorded a sound 29.4 in the wake of a 197-mile stint made up of 61 percent city-style driving.

Other Golf R standard features that facilitate the hot-rod-hatchback mission include a stability control system with a “Race” mode, an electronically locking differential, heated leather sport seats in front, and a leather-wrapped flat-bottom steering wheel. The multifunction display in the instrument cluster includes a lap timer. To help the R look the part, it has a model-specific bumper, grilles, air intakes, and body panels; alloy facings rest on the pedals.

There’s plenty of soft-touch stuff up front on the dash and doors, but rear door panels are hard plastic except for the leatherette arm rests. Storage pockets in all 4 doors are flocked. Seats provide good support and are nicely bolstered to hold passengers when things get a little racy. This is true in back, too. Leg and head room are good in front. Two adults will fit in back unless the front-seat occupants have to track far back. Then rear leg room pretty well disappears. If the back seat is occupied, passengers will find good head room. Big windows afford great visibility to the front and sides, with an unobstructed straight-back view through the large hatch window. 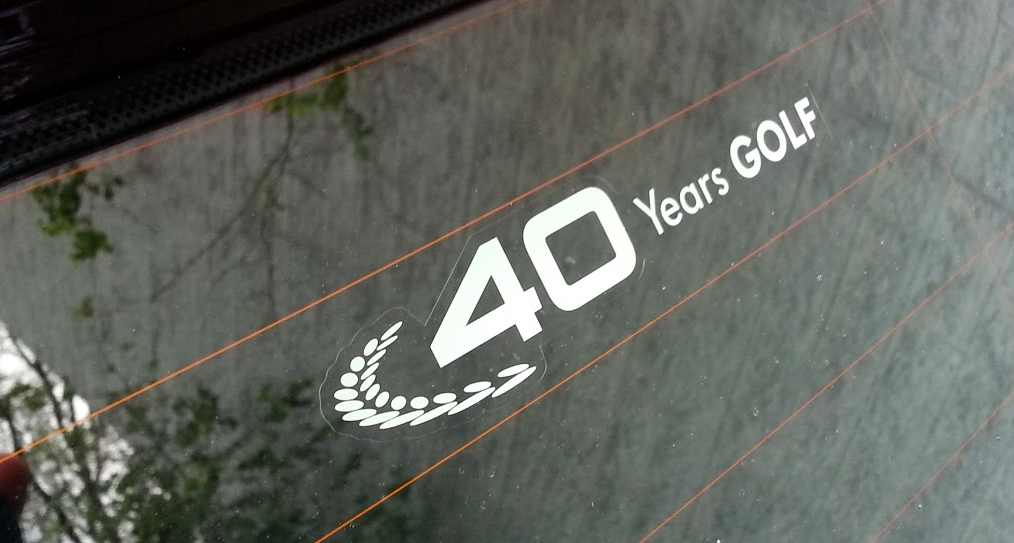 The Golf was introduced in Germany in 1974, and a year later as the Rabbit in the U.S. market. Since its introduction, VW has sold almost 30 million Golfs globally.

Storage for personal incidentals in front is handled by a sizeable glove box (with adjustable cooling), a small covered bin under the dash that also houses VW’s particular media-device interface, and the door pockets. The 2 cup holders in the console can be covered by a sliding top. Unlike other Golf models that CG has tested this year, there’s no console box in the R but an adjustable arm rest. (Note that when the arm rest is moved as far forward as it will go it rules out using at least 1 of the cup holders.) Rear passengers are served by smaller door pockets, pouches on the backs of the front seats, and a pull-down center arm rest (that doubles as a pass-through from the cargo bay) with 2 cup holders.

Rear cargo space isn’t especially generous, but it loads flat and will handle a week’s groceries or a couple travel bags. Some small items can fit under the floor in the foam tray that surrounds the spare tire, and in small bins at the back corners of the cargo area. There’s a power point back there, too. Rear 60/40-split seats fold almost flat for expanded cargo capacity when needed.

The R has the brains of a modern compact hatchback with the heart of sports car. If you’ve got the stomach for a $40,000 Golf, here’s your car. 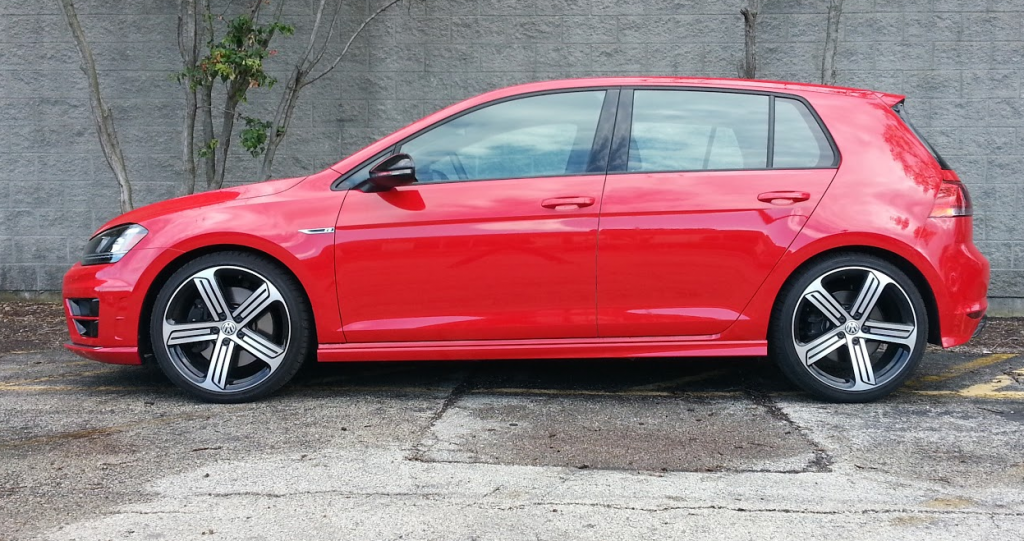 In base form (sans the navigation system and Dynamic Chassis Control), Golf R starts at $36,470.