The not so good: Rear seat back doesn’t fold

A short list of the more-obvious charms of the Toyota Avalon would include fine passenger room in a comfortable and quiet cabin, generous trunk space, and a composed ride. Oh, and don’t forget the availability of lots of features, provided that you’re willing to pay for them.

The latest Avalon that Consumer Guide® editors had the chance to try out was the 2015 XLE Touring with the V6, a short while after they drove a Hybrid XLE Premium. Among V6 models, the Touring ranks third from the bottom, with only the XLE Touring Sport Edition and the Limited priced above it. With a set of accessory floor mats, the XLE Touring test car came to $37,130 delivered. 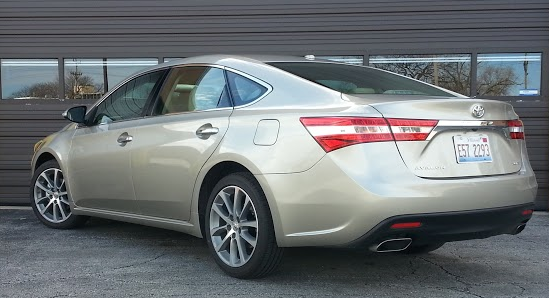 Avalon offers ample passenger and trunk space, though the rear seat doesn’t fold down to extend the latter into the former.

Of course, the prime difference between this Avalon and the last one that came CG’s way was the powertrain. The 3.5-liter dohc V6 generates 268 horsepower and 248 lb-ft of torque, power managed through a 6-speed automatic transmission. This combination delivers quiet, confident, and appropriate levels of power in just about any use short of going for Bonneville speed records—in other words, every-day driving. Console-mounted push buttons allow the driver to select “Normal,” “ECO,” or “Sport” driving modes. These are intended to alter the car’s operating characteristics (for instance, Sport mode increases throttle response and quickens the standard electric power steering), but switching between them this driver found the differences to be fairly subtle. As for fuel mileage, he averaged 23.59 mpg from a 158.5-mile trip. That was right up against the car’s EPA rating of 24 combined city/highway mpg (58 percent of this stint was under city conditions). Otherwise, the V6 Avalon is rated at 21 mpg in the city and 31 on the highway.

Beyond that, the test car was every inch the Avalon that any member of its family is meant to be. Rear seats are roomy enough to hold 3 adults in a pinch but quite welcoming for 2 with generous leg room. Doors open wide for easy ingress/egress, and drivers will find good over-the-shoulder visibility. Seats are comfortable and supportive; cabin décor makes ample use of soft-touch surfaces. 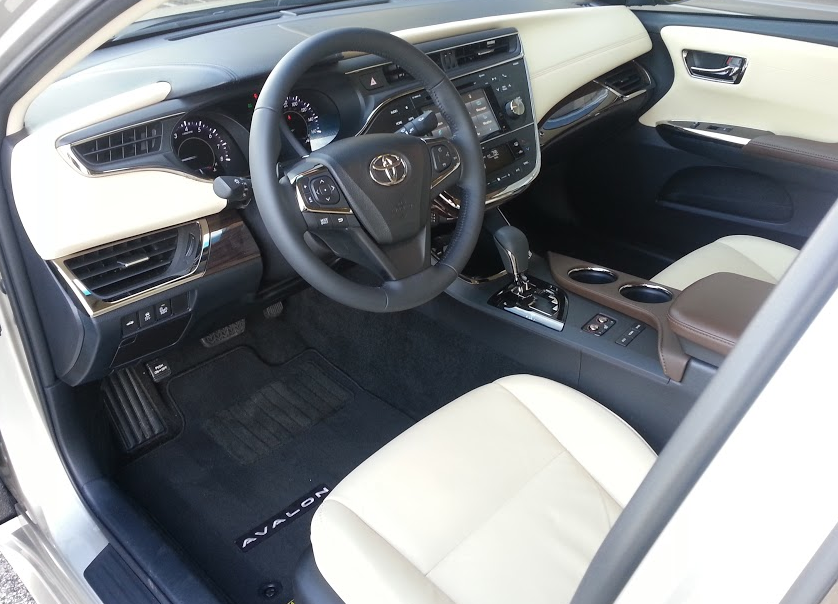 Some might wince at the light-colored seats (and how fast they’d get dirty), but you can’t accuse the Avalon’s tri-tone interior of being bland. The control layout eschews the current touchscreen trend, relying instead on traditional pushbuttons for many functions.

Electronic “Optitron” instrumentation includes a thin-film-transistor information display positioned between the tachometer and speedometer readouts, all of which are easily legible. The audio system doesn’t go out of its way to complicate programming and use. A voice-command request for a radio station was fulfilled a little slowly—but it did get done correctly on the first try. Climate controls, positioned below the audio/navigation display screen, rely on a number of buttons, including repetitive-touch buttons to set temperature. Seat-heater controls are 2 small rheostats that pop up from the console–both are positioned close to the driver, so the passenger will have to make an awkward reach. Auxiliary/USB ports are contained in a well with a sliding cover directly under the center of the dash.

Interior storage for front occupants consists of a low but wide glove box, decently sized door pockets, a large cubby with an adjustable tray under the console arm rest, and 2 open cup holders in the console. Rear passengers have access to door pockets, pouches on the back of both front seats, and 2 cup holders in the pull-down center arm rest. The trunk is quite big and easy-loading. Rear seats do not fold, but include a central pass-through.

If you need it, you can get more power or different desirable features elsewhere in this class. However, the Avalon’s mix of comfort and equipment at competitive prices makes it a must-see for anyone shopping in the large-car field.